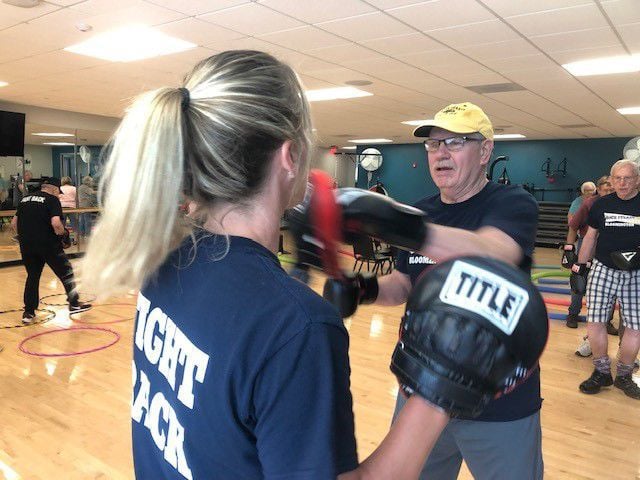 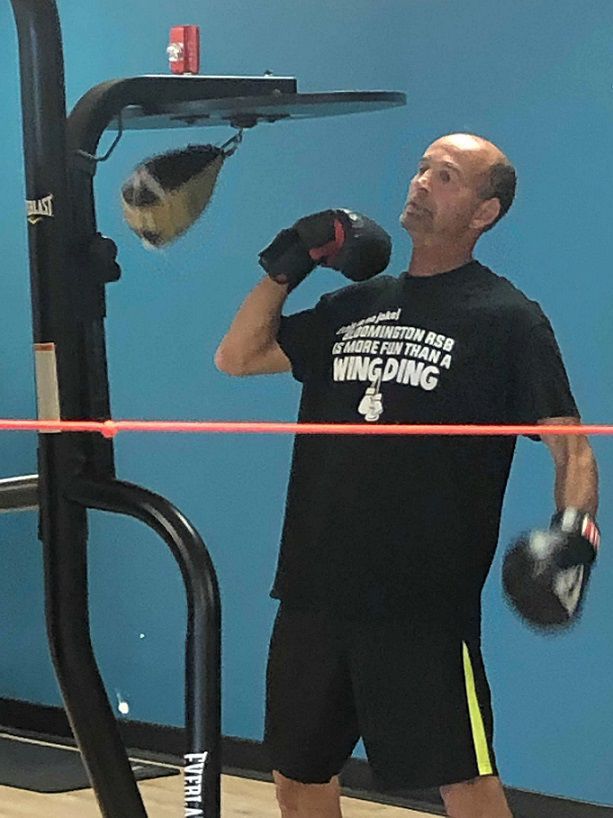 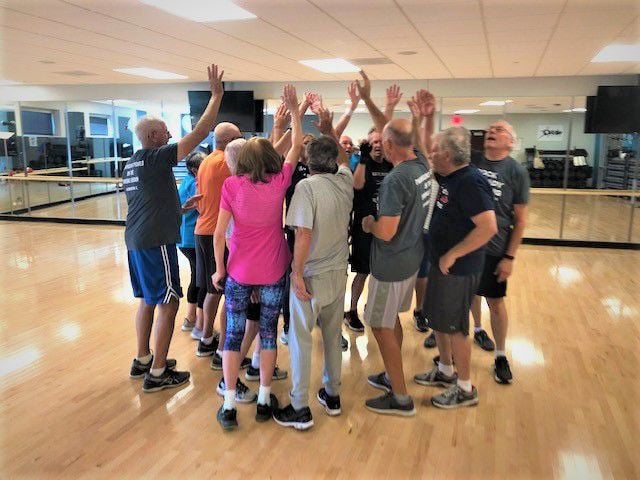 One group of Rock Steady boxers, celebrating the end of another session.

Along with husband Don, Sharon Maupin for 16 years ran the popular Maupin's Market in Saybrook. After selling it to explore other ventures, the Maupins moved around — to Decatur, to Peoria, to Eureka, even Rochester, N.Y., — before moving to Normal seven years ago to be nearer to their children, grandchildren and now great-grandchildren.

Then came this past April, a diagnosis at the doctor's, and yet something else Sharon now has undertaken:

At age 79, she's taken up boxing — not the grocery store kind, but the kind with fists and gloves.

"I just never thought I'd be a boxer," says Sharon, with a grin, and then a solid upper cut.

Gerry Sytar is a well-known guy. In the late 1960s, he was a star in multiple sports at Illinois State University. Once graduated, he landed a job in Unit 5 school district where for years he coached and was a driver's ed instructor, teaching hundreds how to parallel park and properly make turns.

Then a few months ago, now 71, Gerry felt a wave of dizziness. His eyes went glassy, his mind a bit fuzzy. He lost his balance. Because of occasional double-vision, Gerry can no longer do — drive — what he taught for years.

Instead he now boxes on Mondays and Wednesdays.

Bob Yoder is an auctioneer from Danvers. He's a successful caller who, when specifically asked to demonstrate, canstilltalkfast.

It was about five years ago when an auction attendee mentioned: "You're not talking as loudly as usual, Bob. Everything OK?"

No, was the eventual answer, from a neurologist.

An early sign of Parkinson's disease and its related ailments, known as Parkinsonism, is, in fact, a lowered voice.

But the Beggses — Don and Shirley — moved to B-N after his retirement to be closer to family and it wasn't long thereafter that Don got another shocker — early-stage Parkinson’s.

"In my wildest dreams, I never would have thought of boxing," says Beggs, 78. "But now that I'm in this class, it's clear the conditioning is helpful ... "

Maybe John Moses helped build your building. If not, you’ve probably seen the construction trucks — P.J. Hoerr Inc. — of which he is vice president and launched in the B-N area 25 years ago.

Before that, he grew up in rural Illinois, where pesticides can waft.

A lover of banjo, it was a half dozen years ago he noticed his left hand occasionally trembling.

That’s when exposure to pesticides, theorize his doctors, might have come back to roost, as it is common among many battling Parkinson's.

"I'm amazed how something like this (a boxing routine) can help," says Moses, 64, so enthusiastically that he says he'd one day give thought to starting a class on his own, wherever retirement takes him.

It was about five years ago that Molly Smeltzer, an enthused, energetic Bloomington woman who had never boxed, was watching “Dateline” on TV.

Featured was a new fitness program in Indianapolis called Rock Steady Boxing, based on a crazy notion that those of Parkinson’s or its interrelated relatives, could ease things by, of all things, boxing. In carrying out a regimen that includes punching bags, swinging fists, jumping rope, vigorously moving one’s core — "forced intense exercise" — users all while scream out exclamations across the fitness room — “Jab!” "Pull!" “Upper cut!” "Whew!" — to exercise speaking skills as well.

“Who would have ever believed something like this?” asks a smiling Rikki Messier, as she watches Molly, 37, fully accredited, lead one of her 75-minute boxing sessions — now up to eight a week — at the Advocate BroMenn Health and Fitness Center in Bloomington.

If there's an odd likeness here, it is that these people were and are success stories before they got here, that Parkinson's obviously doesn't pick on the weak, perhaps in fact just the opposite.

Among her class is Rikki Messier’s husband, Norman, 84, a longtime Air Force man who 50 years ago was fighting Viet Cong at the height of awfulness in the Vietnam War but today is instead fighting his own neurological system.

As Norman swings gloved fists into a bag, battling a disease that, to date, is incurable but can be "slowed" and "better managed," Molly continues to jump, leap, swing, kick up, laugh and lead a program that in less than three years has quietly swelled to 81 Parkinsonism boxers, ages 47 to 88.

“I get inspired by these people every day,” she says, and it shows.

Says Mitch Springer, 58, a Stanford farmer who joined at the suggestion of his neurologist: “My first class, I thought, ‘Man, she’s (Molly) wired today!’ Then I came to find out ... she’s like this ALL THE TIME! That’s why it’s so fun.”

“We have fun,” says Richard Smith, an accountant by career and yet another whose shirt now reads — “PARKINSON’S PICKED ON THE WRONG GROUP – Bloomington, IL. After awhile here, you begin to think that might even be true.

These folk are boxing, to fight back for a life they've so learned to love.

Dear Abby: When I was younger, I was engaged to a man I'll call "Jake." I was deeply in love with him, only to have my heart broken when he ch…

Dear Abby: My husband and I are 58 and getting ready to celebrate our first wedding anniversary. We knew each other in college, but were just …

Dear Abby: Sister is jealous of the happy life woman made for herself

Dear Abby: I married my husband 40 years ago. A few years later, he was diagnosed with diabetes. He refused to take care of himself and ended …

Dear Abby: I have been in a relationship with my boyfriend for a little over five months. We have enjoyed spending time with each other, but w…

Dear Abby: Stepmom goes a step too far claiming children as her own

Dear Abby: My former husband had an affair years ago, and when our divorce was final, he married the woman he was involved with. I'll call her…

Dear Abby: Newlywed is questioned about keeping her name

Dear Abby: I'm in my mid-30s and have just been married for the first time. I chose not to take my husband's last name for several reasons. I …

Dear Abby: Man has nonchalant attitude about locking up at night

Dear Abby: My husband has a bad habit of forgetting to lock up our house at night when he's the last one to come to bed. On nine occasions I h… 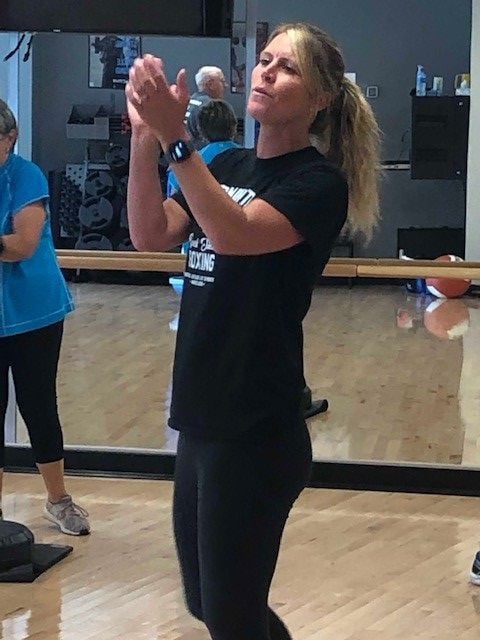 Molly, in motion ... as seemingly always. 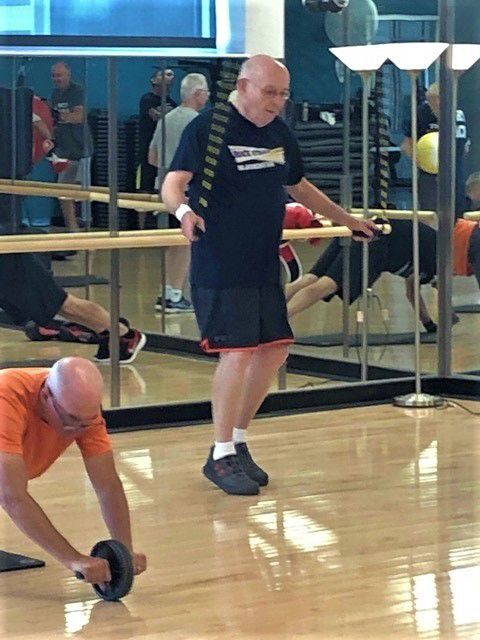 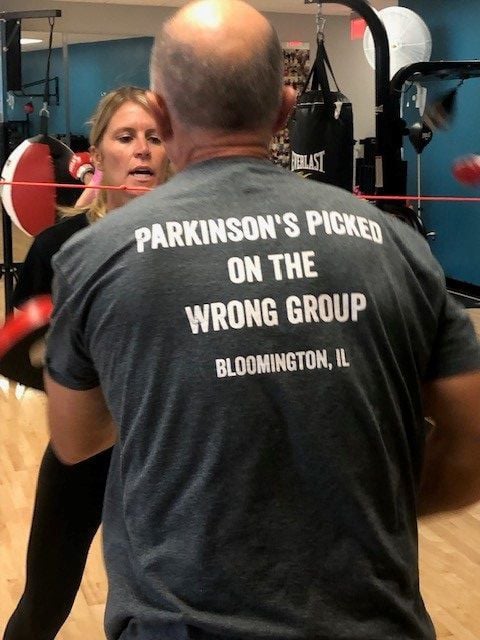 Fighting back: Who knew boxing might help slow a disease? Here, Terry "Mr. T" Johnson (everyone in the class has a boxing nickname) and Molly "spar."

One group of Rock Steady boxers, celebrating the end of another session.