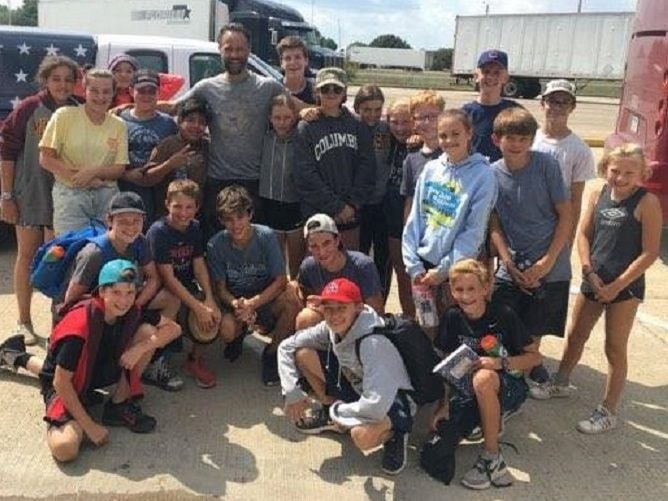 Kasey, and his "fans" from Minneapolis.

Kasey, in front of where he wants to be -- the White House. 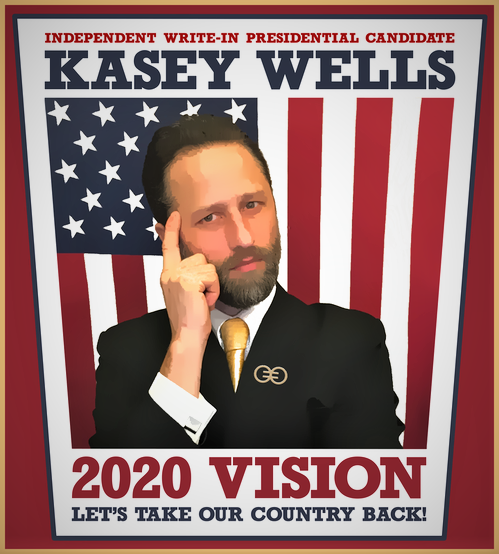 Kasey and his campaign poster. 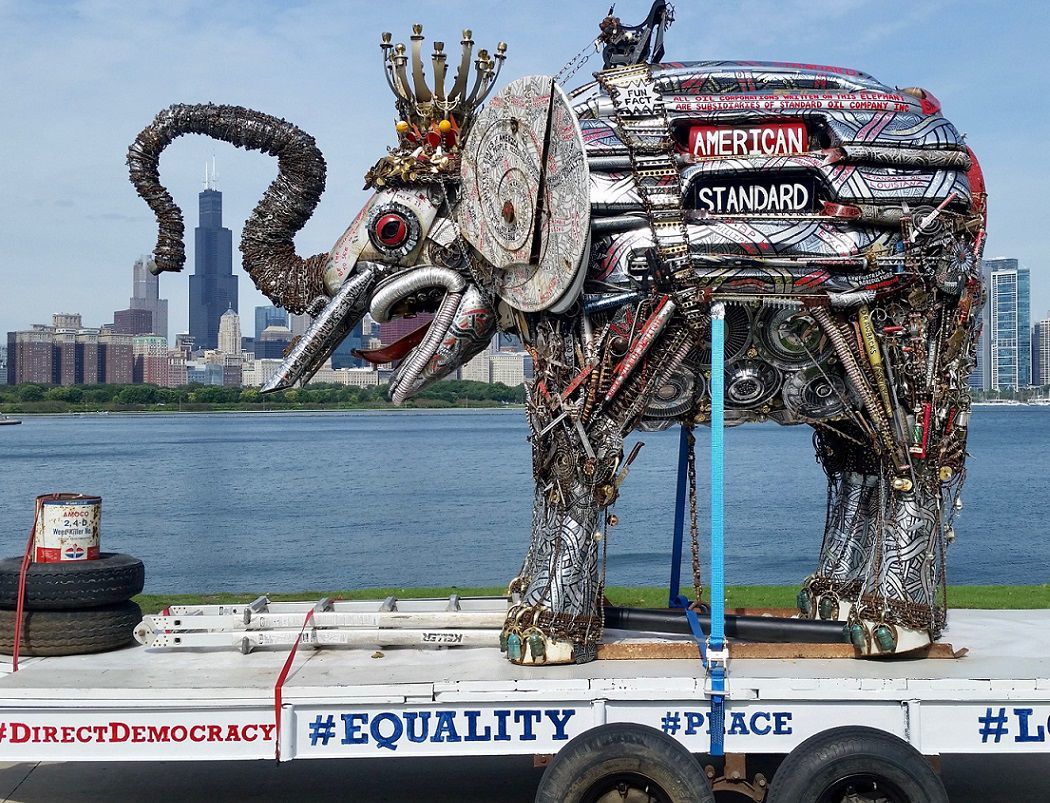 Kasey's elephant, on a campaign stop in Chicago, where the elephant's trunk encased Willis Tower. 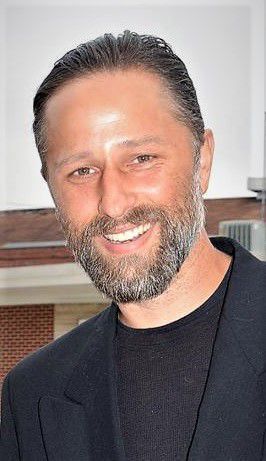 We all, of course, have life goals.

Own a nice home.

Make scads of money and see the world.

Kasey Wells, a scrap-metal artist who lives in Lexington?

At 41 years old — that age in which one is old enough to fully see the world and yet young enough to think he or she might still be able to help change it — Wells awakened one day and decided to act upon a "voice that had been in the back of my head” for years.

He says it since has changed his life. His travels across America, he says, have been ever so more fulfilling.

One experience was so uplifting — it involved meeting a group of 30 enthusiastic junior-high students from Minneapolis — it helped elevate 2019 into “the most blessed year of my life.”

Kasey Wells, a scrap-metal artist who lives in Lexington?

He is running for president.

Of the United States.

He has filed all the papers with the Federal Election Commission.

He has a “platform” to overcome what he believes 240 years has undone to our forefathers' original concept of America.

And Wells has one other thing:

“I certainly don’t have the money or resources (of others),” he says. “So I’m going at it the old-fashioned way — traveling around, talking to people face to face.”

At the center of Wells' rather quixotic campaign is a piece of his own scrap art.

He calls it his “running mate.”

It is a self-made, 11-foot-tall scrap-metal elephant — an old Standard Oil fuel tank, hubcaps, a basketball backboard, 10 chrome vehicle bumpers, 77 door knobs, 20 tailpipes and much more, all welded into a fascinating configuration — that he is hauling across America. “I want to take back our country from the private interests — the elephant in the room — and return it to the public,” he says.

His elephant — all one ton of it — can also draw a crowd in a room, or at least a street.

“I think just about everyone is amazed at his `junk’ art,” says Don Cavallini, a retired Lexington teacher and former McLean County Board member who caught up with the Wells' campaign when Kasey recently stopped by the Community Center in Lexington.

“I told him his odds aren't good," ” adds Cavallini, "but if he kept a log and diary, he may have the makings of a unique book.”

Wells has campaigned in at least 15 Illinois cities, from Chicago to St. Elmo, a town near Effingham where he spent his childhood. He's tooled cities in Indiana — Indianapolis, Terre Haute, Batesville, among them — as well as more than 25 stops in Michigan, Ohio, Massachusetts, Pennsylvania, New York and Connecticut.

He’s campaigned with his elephant inside Times Square in New York City.

He’s parked it across from the Statue of Liberty.

In Washington, D.C., in what he calls “one of my most heartwarming encounters,” he met a homeless woman who became “my campaign manager for a day and took me to the White House, jumped out of my truck and got a picture of me in front of the White House while I illegally parked in the middle of the intersection.”

His campaign financing is meager — he’s primarily using the $3,500 his elephant won as “Best of Show” and “People’s Choice” on his campaign’s first stop, at an art sculpture show in Lenoir, N.C.

His biggest supporters are, no doubt, his wife, Rachel (“I know this is something that in his heart he feels he must do"), and his mom, Linda. And God. “My ultimate goal is to bring us back to respecting God’s work and bring balance back to the Earth … politically, economically and ecologically,” he says.

A guy whose life, sadly, also has been touched by tragedy — when younger, he and his family were on a camping trip in Missouri when a sister fell from a cliff on a hiking expedition and died; a few years after that, he then also had a brother who was the victim of a murder — some suggest Wells' past may be a "reason" for his current presidential run, to "make peace, fill holes, ease soul-searching and try in his own way to make the world a better place" and he is indeed now finding joy.

"On one stop, near Indianapolis," he says, "I pulled off at a rest stop in hopes of meeting people. As I pulled in, I saw a tour bus and bunch of kids playing in the picnic area, and as soon as I got out of my truck, one kid approached me. We started talking ... a minute later, about eight kids were in front of me ... two minutes later, I had the attention of the whole class ... about 30 junior-high kids. They began hammering me with questions —  ‘What are you going to do about climate change?’ ‘What are your policies on immigration?’ ‘What will you do about plastics?'

"They were SO excited, many shook my hand and wanted to get a picture with me, and they asked me to come to their school in Minneapolis to give a speech, and said they were going to tell their parents to vote for me. As they walked  back to their bus, they began chanting `KASEY! KASEY! KASEY!’ It was so awesome and so uplifting ... it brings a tear to my eye just thinking about it ...”

A folly, this campaign? Some would say that. Idealistic? A "yes" no doubt there, too.

But Kasey Wells? In many ways, he's already won.

Kasey, and his "fans" from Minneapolis.

Kasey, in front of where he wants to be -- the White House.

Kasey and his campaign poster.

Kasey's elephant, on a campaign stop in Chicago, where the elephant's trunk encased Willis Tower.