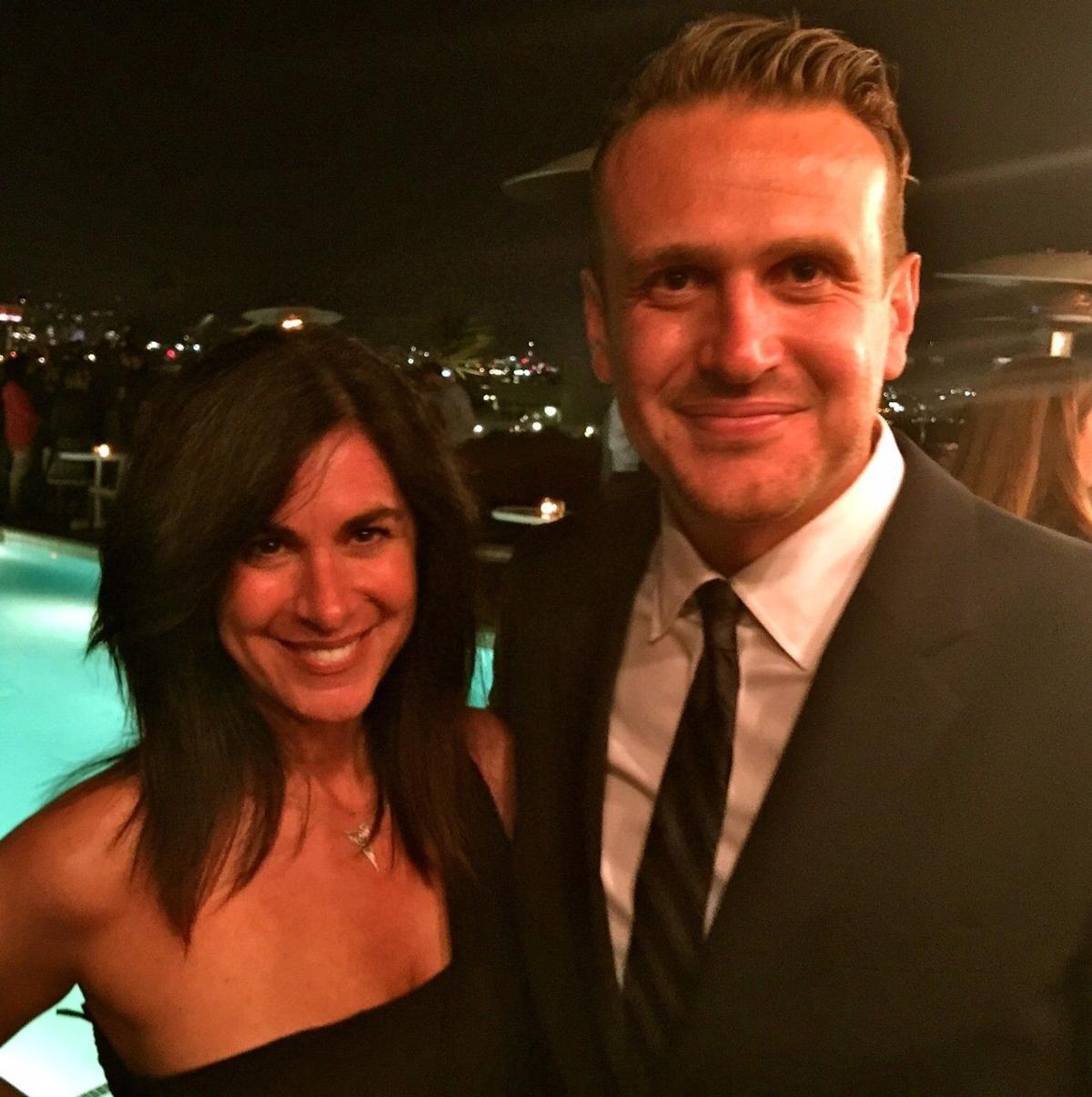 Kymberly Harris, David Foster Wallace's former girlfriend, and actor Jason Segel at the Los Angeles premiere of "The End of the Tour." 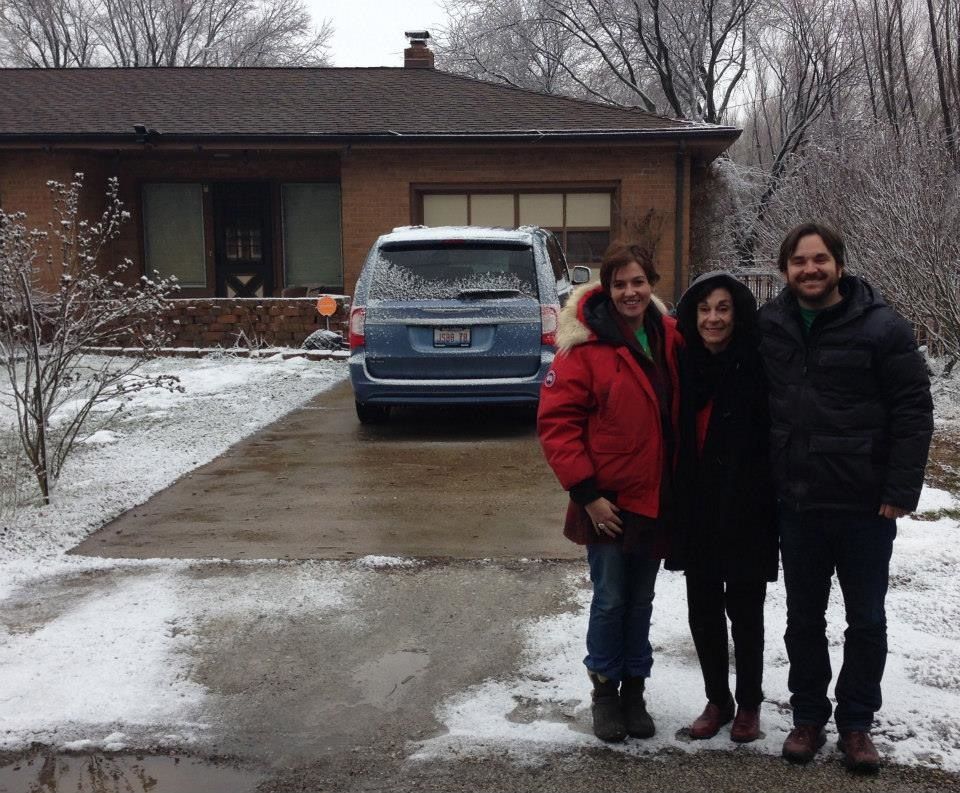 "The End of the Tour" director James Ponsoldt, right, and co-producer Louise Lovegrove, left, with B-N's Victoria Harris, in front of David Foster Wallace's former house in Bloomington back in December 2013. Ponsoldt and Lovegrove stayed with the Harrises for a week to do research for the movie.

Although lacking in any edge-o'-your-chair excitement, car chases or Tom Cruise on another mission, it's a thoughtful "buddy" movie about two writers learning about each other's perspective on success, an hour and 54 minutes that critics seem to especially like.

A few are even whispering "Oscar."

“The End Of The Tour” is about David Foster Wallace, the Illinois State University associate professor who so played under the radar while living in Bloomington–Normal in the 1990s that — except for fellow English profs, his students and his AA group — few had any idea we had a future world celebrity in our midst.

You could have sat next to him at a B-N McDonald’s or Monical’s Pizza, both portrayed in the movie, and never have known it. Rumpled, he wore tousled jeans, well-used Doc Martens and a constant bandanna over scruffy hair.

It opens in B–N on Aug. 21, at the Wehrenberg Galaxy 14 on Bloomington's west edge, only a few miles from where Wallace lived and wrote his world-acclaimed novel, "Infinite Jest."

We've seen it and here’s our spin:

It will get Jason Segel, of "How I Met Your Mother" sitcom fame, critical notice. Although his portrayal lacks the tortured, darker side that those who personally knew Wallace will refer, he handles the scripted role well.

Nicely edited with a decent soundtrack, Alanis Morissette will love it.

And Bloomington–Normal as its backdrop? Will it be happy?

To begin with, even if the movie spends at least half of its time at Wallace's modest ranch home on Bloomington's south side (307 S. Woodrig Road, for future trivia nuts), it's not really B-N. Because the tax breaks are better in Michigan, it was shot in the Grand Rapids area and made to mimic the Twin Cities.

While one scene looks like College Avenue, another scene — of the alleged B–N skyline — flatters us as Grand Rapids, a larger city (188,000 population).

A bit big-city-arrogant in its view, the movie pokes a little fun at us, too.

Although ISU is, in fact, a large university (more than 20,000 students), the movie opens at Rolling Stone magazine offices in Manhattan where editors talk about Wallace and refer to him as "teaching at some small university in Illinois," not even mentioning ISU by name.

At another point, because of our small-town feel, Wallace refers to having to settle for "cheesy Bloomington radio" as entertainment.

In another moment — a funny one that draws a laugh — actor Jesse Eisenberg's character (he's visiting Wallace in B-N) asks Wallace if they might "go some place nice to eat" in Bloomington.

The next scene shows them at McDonald's. (A "simple-life" kind of guy, Wallace, in fact, loved McDonald's as well as Monical's Pizza. One of his books is dedicated to the waitresses at the Denny's on Oakland Avenue)

But the movie also flatters us.

It mentions the Mitsubishi auto plant, all of our "insurance people" and has a moment where we see a cardinal-red decal of Reggie Redbird stuck on Wallace's refrigerator door. Instead of deferring to our lack of mountains and ocean, as some films might, it makes the snow-swept Central Illinois landscape of harvested corn and bean fields in winter beautiful, almost romantic. It glamorizes the sounds we make trudging through snow in the nighttime cold.

It also shows Wallace at perhaps his happiest moments (after leaving Bloomington–Normal in 2002, he committed suicide in California in 2008, at the age of 46), possibly because of the calm and contentment he found here.

In the movie credits are the names of those who helped in its making —  among them, Charles Harris, the ISU English department head who hired Wallace, his wife Victoria (now a McLean County board member) and their daughter, Kymberly, a life/love interest of Wallace's in his days here.

Also in the credits: the names of actors who played "ISU Student 1; ISU Student 2," etc. (if only they could have hired actual ISU students to be themselves).

The movie is getting good reviews. Last week, USA Today called it "possibly the surprise film of 2015." The New York Times gave it three stars.

The Wall Street Journal especially loves it ... except that in its review, it also claims the film follows the characters "from Wallace's suburban house in Bloomington, Ind., across a snowy landscape to Minneapolis and into the Mall of America."

Infinitely, we do not jest.

But it's a pleasant movie and, in Bloomington–Normal’s own case, offers us a chance to see a hugely famous local guy who most didn't even know was here.

In the ultimate of coincidences, there's nothing small town about that.

Flick: When a robber misplaces his car keys

And now, to prove again that the greatest of all comedies in life is still life itself, we proudly present another installment of News Is Stra…

Flick: One dead tree ... it's beautiful

Ash to ash, but not dust: One of the saddest stories of the time is surely the tragedy that in Bloomington-Normal alone already has killed thousands.

Flick: Oh no! Dropping the soap in the shower!

FLICK FLAK, random thoughts on Tom Cruise's missions, erectile dysfunction ads, getting tired of your tattoo and other such life obsessions:

Today he is Daniel Lloyd, 43, father of four, the youngest at nine months.

Editor's note: Flick is on vacation. This column first appeared in 2015.

We all learn inside tips or little factoids about where we work.

10 notable people from B-N you should know

Inspired by David Foster Wallace and the newly released movie about his life, here's a list of other people who have made their mark with ties…

The 24 most unique town names in Illinois

We've got nothing but love for peculiar town names. Here are 24 Illinois communities with rather interesting names.

Kymberly Harris, David Foster Wallace's former girlfriend, and actor Jason Segel at the Los Angeles premiere of "The End of the Tour."

"The End of the Tour" director James Ponsoldt, right, and co-producer Louise Lovegrove, left, with B-N's Victoria Harris, in front of David Foster Wallace's former house in Bloomington back in December 2013. Ponsoldt and Lovegrove stayed with the Harrises for a week to do research for the movie.