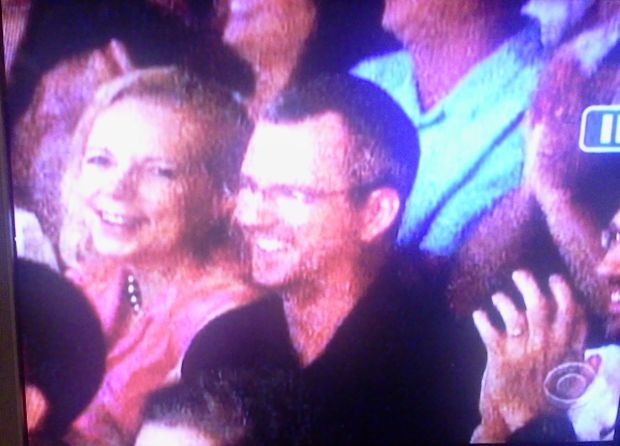 A screen shot of Sarah and Scott, cajoling with David Letterman on his show Monday evening. 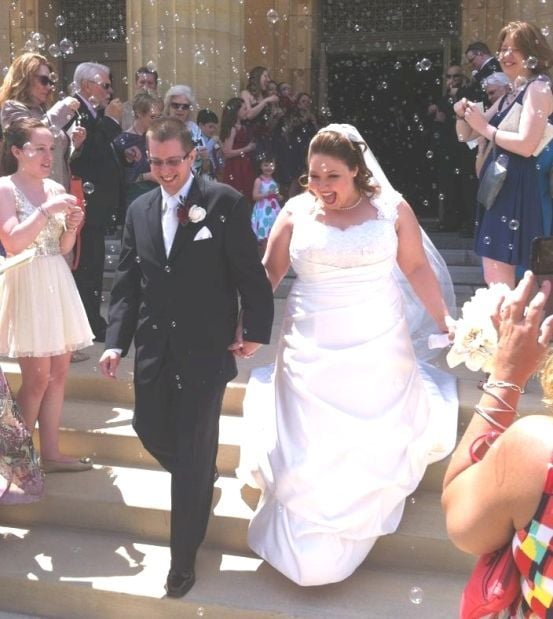 Lauren Marie Vala is looking like a "female" bride at her wedding to Stuart Palmer in Springfield in late June.

B-N pair on Letterman show: If watching the David Letterman Show Monday night, you might have seen Dave walk out and instantly announce to the world — “Hi. My name is Dave Todd Scott Letterman” — and suggest then it’s been so hot in New York City, he’s mulling — and we’re quoting here — “a move to Bloomington, Illinois.”

In vintage comedic Letterman form, the segment made little sense to anyone but those in the studio audience … and Scott Sober, of Bloomington, and his wife, Sarah Jacobs, and Scott’s brother, Jim, from Boulder, Colo.

They were attending a Letterman taping at The Ed Sullivan Theater in NYC — middle, row three.

As talk-show hosts are wont to do, Letterman stepped out moments before the afternoon taping to meet the audience and struck up a chat with Sober, wondering if he’d ever gone by “Todd” since “Scott,” said Letterman, is “so close to Todd.”

Interestingly, during the pre-session with the audience, Sober says Letterman announced he knew “where Bloomington, Ind., was” but not Bloomington, Ill., and asked if it was near Chicago.

That still didn’t help Letterman — until, that is, one of them also announced, “Bloomington is next to Normal.”

“Ohhhh!” Letterman replied. “Well, I know where Normal is!”

Interestingly then, the following night on Letterman, the musical guest was Pokey LaFarge, a budding, burgeoning 29-year-old musician/singer.

For the unknowing, Pokey is actually from Normal. Twelve years ago, before undergoing a full-fledged career, Pokey was also known as Drew Heissler, University High School Class of ’01.

As mulled by Sandy Lietz, of Bloomington:

“Do the people who do all the shooting really care if there’s a concealed carry law or not? What difference will the new law make for them? They don't care either way!”

Rules are rules, even if a little silly: You’d certainly say it’s been an eventful summer for Lauren Marie Vala.

A 26-year-old in facilities management at Illinois State University, first she got married.

Thus she’s settling in to all that fresh wedlock entails.

And then the other day, when she went into the Social Security office to update her file and change over to her married name, she discovered something else.

At least, that’s how Social Security files have read, apparently since Lauren applied as a teen.

"If you look at me, you'll see I am obviously not a man,” declares Lauren. But here’s maybe the most humorous part:

Rather than simply declare — or even just observe — that your sex is incorrect on your Social Security card, for security reasons, the rules with Social Security folk are that Lauren must now prove she is actually a woman.

She’s being asked to bring in her birth certificate, to prove that 26 years ago her mom’s doctor checked “female.”

They say, of course, that wedded bliss can really change a person … but can anything top Lauren's story?

Or is she Loren now?

Boomin’ Dunkin: Sounds as if the new Dunkin Donuts on North Main, near Raab, is doing a nice launch.

One morning this week — it opened July 11 — Jim Dodson of Bloomington was pulling in at 9:30 to get some glazed doughnuts.

Unfortunately, for Dodson at least, they were already sold out.

“He was so upset,” laughs his wife, Diane. “He was ready to call the Pantagraph, the radio stations, probably the FBI!”

Bill Flick is at flick@pantagraph.com

A screen shot of Sarah and Scott, cajoling with David Letterman on his show Monday evening.

Lauren Marie Vala is looking like a "female" bride at her wedding to Stuart Palmer in Springfield in late June.