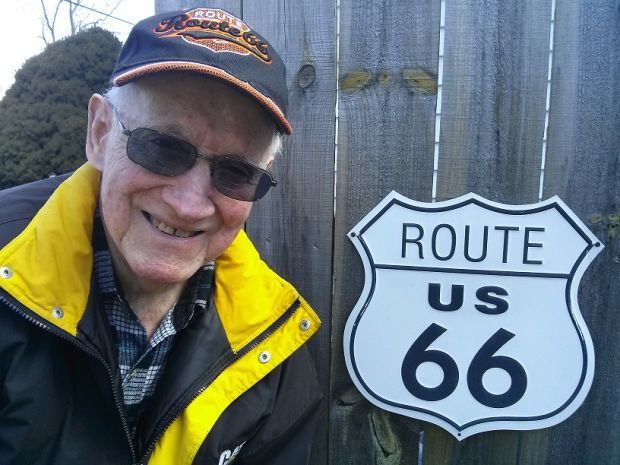 Chester Henry, who written about 50,000 speeding tickets, is shown next to a sign marking his home away from home. Henry has been commemorated in plaques and halls of fame for his efforts. 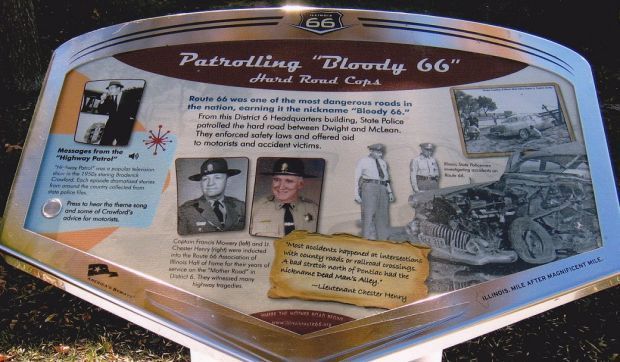 A plaque in Pontiac commemorates Chester's servitude to the area and speeders.

In a world fascinated with large numbers and big accomplishments, no one may ever top Chester Henry.

There are plaques commemorating him, three in the Pontiac area alone.

A marker on the square in downtown Bloomington honors him.

He is a member of two Illinois halls of fame.

Now 82 and fully retired, living out a rather quiet life in LeRoy with his wife, Nellie, the parents of five grown children, he remains an inspiration, particularly to those in his line of work.

Chester Henry is one of the greatest writers of all time — of speeding tickets.

Once, on the day before Thanksgiving, one of a year's heaviest for travel, he wrote 45 tickets in one shift. "We didn't go eat till after dark that day," he chuckles.

In a career that spanned 28 years (1957-84) as an Illinois State trooper based in Pontiac and patrolling U.S. Route 66 (today's Interstate 55) from Dwight to Atlanta, if you do the math, Chester walked the equivalent of nearly 150 miles covering the distance from his squad car to the front window of the vehicles he pulled over.

Some ticket-writing days were so busy as he and his partner for many years, Everitt Bane, patrolled this wing of America's “Mother Road,” Chester says they’d pre-fill out parts of their speeding tickets — date, location, patrol-unit numbers — so they didn’t have to waste valuable get-speeders time.

Keep in mind, such numbers and pursuance of the heavy-right-footed is not a matter of egotistic boasting or a guy simply being Mean Mister State Trooper Man either.

Patrolling a stretch of asphalt that was so accident-marred in the post-war dawn of the super highway that it became known in this area as "Bloody 66," a key part of Chester's job was simply this: cut down on death by trying to curb the speed-demons who were taking kindly to the new, wider, smoother, more open roads.

“We didn't waste much time on motorists who were only going 10 (mph) over,” says Chester. “There was enough traffic out there that we could wait for the better ones.”

Cruising along Route 66 in a black-and-white cruiser topped with a big red bubble light, Henry worked in a different era, too.

Until the '70s, highways like Route 66 cut through hundreds of small towns, wedged amid a patchwork of family-owned gas stations, diners and Howard Johnsons.

Highways, Chester says, were a much more personal, friendly place. He knew all the great places to dine, sleep, take a break and he told anyone who asked.

In a way, he was like a Route 66 lifeguard — friendly, helpful but also stern and mindful.

“Everything went up and down the road,” says Chester, “but it was always the people that made the work enjoyable.”

In a time, too, when stoplight-loaded, two-lane strips were being replaced by four-lane highways ripe for higher speeds, he also lived by his orders and oath — to teach motorists the highway is a wonderful place but comes with restraint, too.

Chester and Everitt, he will tell you, got inventive. Radar was used to measure speed in the '50s, '60s and '70s, but was much more cumbersome. Police had to store the radar device in the trunk.

So, to make the process quicker and more proficient at ticket production, he and Bane "improvised" and had special steel posts on which to hang the radar, with a 100-foot cord trailing back to the squad car on the side of the road. One of them would work radar and the other sat up ahead.

“It was all on the up-and-up, but we were inventive,” says Chester. "We did some things everyone didn’t do.”

Along the way, in 28 years of patrolling the only open road between St. Louis and Chicago, he naturally became somewhat famous with the famous, pulling over any number of celebs, well-to-do's, Springfield legislators and sporting greats on their way to the next game or event — all of whom, he says, were treated with the same Chester Henry grace and fairness.

They all got a ticket. “I never asked for an autograph, but I gave them mine,” he chuckles.

And so it goes for Chester. Some 30 years removed from his patrol duties, with Everitt Bane out on the even bigger "Mother Road" (he passed in 2013), Chester says he still likes to go out and drive his old patrol. There, he says he occasionally becomes a bit testy when he sees something he doesn’t like — like someone passing in a no-pass zone or zooming past him on the right.

“There are times,” he says, “when I still wish I had that red light on top.”

Yes, after a lifetime and livelihood of such, for Chester Henry, you might just say, that’s the ticket.

Chester Henry, who written about 50,000 speeding tickets, is shown next to a sign marking his home away from home. Henry has been commemorated in plaques and halls of fame for his efforts.

A plaque in Pontiac commemorates Chester's servitude to the area and speeders.