BLOOMINGTON — The tour might not make much sense without its lead storyteller, Buck Farley.

“The roller skating story is interesting,” he said, stopping in front of a pair of used white skates.

“In 1939, they were trying to find a new way to increase the efficiency of mail delivery in the downtown Bloomington headquarters," he continued. "So, we had our mail carriers wear roller skates and although it did increase mail delivery greatly, we had too many concerns about employees and ended up deciding it was too much of a liability. So we ended that process.”

The skates are among millions of items stored in the Heritage Unit at State Farm Corporate Headquarters, telling a unique blend of stories, memories, ideas and even some failures, each with its own distinctive tie to State Farm.

“These items represent the people who have made State Farm what it is today,” he said.

A time capsule has been retrieved from the former headquarters building in downtown Bloomington and it will be opened at some point in the near future. An unnamed buyer has a pending purchase for the downtown building, which has been empty for several years.

“I’m pretty anxious to see (the time capsule),” Farley said. “We have some idea of what is in it because we have found some lists, but time capsules have a way of holding some surprises, as well.”

Changing with the times

A former archaeologist, Farley has been with State Farm for 15 years. The Illinois State University graduate had plans to be a history teacher, but archaeology jobs were at a premium. Instead, he caught a break with State Farm and began working in claims, eyeing the possibility of working with the Heritage Unit.

He got that chance five years ago, when he was named archivist. He's now in charge of the Heritage Unit, which has an estimated 60,000 unique objects, millions of photos, and audio and video recordings.

"Buck really knows his stuff," said Bill Kemp, a librarian at the McLean County Museum of History in downtown Bloomington. "It is vitally important for large employers to house their own archives and historic memories, if they are able. When you have something like State Farm, which has been one of McLean County's most important employers for nearly a century, it is a tremendous asset to the community. "

Retired farmer George Mecherle founded State Farm in 1922 in Bloomington as a mutual automobile insurance company owned by its policyholders. The Fortune 500 company remains firmly anchored to Bloomington, although it extended its reach several years ago through regional hubs opened in Atlanta, Dallas and Phoenix.

The company offers investments, banking and insurance lines for vehicles, homes and property, life, health, disability and liability, small businesses and identity restoration. It has 58,000 employees, more than 19,000 independent contractor agents, and 83 million policies and accounts.

“George is tied to Central Illinois as a farmer up until he was around 40 and so the roots of this company include farming and agriculture,” Farley said. “When George started the company, auto insurance was still a relatively new thing. Automobiles were not mass produced until 1908.

"The product lines have changed, but our concept — to pay what we owe and take care of our customers — has remained consistent.”

Through the years, the company worked to improve efficiency. At one point, that included the use of sewing machines.

“We used to paste the policies and applications together and an employee could do maybe 100 in an hour,” he said. “We bought a Singer sewing machine and started sewing them and went up to about 1,000 per hour. We sewed our policies together until about 1977.

"There are still employees here who started out sewing policies together. Then, in 1977, someone decided to buy a stapler and so, you know, the process changed.”

Among treasures in the archives — apparently looking forward as well as back — is a crystal ball.

“We had an interesting executive by the name of Morris Fuller,” Farley said. “He used to hold meetings in his office about the direction of the life company and where it should go.

"To resolve any issues, he would bring a crystal ball out during the meetings which had a hidden button on it. He would ask the question and hit the button at his convenience to get the answer he wanted.”

Fuller also was responsible for the longstanding tradition of ringing a bell after the sale of a life policy.

"The life department was on the eighth floor" (of the downtown building), Farley said. "He wanted a way to where he wouldn't have to yell across the floor to call a meeting. He had one of his managers find a device that would allow him to call a meeting."

The manager went to the railroad yards, climbed a train engine and "acquired" a bell, Farley said.

The bell worked well, and Fuller decided to take it to conventions.

"At the time, he was using a small cannon to open the life company conventions and most of these conventions were held in February, so they were inside of a building," he added. "To fire a cannon inside a building did not make people happy. So they used the bell, and the agents loved it."

From there was born the Society of Bell-ringers; members wore a red ribbon with a bell around their neck and had a membership card. They eventually got hand-held bells and, every time an agent bound a life insurance policy, they would stand up in their office and ring a bell.

Stopping in front of a picture taken at a 1939 convention, Farley said one of the amazing things about State Farm is the long-lasting relationships with agents and their families.

"I sometimes ask groups how old they think the youngest State Farm agent ever was," he said. "It was actually this 12-year-old boy from Georgia. It was before child labor laws, but his father was the agency director in Georgia, so he just licensed his son to sell insurance, too.

"Now, many of his descendants to this day are State Farm agents in Georgia and still around."

Awards and trophies take up a lot of space and so many are photographed and stored in another room. When fast-pitch softball was popular in the 1970s, State Farm had a team, and a pretty good one, too, at one point. The Heritage Unit features uniforms from those teams.

Another cabinet holds an assortment of State Farm-associated neckties. Elsewhere are pins and pens, newsletters from state agencies, and even the four corn maidens removed from the downtown building in 2001. The terra cotta sculptures were thought to watch over the cornfields of customers, according to Farley.

The archives also have more than a million audio and video files, including one made in 1925 that featuring a young Ed Rust Sr. giving instructions on how to work a claim.

“We are working on digitalizing as much as we can so we can better use them and keep them forever,” Farley said.

One of the company's trademarks has been its popular road atlas. Farley’s favorites were printed during the World War II era.

“It was the only time we put in maps of the entire world and we did that so families could see where there sons were fighting at overseas,” he said.

Farley, who has an assistant and an intern for help, must document every item before it's displayed.

“It’s a lot of work to document something, but we use every tool we have because we want to make sure that everything is authentic,” he said. “These aren’t just items that we get. It’s someone’s history. It’s our company’s history and we take pride in that.”

What: State Farm is the largest property and casualty insurance provider in the United States with corporate headquarters in Bloomington. The main business is State Farm Mutual Automobile Insurance Company. State Farm is ranked No. 36 on the 2018 Fortune 500 list of the largest U.S. corporations by total revenue.

History: State Farm was founded in 1922 by retired farmer George J. Mecherle. The firm specialized in auto insurance for farmers and later expanded services into other types of insurance, such as homeowners and life insurance, and then to banking and financial services.

Commercials: "Like a Good Neighbor, State Farm Is There" was written by Barry Manilow in 1971. Recent ads feature Jake from State Farm ("uh, khakis?") and Cheryl's She Shed. The company slogan (State Farm. Here to Help Life Go Right) was introduced in 2016.

Logo: The State Farm interlocked red tri-oval logo was created in the mid- to late 1940s and updated in 1953. On Dec. 23, 2011, State Farm transformed its interlocked logo to to showcase the company’s core service offerings of auto, fire, and life. The new logo was introduced Jan. 1, 2012, in celebration of the company’s 90th anniversary. It consists of a simple three-oval design adjacent to the State Farm wordmark.

A collection of floor plans from http://looplink.guthandassociates.com/xNet/Looplink/TmplEngine/ListingProfilePage.aspx?stid=guthassociates&am…

BLOOMINGTON — State Farm has a buyer for its iconic downtown Bloomington building.

State Farm has announced that it plans to sell its iconic former headquarters building in downtown Bloomington.  Here is a look back at the bu…

BLOOMINGTON — As the president of the board of the West Bloomington Revitalization Project, Deborah Halperin believes that home improvements a…

NORMAL — Have you ever driven across Glenn Avenue Bridge in Normal and thought, 'I want that'?

BLOOMINGTON — Kenisha Luke was thrilled to see her son Miles have "his Oprah moment" Thursday.

5 things to know about the State Farm downtown building

1: The State Farm downtown building, its former headquarters, will be demolished, the company announced Thursday. The project will take at lea… 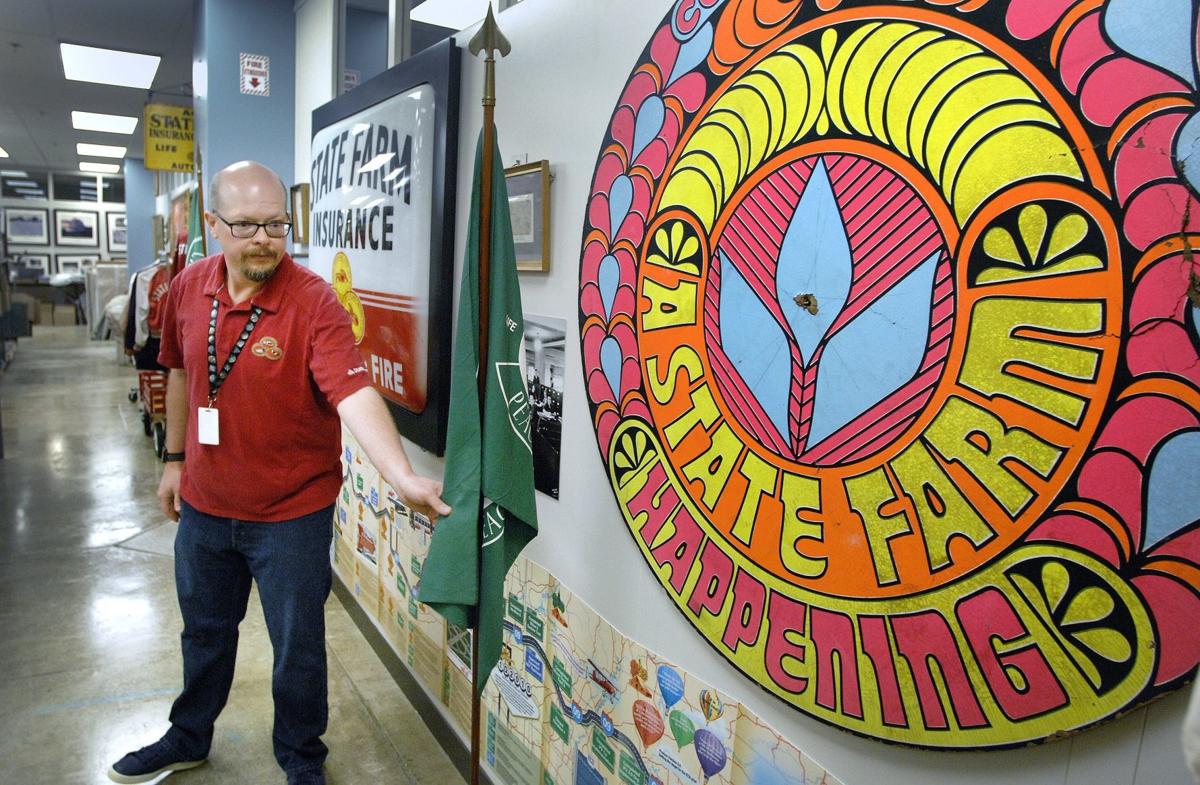 State Farm archivist Buck Farley preserves everything from the mundane, such as the lighted sign seen above his shoulder, to the whimsical, including the company's attempts to reach out to youthful customers at right, at the company's Heritage Unit in the Bloomington headquarters. 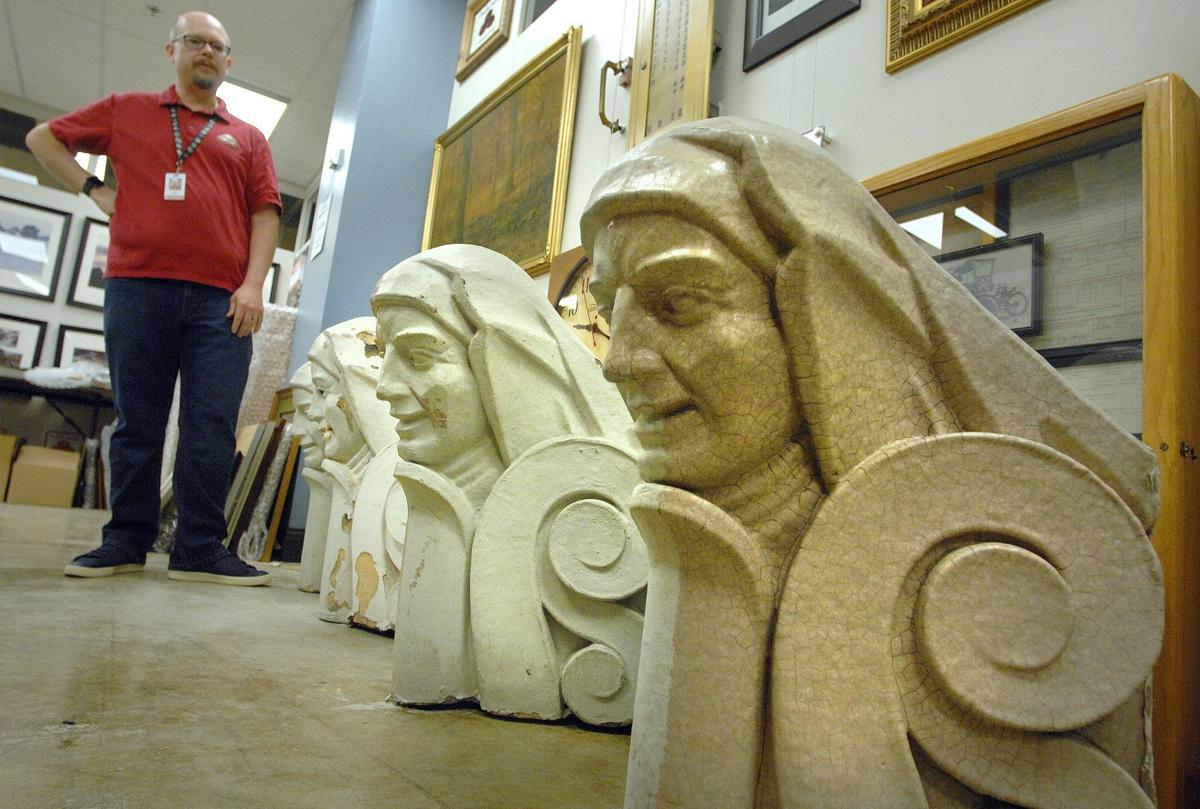 State Farm's corn maidens were removed from the downtown insurance building and are now stored in the company's Heritage Unit archives. 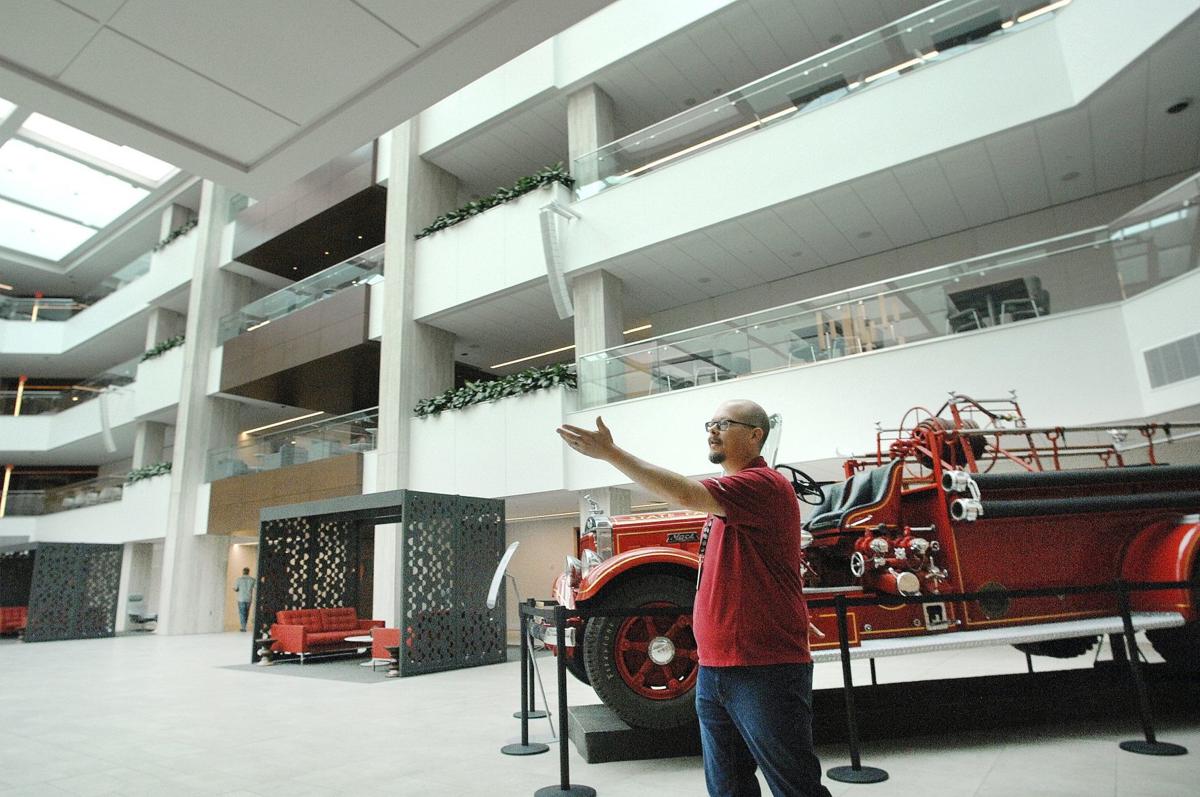 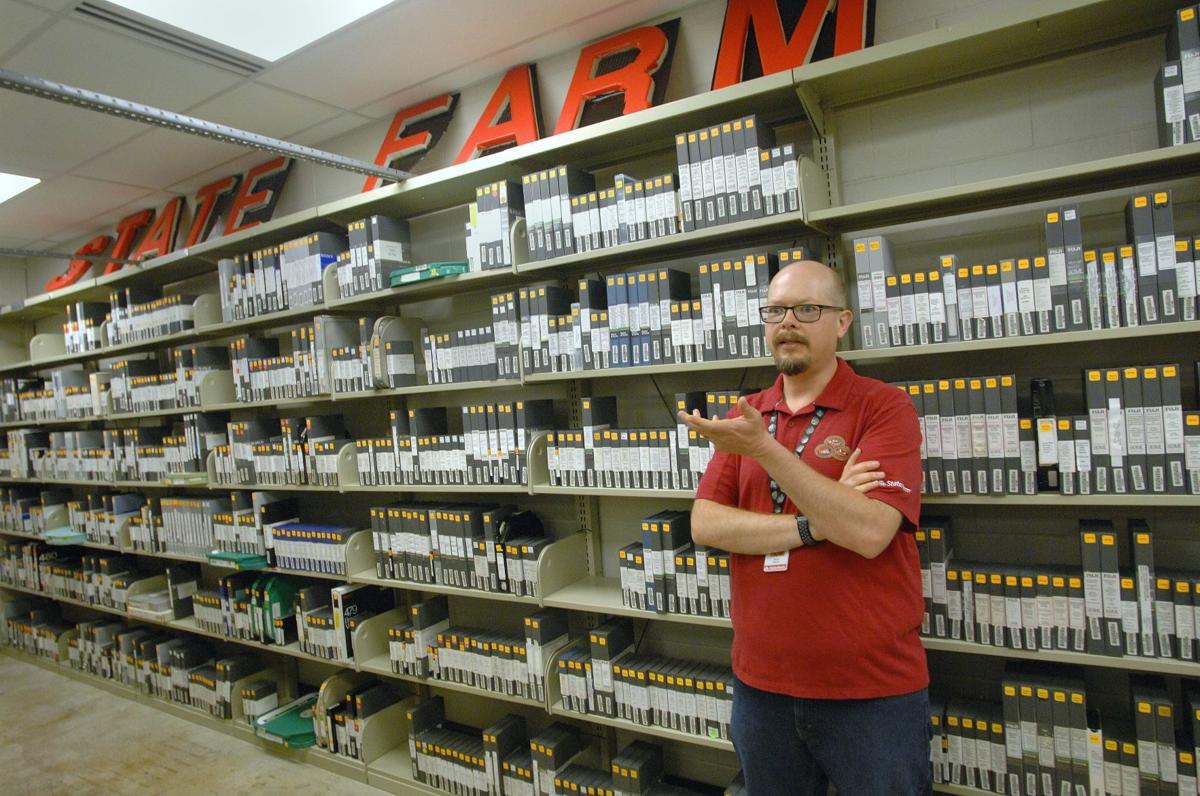 State Farm archivist Buck Farley said the company's film, video and negative collection comprises more than a million items that document its efforts to reach out to customers.