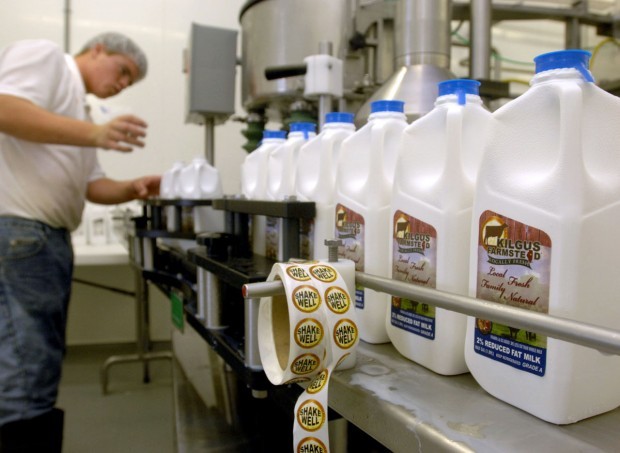 Justin Kilgus at the controls bottling half gallon milk containers Friday, July 24, 2009, at the family farm outside of Fairbury. (The Pantagraph, CARLOS T. MIRANDA) 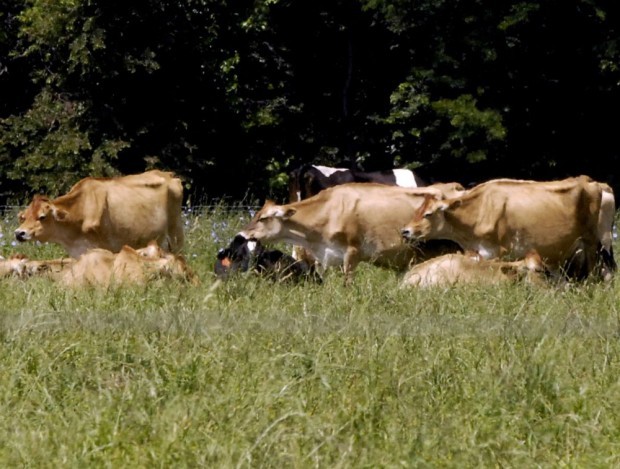 Jersey cows in the pasture Friday, July 24, 2009, at the Kilgus family farm outside of Fairbury. (The Pantagraph, CARLOS T. MIRANDA) 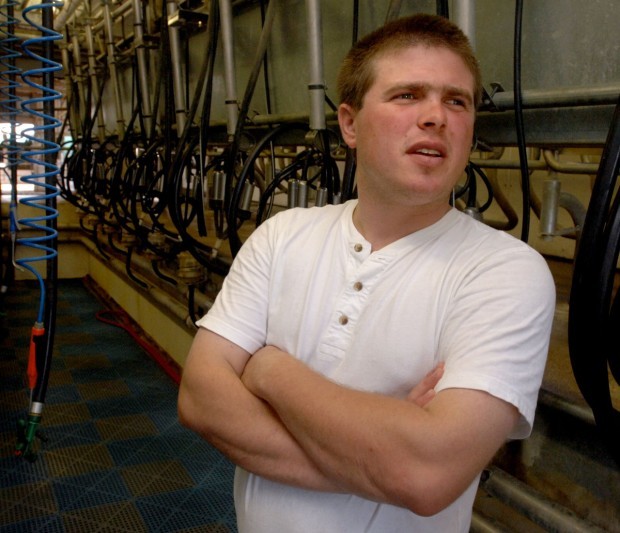 Matt Kilgus stands in the milking area of the farm Friday, July 24, 2009, outside of Fairbury. (The Pantagraph, CARLOS T. MIRANDA)
By Bob Holliday |

FAIRBURY -- Matt Kilgus opened a half-gallon bottle of Kilgus Farmstead milk and pointed to the cream on top.

It's what makes his milk different from 99 percent of the milk on the market.

Kilgus, 27, who bottles about 2,400 gallons a week, hopes to develop a niche market, perhaps appealing to those particular about where their milk comes from.

"All is produced here from start to finish. We have total control over it," Kilgus said.

That includes his 80 Jersey cows, which Kilgus said give particularly rich milk.

Production began in early June and the facility, which includes milking and bottling operations, is operated by a half-dozen members of the Kilgus family.

He said his milk is healthier than homogenized milk, which has fat particles broken up and dispersed uniformly so the cream doesn't rise. That, in turn, makes it easier for fat to be absorbed into the body.

Like milk found in the grocery store, Kilgus Farmstead milk is pasteurized to kill bacteria and has Vitamin D added.

However, milk from the Fairbury creamery is more expensive than many homogenized milks, running $3.99 a gallon at some grocery stores, Kilgus said. It is or will be available at locations in Bloomington-Normal, Fairbury, Pontiac, Gibson City, Congerville and Streator.

If the trend toward non-homogenized milk catches on, Kilgus believes more operations like his $500,000 facility will open.

Kilgus, co-owner with his uncle, Paul Kilgus, said the family-run business used to sell to Prairie Farms before deciding to go it on its own.

"We spent a couple of years thinking about it and visited some farmsteads in Iowa and Indiana," Kilgus said.

Mark Steffen, co-owner of Dave's Supermarket in Fairbury, believes Kilgus will serve "people who like to buy things produced locally."

Steffen said the creamery's milk is popular with customers even though it costs more.

Gas Prices Near $3 a Gallon Ahead of Summer

Gas Prices Near $3 a Gallon Ahead of Summer

The issue was brought to the agency's attention by Illinois State University personnel after people reported symptoms consistent with food poisoning, the department said.

About 40,000 people, or around 69% of State Farm's 57,500 employees nationwide will shift to a hybrid workplace model in July, the company said.

Dozens of the confirmed cases of COVID-19 in McLean County in recent weeks have been affiliated with workers at the Rivian manufacturing site in Normal, the company confirmed Friday.

Also, more money tips from experts at NerdWallet, Forbes and the Motley-Fool.

Watch now: Bloomington ranks No. 1 for first-time homebuyers on this study

Bloomington ranks as the best market for first-time home buyers in 2021, according to a report released Thursday by realtor.com.

COVID-19 vaccinations are accelerating, forcing CEOs to plot a return to the office sooner than expected

The return to the workplace means CEOs and human resources departments are under pressure to make difficult decisions — how quickly to mandate on-site work, whether to ask for proof of vaccinations and how to navigate shared spaces where people gather for coffee breaks and meetings.

Who's building what, and for how much? See the latest local building permits.

There is a major new player in the Illinois weed industry.

Why do we, both its customers and lawmakers, tolerate so much confessed — and unconfessed — corruption in meatpacking?

Justin Kilgus at the controls bottling half gallon milk containers Friday, July 24, 2009, at the family farm outside of Fairbury. (The Pantagraph, CARLOS T. MIRANDA)

Jersey cows in the pasture Friday, July 24, 2009, at the Kilgus family farm outside of Fairbury. (The Pantagraph, CARLOS T. MIRANDA)

Matt Kilgus stands in the milking area of the farm Friday, July 24, 2009, outside of Fairbury. (The Pantagraph, CARLOS T. MIRANDA)
© Copyright 2021 The Pantagraph, 205 N. Main St. Bloomington, IL | Terms of Use | Privacy Policy
Powered by BLOX Content Management System from TownNews.com.
You don't have any notifications.