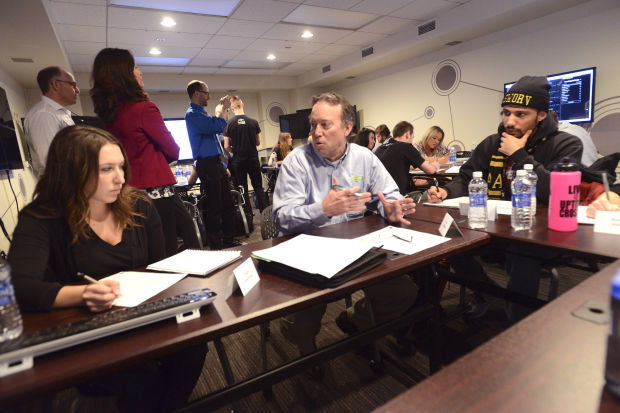 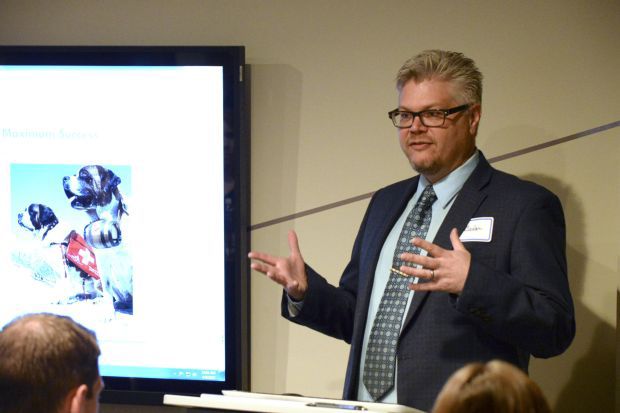 Brian Huonker, marketing analyst at State Farm, spoke about the role of content marketing to students and faculty at the event.

NORMAL — The importance of social media in marketing is growing and businesses need to find ways to tell their story, participants in a Social Media Boot Camp at Illinois State University were told.

“It's really about building trust between you and the consumer,” said Brian Huonker, a member of the social media team at State Farm. “People are willing to pay for trust.”

Huonker, a marketing analyst at State Farm and former assistant director of university marketing at ISU, said some businesses are worried about negative comments on Facebook, Twitter or other social media sites. But Huonker said, “You either have to engage with them or put your head in the sand” because the comments will be out there anyway.

“Social media is word of mouth on steroids,” said Jeri Beggs, ISU professor of marketing. “Before, if you had a bad experience, you could tell eight or 10 people. Now, you can reach the world.”

Huonker's advice is to respond to negative comments by acknowledging and offering to solve the problem.

The daylong “boot camp” took place Friday in ISU's Social Media Analytics Command Center and involved students from the School of Communication and the College of Business working with representatives of three businesses and ISU's Office of International Studies.

In addition to talking about responding to comments, the boot camp covered topics such as providing consumers with information — called content marketing — and using analytics, which is measuring the reach and impact of social media.

In the 1900s, Jell-O used what would now be called content marketing by providing free recipes in hopes people would use its product even though they could buy any brand, he said.

The keys to success include creating content that's valuable to your customer or potential customer, Huonker said.

“You need to make them smarter,” he said.

Nathan Carpenter, ISU assistant director of convergent media, showed participants various resources for measuring how well a company's message is being received, whether it is positive or negative and how it is being spread.

After each presentation, participants broke into groups to work on using what had just been discussed to help the organizations involved.

Peter Kaufman, ISU associate professor of marketing, said, “Our primary goal was to build knowledge about social media with students and participating companies and the various tools available.”

Kaufman said they hope to offer another boot camp this fall. Companies interested in participating should contact Carpenter at njcarpe@ilstu.edu, he said.

Steven Ullestad of Naperville, a graduate student in communications with a marketing concentration, said a lot of businesses think once something is on social media, “it runs like wildfire and there's nothing you can do about it.” The boot camp showed you can do something, he said.

“Along with traditional advertising, social media is a good tool, but it's not the only tool that should be used,” said Paige Schlesinger of Libertyville, who will be graduating in May with a marketing degree. “You have to integrate every single element.”

ISU junior Ethan Rivera of Schiller Park, an integrated marketing communications major, expects social media to grow as a way for consumers and businesses to communicate.

“It's one click or one sentence typed away,” Rivera said.

Brian Huonker, marketing analyst at State Farm, spoke about the role of content marketing to students and faculty at the event.