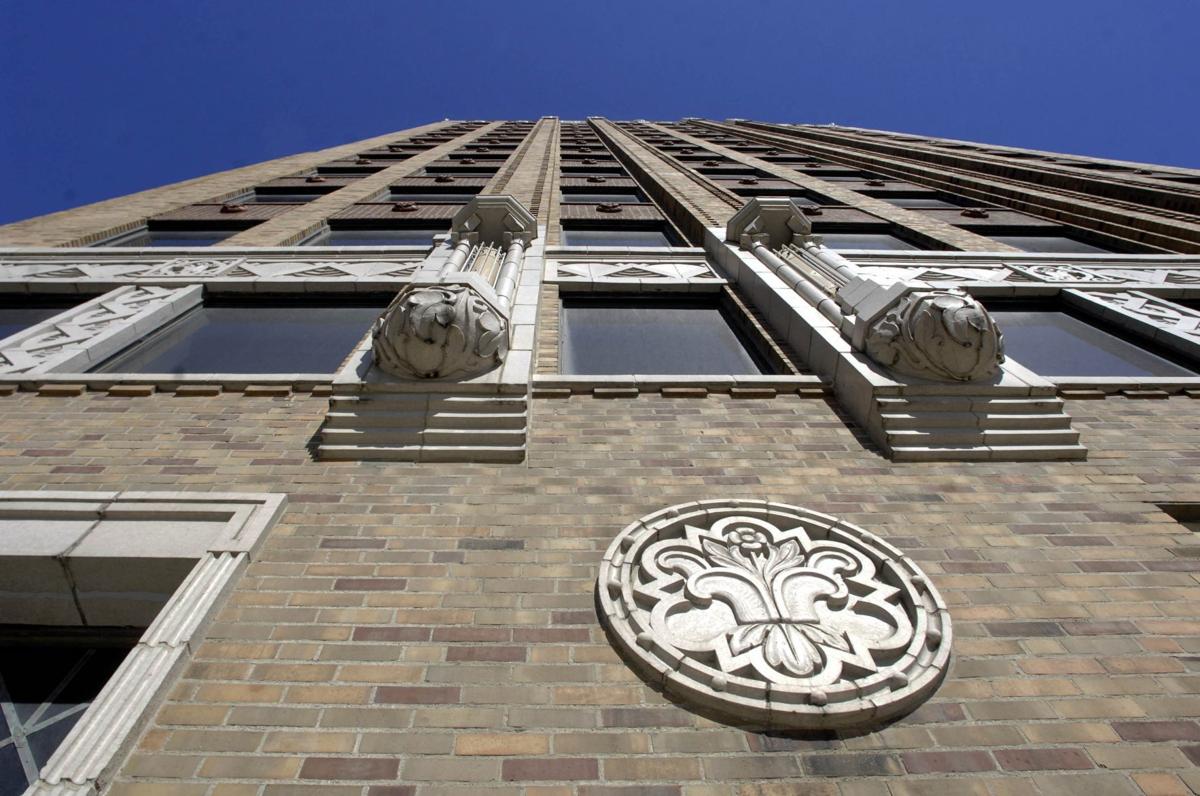 The State Farm downtown Bloomington office building continues to be well maintained Wednesday, March 6, 2019, and is likely to change hands later this summer, according to broker Julie Guth of Guth & Associates of Champaign. 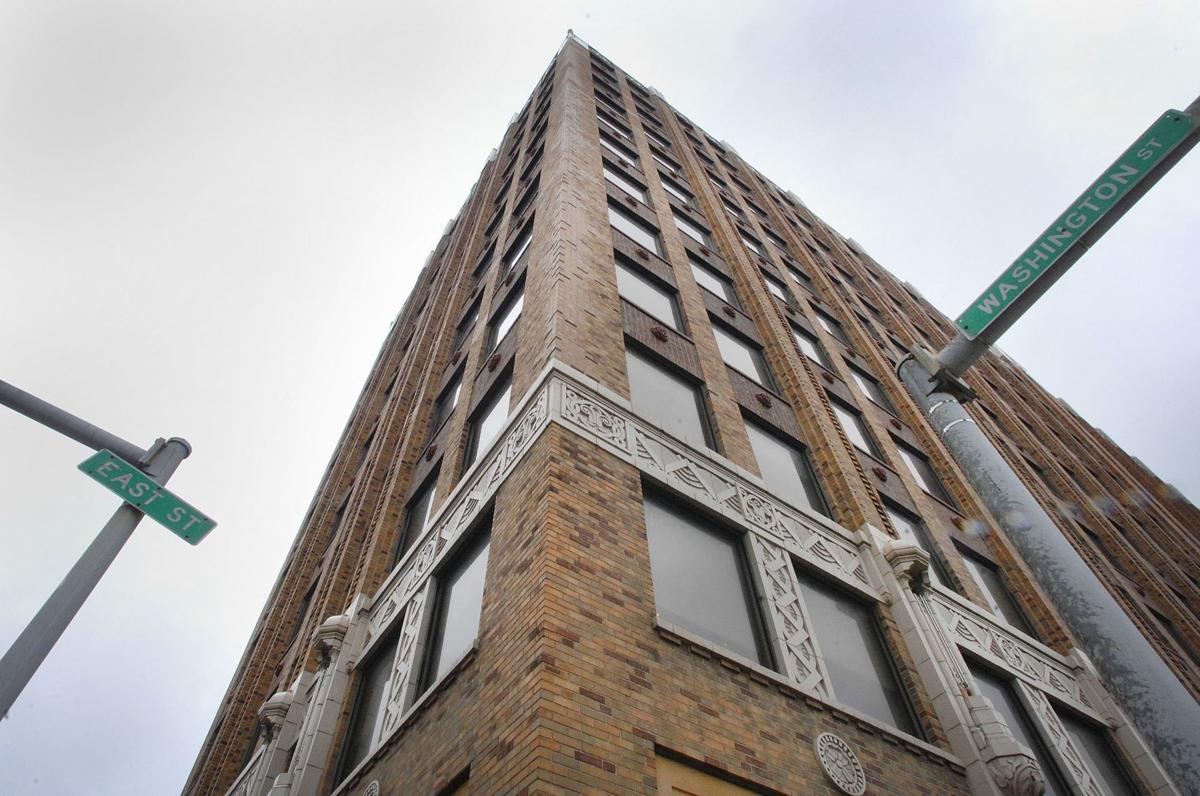 State Farm's historic downtown building towers over the intersection of Washington and East streets in Bloomington.

BLOOMINGTON — State Farm has a buyer for its iconic downtown Bloomington building.

The Bloomington-based insurer told The Pantagraph Wednesday morning that the company has entered into a purchase agreement "with an interested buyer," but did not identify the buyer.

“With our approval, the buyer has begun marketing the property for lease as office space to potential tenants,” spokesman Chris Pilcic told the newspaper.

Both parties anticipate closing on the deal this summer and State Farm has begun work to remove and preserve historical items from the building, he added.

City and economic development officials were happy to hear of the pending sale.

"This is clearly great news for downtown revitalization and for economic development of our entire community," said Mayor Tari Renner.

"Downtown is a priority for the city, and we stand at the ready to assist and partner in whatever way appropriate," added City Manager Tim Gleason.

"This is outstanding news for the community,' said Zach Dietmeier, spokesman for Bloomington-Normal Economic Development Council. "From the EDC perspective, we knew it was going to be a challenge to find somebody who had the capacity to use that much space. We are very happy to see that it will be maintained as office space for local business."

The EDC had conversations with some interested parties, "but we don't know who the buyer is," Dietmeier added. "It's a private investment so it might be hard to find out until everything is solidified."

Broker Jill Guth of Guth & Associates, a Champaign-based brokerage firm, declined to identify the buyer, but confirmed the party has agreed to enter into a purchase agreement with State Farm.

“We have a lot between now and closing that needs to happen,” she said. “We  have a 90-day due diligence period which will determine whether we want to move forward with closing on the property.”

“We are working through the sales process with the interested buyer and have nothing further to share at this time,” said Pilcic, public affairs senior specialist for State Farm.

More  importantly, she added, she and the proposed buyer will spend the next two to three months determining if there is a market for leasing the building.

“The first floor could be a retail/restaurant opportunity and it could be multiple retailers or restaurants,” Guth said. “There is an existing kitchen on the first floor and some great space that lends itself to a restaurant. But we have a lot of due diligence to do before we move forward and finalize the agreement.”

“It’s an exciting opportunity. The buyer has a lot of experience in adaptive re-use and redevelopment of buildings and turning projects around or turning buildings around. Obviously that building has a lot of history in downtown Bloomington and we hope to breathe some new life and energy into it.”

State Farm closed the 200,000-square-foot downtown building in January 2018. It was the insurer's original corporate headquarters from 1929 to 1972. It was placed on the market for sale last April.

State Farm has declined to disclose an asking sale price for the 13-story building that has a market value of just under $9 million, according to the McLean County assessor's office.

At the time of the closing, the company said it was making the move as part of a massive restructuring to better serve its customers.

The restructuring that began last year has included shifting employees around the country and laying off hundreds of other workers.

BLOOMINGTON — State Farm will remove the iconic red letters spelling out its name at its former headquarters in downtown Bloomington.

A vestige of State Farm and Bloomington for 90 years has been the company’s downtown building, its corporate headquarters from 1929 to 1972, a…

BLOOMINGTON — After a year of radical change at State Farm, the chairman of the board remains the same with President and CEO Michael Tipsord …

12 things you might not know about State Farm's Downtown Building

The building, 112 E. Washington St., was the first corporate headquarters of the insurance company, founded in 1922. It was also known as the …

💵 Well-insured: A look back at State Farm Insurance in Bloomington

State Farm Insurance has been a major presence in Bloomington-Normal since the 1920's.

Your turn: What should State Farm do with its downtown building?

In a series of Facebook queries in January 2018, we asked you what should be done with State Farm's iconic downtown building once employees le…

BLOOMINGTON — Rock and jewelry enthusiasts have a new destination in downtown Bloomington.

BLOOMINGTON — Downtown will be busy with summer events and improvement projects, so City Manager Tim Gleason had his staff put together a "pub…

A history lesson on the Farm

BLOOMINGTON — The tour might not make much sense without its lead storyteller, Buck Farley.

BLOOMINGTON — State Farm is "still working through the sale process" of its former headquarters building downtown, but the insurer and its bro…

BLOOMINGTON — Bloomington squared its shoulders and looked forward Thursday, hoping to find “some opportunity for the future” after State Farm…

BLOOMINGTON — Tearing down the State Farm downtown building could cost millions of dollars, disrupt traffic and create a lot of dust.

BLOOMINGTON — When a planned sale fell through, State Farm sent shock waves through Bloomington-Normal with news it would demolish its origina… 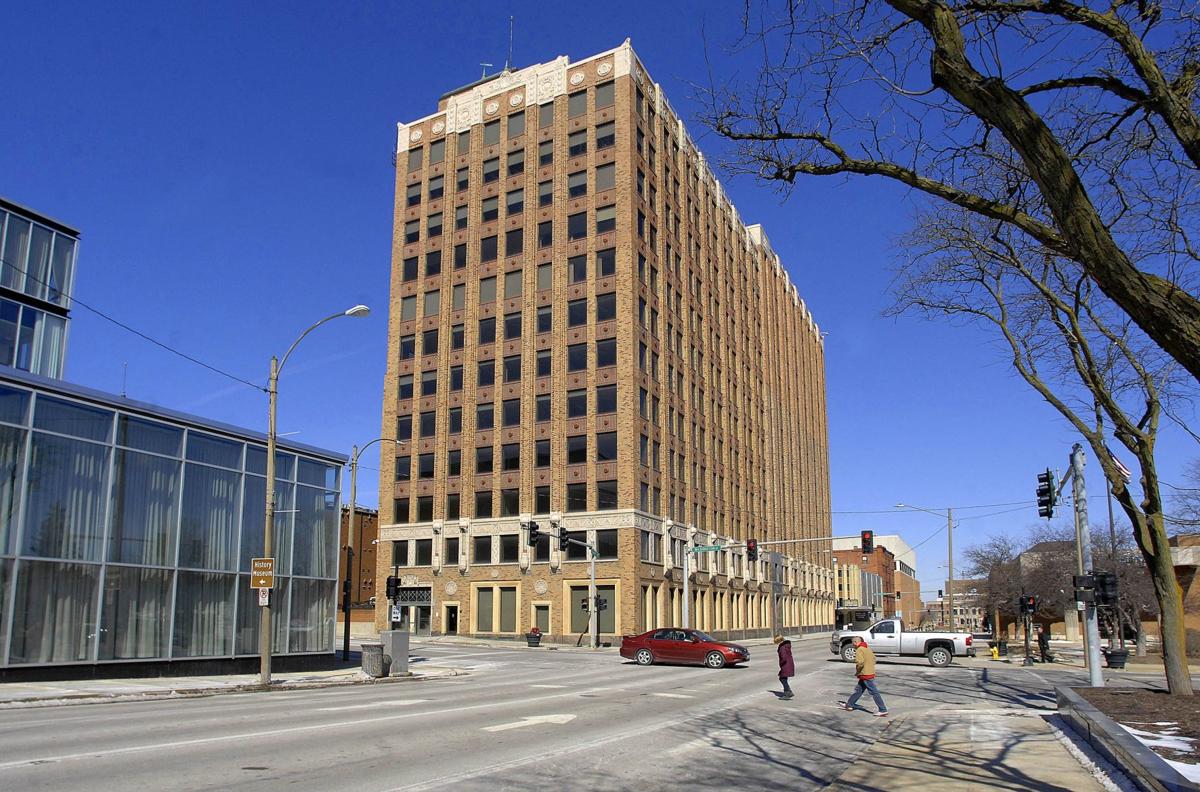 The State Farm downtown Bloomington office building continues to be well maintained Wednesday, March 6, 2019, and is likely to change hands later this summer, according to broker Julie Guth of Guth & Associates of Champaign.

State Farm's historic downtown building towers over the intersection of Washington and East streets in Bloomington. 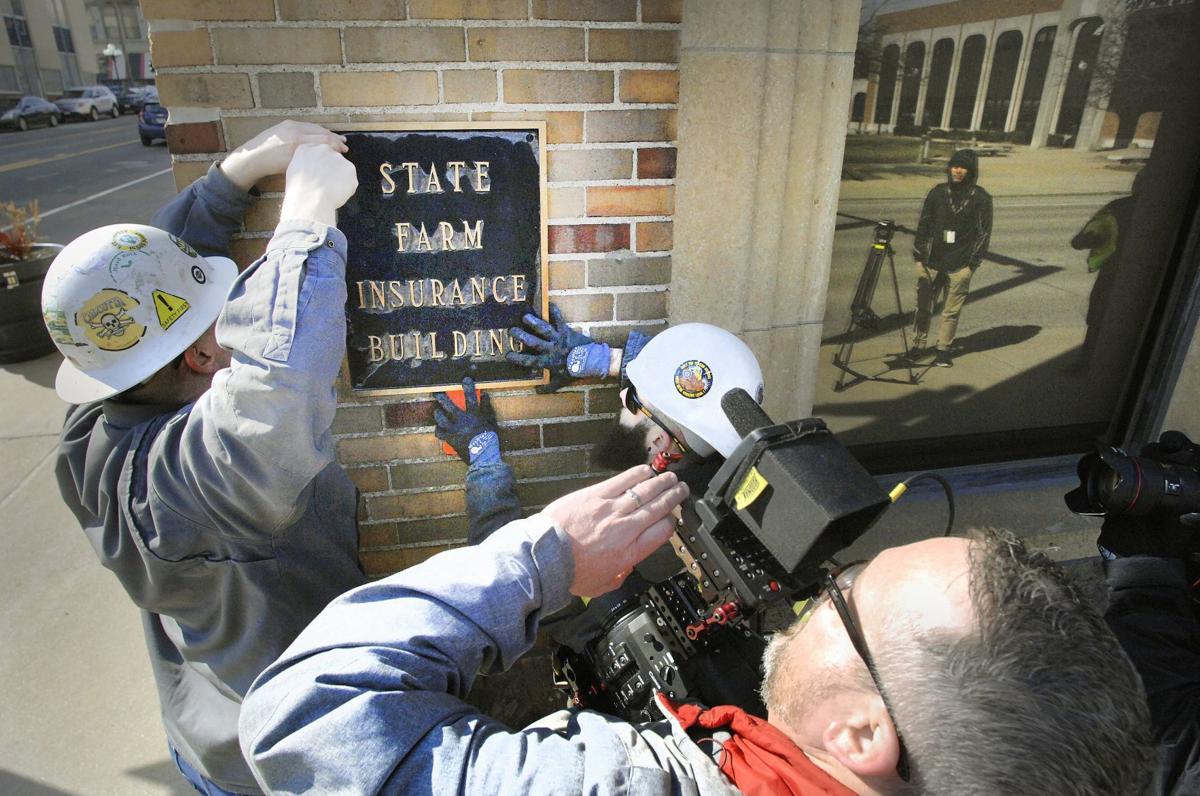 A State Farm film crew documents Sean Arnstrom, left, of Ryan Companies, and Andrew Baker, of Conrad Sheet Metal, as they remove the last of the brass signs that marked the State Farm Insurance Building at Washington and East Streets Friday, March 1, 2019, in downtown Bloomington. 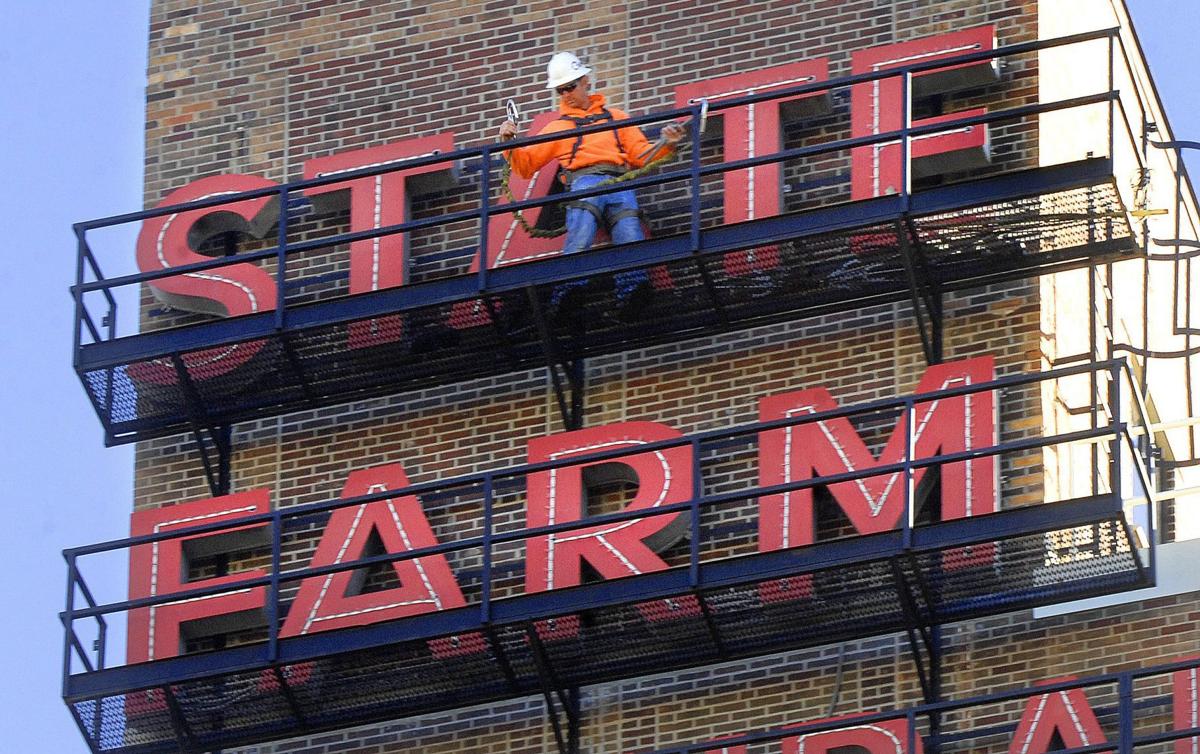 A worker secures his safety harness on Oct. 23, 2018, before doing preliminary work to remove the sign atop the west side of the State Farm downtown building. State Farm removed the sign and one on the east side roof line after placing the now-vacant former corporate headquarters for sale. 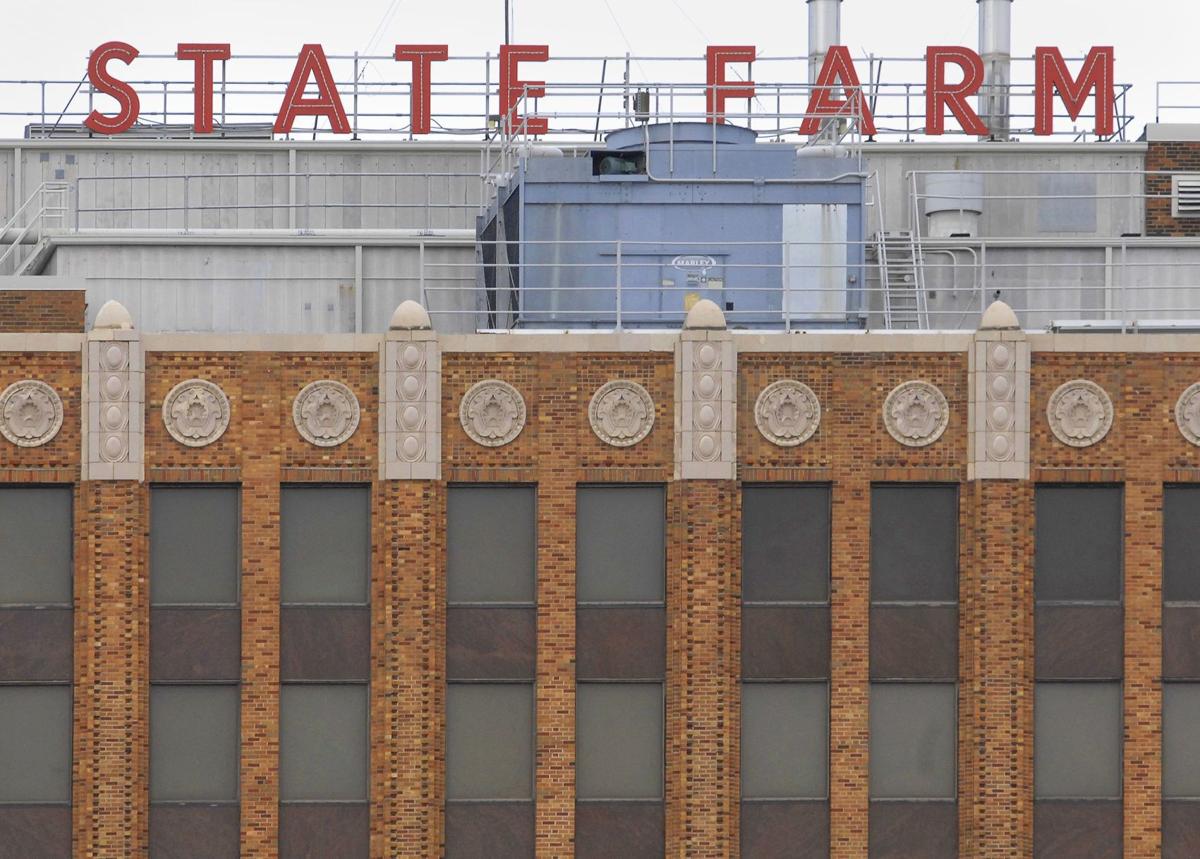 Five-foot-tall, red letters spelling out the State Farm name could be seen on the roof of the former corporate headquarters building in downtown Bloomington. The iconic signage was removed in October 2018.