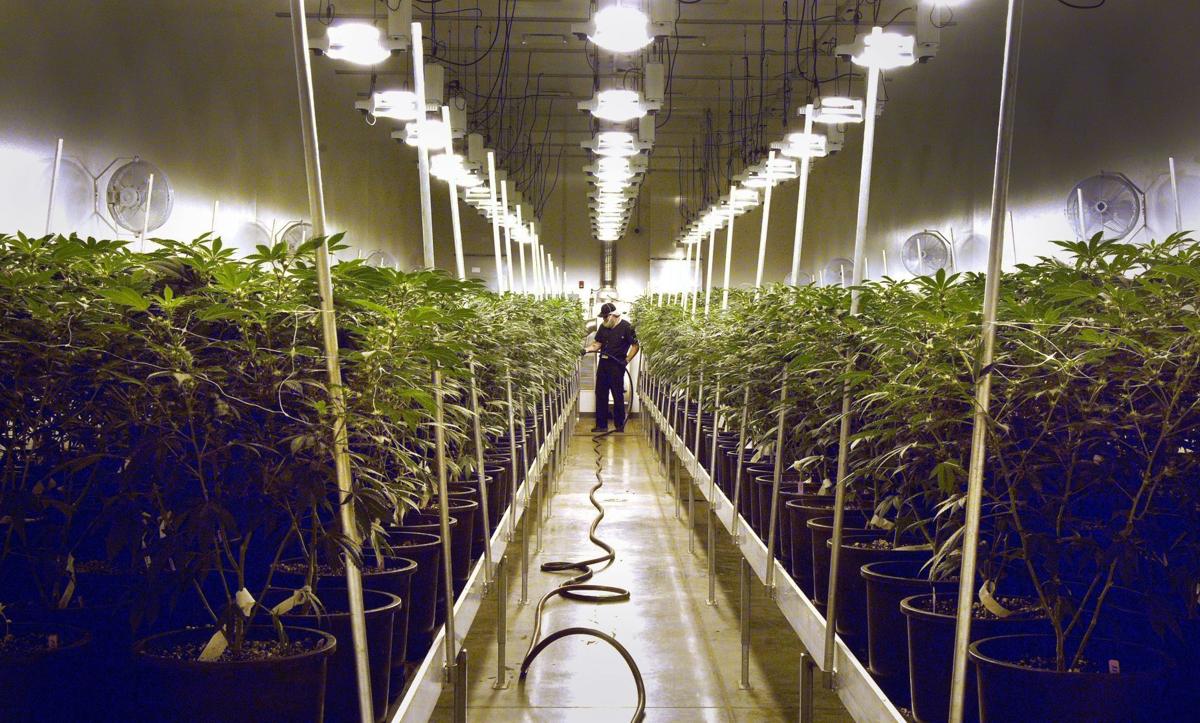 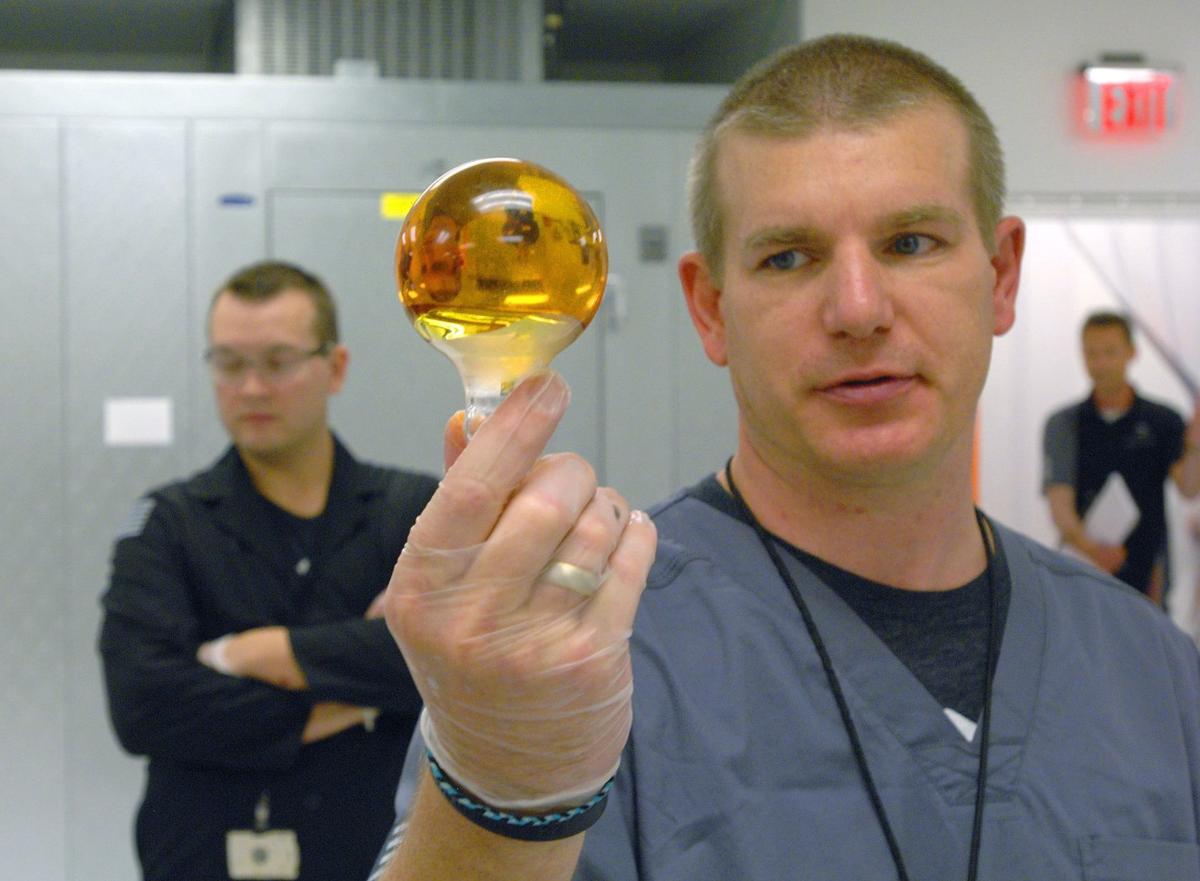 Tim McGraw, CEO of Revolution Cannabis in Delavan, holds a boiling flask filled with cannabinol product harvested from plants grown in the cultivation center. The refined product is nearly solid at room temperature and won't spill out of the overturned flask. 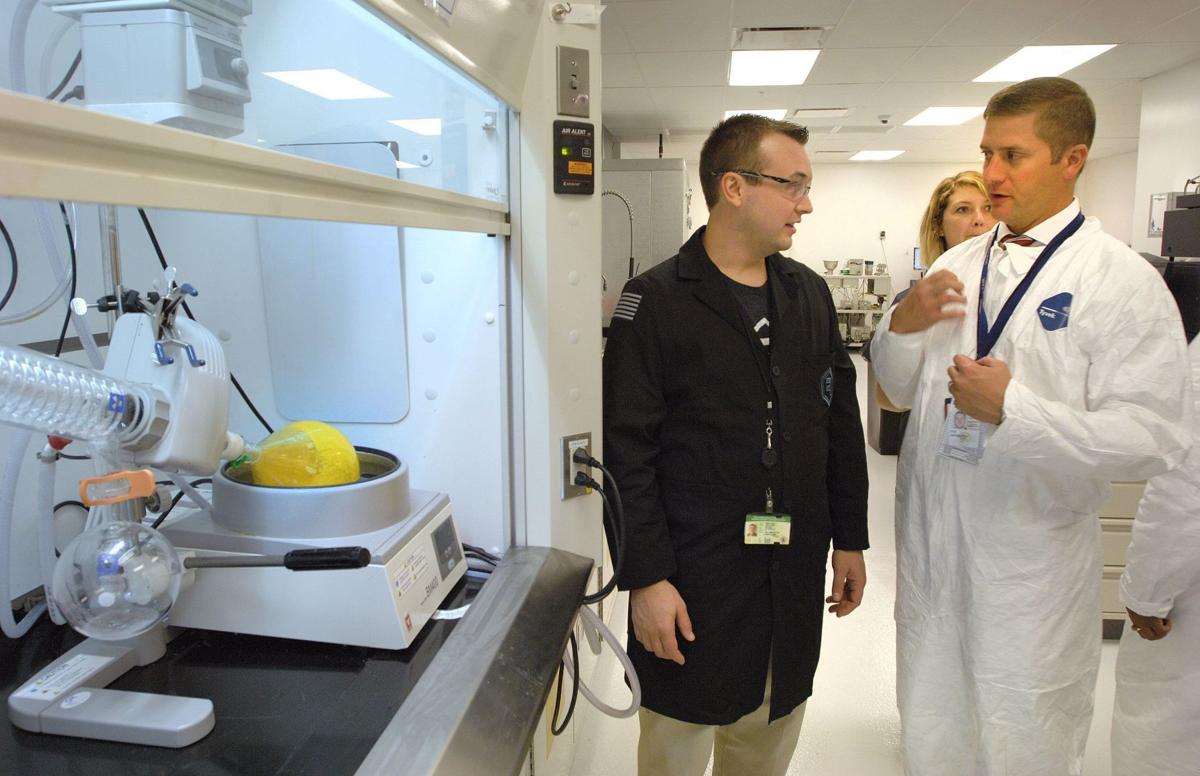 Russel Draffen, left, a chemist with Revolution Cannabis-Delavan, talks with Jeff Cox, bureau chief for medicinal plants with the Illinois Department of Agriculture, as a flask of cannabinol is processed under a vent hood on Monday at the cultivation center. The Illinois Department of Agriculture supervises the growth of medical marijuana in Illinois.

DELAVAN — As a lifelong resident of Delavan, Eric Diekhoff has seen a lot of changes in the community of about 1,700 people.

A former corn and soybean farmer, Diekhoff is now the general manager of the Revolution Cannabis-Delavan facility, a $23 million medical marijuana cultivation center in the Tazewell County community.

“It’s already been huge for Delavan and the thing is that after the program expands, it’s going to be even better for Delavan and we will have the ability to hire more people,” he said. “But we feel there are great things ahead and both this plant and this town are going to benefit.”

The 75,000-square-foot facility opened in July last year with 47 employees. Since then, 11 positions have been eliminated, but Revolution officials think the medical marijuana business in Illinois is in its infancy.

“We have only about 25 to 30 percent of our plant in operation right now,” said CEO and founder Tim McGraw. “Hopefully, that will change in the next year to 18 months.”

The plant was open for media tours Monday, the first time cameras and journalists were allowed inside the facility.

“Of all of the reporting you see on cannabis, the majority of it has come from Colorado, and Colorado doesn’t have near the level of sophistication that is required in the state of Illinois,” said company COO Dustin Shroyer. “There are thousands of businesses in Colorado and they are in a price war, fighting each other, and they can’t afford to even think about what the next best medicine in cannabis is going to be. They can’t focus on research and development like we can here.”

“Now that the politics is behind us and the governor has endorsed the program, it is helping thousands of people and nobody is getting hurt,” he said. “There is still a huge segment of the people that we aren’t helping. There are a lot of people who are still in pain who could benefit from medical cannabis.”

“We had 1,705 opiate overdoses in Illinois alone, last year,” he said. “That’s insane and four out of five people addicted to heroin started out on opiates. They go from Vicodin to Norco to Oxycontin to Fentanyl, which is 50 times stronger than heroin.

"People don’t realize that these opiates are pharmaceutical, laboratory-grade heroin and every state that has a medical cannabis program that allows for the treatment of pain has seen a 25 percent reduction in overdose deaths.”

McGraw rejects the notion that medical marijuana is a gateway drug, leading to other, more dangerous drugs. Instead, it has helped patients who suffer from seizures, post traumatic stress disorder, cancer and severe muscle spasms, he said.

“I have seen amazing changes in kids with autism as well,” he said.

“There has been 4,000 years of documented cannabis use,” he said, “and not a single death without a pre-existing condition.”

The Delavan facility is working on hundreds of genetic strains, and plants are harvested about five times each year. Job descriptions of the 36 employees range from scientists to security guards to trimmers, who are primarily responsible for the efficiency and quality of preparing the marijuana for sale.

Security is a major focus, with more than 100 cameras placed around the facility that capture every square foot of the building.

The Illinois Department of Agriculture oversees regulation of all 20 licensed cultivation facilities in the state.

“We have a lot of rules and statutes that must be followed and our role is enforcing them,” said Jack Campbell, the bureau chief of medicinal plants for the department. “It is the highest regulated industry that the Department of Agriculture has. We inspect each cultivation center at least once a week and are satisfied to this point that everyone is following all of the rules.”

At the Delavan facility, the plants are cultivated, processed and then packaged for distribution to dispensaries in Illinois. McGraw declined to provide statistics on costs.

“The dispensaries buy it from us and then they put their own price on it,” he said. “But what is going to benefit everyone is when there are more consumers, which will help bring production and distribution costs down for everyone.”

NORMAL — Normal's medical marijuana dispensary is getting close to opening.

Photos: Inside a marijuana cultivation center

Tim McGraw, CEO of Revolution Cannabis in Delavan, holds a boiling flask filled with cannabinol product harvested from plants grown in the cultivation center. The refined product is nearly solid at room temperature and won't spill out of the overturned flask.

Russel Draffen, left, a chemist with Revolution Cannabis-Delavan, talks with Jeff Cox, bureau chief for medicinal plants with the Illinois Department of Agriculture, as a flask of cannabinol is processed under a vent hood on Monday at the cultivation center. The Illinois Department of Agriculture supervises the growth of medical marijuana in Illinois.