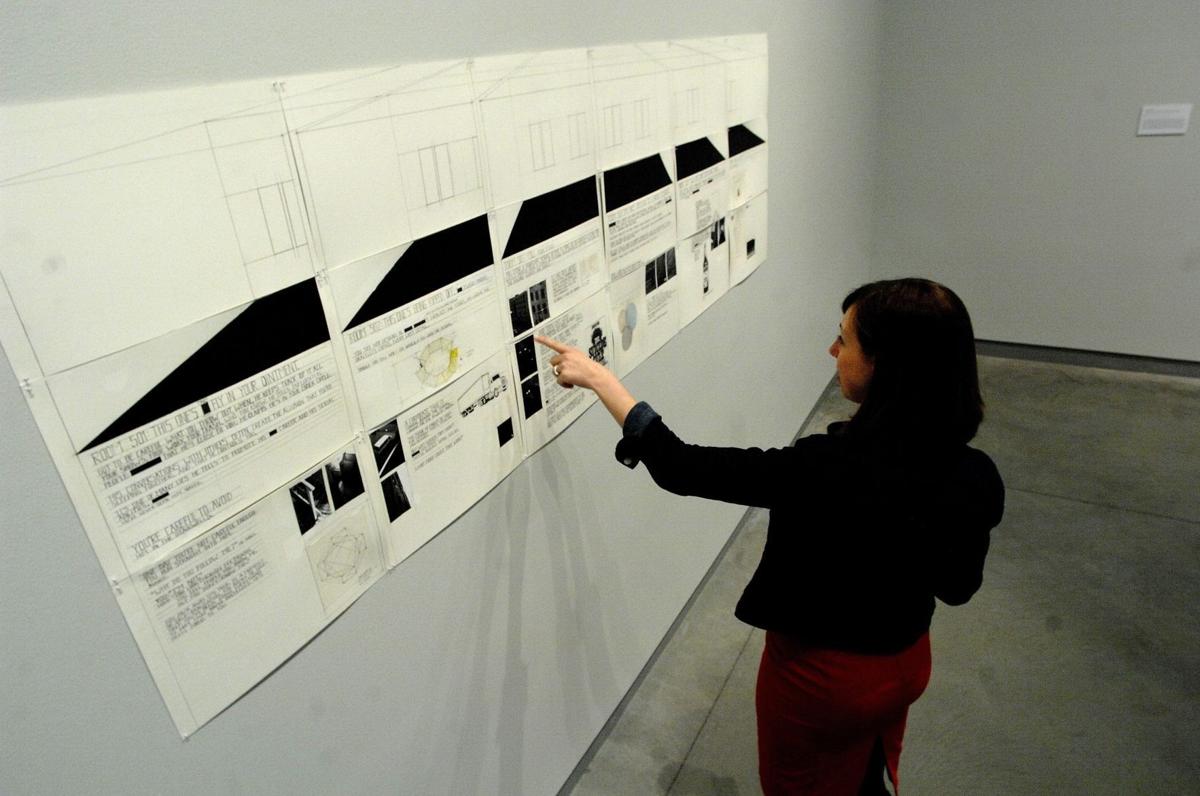 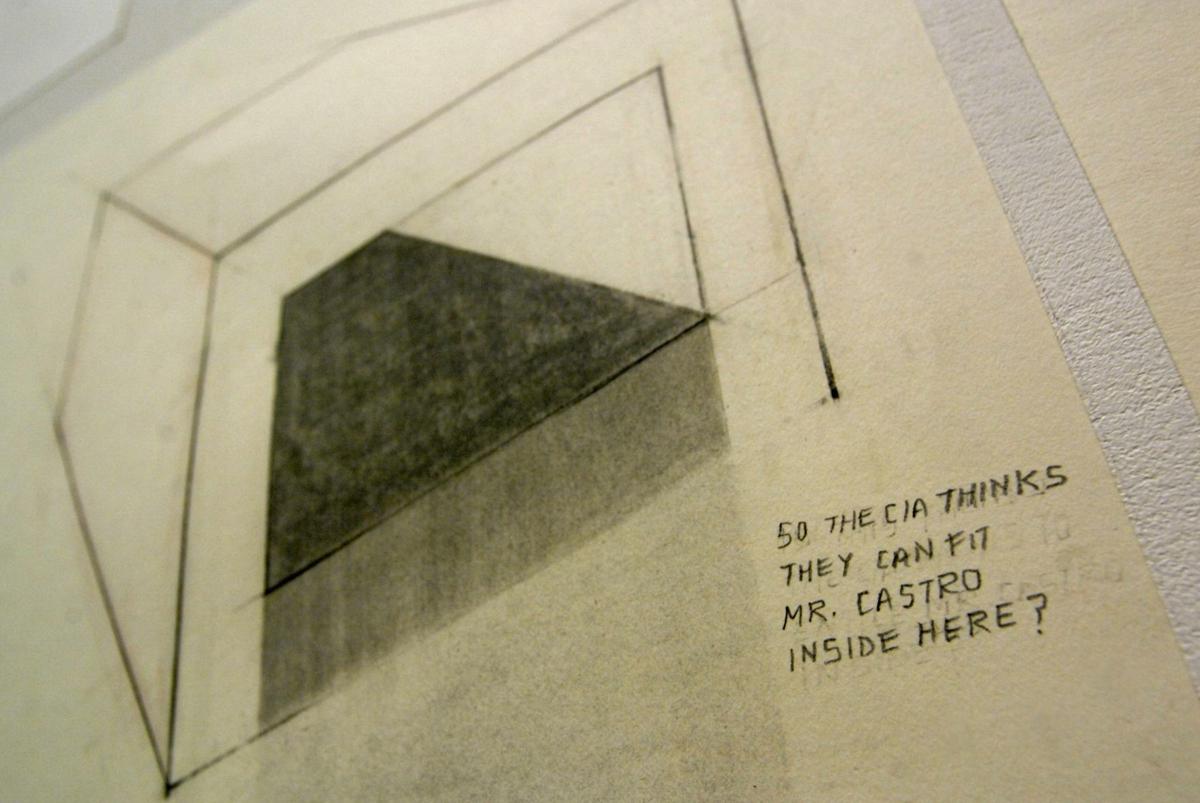 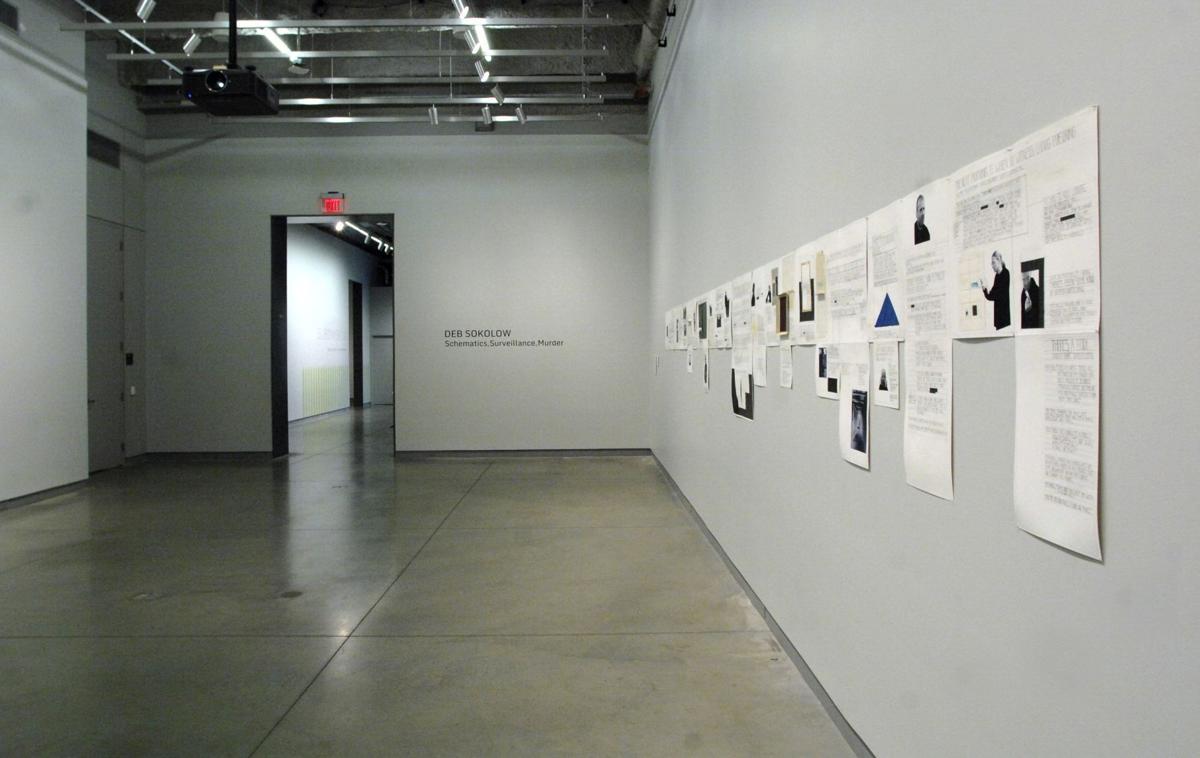 NORMAL — In a current world where truth and fiction routinely interface at various levels of our waking reality, Deb Sokolow's work seems like a perfect fit.

But with far more creativity and wit than we get on the 6 o'clock news.

The proof is in the artist's immersive and entertaining new exhibit, "Schematics, Surveillance, Murder," now on view in Illinois State University's University Galleries, through April 2.

Upon entering the space, visitors are promptly thrust into a world where Big Brother, or his minions, may be — no, probably are — watching you ... bugging you ... plotting against you ... trying to recruit you ... or invalidating your very existence.

Oh, and if you are famous or infamous enough, they also may want to exterminate you: you can run,  but you can't hide.

In "All Your Vulnerability Will Be Assessed: 2012-13, Plan to Poison," an artist residency in Norway has been transformed into a brainwashing station for an international ring of art thieves.

In "You tell people you're working really, really hard on things these days, Part 2," an art studio building in Chicago appears to have become the designated breeding ground for a dangerous cult.

In "CIA Failed Assassination Attempt on Mr. Fidel Castro #12 (Mr. Donald Judd)," the agency appropriates works of art in a scheme to assassinate the Cuban leader (hint: death by sculpture).

And, in the piece that bequeaths the show its name, "A Case Study in Schematics, Surveillance and Murder," we are thrust deep into the real-life murder case of abstract painter Mary Pinchot Meyer, a mistress of recently assassinated President John F. Kennedy and ex-wife of CIA official Cord Meyer.

For the ISU show, each piece occupies a gallery wall, for a total of four Thomas Pynchon-worthy narratives riddled with unreliable narrators, paranoia, conspiracies, altered realities and true-life characters

The latter range from the aforementioned Castro to one of JFK's murdered mistress (per the latter, it helps, for inspiration's sake, that Sokolow's cousin once worked alongside accused JFK assassin Lee Harvey Oswald in a New York youth house in the mid-’50s).

Paitz, first who crossed paths with Sokolow when came to ISU earlier in the decade as part of a visiting artist lecture series, was immediately struck by the artist's merging of storytelling and graphics skills.

The result of that marriage is what Paitz describes as "a wild and zany amalgam of fact and fiction," whose narratives wend their way through landscapes that seem both instantly recognizable and removed from reality.

"The best-case scenario is when people stand and spend five or 10 minutes before each piece, which means they are engaged and reading everything," says Sokolow.

She confesses that her text-based work was met with resistance when she was enrolled at the Art Institute of Chicago, where she received her master of fine arts degree.

One of her instructors informed her: "I don't want to look at work I have to read ... it's too much like doing homework."

"I was sort of angry and heartbroken," Sololow admits. "I saw it as a great challenge for the rest of my life."

Instead of moving away from it, "I decided to celebrate it."

Part of the inspiration for her work comes, she says, from her love of literature, "especially the postmodern devices used by Thomas Pynchon and Don DeLillo."

As for the playful strain of paranoia that wends its with through her narratives: Does it come from within her own world-view?

"Ask my husband," she laughs.

At that very moment, he enters the room and she follows suit: "Hey, honey, am I paranoid?"

Seriously, folks, "the paranoia works as a device, and it's used with the humor to make you want to keep reading the work."

Though Sokolow prefers not to force the issue of her work's relevance to the present moment, she does sense the enveloping presence "of what seems like abusive power in the world."

She was first set on the path of fictional realities around 2003 as "a response to post-9/11 fear-mongering ... I noticed a sense of unease among people, who were starting to buy bunkers to install in their backyards."

Flash forward to 2017, "and now it's become 100-times that ... all of a sudden we're all skeptics because there are so many viewpoints, so many versions of the media's stories."

With her work and its relation to the world we live in, Sokolow says she prefers to avoid making direct ties and letting viewers arrive at their own conclusions.

"I don't want to shut down the conversation ... I'd rather open it up. I create the situations and set up lots of different layers. They are vessels anyone who reads them can fill."

Justin Bieber is the latest celebrity ambassador for Balenciaga

Justin Bieber is the latest celebrity ambassador for Balenciaga 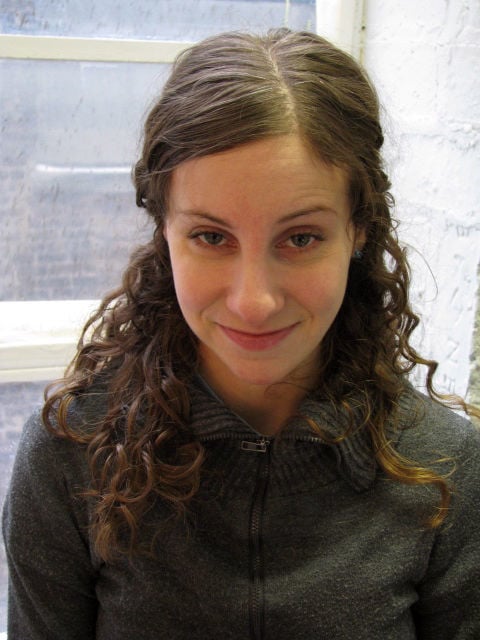