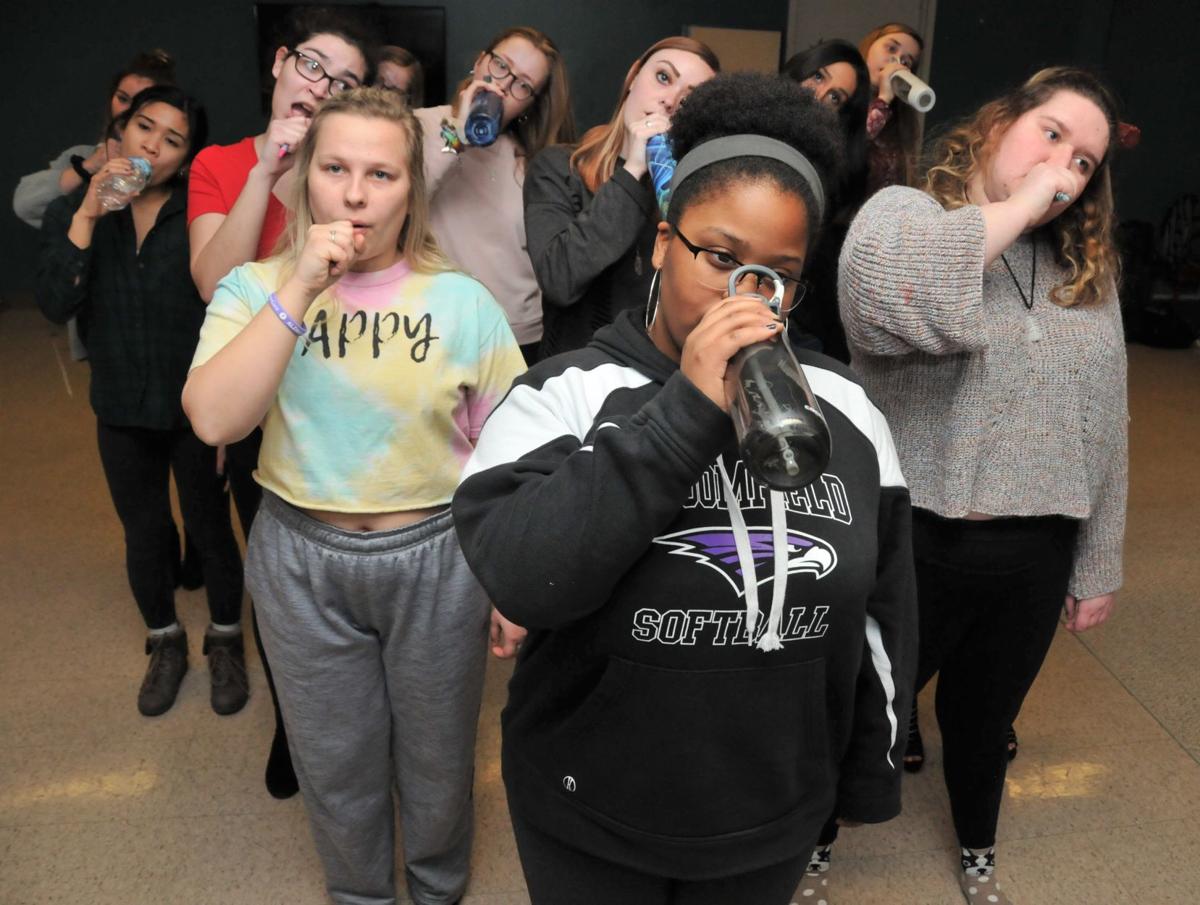 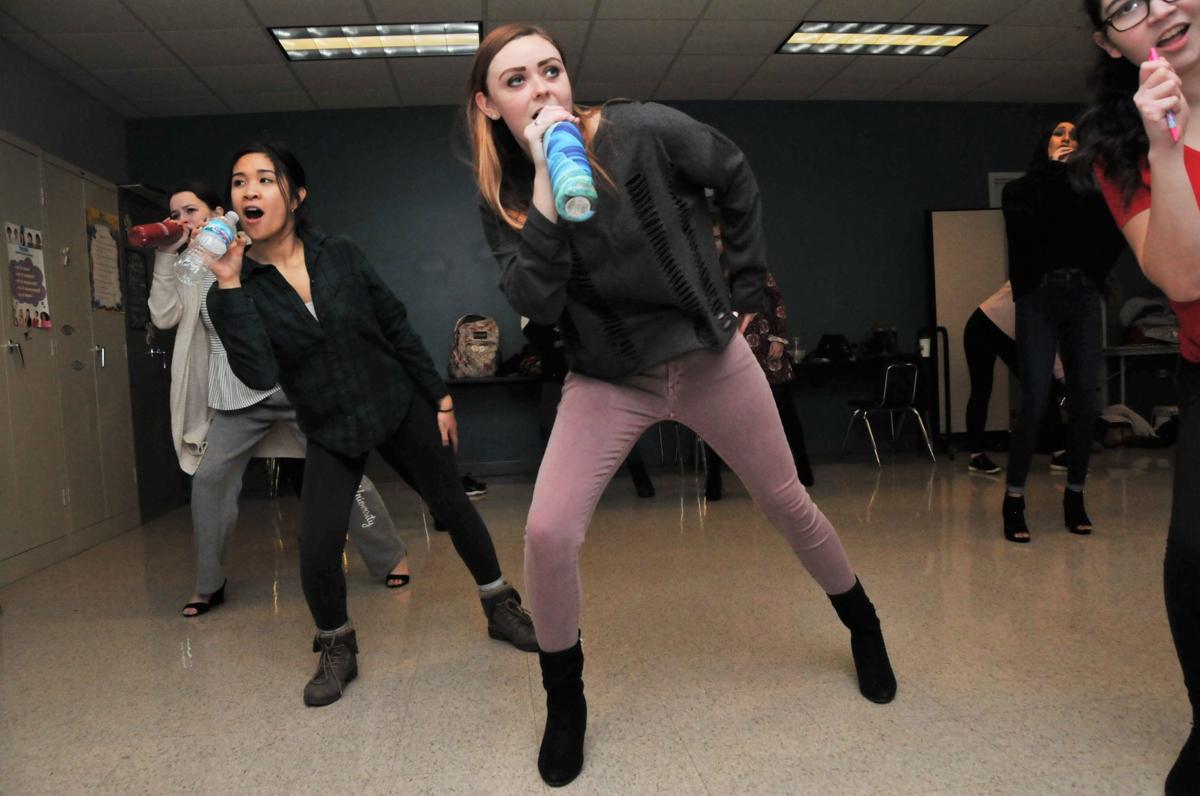 Emma Moran, center, a member of Illinois State University's a cappella group, Secondary Dominance, rehearses with the group. Group members use cellphones, water bottles and pens to replace microphones that will be used in the competition. 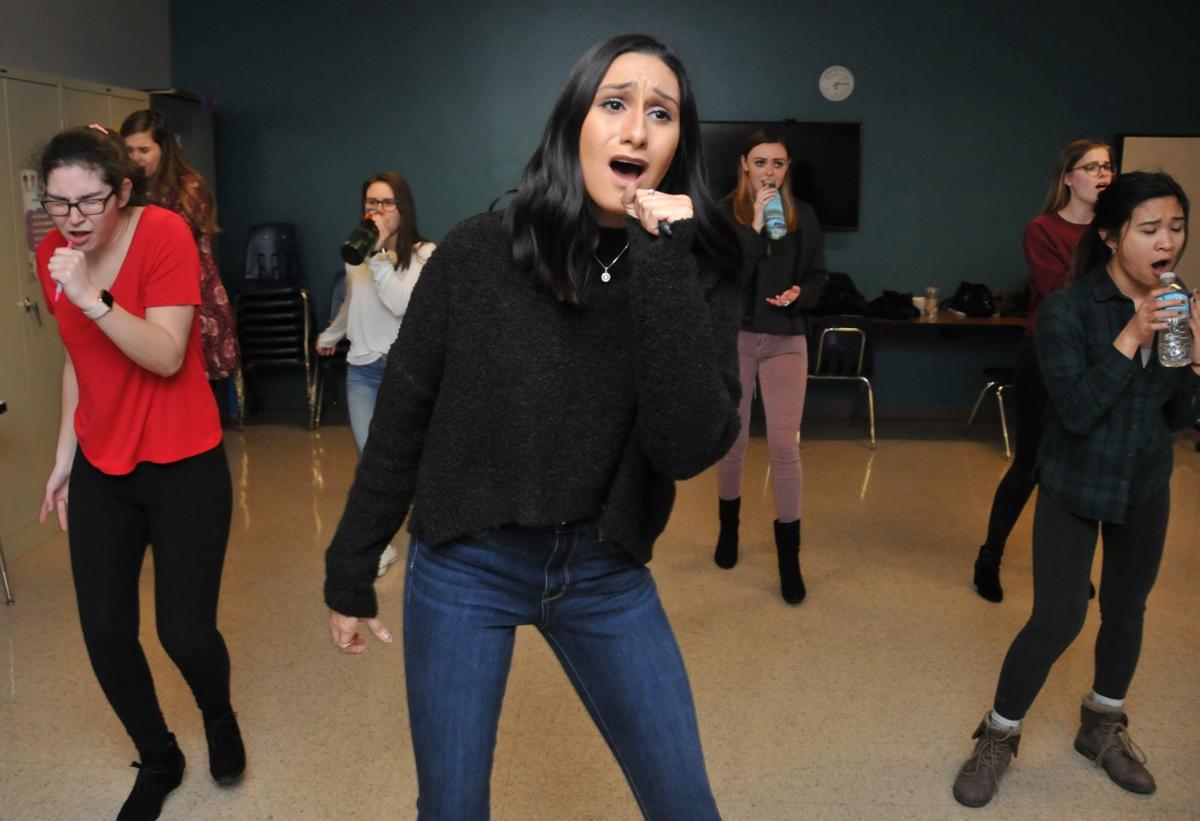 NORMAL — Do you remember the scene in the movie “Pitch Perfect” where a cappella groups come together in an informal “battle,” making up songs on the spot and magically blending their voices perfectly?

That's not exactly how it works in real life.

“We love that it looks so effortless,” said Olivia Watkins, vice president of  Secondary Dominance, an a cappella group at Illinois State University. “But it definitely is a lot of blood, sweat and tears.”

Secondary Dominance and two other groups from ISU — the ISU Clef Hangers and On the Brink of Normal — and Touch of Class from Illinois Wesleyan University will be among nine collegiate a cappella groups competing in the Great Lakes Quarterfinals of the International Championship of Collegiate A cappella from 7 to 10 p.m. Saturday at ISU's Center for the Performing Arts.

ISU's fourth a cappella group, Acafellaz, isn't competing, but is acting as host and will perform while the judges are tabulating their scores.

If you haven't seen “Pitch Perfect” or heard perhaps the best known a cappella group, Pentatonix, you might think a cappella singing is just singing without instrumental accompaniment.

But it's more than that.

“It's really interesting and cool how all of the sounds that are made with instruments are made with our mouths,” said Sam Biga of Plainfield, an ISU junior in public relations who is Second Dominance's president.

The skill with which the groups can mimic the sound of instruments, including percussion, can create the illusion of instrumental accompaniment.

Biga said, “My grandpa came to ICCA last year and asked my mom, 'Where's the orchestra?'”

“It's very much a collaborative environment,” in which group members provide feedback and suggestions for both the music and choreography, said junior Francesca Velcich of Tinley Park, the group's musical director.

That collaboration was evident during a recent rehearsal at First United Methodist Church in Normal as Second Dominance fine-tuned its performance for the upcoming competition.

Watkins, a junior in musical therapy from Buffalo Grove, “There are little parts in it that we all contributed to and have a part of it.”

Choreography is a big part of the competition — from stage movements to hand and arm positions. During rehearsal, the performers held water bottles, cellphones, pens and dry-erase markers to simulate the microphones they will hold in the competition.

There's a lot to think about, Velcich told the group at rehearsal.

“The biggest thing I want you to think about is how much fun you're going to have,” she said.

Velcich, who is majoring in musical education-choral, said she is drawn to a cappella because “I love the challenges it give me.”

Because Secondary Dominance is an all-female group, “we don't have the full range of voices” that mixed groups have, said Watkins. “It forces us to push ourselves to overcome those challenges.”

Biga added, “A female group can be just as powerful as a male or mixed group.”

With the competition nearing, the group's members not only worry about getting their choreography and music right, they also worry about staying in good health.

Velcich told everyone, if they get a tickle in their throat or fear they might be coming down with something, “Call me. I will bring you what you need. I will bring you tea. I will find you in the middle of Cook Hall. I will even go to State Farm Hall.”

On our campus, we support each other,” said Biga. “We all show up for each other's fundraisers.”

She added, “We just want to make ISU proud.”

What: International Championship of Collegiate A Cappella Great Lakes Quarterfinal

Where: ISU Center for the Performing Arts, 351 S. School Street, Normal (southeast side of the quad)

Gobsmacked!: Hit a cappella show with attitude heads to BCPA

In its first-ever U.S. tour, Gobsmacked! doesn't have to spend as much time smacking gob. 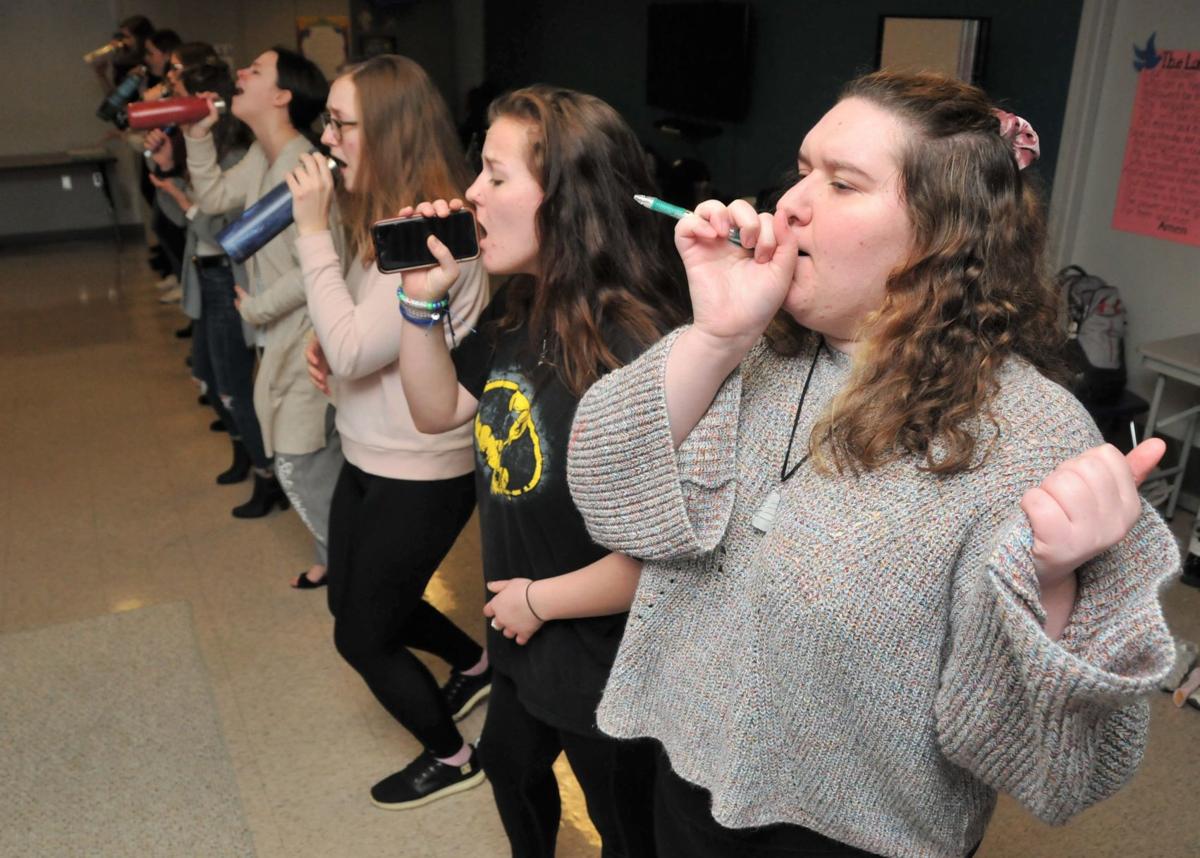 Francesca Velcich, right, a member of Illinois State University's all-female a cappella group Secondary Dominance, practices with a pen in place of a microphone during rehearsal Thursday, Feb. 14, 2019.

Emma Moran, center, a member of Illinois State University's a cappella group, Secondary Dominance, rehearses with the group. Group members use cellphones, water bottles and pens to replace microphones that will be used in the competition. 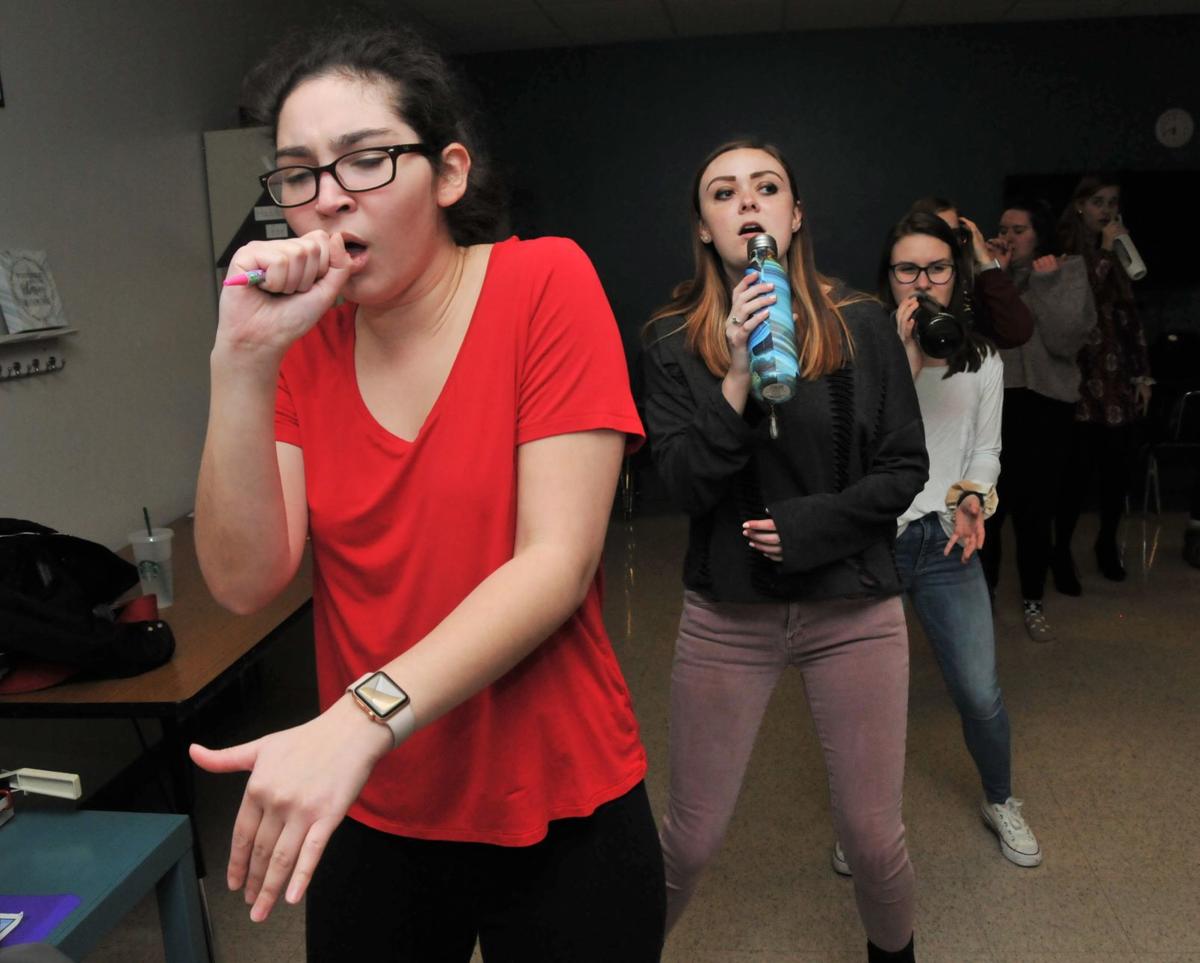 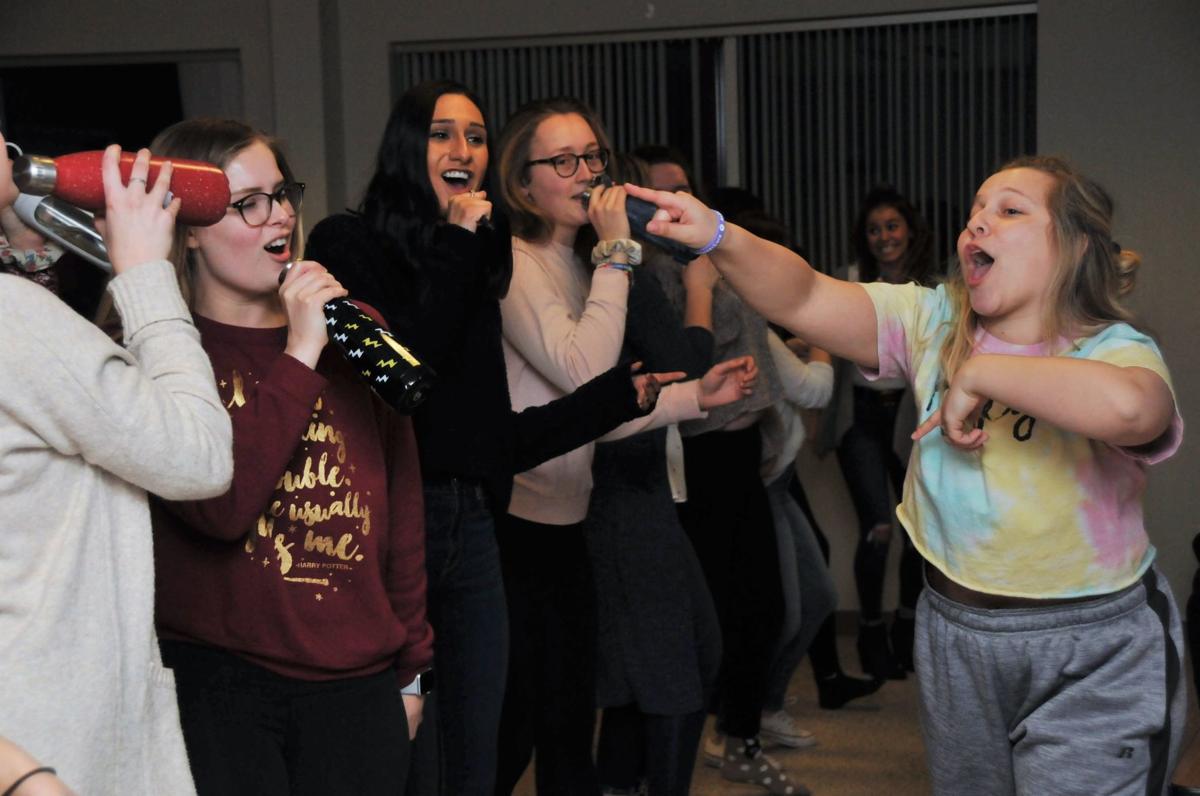 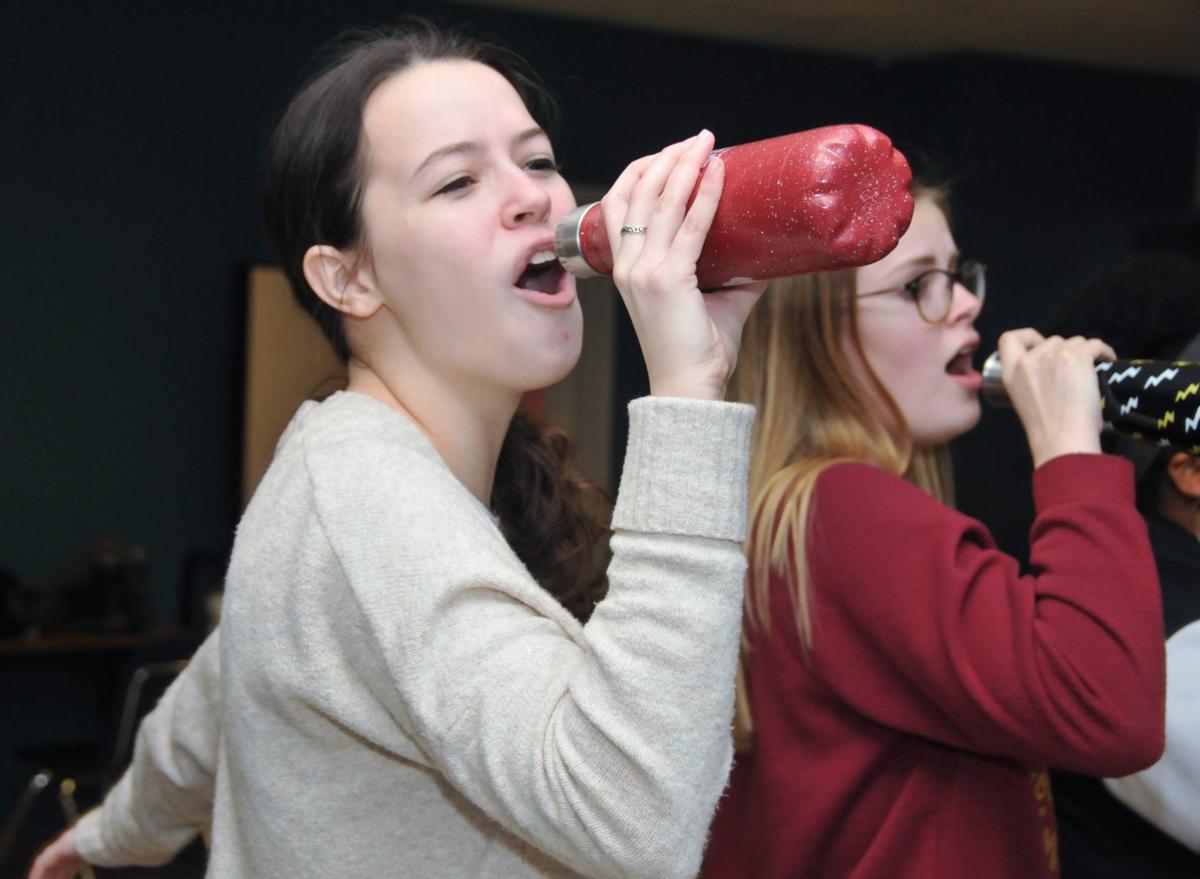 A cappella group member Megan Pellock sings during rehearsal, using a water bottle in place of a microphone.