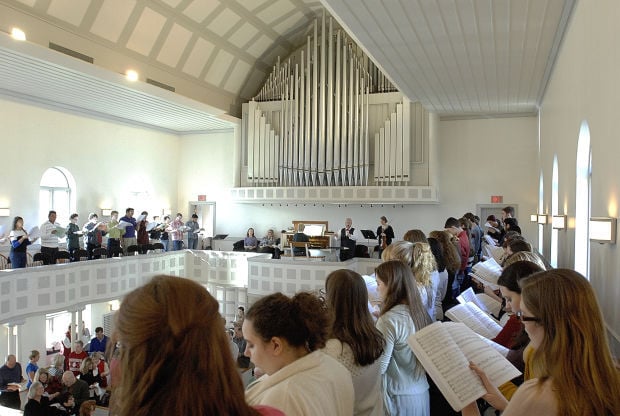 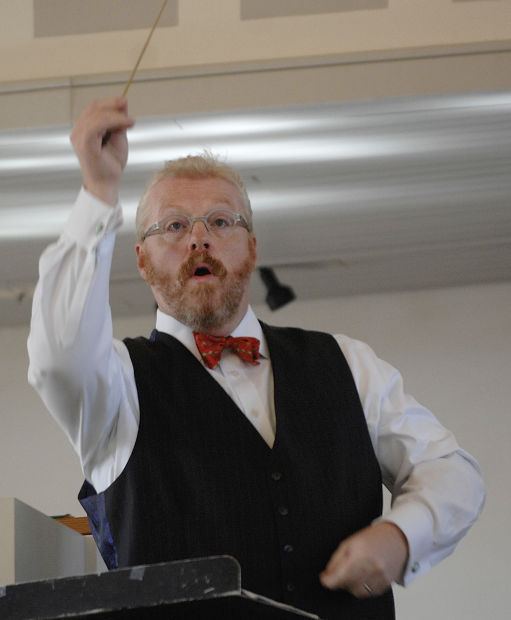 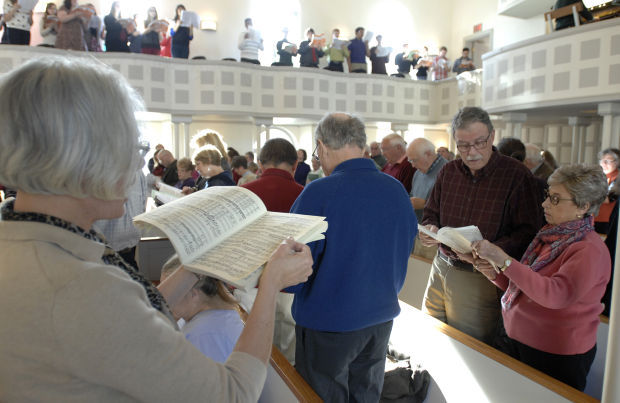 BLOOMINGTON — It didn't matter if you knew the words, could read music or hit the right notes at Wednesday's singalong “Messiah” at Illinois Wesleyan University.

There were plenty of well-trained voices surrounding you, from two university choirs with about 75 members in the balcony of Evelyn Chapel to at least 100 people on the main floor to cover any miscues.

Although the university handed out sheet music for the choruses, many people brought their own scores.

“I have no idea when I last sang it,” said Elaine Cousins of Bloomington. But she pointed out that the price on her score was only $3.

The chapel hosts interfaith gatherings at 11 a.m. the first Wednesday of each month from October through April. December usually focuses on the Christian faith.

This is the second year Handel's “Messiah” was featured as the December chapel event, and like last year, it attracted many members of the community, not just students, faculty and staff.

“Quite a few people have grown up singing parts of it,” said university organist Susan Klotzbach, who provided the musical accompaniment, along with visiting assistant professor Lisa Nelson on the violin and viola.

“They can at least sing a couple of 'hallelujahs' or hum along,” Klotzbach said.

Yes, the well-known "Hallelujah" chorus concluded the performance even though the rest of the concert was limited to the Christmas portion of “Messiah.”

“You're not allowed to leave it out,” joked Provost Jonathan Green, who served as conductor.

Although he has been IWU's provost and dean of faculty since 2011, Green is a composer whose background and academic degrees are in music.

“I had a music professor who called it (the 'Hallelujah' chorus) 'the national anthem of God,'” Green said.

Junior Nicki Chlebek of Lombard, an ecology and sociology major who was handing out programs and scores, said, “It's so neat to see all the community members show up.”

The enthusiasm of all involved was evident, from community members who greeted each other with hugs and smiles to the performers themselves.

This is the final week of classes for students and choir members also are preparing for Sunday's Christmas concert.

Kelsey Maka of Mokena, a sophomore in voice performance and international studies who is an alto in the Collegiate Choir, said of the balance between studying and music practice, “It's difficult, but it's worth it.”

Chaplain Elyse Nelson Winger triggered laughter when she asked people to join in the choruses, but leave the solos to the soloists, who were faculty and staff members.

One of those soloists, Jennifer Hilbish Schuetz, who teaches applied voice, broke into song in the chapel vestibule when asked her favorite part of the music.

“I've probably sung it 35 times,” Schuetz said of “Messiah,” but she said it never gets old.

“It's beautiful music. The words are so beautiful,” she said, adding that she likes the big choruses in the singalong.

In remarks before the concert began, Winger noted how the story told through the music still has the power to call on people to reflect on “Jesus' ways of mercy, justice and of peace.”

Is a retail credit card worth it?

Illinois Wesleyan University celebrates the holiday season with a sing-a-long presentation of Handel's Messiah at Evelyn Chapel on Wednesday.