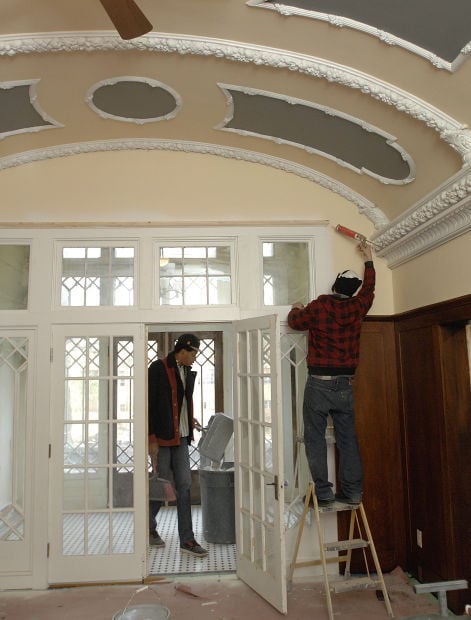 In this Nov. 18, 2014, file photo, Brandon Stokes, left, and Joseph Jones, both of Bloomington, work on one of the apartments in The Oaks at 301 E. Grove St. in Bloomington. New owner Keith Thompson has renovated the site, which features the 1860s Asahel Gridley mansion and apartments from 1937. 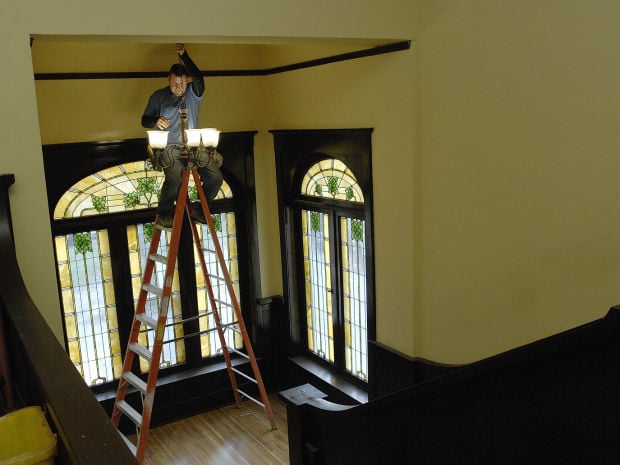 Tim Goggin of McLean, with Jeff Anderson Electric, hangs a light fixture in the stairway between the first and second floors in The Oaks.

BLOOMINGTON — Keith Thompson is a self-admitted "sucker for historic properties."

So when Diane and Bud Sullivan approached him in 2008 about investing in the historic Asahel Gridley property at 301 E. Grove St., neither Thompson nor his wife, Diane, could resist. Gridley was a state senator credited with getting the Illinois Central Railroad to roll through Bloomington, he was a friend of Abraham Lincoln and the city's first millionaire.

Granted, the 1860s Gridley mansion and the 1937 apartment buildings in front needed a lot of work, but Bud Sullivan was a contractor and Diane Sullivan, then president of the Old House Society, was passionate about restoration work, so the Thompsons were convinced it could work.

But two years went by and little work had been accomplished. The city began citing numerous code violations. By 2012, the property went into foreclosure — the Sullivans owed $807,558 on the property, according to legal documents. Their original loan from Thompson was $644,500. Diane Sullivan had already moved from the community and Bud Sullivan moved away later.

Thompson was the highest bidder at a foreclosure auction ($700,000) and the property — and all of its problems — were now his.

"It came down to an emotional decision rather than a financial one — stupid for a banker," said Thompson, a senior loan officer with Mortgage Services Inc. "I'm sure someone would have knocked it down."

But now, about $1 million later, the renovation is complete and Thompson can focus on finding tenants for the mansion apartments.

One of the eight apartments already is taken — by Thompson and his wife.

"I'm glad he took it on," said Laura Walden, coordinator of the Old House Society's Architectural Salvage Warehouse. "It was too overwhelming for anyone else. He's done a great job. Hopefully it will last forever."

Thompson faced a steep challenge from the start. The city had more than three pages of code violations that needed correcting. In addition, a steam pipe had broken in the mansion basement and there was water and/or condensation dripping from the walls and ceiling; there was also mold in the house. Some of the once-beautiful wood on the walls of the staircase had been warped. Many of the wood floors also were damaged.

The day after the property officially became Thompson's, he had to hire a company to clean up the asbestos in the basement — a $60,000 job.

Since then, Thompson has replaced all the plumbing, heating and electrical in the apartment building and mansion. New roofs and gutters have been installed; the chimney rebuilt and tuckpointed; windows reglazed and virtually everything repainted. Thompson was approved for a $50,000 Harriet Fuller Rust Grant through Bloomington's Historic Preservation Commission that helped finance some of the work.

Norm Hiser of Lexington, who does woodworking as a hobby, made new corbels for those that were missing.

"It's cool to have something you crafted on the Gridley mansion," said Walden, a friend of Hiser.

Walden and the Architectural Salvage Warehouse worked with Thompson to find matches for damaged wood and flooring in the mansion.

The work has revealed or enhanced many of the home's original features. A dropped ceiling was taken down in one of the apartments to reveal the original wooden beams on what once was a covered porch.

"Everything we could retain we did or brought it back in," said Thompson.

Damaged wood on the walls of the Gridley dining room has been repaired and the decorative design on the ceiling highlighted with paint.

Thompson hired Marilyn Johnson of Stained Glass Designs to rebuild the dynamic stained glass window in the landing of the grand staircase. Johnson also is making a companion piece for the arched window above the front doors to the mansion.

Nine of the original 10 fireplaces are still intact. Thompson purchased inserts so they function as a heat provider. He also had storm windows built for the inside of the windows in the second-floor sunroom  — now a kitchen for one of the apartments — "to keep with the same exterior look."

Thompson's next focus will be finishing the fencing around the property, changing the driveway so there's more green space and turning the former carriage house into a garage.

"I'd like it to be a very nice residential environment," he said.

If you're wondering what the renovated Gridley mansion looks like, you'll get the chance while also helping Easter Seals.

Keith and Diane Thompson have partnered with Easter Seals to offer a house tour — complete with actors portraying Asahel and Mary Gridley.

Cost: $10 per person with all proceeds going to Easter Seals

Extras: The tour will include local artists and their artwork, Lincoln experts and light refreshments.

Log on to www.pantagraph.com for more photos from The Oaks.

Is a retail credit card worth it?

In this Nov. 18, 2014, file photo, Brandon Stokes, left, and Joseph Jones, both of Bloomington, work on one of the apartments in The Oaks at 301 E. Grove St. in Bloomington. New owner Keith Thompson has renovated the site, which features the 1860s Asahel Gridley mansion and apartments from 1937.

Tim Goggin of McLean, with Jeff Anderson Electric, hangs a light fixture in the stairway between the first and second floors in The Oaks.