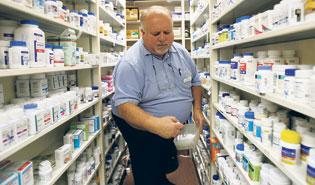 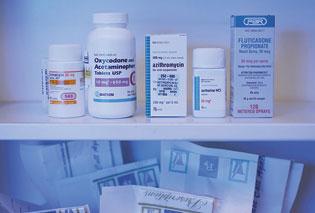 WICHITA, Kan. — Judy Beals doesn't have to take a lot of medications, but when she does need medicine, she tries to get the generic form. She has no qualms about straying from the brand name. "I don't pay nearly as much," the Wichita, Kan., resident said.

Consumers such as Beals have more choices than ever when it comes to generics, which are lower-cost versions of brand-name drugs.

So far this year, the U.S. Food and Drug Administration has approved 67 drugs for first-time use in generic form, including Xanax XR for anxiety, Flonase nasal spray for seasonal allergies, Percocet for pain, Lexapro for depression and anxiety, Zocor for cholesterol, Zoloft for depression and anxiety, and oral suspension of Zithromax, an antibiotic for children. (For a full list, go to www.fda.gov/cder/ogd/approvals).

And more are on the way.

Brand-name drugs for which patents will expire in the next few years include Wellbutrin XL for depression and smoking cessation (this year), Imitrex for migraines (next year), Advair for asthma (2008), Zyrtec and Clarinex for allergies and Valtrex for herpes (2009), according to the Generic Pharmaceutical Association.

Patents protect the company that introduced a drug. Companies that wish to bring a generic to market can wait until the patent expires or, in some cases, challenge the patent.

That means savings for consumers, especially when multiple companies offer a generic form and compete against each other. In addition to first generics, the FDA has approved dozens of applications this year from companies wanting to offer generics already on the market.

Michael Polzin, a spokesman for Walgreens, said about 60 percent of prescriptions filled by the chain are generics.

"That's ticking up a couple percent every year," he said.

Use of generics grows

Generic drugs represented 66.4 percent of prescription doses sold in 2004, compared with 61 percent in 2001, Scott Gottlieb, deputy commissioner for medical and scientific affairs for the FDA, said in an April speech.

IMS Health, the world's leading provider of market intelligence to the pharmaceutical and healthcare industries, says brand-name medication with annual sales of about $64 billion will come off patent in the next five years.

How does the process work?

Andrea Hofelich, director of media relations for the Generic Pharmaceutical Association, said when a company is interested in making a generic form of a brand-name drug, it files an "abbreviated new drug application" with the FDA.

The process is abbreviated because in most cases, clinical trials are not required. The thinking is that the brand-name drug has been on the market long enough — patents typically are for 20 years — and has proved to be effective and safe.

The generic drug must be what's called "bioequivalent." It must contain the same active ingredient and be identical in strength and dosage, among other requirements.

About 770 generic applications were pending by the end of fiscal year 2005.

The association says it is concerned about a backlog of applications at the Office of Generic Drugs, which processes applications.

Gary Buehler, director of the office, told a Senate committee in July that the number of applications had increased by 150 percent during the past five years.

Since fiscal year 2001, funding for the FDA's generic drug program had increased by 66 percent, "a clear sign of the important role played by OGD," he said.

Boyd, the owner of Consumer's Pharmacy, said he has a few customers who shy away from generic drugs, "bite the bullet" and pay for the brand name.

Generics are as effective as brand-name drugs, Dennis Grauer, the interim chairman of the pharmacy practice department at the University of Kansas, said last week while discussing a plan by Wal-Mart to offer 30-day supplies of 291 generic drugs to consumers for $4 each.

Boyd said his pharmacy won't automatically fill a prescription with a generic drug unless "we know the patient wants it. We know most of our customers pretty well and can tell by looking at their profile if they like the generic."

"Most of the insurance companies are really going to sock it to them on their co-pay," he said.

A formulary is a list of drugs "that we have seen and viewed as the best drugs in those classifications that are reasonably priced and efficient for the disease or condition that they're prescribed for," said corporate communic ations manager Mary Beth Chambers.

The most expensive co-payment is for brand-name drugs not on the formulary.

"As generics come on to the market, we certainly look at ways to encourage people to move to the generic drug," Chambers said.

As an example, Blue Cross and Blue Shield may move a drug from the brand-na me formulary to the non-formulary to encourage customers to use generic.

Many companies do that, she said.

Does your drug have a generic?

Wondering if a drug you take is available in a generic form?

The easiest way to find out is to ask your doctor or pharmacist, the Generic Pharmaceutical Association says.

You also can use an online resource such as the U.S. Food and Drug Administration’s “electronic orange book," which lists drugs, at www.fda.gov/cder/ob.

For example, check out Zoloft, a medication for depression and anxiety.

The Web site shows that the active ingredient is sertraline hydrochloride.

Then looked up that ingredient to find the generics.

Watch now: Tips to keep in mind after you get your COVID-19 vaccine

Historic brewery is making a case for reusable beer bottles

Historic brewery is making a case for reusable beer bottles

How to prevent obesity in senior dogs

How to prevent obesity in senior dogs

"What is most difficult to control is what is outside of our schools," MCHD spokeswoman Marianne Manko said. "We are still seeing kids who are contracting COVID-19 outside of the school — traveling, family events, sporting events, that kind of thing."

As of last week, McLean County has not only caught up to some of its less-populous peer counties, but also Illinois' overall percentage of fully-vaccinated people: On Thursday, just more than 24% of the state's population was fully vaccinated, while McLean County sat at 23.72% Thursday afternoon.

More than 200 cases of COVID-19 were confirmed over the weekend, according to new data from the McLean County Health Department.

5 things to know about COVID-19 variants

More than 1,500 cases of COVID-19 variants have been reported statewide.

As of Saturday afternoon, 104,636 doses of COVID-19 vaccine have been administered in McLean County, with 44,490 of the population, or 25.74%, considered fully vaccinated, according to IDPH.

Another 52 cases of COVID-19 confirmed in the past day brings the county's overall total of cases near 17,000.

Two more McLean County residents have died and two more have been hospitalized due to COVID-19.

Why Illinois vaccination rates vary so much

The state for weeks kept sending doses to places where it was a struggle to sign up enough people to get vaccinated, while other areas — such as greater Chicago — scrambled to find enough doses for the flood of people eager to get a shot.

In a statement Wednesday, the McLean County Health Department said the two new clinics are aimed at increasing access for residents who can't make the daytime hours or need extra accommodations.