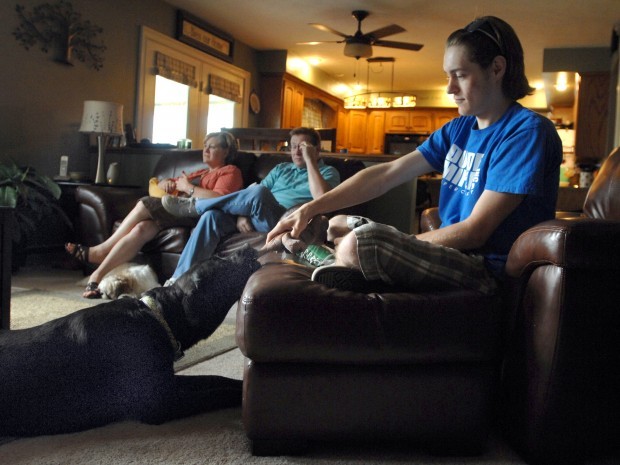 Coady Coughlin, 20, plays with his dog, Zoey, while sitting in the living room with his parents, Pat and Karen Coughlin of Normal on  June 13. Coady is being treated for hemochromatosis, a heredity disease the results in excessive iron in the body. 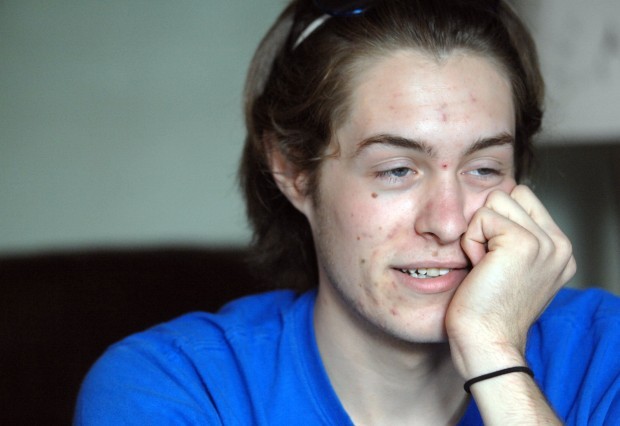 Coady Coughlin, 20, talks about the symptoms of hemochromatosis during an interview.

NORMAL — Coady Coughlin had no energy to care.

“I felt tired all the time,” the 20-year-old Normal man recalled of a good portion of his late-teen years. “I couldn’t do anything. I had no ambition, no energy.”

After tests for mononucleosis, a thyroid condition and other medical maladies came back negative, his parents — Patrick and Karen Coughlin of Normal — began to wonder if his condition was medical.

Test results indicated that Coady has hemochromatosis, a hereditary disease that results in excessive iron in the body. Also known as iron overload disease, it may affect one in 200 Americans.

Despite its prevalence, the disease is little-known.

“We hear about anemia (a disease of too little iron), but we don’t hear about its opposite,” Karen admitted.

“It’s under-diagnosed in the general population,” agreed Abadeer, who has diagnosed about five patients with the disease in the past couple of years. “I don’t think it’s on peoples’ radar screens.”

Abadeer said when patients present with symptoms such as persistent fatigue, joint pain and upper right abdominal pain — or when patients have a family history of hemochromatosis — he orders blood work that includes a total iron panel.

Coady was diagnosed before excess iron began to damage organs, which generally happens in middle age. Treatments mean that he is on the road to recovery, although he is not yet 100 percent.

The Coughlins want to tell Coady’s story to help other people to be aware of symptoms and to advise that they request a total iron panel if they or a family member is experiencing those symptoms.

“A simple blood test is all that is required,” Karen said.

“Since I was so fortunate to be diagnosed early, I want to spread the word,” Coady said.

Before his hemochromatosis symptoms, Coady was energetic.

He did parkour, which is the non-competitive sport of vaulting, rolling, climbing and jumping over obstacles. He played guitar and said he was a good student.

All that began to change when he was 16 years old and a sophomore at Normal Community West High School.

“There was a two-week period in the fall when he missed school because of excessive tiredness,” Karen said.

He bounced back but missed more school during his junior year because of fatigue, joint pain and achiness. Symptoms came and went.

“Senior year was awful,” his mother recalled. “Some days, he’d sleep in and go to school later.” But he also missed a lot of school days. Sometimes, he’d fall asleep in class.

He stopped parkour and skateboarding. “I didn’t feel like running around and moving,” Coady said.

Abadeer tested Coady for mono and a thyroid condition and tests came back negative.

“I was worried,” his father said. “Was he experimenting with drugs and alcohol? What was wrong with my son?”

“I wanted to care but I didn’t have the ambition or willingness or energy,” Coady explained.

“He graduated, but just barely,” his mother said.

After graduation, his symptoms progressed. After he turned 19 in October 2010, Abadeer ran a blood test that showed Coady had high iron levels or hemochromatosis.

The Iron Disorders Institute said hemochromatosis is a metabolic disorder in which individuals can absorb as much as four times more iron from their diets as people with normal iron metabolism. The excess iron can’t be excreted. So after three to five decades, iron accumulates to toxic levels in the liver, heart, joints, pancreas and bone marrow.

The disease often isn’t diagnosed until people are in their 40s and 50s because that’s when organs begin to fail. Without treatment, death by organ failure, heart attack or liver cancer can result.

Coady, his sister Lauren, 23, and their parents underwent genetic testing. Patrick and Karen have the hemochromatosis gene, Coady has the disease and Lauren is a carrier. That means her children must be tested when they become adolescents.

Asked his reaction when the diagnosis was confirmed, Coady said, “Oh, there is something wrong with me. Cool.”

“When you get an answer, there is some relief,” his father explained. “Now, what do we do?”

“After the first couple of phlebotomies, he became Coady again,” his father said.

Since then, he has had treatments once every few months. When his energy begins to wane and he needs more sleep, he returns to Abadeer, who does another blood test. When Coady’s iron levels are high, he undergoes another blood letting at Advocate BroMenn Medical Center.

In addition, Coady tries to avoid iron-rich foods, such as red meat and some breakfast cereals.

The Coughlins hope Coady’s energy levels eventually will balance out. Coady, who has a part-time job, wants to go to college to study music, art or culinary arts.

“This (the disease) is putting his life on hold right now,” his mother said. “It’s holding him back until we can get a better handle on it.”

“It’s frustrating,” Coady said. “But everybody’s got problems. This is just mine.”

Coady Coughlin, 20, plays with his dog, Zoey, while sitting in the living room with his parents, Pat and Karen Coughlin of Normal on  June 13. Coady is being treated for hemochromatosis, a heredity disease the results in excessive iron in the body.

Coady Coughlin, 20, talks about the symptoms of hemochromatosis during an interview.