Is your spouse's stuff driving you crazy?
0 comments
Share this
{{featured_button_text}}
1 of 2 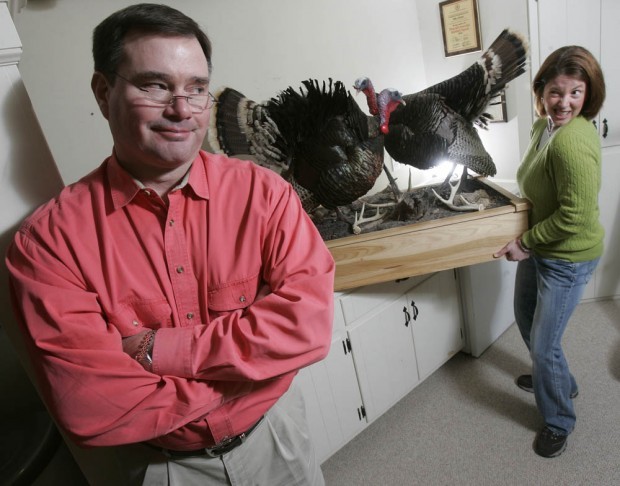 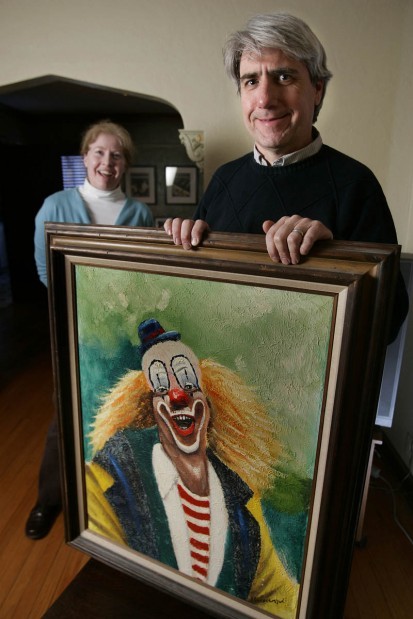 John Sheldon's mother gave him the clown painting about 40 years ago. John's wife, Susan Patterson, has persuaded John to keep the painting in the basement of their Kansas City, Mo., home. (McClatchy Newspapers, Tammy Ljungblad)
By Lisa Gutierrez | McClatchy Newspapers

To every wife who has ever threatened to throw out her husband's tools ...

To every husband who has ever wanted to give away his wife's shoes ...

She feels it every time she walks down to her nicely finished basement in Leawood, Kan., and comes face-to-face with two taxidermist-stuffed, 20-pound turkeys standing on the counter.

"I bet it's too big for Cabela's or Bass Pro even," Jenny grouses.

When we asked readers what stuff of their partners' they would toss right out of the house, Jenny sent us a picture of the two birds in her basement.

Her husband, Mike, bagged them about five years ago on a hunting trip in the Black Hills of South Dakota.

To Mike, who has hunted since he was a boy, they are beauties -- two toms with longer, prettier feathers than those found on turkeys in this neck of the woods.

To Jenny, they're a "monstrosity."

"They're like a trophy," she says. "He's just displaying his prowess in the hunting field, I guess."

Mike took them to a noted taxidermist in northern Missouri and paid $900 to have the two birds mounted together on a platform, like they're squaring off.

He paid a higher price when they arrived at the house: He hadn't told Jenny about them.

"What do they say? It's easier to ask for forgiveness than permission," he says, with a laugh.

"I've never forgiven him for this one," Jenny says, without a laugh.

She would never dare try to get rid of them, though, "because something of mine would turn up missing."

What do married folks argue about? Money is always at the top of those surveys, followed closely by the kids, the in-laws and that dirty little three-letter word -- sex.

But what about that dirty little five-letter word?

"While there are many things of my husband's I'd like to get rid of, his framed and matted George 'Iceman' Gervin poster hanging front and center in our basement is probably my least favorite," one woman e-mailed us.

"Oh, and the vintage Bud Light beer can phone. Are you kidding me?!?!"

Anyone who has ever shared living space with another human being knows the hard feelings, bitterness and resentment that stuff can create. They even make TV shows now about those clashes.

(See: "Clean House" and "Merge," where a designer helps newlyweds decide whose "stuff" makes it into the conjoined household.)

But boy, check out the flood gates we opened with one innocent question: What of your mate's stuff would you throw away?

• "A collection of 33 beer steins. THIRTY-THREE!! How do you decorate around that?"

• "My husband has all his college books and the spiral notebooks lined up on the lower three shelves of our bookcase. He's been out of school for 20 years ..."

We fielded lots of grievances -- almost all from women -- about stuff that has long outlived its expiration date, like the 500 pounds of old weights and the weight bench collecting dust in one woman's Independence garage.

They belonged to her husband when he was a teenager.

She confessed that on more than one occasion she has been tempted to throw them in the trunk of her car and dump them on a deserted roadside.

She needs to meet the woman in Gladstone, Mo., whose husband keeps a 1918 truck frame on a table on the far side of their finished basement -- because the other parts and big rims for said truck are stashed under the basement stairs.

They've been there for 25 years.

"Did you know that there are people in this world that collect mopeds?" grumbled another local wife to us.

"Not the cute, fun and zippy version you are picturing in your head with fashion colors and cute European men driving them.

"I am talking about pedal mopeds that many 30- to 40-year-olds drove around with the orange flat on the back when they were too young to drive but old enough for a motor vehicle that capped out at 35 mph... I do really hate them."

Marilyn Scovill in Kansas City, North, dearly loves her husband, Eugene, a retired police officer. But she really could do without the more than 5,000 Gold Medal paperback books he has been collecting since they got married in 1952.

"He has kept them so neat, and they're all in their little individual plastic wrappers that he's put them in," she says. "And now he's built nice drawers for them all to fit in. He's really taken good care of them."

It's just that she dreams of the day she can pull the car into the garage without having to worry about hitting all of his custom-built book closets out there.

"I couldn't throw them out; he'd divorce me," she says, laughing.

Send out the clowns

When Susan Patterson took her husband for better or worse, the "worse" part was the clown painting that came with him.

She didn't say anything about it when they were dating. But she really hated that big creepy painting of a clown with orange Bozo hair and blue hat hanging in his Prairie Village, Kan., house.

"I couldn't quite believe that a grown man would have something like this, that anyone would have anything that ugly hanging in their house," says Patterson, an exhibitions graphic designer at the Nelson-Atkins Museum of Art. "I find clowns kind of creepy anyway."

Her husband, John Sheldon, a collections manager for Zurich, admits that the clown art is ugly. He was a young boy living with his family in the Netherlands when his late mother bought it from a street vendor.

"It's about 40 years old. I got it when I was 8 years old," he says. "I didn't like it when I first got it, to tell you the truth. But I got attached to it because of the sentimental attachment.

"I don't have a lot of things to remind me of where I lived as a kid. When you grow up in a military family, you don't have those places you can go to that remind you of your childhood. So that's a little piece of Holland I carry around with me, I guess."

That's why our stuff isn't just stuff, says Susan Eeds, a Kansas City counselor who works with couples and individuals.

"Stuff represents emotions to us, and that's why this is sticky," she says. "Psychologically speaking, our stuff has personal meaning. And when that gets stepped on, it doesn't feel good."

Because she knows why her husband feels sentimental about it, Patterson says she would never ask him to throw the clown out.

But she did put her foot down when he wanted to hang it in their bedroom.

"I just couldn't look at that thing every day," she says, "so it's down in the basement."

What's your spouse hanging onto that you'd really like to get out of the house? Tell us here.

Dr. Fauci explains the efficacy of the current vaccines against COVID-19 variants

Dr. Fauci explains the efficacy of the current vaccines against COVID-19 variants

Junk foods that are surprisingly vegan

Junk foods that are surprisingly vegan

What's your spouse hanging onto that you'd really like to get out of the house? Tell us here

John Sheldon's mother gave him the clown painting about 40 years ago. John's wife, Susan Patterson, has persuaded John to keep the painting in the basement of their Kansas City, Mo., home. (McClatchy Newspapers, Tammy Ljungblad)
© Copyright 2021 The Pantagraph, 205 N. Main St. Bloomington, IL | Terms of Use | Privacy Policy
Powered by BLOX Content Management System from TownNews.com.
You don't have any notifications.