BLOOMINGTON — Local bike retailers say patience and an open mind will take customers far as shop owners do their best to manage a second year of pandemic-related product shortages that none of them could have anticipated.

Exercise-starved and cooped-up Americans, searching for ways to deal with COVID-era restrictions, turned to the sport of cycling last year, depleting inventories across the country.

In a typical year, Bloomington Cycle and Fitness shop owner Caryn Davis would normally run a sale to make sure she wasn’t sitting on too much inventory at the end of the year.

In 2020, that wasn’t necessary — and it won’t be necessary or possible this year, either.

“We saw our normal spring rush times 100,” she said. “We sold almost every single bike in the store.”

Asked how she restocked her inventory after a such a spike in demand, Davis said, simply, “I can’t.”

The shop’s “bread and butter” is the entry-level bike that’s less than $1,000 and aimed at a customer who’s new to cycling, which Davis said is exactly the product that’s been “hardest to get and hardest to keep.”

“Even under $2,000 is hard for me to get my hands on, right now, and it almost feels worse than it is, too,” she said. “As things start trickling in, as soon as they get it, we've got a list of people waiting for it, so it's gone immediately. So those people that just walk in, still wanting to see things or wanting to try things — I just can't.”

Staff at the shop work alongside customers to learn what they’re looking for in a bike and suggest an alternative to their original idea or place them on a waiting list for when the requested product does arrive.

Justin Tilford knows how frustrating that can be while shopping. When his wife decided last fall that she was interested in mountain biking, he thought they'd go out and purchase one.

Turns out, it wasn't that simple.

"I came through all of the shops -- I probably bothered them a lot because I'd come through once a week, like, 'Hey, you got any bikes in stock?' They'd say, 'Nope. Nope. Nope.'"

When he finally did get a bike, he said, it was a "lucky break."

"I just happened to be in Champaign for a tennis tournament and there was this bike shop really close by," he said. "I just went to see what they had and they happened to have one of the ones I was looking at."

Vitesse Cycle Shop owner Chris Koos said that, mostly, customers have been understanding of the situation shop owners are in, realizing it’s not an individual shop or business management issue.

“For the most part, they understand that it’s not just one brand — it’s all bicycles,” said Koos, who is also Normal mayor.

Each of the Twin Cities’ three bike shops sell different brands of bikes, meaning that, while you can buy a Trek bike at Vitesse, you can’t buy a Specialized bike there, since that's what Davis sells at her shop.

Because much of the bike stock is imported into the U.S., the supply issue affects all three of Bloomington-Normal's shops.

On Thursday, “we just got the notification that Shimano, which is the major component in the bike industry, closed their Malaysia factory — which is very, very important — for COVID restrictions,” Koos said. “In Southeast Asia, there’s resurgent COVID, having to do with the Delta strain. And that’s going to affect us.”

Even though it’s the second year of pandemic-related delays, some customers are still frustrated by the situation.

“People aren’t used to that,” Koos said. “There are bikes that, if we put out an order today, we wouldn’t get them until 2023.”

Eventually, shop owners hope, supply chains — devastated in progress by closed ports during the pandemic and marked by higher shipping costs — will catch up to demand, which NPD estimates may be falling as of this year.

“With April sales down 22%, compared to the same month one year ago, it is easy to assume that the bike sales boom is drawing to an end,” the group said in a news release. “After all, the declines align with the recovery of the U.S. economy, as the effects of the pandemic are mitigated.”

In the meantime, some customers — and, concurrently, shop owners — have pivoted to having older bikes repaired while they wait on new bikes to be restocked.

Parts, too, have been affected by the backed-up supply chain, but the issue isn't as severe as it is with bikes themselves, store owners say.

“It’s sort of a silver lining: We’ve been getting repairs out in less than a week, which is unheard of,” said Wilson Cycle co-owner Michael Wilson. “We’re a lot more caught up with repairs this year than we ever have been during this season. I think that’s because we don’t have as many bikes to sell.”

Wilson hesitates to call what’s happened to the industry a “shortage,” instead seeing the issue as one that’s primarily just an issue of delays or back-ups.

It’s not that the bikes don’t exist anymore or will never come back, he said, it’s just taking longer than usual.

Section of Constitution Trail to close for bridge repairs

Suppliers “have all of the bikes that they would usually make in a year,” he said. “They’re there. They’ll get here, it’s just not as quick as people want them.”

Bicycle Retailer and Industry News, a trade publication, estimates the back-up could extend into a third year, lasting until mid-2022.

That leaves shop owners left to wait, improvise and help customers "as best as we can," Davis said.

"We're doing OK," she said. "But it's so uncertain. We're here to serve our customers — like, we want people to ride bikes because we all love it so much. We just can't serve our demand, and that's kind of disheartening every day."

Keej retired from the McLean County Sheriff’s Department in May 2018 and died July 2 due to complications with his spine, the department said in a social media post.

Workers with Applied Research Associates, Inc. are collecting data on Normal's streets to create a database that will aid in planning and prioritizing future road repairs and maintenance.

A new wind farm will be coming to McLean County, as county board members Thursday approved a Chicago company’s application to build 64 wind turbines in the county’s southeast corner.

2 FruGALS Thrift in downtown Bloomington celebrated its five-year anniversary this month, marking a milestone that not many small businesses can tout. 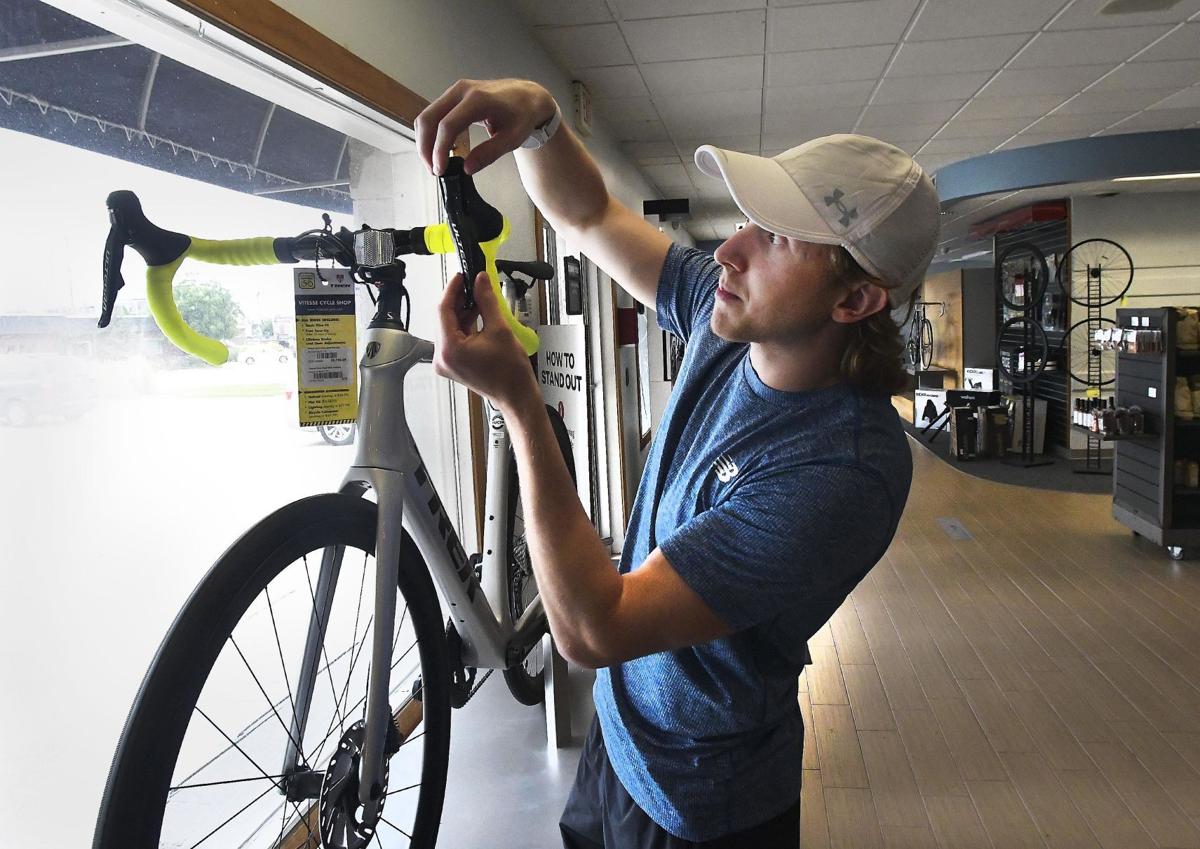 Noah Neace, social media manager for Vitesse Cycle Shop in Normal, on Thursday examines a brake lever that is just one of several critical parts in short supply across the world. Neace said while frames are readily available, critical system parts shortages have made it difficult to carry a selection of bikes locally. 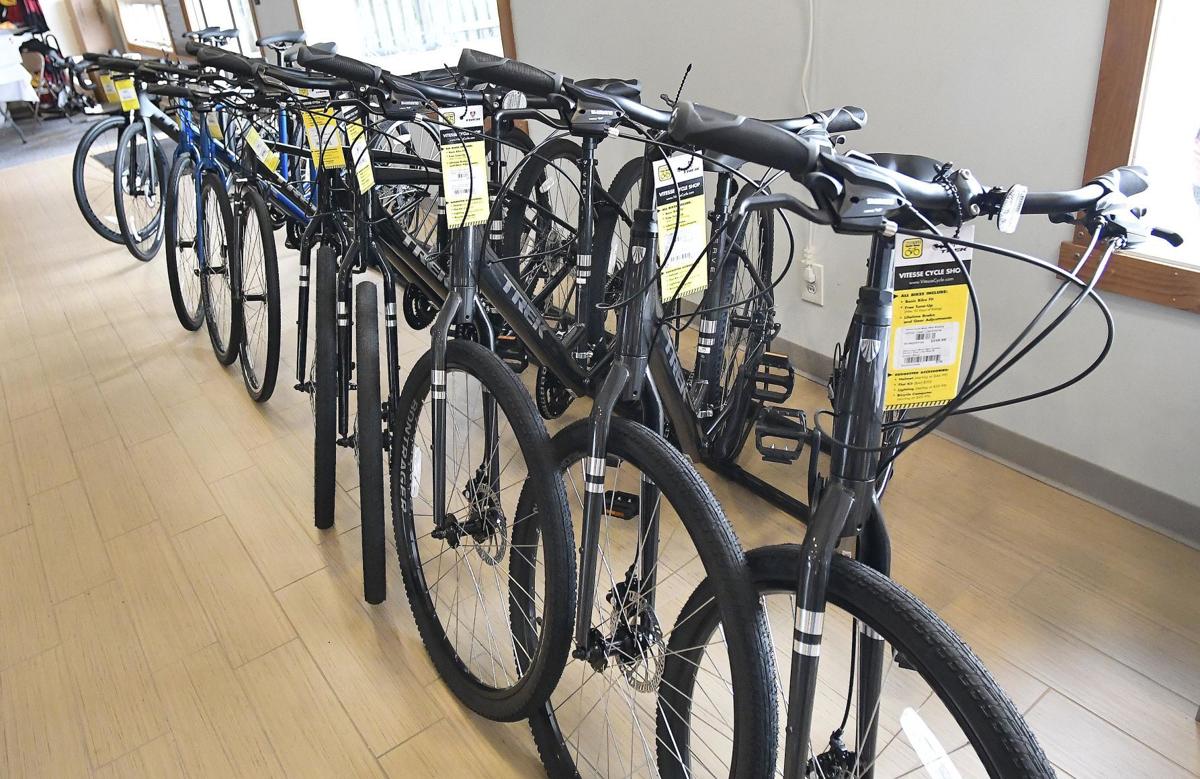 Bicycles stand on display at Vitesse Cycle Shop, 206 S. Linden St., Normal, on Thursday. While you can still buy a bike at most shops in the area, variety is narrowing due to a shortage of critical system parts. 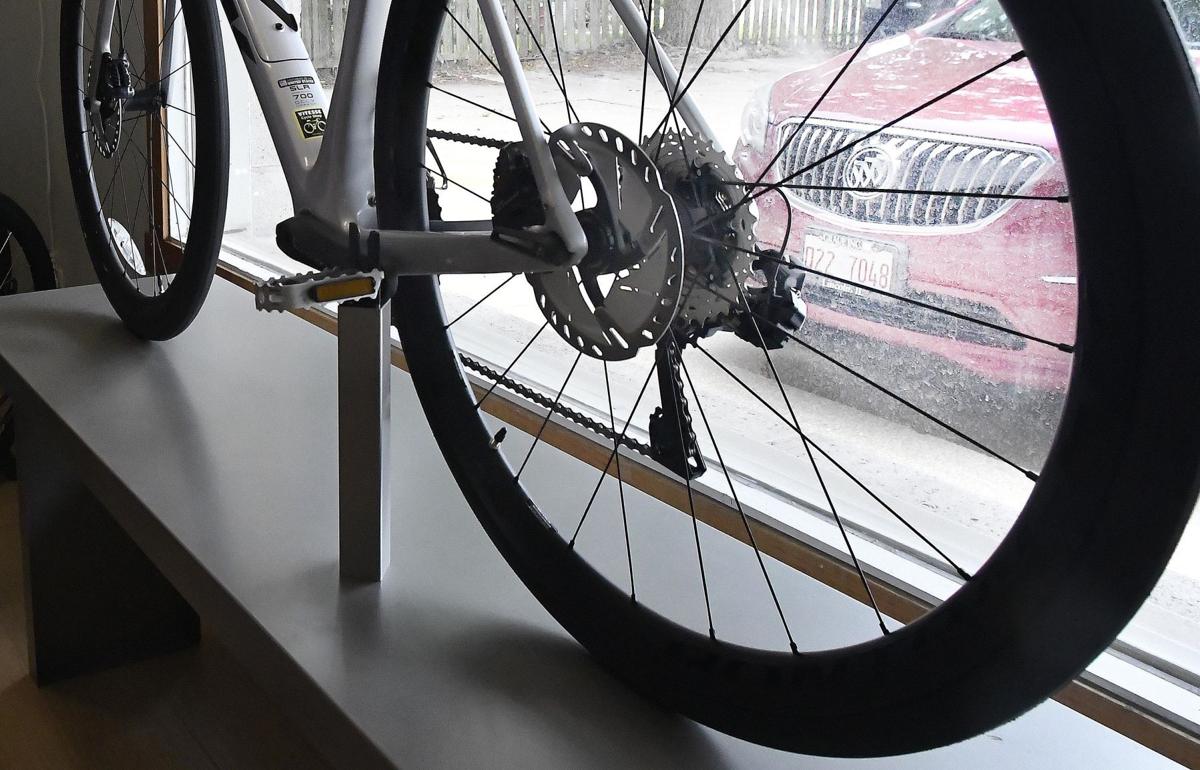 Precision gearing systems, as well as spokes and brakes, can lead to shortages in bicycles at shops like Vitesse Cycle Shop, 206 S. Linden St., Normal. 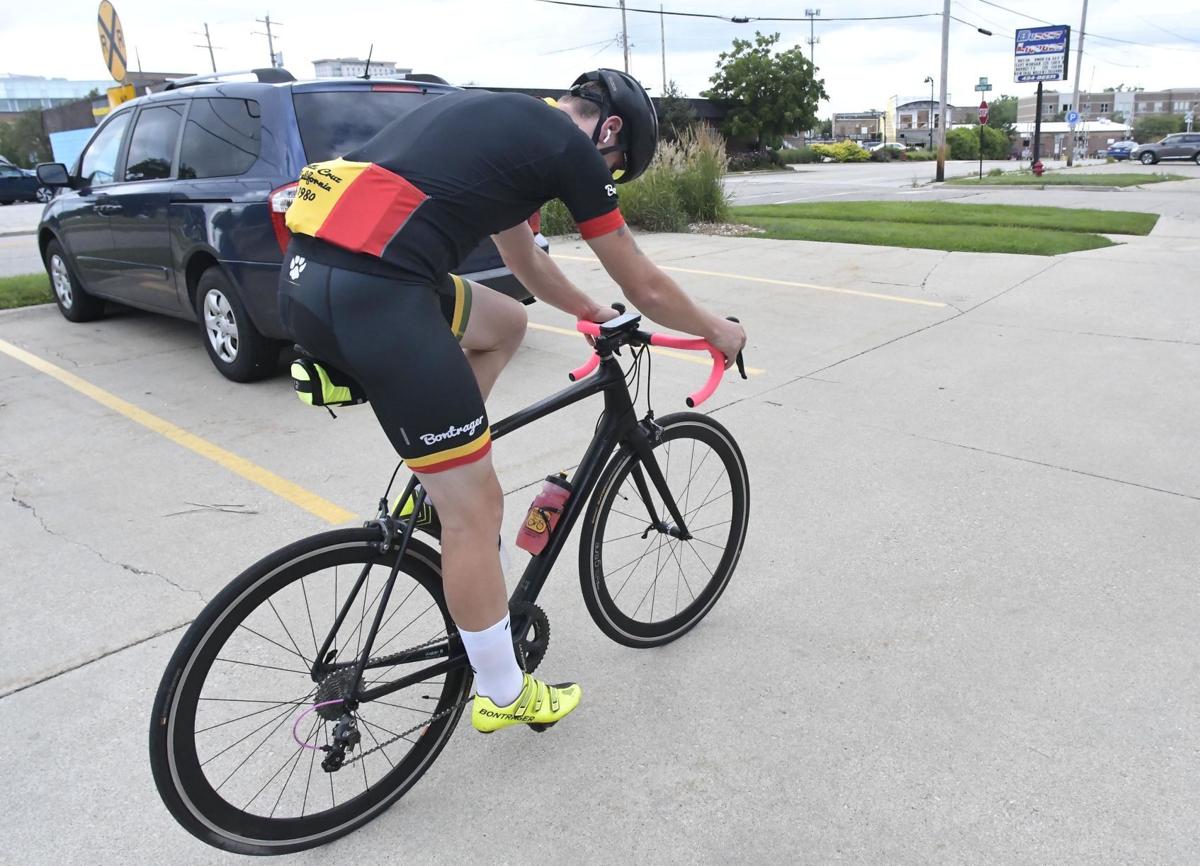 A bicyclist takes off for a ride at Vitesse Cycle Shop, 206 S. Linden St., Normal, on Thursday.