Choice to homeschool children not a matter of money, experts say
0 comments
Share this
{{featured_button_text}}
1 of 4 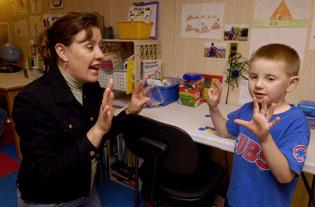 Lisa Lavender sings numbers song with son Caleb, 6, on May 13 at their home in Normal. Lavender homeschools her children, Caleb and Nathan. (The Pantagraph, Carlos T. Miranda) 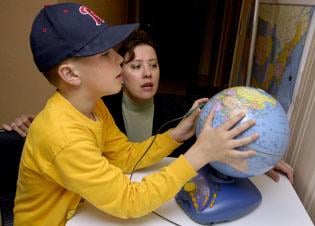 Nathan and his mother look for countries on a globe May 13 at their home in Normal. (The Pantagraph, Carlos T. Miranda) 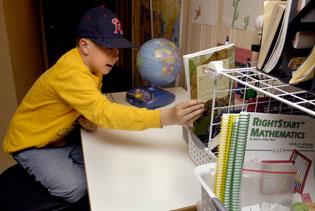 Nathan is seen at his desk May 13 in Normal. (The Pantagraph, Carlos T. Miranda) 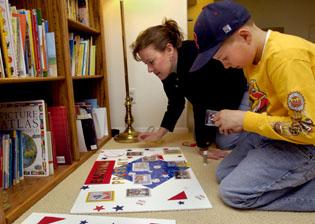 Nathan and his mother work on a project May 13 at their home in Normal. (The Pantagraph, Carlos T. Miranda)
Phyllis Coulter

BLOOMINGTON - Today's a school day, so the Lavender boys may jump on a trampoline today or visit a museum. They'll definitely read, and they know better than to skip homework: Their mom, Lisa, of Bloomington, is their teacher. | Hard times and homeschooling

Homeschooling, which the family started in November, costs less than private school tuition. Lavender wanted to spend more time with her boys, teaching her values and experiencing the joy of being the one who taught Caleb to read.

"I personally don't know anyone who home-schools - or not - based on the economy," said Shelly Nelson, coordinator of a homeschooling network in McLean County. "The economy plays little or no part in the decision to homeschool."

Across the country, experts say cost is seldom the deciding factor when homeschool and private school parents grapple with costs during a recession.

The Lavender boys had been at Calvary Baptist Academy, Normal, where tuition ranges from $2,850 to $4,025 depending on grade and family size. The family respects the school and has many friends there, but says homeschooling is the right choice for them.

Before the recession, the number of homeschooled students grew by about 8 percent annually nationwide; the latest federal figures, from 2007, calculate the total at about 1.5 million.

"There are a few home-school families considering returning their children to public school but the far larger trend is parents removing their children from private school in order to home school," said Ian Slatter, spokesman for the Virginia-based Home School Legal Defense Association.

The Lavender family is among them. "It was a little harder sell for me," said Jim Lavender, who was concerned about the boys' socialization.

But - with activities at the YMCA, 4-H, homeschool co-ops and other groups - Nathan and Caleb "socialize more now," he said. Nathan missed his school friends at first, his dad said, but now likes homeschool better.

The number of homeschoolers and their resources continue to grow, said Nelson, who coordinates Crossroads Area Home School Association and its Web site, which gives parents a place to exchange ideas.

At Bloomington District 87 and Normal-based Unit 5 schools, the number of homeschooled students moving in or out of the districts remains stable.

Christie Nugent of Urbana homeschooled her three children for three years starting in Mahomet and later in Urbana, and recently sent them back to public school for socialization.

The family participated in homeschool programs, including those at the Children's Discovery Museum in Normal, but never felt part of the home-schooling community. "Socially it was detrimental; academically, it was fine," she said. "All (three) adapted to school very well."

Nugent's children, ages 6 to 12, were at or above grade levels when they returned to classrooms. She believes in the public school system but said parents cannot expect schools to provide everything.

In contrast, Lavender said the Twin City homeschool groups have many resources. "If we didn't live in this community, I probably wouldn't homeschool," she said.

The Associated Press contributed to this report.

Police recovered a loaded pistol firearm behind one of the buildings, authorities said.

Erin Shane Riley, a spokeswoman for the Seattle-based company, said it is only the fourth Starbucks Reserve restaurant in the world, joining other locations in Seattle, New York City, and Shanghai.

“I didn’t like the tone of tonight’s meeting, and that concerns me,” Councilwoman Kathleen Lorenz said. "We can't continue in this discourse."

The family of a Flossmoor man who got both COVID-19 vaccine doses but later contracted the virus and subsequently died hope to bring awareness of the vaccine's antibody building abilities in some people with preexisting health conditions.

Officers responded to the 600 block of North Clinton Street at about 2:45 p.m. for a report of shots fired in the area.

The caveat: the state's full reopening will be contingent on keeping the virus at bay

A 1928 Ford Tri-Motor airplane will offer rides from April 29 to May 2 at Central Illinois Regional Airport.

A decade since he took his first oath of office as a Bloomington City Council alderman, Mboka Mwilambwe on Saturday took another oath.

Signs were placed April 30 at the intersection of Towanda Barnes Road and General Electric Road to designate the area as "Scott Bundy Memorial Road."

Lisa Lavender sings numbers song with son Caleb, 6, on May 13 at their home in Normal. Lavender homeschools her children, Caleb and Nathan. (The Pantagraph, Carlos T. Miranda)

Nathan and his mother look for countries on a globe May 13 at their home in Normal. (The Pantagraph, Carlos T. Miranda)

Nathan is seen at his desk May 13 in Normal. (The Pantagraph, Carlos T. Miranda)

Nathan and his mother work on a project May 13 at their home in Normal. (The Pantagraph, Carlos T. Miranda)
© Copyright 2021 The Pantagraph, 205 N. Main St. Bloomington, IL | Terms of Use | Privacy Policy
Powered by BLOX Content Management System from TownNews.com.
You don't have any notifications.