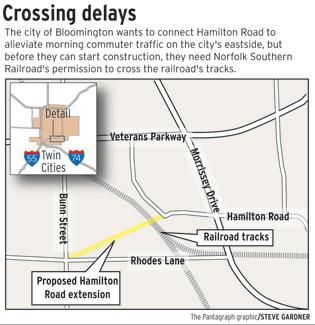 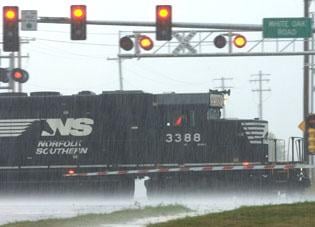 Upgrades to the crossing at White Oak Road and Martin Luther King Jr. Drive also faced with delays because of the proximity to a railroad crossing. (The Pantagraph/STEVE SMEDLEY)
{{featured_button_text}}
M.K. Guetersloh

Connecting the road between Bunn Street and Commerce Parkway will solve morning congestion at the Rhodes and Morrissey intersection and also create a route that would better feed east-west traffic through the city, Grovesteen said.

But it's not as easy as putting down the asphalt. It is a project that faces delays because railroad track crossings have to be negotiated with Norfolk Southern.

Hamilton Road has been on the city's project list since 1992. There have been starts and stops along the way, but the city began focusing on the Hamilton Road connection in 2003.

Soon, the City Council will be presented with a proposal to hire a specialist from the Farnsworth Group engineering firm to help fight for the crossing before the Illinois Commerce Commission.

In years past, the railroads have been fairly cooperative about the construction of at-grade crossings, said City Manager Tom Hamilton. "Now it seems like there is a policy shift to fight every crossing tooth and toenail," Hamilton said.

And there is, said Norfolk Southern spokesman Rudy Husband. "We are under a mandate by the Federal Railroad Administration to reduce the number of crossings," Husband said.

Creating a crossing would be counter-productive to following that mandate, Husband added.

Upgrades to the crossing at White Oak Road and Martin Luther King Jr. Drive also faced with delays because of the proximity to a railroad crossing. The ICC was brought into that project partly because of the new design for intersections near crossings, but also to get the railroad to cooperate, Grovesteen said.

Although the Town of Normal has not any recent projects where it had to work with railroads, Normal Director of Public Works Mike Hall said it expects road projects involving the railroads will take longer.

"New at-grade crossings will take longer than improvements to existing crossings to permit and will involve the (ICC)," Hall said. "That process is longer."

Recently, contractors faced a two-month delay while waiting for the railroad to approve the contractor's liability insurance during the resurfacing of the Bentown-Holder blacktop, Schmitt said.

Hamilton said fighting the railroads before the ICC adds cost to the project, but Husband said it should be an expected cost.

"They need to go to the ICC anyway," Husband said. "The ICC has to approve any railroad crossings."

Grovesteen estimated the cost of building the Hamilton Road extension is $2 million to $3 million. Costs such as buying land and right-of-way access from current land owners are still undetermined.

"We can't go forward with that until we know we can cross the railroad tracks," Grovesteen said.

The cost to pay the railroad for the right to cross the tracks has not been determined.

"They are going to want a fee for crossing their tracks," Hamilton said. "Crossings are not cheap. It will add hundreds of thousands of dollars to the project. This one could add $600,000 to project - maybe more."

Instead of building an at-grade crossing, Husband said growing cities such as Bloomington need to look at factoring in the cost of an over- or underpass into the construction of roads.

The construction of those types of structures could increase the project's cost by five or 10 times, Grovesteen said. And access to some businesses would be blocked by the approaches for the overpass or underpass, he added.

Christina Raines said she is sharing her “truth” for the first time after standing by Peterson while he was under suspicion in the 2007 disappearance of Stacy Peterson and the 2004 death of Kathleen Savio. Catch her interview at 9 p.m. tonight on Lifetime's “Cellmate Secrets."

The woman lost consciousness and hit her head on the arcade machine, prosecutors said.

A woman and her husband in their 90s were killed when their vehicle was struck by a semi-truck, police said.

Jonathon Campbell was held without bond and was ordered to have a domestic violence risk assessment.

A vehicle fire in the 2000 block of Main Street caused traffic to be rerouted Monday.

A FedEx driver delivering a package north of Kampsville in Calhoun County was mauled Friday by two large dogs who broke through a screen door. According to news sources, the driver was airlifted to a St. Louis hospital where his left hand and wrist were amputated.

Upgrades to the crossing at White Oak Road and Martin Luther King Jr. Drive also faced with delays because of the proximity to a railroad crossing. (The Pantagraph/STEVE SMEDLEY)
© Copyright 2021 The Pantagraph, 205 N. Main St. Bloomington,IL | Terms of Use | Privacy Policy | Do Not Sell My Info
Powered by BLOX Content Management System from TownNews.com.
You don't have any notifications.