BLOOMINGTON — Eighteen-year-old Jermani Harvey knows first-hand about the dangers of the intersection of Veterans Parkway at Empire Street.

With 18 crashes there in 2019, the intersection tops the list of the intersection with the most crashes in Bloomington, a ranking it has held for the past five consecutive years. It's also where Harvey's boyfriend was hit by a car, dying of his injuries.

The intersection of Veterans Parkway and Fort Jesse Road in Normal had the highest number of accidents overall in the Twin Cities, with 23. In November, a man died there after he was struck by two cars.

During a Pantagraph analysis of the numbers, state and local authorities stopped short of labeling those and other intersections as dangerous, but Harvey thinks something needs to be done immediately to make Veterans at Empire safe.

"It impacted me a lot because he was like my first love and he was also my friend," said Harvey, wiping tears. "I really have some bad days, but as the days go by, it's getting a little bit better."

Veterans Parkway is under state jurisdiction, and the Illinois Department of Transportation is looking at redesigning the Veterans/Empire intersection, said department spokesman Paul Wappel.

"Resurfacing will improve the skid resistance of the pavement and curb ramps, pedestrian push buttons, and pavement markings will also be improved," said Wappel. "These projects should improve vehicle and pedestrian safety."

Nick Petersen is general manager of Pizza Ranch, 1211 Holiday Drive, where both Harvey and her boyfriend, Reginald Hubbert, worked. He worries about speeding cars on Veterans and says, "I actually don't drive on that road because of that. I take back roads."

Bloomington Public Works Director Kevin Kothe acknowledged the high crash rate, but pointed out it's a busy intersection. "Veterans and Empire may have a lot of crashes, but there are a lot of people who drive through that intersection," Kothe said. "People just need to pay particular attention when they are driving. Crashes happen at a lot of different areas.

"It's not just at the busy intersections."

In Bloomington for at least 10 years, Veterans at Empire, Morrissey Drive at Veterans, Veterans at Oakland Avenue and Hershey Road at Empire Street have been among intersections with the highest number of crashes. They are among the areas under state jurisdiction.

Normal is working with IDOT to improve Main Street and Kingsley and Center streets from Division to Gregory Street, Normal Town Engineer Ryan Otto said. The improvements are a part of a larger project that could extend to Wood Street in Bloomington, tentatively starting in 2025. 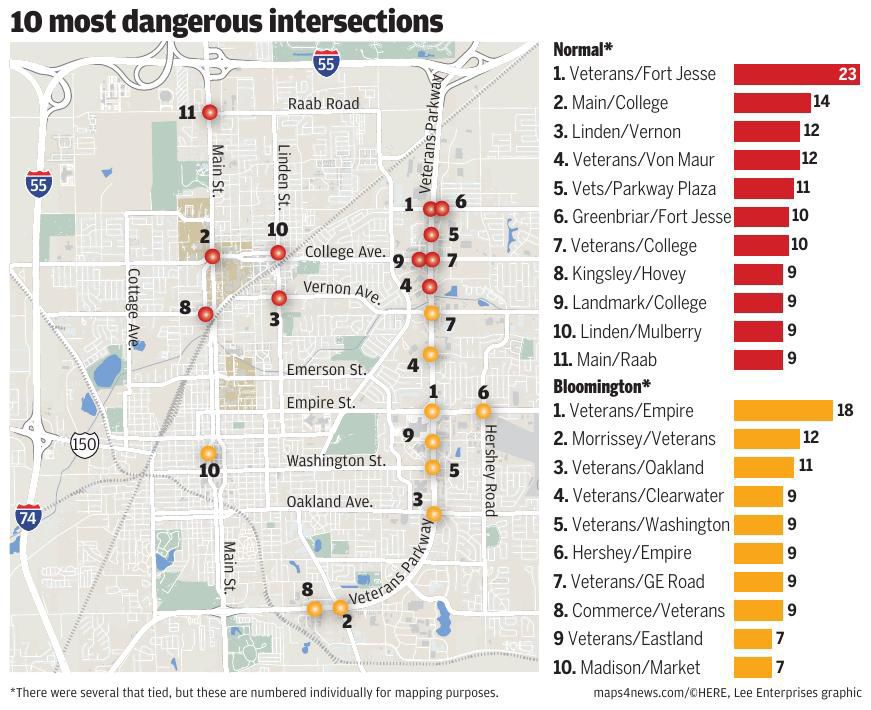 Bloomington recently configured Empire North Frontage Road at Fairway Drive, and removed corner parking and added larger stop signs at the intersection of Grove and Gridley streets, Kothe said. The city also is working on the intersection of Washington Street at Euclid Avenue / Brown Street, where an oddly shaped intersection has contributed to accidents there for many years.

"We don't have it in next year's budget, but we are working with a consultant right now to come up with a design that would realign Euclid and Brown so it's a single intersection instead of two offset intersections," said Kothe.

Normal staff are evaluating several intersections, including two Constitution Trail crossings on Vernon Avenue, using its Bicycle and Pedestrian Master Plan. The Linden and Vernon corridor was ranked third for the highest number of wrecks in 2019.

The town installed LED flashing stop signs at several intersections, including Grandview and Vernon and Adelaide and College, and implemented a fiber optic communication system to link traffic signals in uptown, said Otto.

On Sept. 26, 2019, Hubbert, 18, was walking with Harvey when he was struck by an SUV as the pair crossed Veterans at a service road just north of the Empire intersection. He died several days later.

"I was like a foot or two right behind Reggie," said Harvey. "I honestly don't know how I didn't get hit with him. That's how close (the vehicle) was to me."

Harvey said there were no cars when they started to cross the four-lane parkway near a service road traffic signal; the main intersection doesn't have a pedestrian crosswalk. "... It was just dark. So we were crossing the street ... and I didn't see anything until the vehicle hit him. After that I kind of went into shock."

The closest crosswalks for Veterans are a half-mile north of Pizza Ranch, at Clearwater Avenue, and south at Eastland Drive. Petersen, her boss, says the majority of 20 to 25 employees ride a bus to work.

"Some of them have to walk across Veterans. If they were to build a pedestrian bridge over Veterans, it would take away the headaches that are having with walking across Veterans," he said.

Harvey, who wears a button with Hubbert's photo and a locket with his ashes around her neck, struggles with his death. She wants something done to make the intersection safe "ASAP, because I don't want anybody else to go through what I am going through. If I can help someone by getting a crosswalk right there, then I would."

'I'd love to see something done'

The majority are Greenbriar and Fort Jesse Road, which in 2019 had the sixth highest number of crashes in Normal. Volk blames the intersection design and inattentive drivers.

“It’s a dangerous intersection,” he said, adding he avoids both intersections as much as possible. “I’d love to see something done, but I don’t know what it could be.”

Nearly two months after Hubbert died, 25-year-old Vincent V. Shorten was killed while crossing Veterans at Fort Jesse Road. It's the worst intersection in the Twin Cities, based on number of accidents.

O'Reilly assistant manager Ben Smith remembers the accident, and said the intersection is "just not a safe place."

Normal Police Chief Rick Bleichner said Shorten was initially struck by a minivan, and the impact caused him to fall into another lane where he was struck by a second driver. Witnesses told police Shorten had been standing in the median before walking into the crosswalk "when he did not have the right of way."

Neither driver was cited.

But there are fewer patrols now, Volk said, and many drivers speed through 45 mph zone. And after stores close for the night, the Veterans/Fort Jesse intersection is almost completely dark.

“Now, it’s just a speedway, as fast as you can drive,” he said. “I’m a firm believer that they should be pulling people over left and right.”

Counting down the 10 most Bloomington-Normal intersections

WH: We 'can't afford to wait' on gun safety

WH: We 'can't afford to wait' on gun safety

A semitrailer truck struck and killed a pedestrian crossing old Route 66 on Monday in front of the hospital in Lincoln, state police at Springfield said.

NORMAL — The Normal City Council approved a 2 percent increase in town water rates Monday night to pay for improvements to the water system.

The long-awaited repair of Clinton Boulevard from Empire Street to Division Street is among 10 portions of streets on the list to be resurfaced this summer.

With cars left parked at home for most of the last two months, Bloomington-Normal police have seen significantly fewer crashes compared to last year.

Flick Fact: Where is the 'most popular' area of B-N for a traffic accident?

Question: You’ve just had a traffic accident at the intersection in Bloomington-Normal with the most accidents. Where are you? (1) Veterans Pa…

A virtual meeting next week will allow Central Illinois residents to provide input on options for the potential reconfiguration of the intersection of Veterans Parkway and Empire Street in Bloomington. 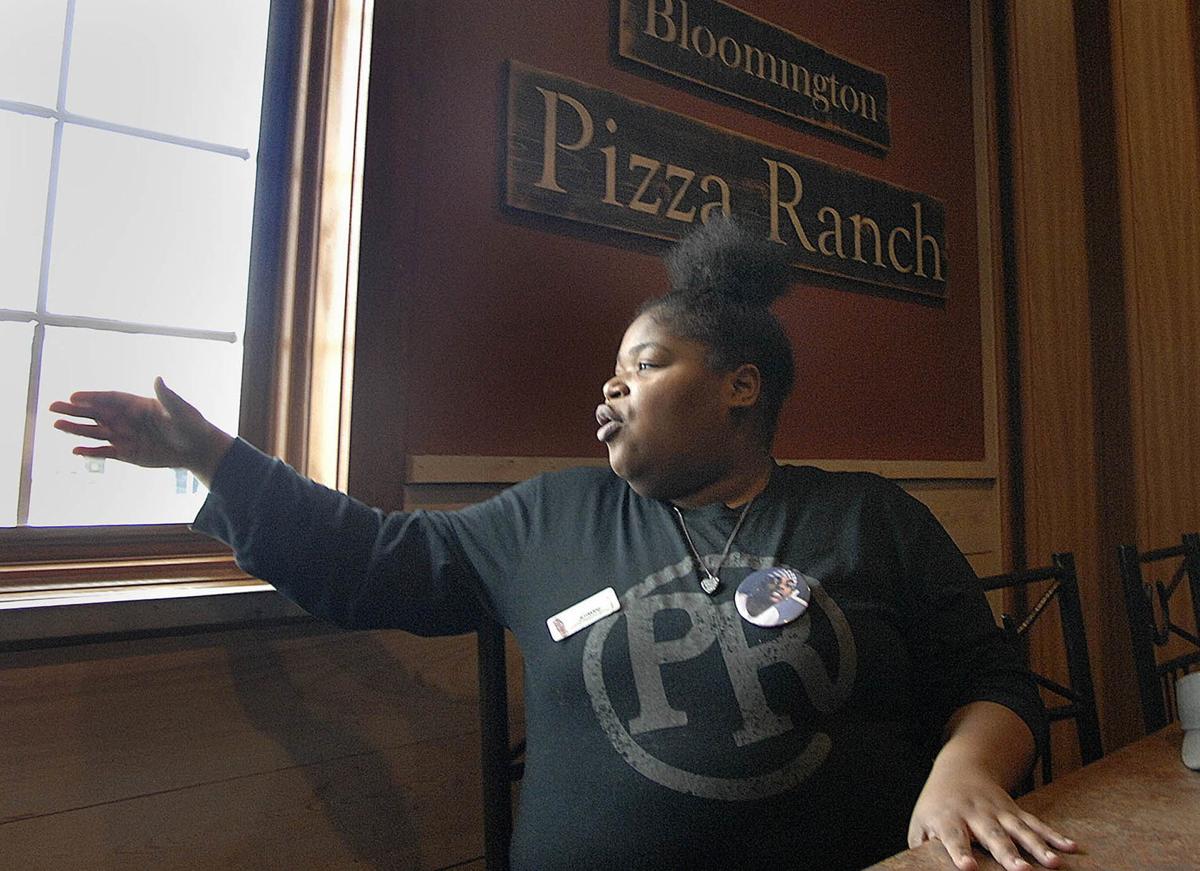 Pizza Ranch employee Jermani Harvey talks about witnessing the death of her boyfriend, Reginald L. Hubbert, 18, of Bloomington, who died after he was struck by a northbound automobile Sept. 26 as the pair were crossing Veterans Parkway at Empire Street. While on a break Thursday, Feb. 26, 2020, at her job, she pointed to the site of the accident. 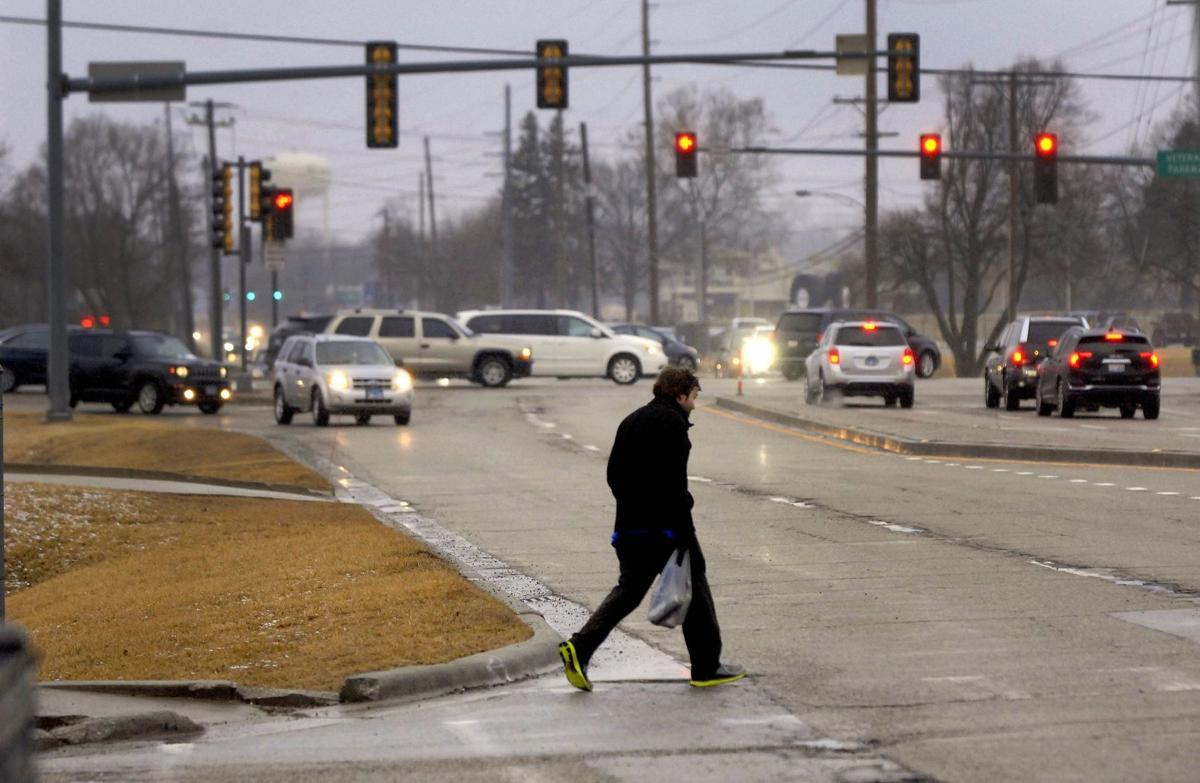 Normal's Fort Jesse Road at Veterans Parkway is the intersection with the most crashes in the Twin Cities with 23 accidents in 2019. 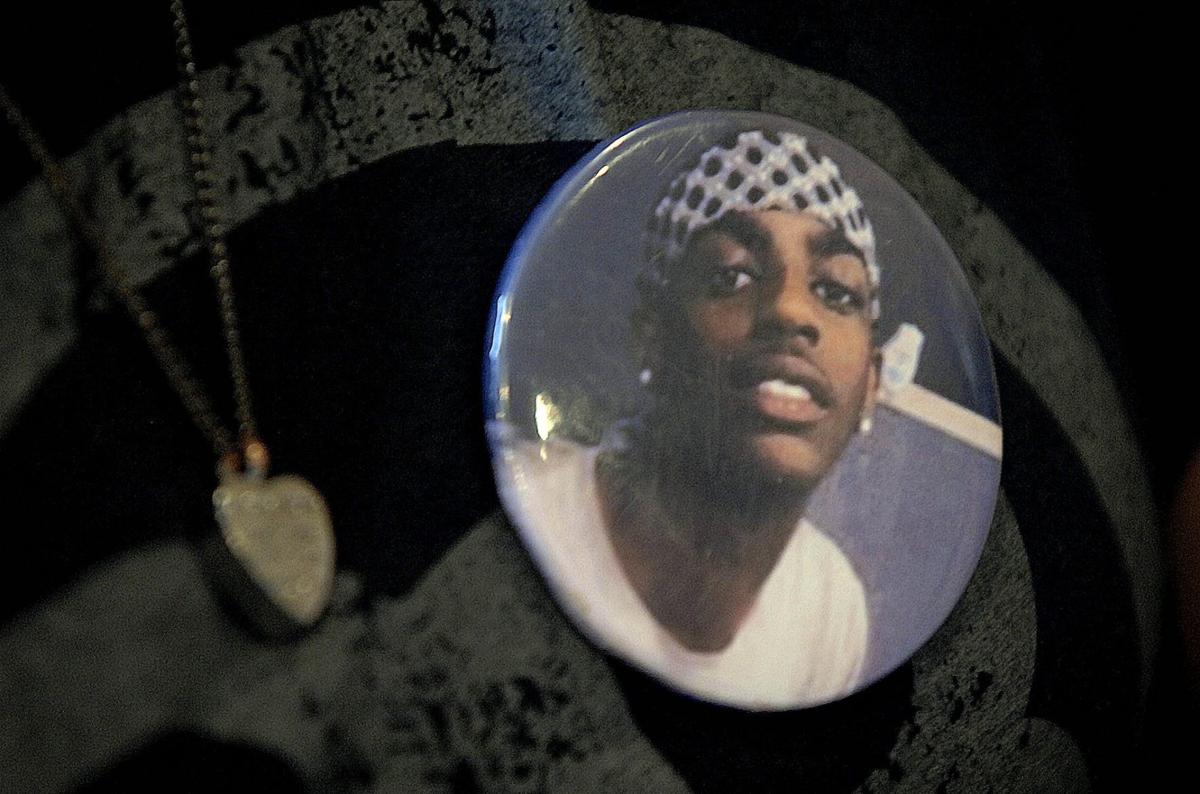 Jermani Harvey wears this button with the face of Reginald L. Hubbert, 18, of Bloomington, who died after he was struck by a northbound automobile last October as he was crossing Veterans Parkway at Empire Street.