10,000 masks, sanitizer, are available for McLean County businesses. Here are the details.
0 comments
Share this
Return to homepage × 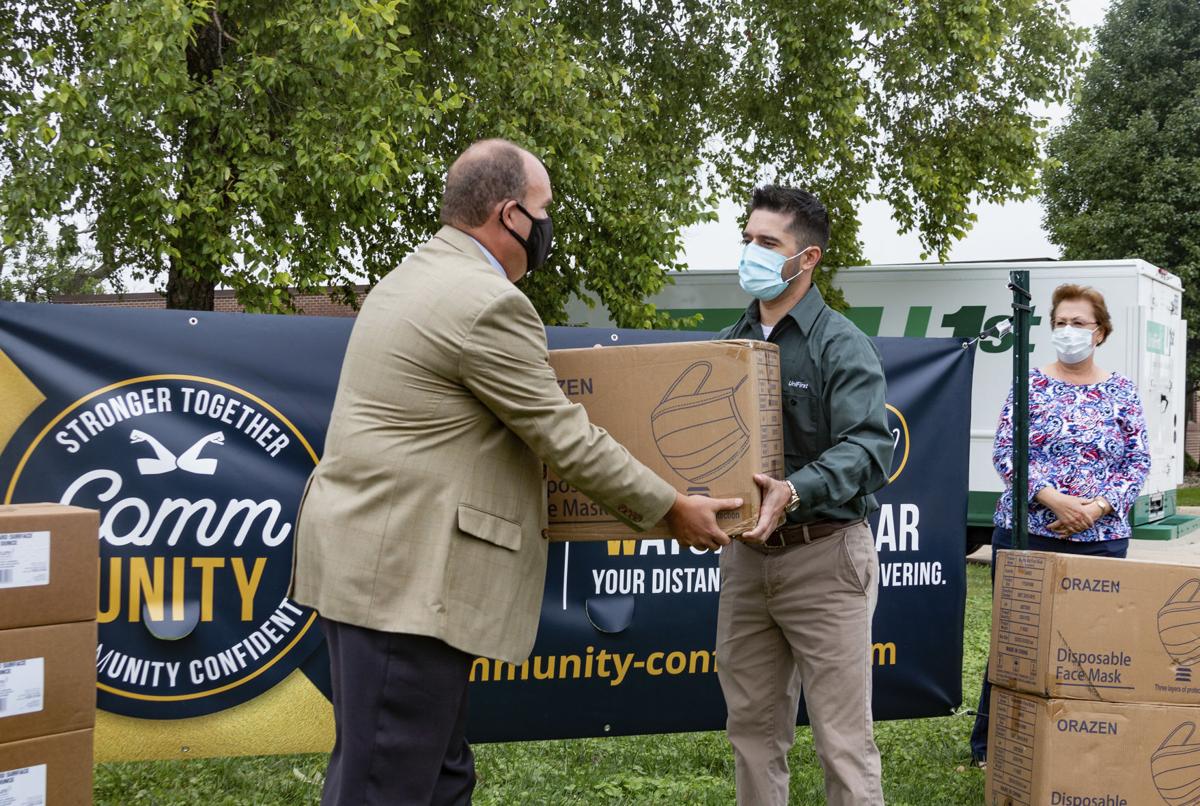 McLean County Chamber of Commerce President Charlie Moore, left, accepts a donation from a UniFirst Corporation employee on Thursday. UniFirst donated 10,000 masks and sanitizer to the chamber, which, in turn, will make the supplies available for McLean County businesses trying to remain open as COVID-19 cases increase in McLean County. 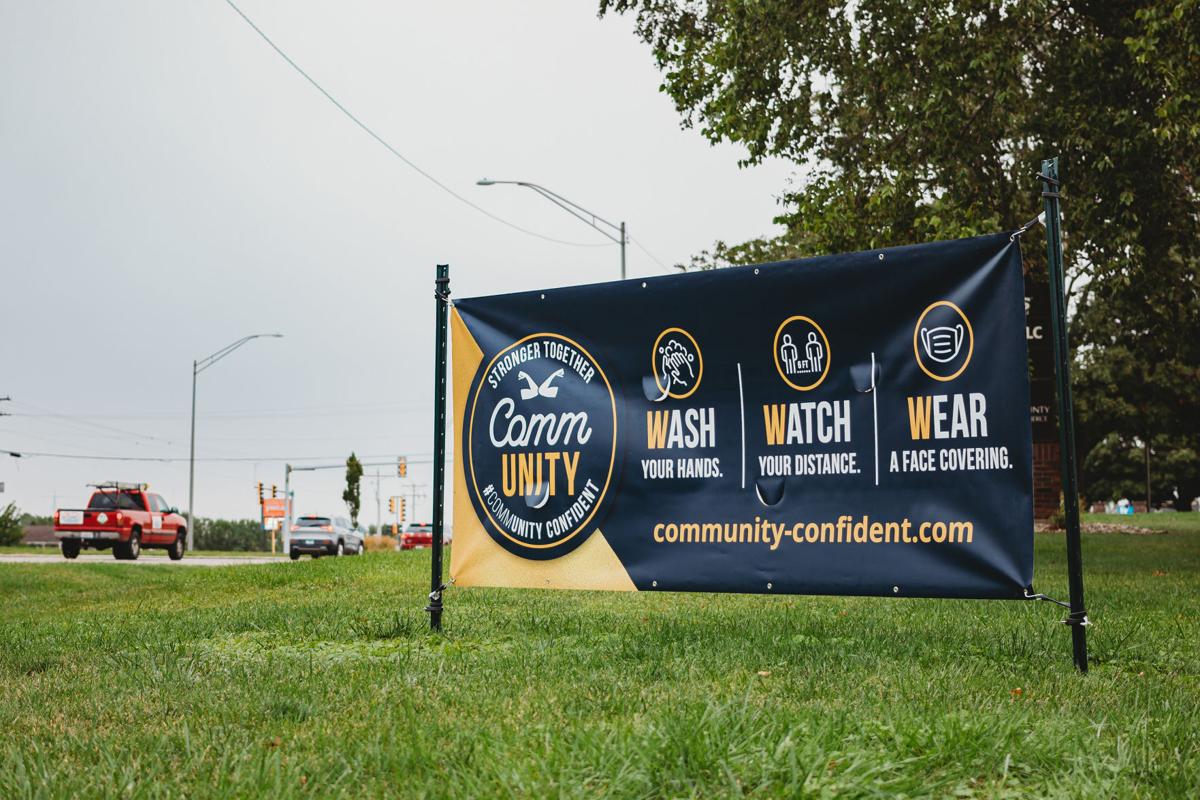 McLean County Chamber of Commerce displays its commUNITY Confident banner outside the chamber offices, 2203 E. Empire St., Bloomington, on Thursday. Twenty other banners will go up throughout Bloomington-Normal on Friday.

BLOOMINGTON — A donation of 10,000 masks and several cases of surface sanitizer will help McLean County businesses to remain open safely as the number of county COVID-19 cases increase, the president and CEO of the county chamber of commerce said Thursday.

"Finding safety products such as the masks have been difficult at best at times," Charlie Moore said. "UniFirst's donation of 10,000 masks as well as bottles of sanitizer is tremendous."

On Thursday, UniFirst Location Manager Lance Daugherity presented to Moore a donation of 10,000 masks as well as cases of cleaning sanitizer, Moore said. The donation is part of UniFirst's initiative to support businesses in UniFirst markets nationwide.

Moore said the masks and sanitizer will be available for McLean County businesses to pick up at the chamber office, 2203 E. Empire St., Bloomington, from 8:30 a.m. to 5 p.m. Monday through Friday. The product also will be available at outdoor chamber events during the next two weeks or until the supplies run out, he said.

UniFirst's investment will help to keep the community safe and dovetails with commUNITY Confident, the local campaign to support businesses and reassure consumers, Moore said.

The campaign, launched in June, encourages businesses to pledge that they will follow guidelines that promote consumer and employee health, including social distancing, hand washing, staying home when sick, sanitizing surfaces, limiting customers and encourage mask wearing. Businesses that agree to take the pledge at www.community-confident.com are listed on the website, which also has resources to help businesses.

"At a time that we're seeing our COVID-19 cases rise significantly, it's important to us as a chamber of commerce that we do all we can to keep our businesses open with health and safety top of mind and also to help keep our ISU (Illinois State University) and IWU (Illinois Wesleyan Universtiy) students here," Moore said.

Check it out: 20 Bloomington-Normal restaurants we wish would come back

Gil’s Country Inn, a longtime, family-owned restaurant in Minier, closed in 2013 after the economy took its toll. The restaurant was particularly known for its fried chicken.

Lancaster's Fine Dining, 513 N. Main St., a downtown Bloomington mainstay for nearly 16 years, closed its doors in August 2014. A struggling economy and the upscale restaurant's location in a neighborhood of bars were factors.

Bennigan's, which billed itself as an "Irish American Grill & Tavern" closed its Normal location in July 2008 after the chain filed for bankruptcy. The eatery, 115 S. Veterans Parkway, was replaced by Wild Berries, which was later closed and razed. Owner Tartan Realty Group of Chicago now plans to build a four-unit development at the site.

Lox, Stock & Bagel closed in May 2004 after 22 years at Normal's College Hills Mall, in tandem with the mall's conversion to the Shoppes at College Hills.

Zorbas, popular for serving Greek food, gyros and breakfast, closed in 2015 after its location at 603 Dale St., Normal, was sold to a developer. The eatery first opened in 1983 around the corner at 707 S. Main St.

The historic Grand Hotel, 1201 E. Emerson St., Bloomington, once served as a winter training quarters for a number of circus acts and was converted into a restaurant in 1937. The property was foreclosed upon by Pontiac National Bank in 2001, sold in 2002 and demolished a few months later.

The Mr. Quick restaurant at Clinton and Washington streets had its grand opening in January 1966, with burgers starting at 15 cents and coffee for a dime a cup. The restaurant closed in 2001 and the city of Bloomington later bought the site and razed the building so it could widen the intersection.

Chicago Style Pizzeria, 1500 E. Empire St., Bloomington, closed in 2015 after 22 years in business when owners Abe and Ruth Taha (Abe is pictured above) decided to retire.

Shannon's Federal Cafe, 105 W. Front St., opened in 1997 after its owners took over the historic Federal Cafe in downtown Bloomington, which closed two years earlier. Shannon's closed in 2004 because the owners also ran Shannon's Five Star Restaurant, and the demands of both businesses were too much.

Damon's - The Place for Ribs opened in 1995 at 1701 Fort Jesse Road, Normal. The eatery closed in 2006 after business had declined; the site is now a CVS pharmacy.

Australian-themed Ned Kelly's Steakhouse opened in May 1992 in what was the former location of Bob Knapp's in the Brandtville Center (now known as Morrissey Crossing).  It closed in August 2007 after the company's four Central Illinois locations were unable to compete with bigger chains.

Arnie's was a popular Twin City eatery for 25 years. Located at the Bloomington airport terminal, it closed in 2003, shortly after the Central Illinois Regional Airport moved to its current location about a mile east. A subsequent restaurant, Arnie's Etc., was open for about a year in the former terminal building, until it closed in 2005.

Diamond Dave's, a mainstay at the former College Hills Mall for 21 years, closed its doors in June 2004 in tandem with the gutting of the mall to create what is now the Shoppes at College Hills.

Jerry's Grille opened in 1999 in Bloomington's Brandtville shopping center, taking over the spot used by another eatery, Henry Wellington. It closed it 2005 and then became Goodfellas, which also closed.

After 33 years in the heart of Normal, Golden West closed in 2002, after the owners received a surprise offer for the site and decided it was time to sell.  The building, 712 S, Kingsley St., was later resold to Tartan Realty and demolished in 2003.

After eight years at 407 N. Hershey Road, Bloomington, Ming's closed in 2012. The eatery was facing foreclosure at the time.

The former Central Station restaurant in downtown Bloomington, once a firehouse in days gone by, is now home to Epiphany Farms Restaurant and Anju Above.

Chevys Fresh Mex, 704 S. Eldorado Road, Bloomington, closed in 2011 after being open nearly nine years. The site has also been home to several other restaurants, including a House of Hunan, Shakey's Pizza and Butterfields.

The Caboose, a historic Bloomington eatery at 608 W. Seminary St., closed without fanfare in February 2012.  The restaurant, with several owners and names including Chuck's Caboose and Barney's Caboose, had been a west-side fixture for more than 60 years.

Delgado's, a popular Mexican restaurant at 201 Landmark Drive, Normal, closed in May 2005 after after 24 years in business. It is now the location of Los Potrillos.

Gregg Chadwick, chair of Heartland college board and COO of Marcfirst, dies at 57

The chair of the Heartland Community College Board of Trustees and chief operating officer of Marcfirst was remember Thursday as a man dedicated to community service.

Rebuilding consumer confidence to encourage people to shop — and be safe — as restrictions are eased amid the COVID-19 pandemic is the goal behind the “CommUNITY Confident” campaign being launched Thursday.

Illinois health officials say despite the 1,953 new confirmed cases of COVID-19 and 28 fatalities reported Thursday, the percentage of positive coronavirus tests is trending down, but hospitalizations are rising.

The township recently received funding through the Illinois Solar For All program to add a solar array at the Activity and Recreation Center.

Another 77 new cases of COVID-19 were confirmed by the McLean County Health Department Saturday, bringing the county to 2,879 cases since March.

McLean County Chamber of Commerce President Charlie Moore, left, accepts a donation from a UniFirst Corporation employee on Thursday. UniFirst donated 10,000 masks and sanitizer to the chamber, which, in turn, will make the supplies available for McLean County businesses trying to remain open as COVID-19 cases increase in McLean County.

McLean County Chamber of Commerce displays its commUNITY Confident banner outside the chamber offices, 2203 E. Empire St., Bloomington, on Thursday. Twenty other banners will go up throughout Bloomington-Normal on Friday. 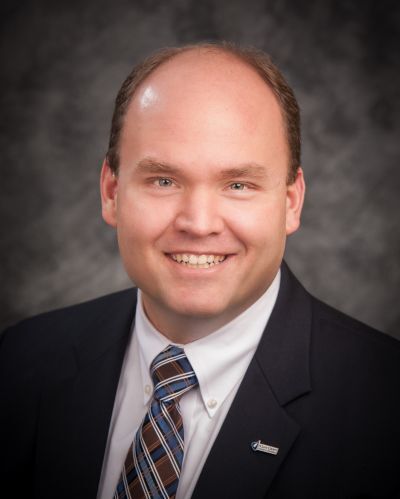