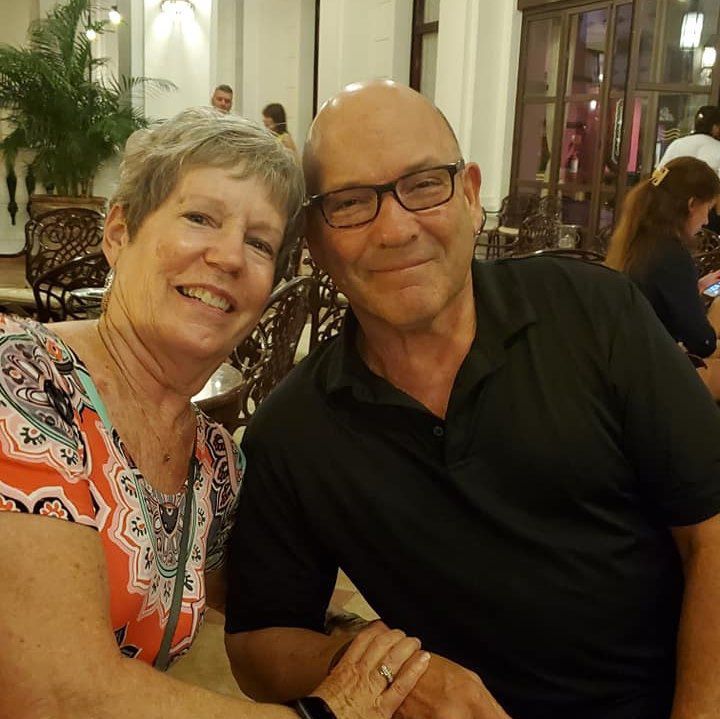 Barbara and Jordan May, a couple from Bloomington, were on board the Grand Princess cruise ship that saw 21 people test positive for the coronavirus. 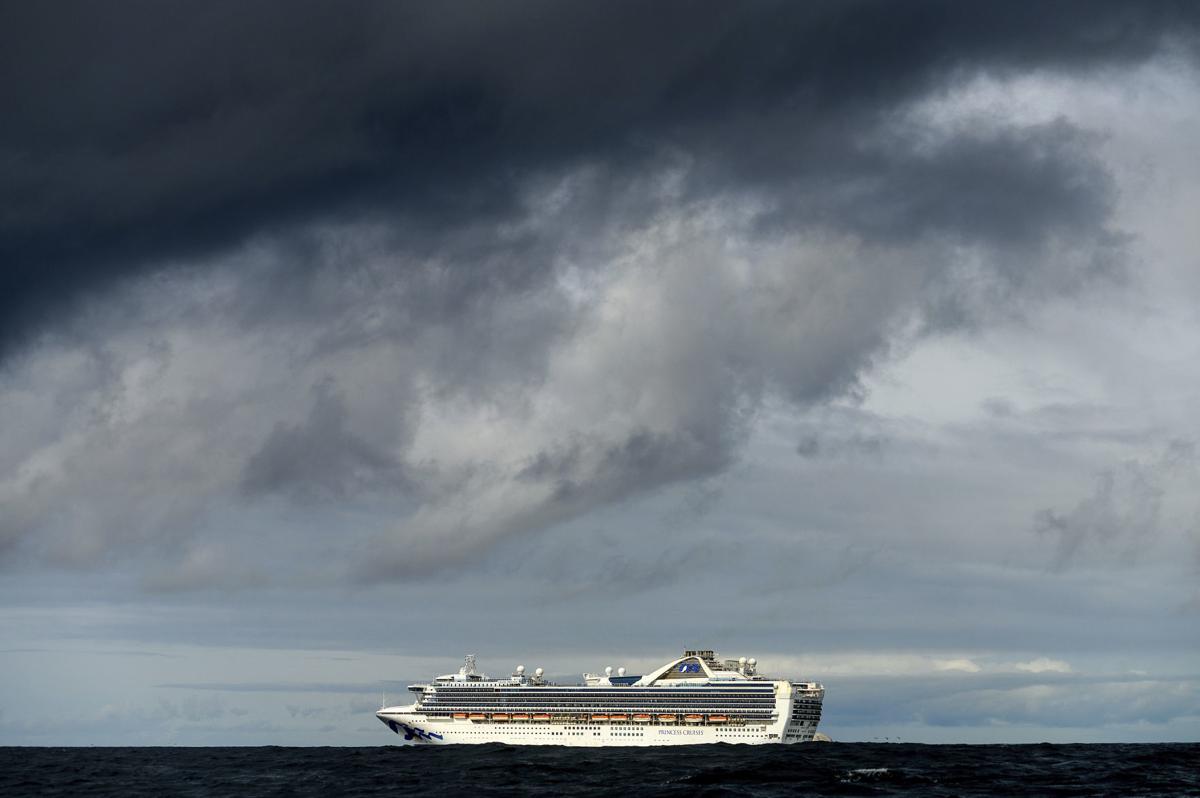 Carrying multiple people who have tested positive for COVID-19, the Grand Princess maintains a holding pattern about 30 miles off the coast of San Francisco Sunday. The cruise ship is scheduled to dock at the Port of Oakland on Monday. 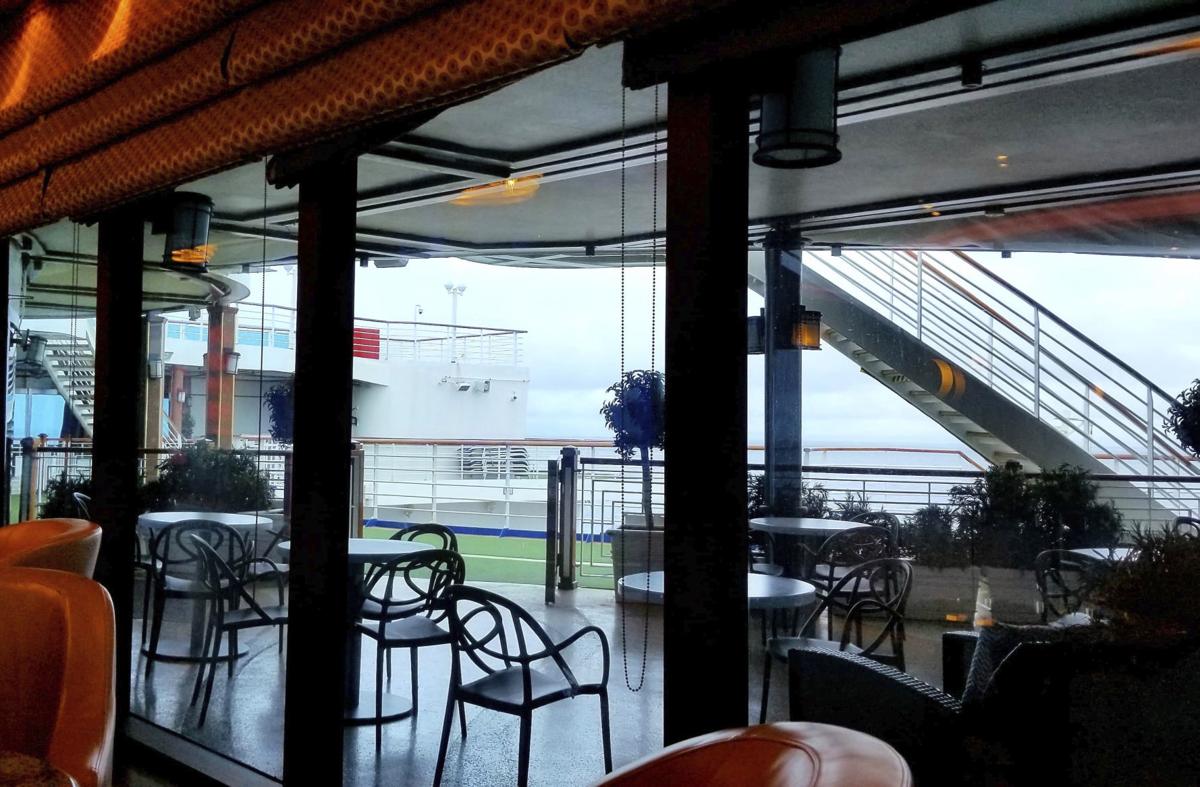 This photo provided by Michele Smith shows a deserted lounge area on the Grand Princess cruise ship Friday off the California coast. 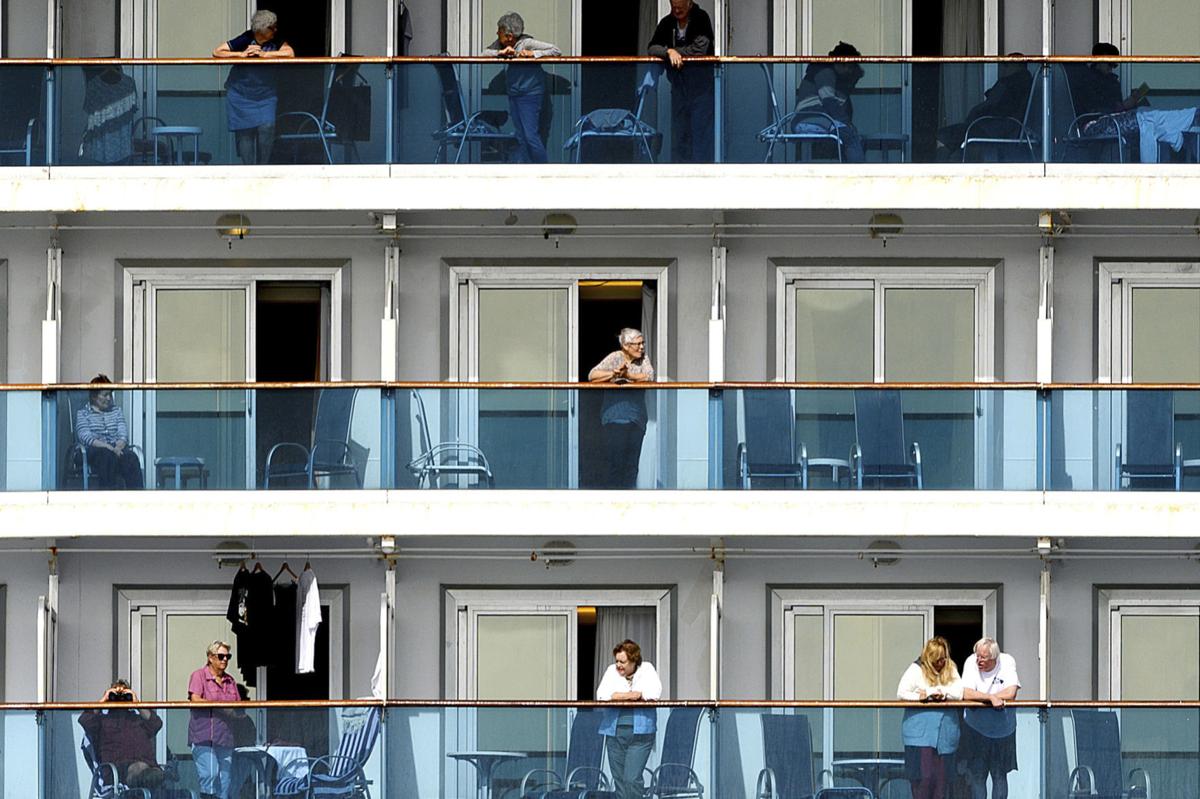 Passengers look out from their stateroom balconies aboard the Grand Princess as it cruises a holding pattern about 25 miles off the coast of San Francisco on Sunday. The ship is expected to dock in Oakland in the east San Francisco Bay on Monday.

SAN FRANCISCO — A Bloomington couple hopes to return to Illinois this month, after their vacation on a cruise ship was extended after 21 people on board tested positive for COVID-19, also known as the coronavirus.

Barbara May and her husband, Jordan, are among the 3,553 people aboard the Grand Princess for what was originally scheduled for a two-week journey from San Francisco to Hawaii. However, the trip was interrupted on its return leg Wednesday when officials learned that a 71-year-old California man who had traveled on the ship last month died of the disease last week.

“We woke Thursday to a letter informing us,” Barbara said. “That’s when everything started to change. We noticed they had removed the salt and pepper shakers from the tables. We couldn’t touch anything. The staff members were wearing masks and gloves and delivered and prepared everything.”

The chief medical officer of the ship, Dr. Grant Tarling, issued a “health advisory letter” to guests and crew aboard the ship. Later that day, officials issued an update which changed the course of the trip.

Following guidelines from the U.S. Centers of Disease Control, all guests were asked to stay in their staterooms while test results on 45 crew members and guests are pending, officials announced. Guests are receiving meal deliveries in their staterooms by room service, and additional television and movie options have been added to in-room programming. Guests from 54 different countries have also been provided complimentary internet service to stay in contact with their family and loved ones.

Crew members wearing masks and gloves delivered trays of food in covered plates, and placed outside the stateroom doors.

More than 400 people have tested positive for the disease in the United States and as of Sunday, 19 deaths have been associated with the coronavirus. Of the 21 people who tested positive on the cruise ship, 19 were crew members.

President Donald Trump was made aware of the situation.

May said she and her husband are making the best of it.

“The captain (John Smith) comes on about every three hours with an update, even if there is nothing really new,” she said. “They are trying to do everything they can to make it as comfortable as possible.”

Fortunately, for the Mays, they have access to a balcony and are able to experience the outdoors on a limited basis and converse with others who also have staterooms with balconies.

The ship set anchor about 20 miles off the coast of San Francisco. Barbara reported seeing a helicopter take someone off of the ship which Grand Princess officials confirmed was a critically ill U.S. guest and their travel companion who were transported to a shoreside medical facility for treatment unrelated to coronavirus.

“We enjoyed Saturday because we were able to see the Golden Gate Bridge from a distance,” she said. “The highlight was watching this boat ‘Miss Tammie,’ delivering pallets of supplies and water. We also got to watch a seal that came out to entertain us.”

The couple is unsure of when they will be able to return home, but officials informed the passengers they would be heading for Oakland to disembark on Monday, through an evacuation process specified by federal authorities.

“That may take a couple of days,” she said. “They are grouping people and acute care passengers will be in the first group to leave.”

Group two will be non-acute California residents and the third group, which includes the Mays, will be U.S. residents from other than California. The final group will be other nationalities.

Barbara May said Sunday night that their group will be taken to Texas or Georgia. "We will be tested when we get to our destination and probably quarantined for 14 more days," she said.

A woman from St. Louis has also been reported to have tested positive for the coronavirus. She traveled by train to St. Louis, including through portions of Central Illinois, including the Uptown Normal Amtrak location.

COLLECTION: Pantagraph coverage on the coronavirus

BLOOMINGTON — Spring break is next week for Illinois State and Illinois Wesleyan universities and Heartland Community College, and officials a…

An Amtrak train that passed through Central Illinois and made a stop at the Bloomington-Normal Uptown Station was carrying a passenger that may test positive for the coronavirus. The woman was on the train to St. Louis.

The woman was on a Chicago-St. Louis train, which includes stops in Central Illinois. Here's what we know so far about this developing story ...

The latest on how Normal, Bloomington are preparing for coronavirus

In the event of a pandemic, Bloomington-Normal city officials are prepared to respond.

No confirmed COVID-19 cases in McLean County but caution urged

While there are no confirmed cases in Central Illinois of COVID-19, health professionals are prepared if the new strain of coronavirus spreads to Central Illinois and urge residents to reduce their risk.

Organizers of events in the Bloomington-Normal area are keeping a close eye on the evolving coronavirus situation and continuing cleaning practices but no cancellations have been announced.

A Bloomington couple will call Dobbins Air Force Base in Marietta, Ga., home for the next two weeks, under quarantine, after leaving a ship where at least 21 people tested positive for the coronavirus last week.

The countdown is on. After spending more than two weeks on board a cruise ship found to be infected with the coronavirus and more than a week-and-a-half at an air reserve base in Georgia, Barb and Jordan May are planning to finally return home Thursday.

Barbara and Jordan May, a couple from Bloomington, were on board the Grand Princess cruise ship that saw 21 people test positive for the coronavirus.

This photo provided by Michele Smith shows an empty dining center on the Grand Princess cruise ship Friday off the California coast. Scrambling to keep the coronavirus at bay, officials ordered a cruise ship with about 3,500 people aboard to stay back from the California coast until passengers and crew can be tested, after a traveler from its previous voyage died of the disease.

Carrying multiple people who have tested positive for COVID-19, the Grand Princess maintains a holding pattern about 30 miles off the coast of San Francisco Sunday. The cruise ship is scheduled to dock at the Port of Oakland on Monday.

This photo provided by Michele Smith shows a deserted lounge area on the Grand Princess cruise ship Friday off the California coast.

Passengers look out from their stateroom balconies aboard the Grand Princess as it cruises a holding pattern about 25 miles off the coast of San Francisco on Sunday. The ship is expected to dock in Oakland in the east San Francisco Bay on Monday.