A memorial service will be at 4 p.m. Friday at Calvert-Belangee-Bruce Funeral Home, LeRoy, with Pastor Bobby Davis officiating. Visitation will be from 3 to 4 p.m. Friday at the funeral home.

Memorial contributions may be made to Arrowsmith Christian Church or Ellsworth United Methodist Church.

He was born Nov. 23, 1927, in Highland, to Elbert and Ruth Roberts Hastings. He married Jacky June McConkey on May 20, 1947, in Arrowsmith. She survives in Bloomington.

He was preceded in death by his parents and one grandson, Kyle Hastings.

Lyle was a retired school superintendent from Big Hollow, Ingleside. He was a member of the Ellsworth United Methodist Church. 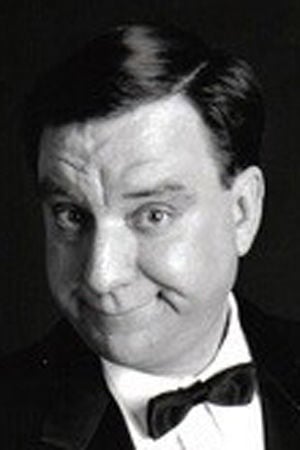 BLOOMINGTON — Kenneth Behrens, 71, of Bloomington, best known as the voice of Central Illinois as host of the Ken Behrens Show on WJBC AM 1230 radio for more than 32 years, passed away Sunday (Dec. 1, 2019) at home surrounded by his family.

Ken was born June 11, 1948, in Chicago Heights, the son of the late Norbert A. and Irene E. Behrens. The Peotone native was a devoted husband, father and grandfather.

Ken married Cynthia Hoefler on Dec. 23, 1979, after meeting on the Illinois State University campus. They have two daughters.

The popular, top-rated morning radio talk show host was a gifted comedian and entertainer. His stand-up comedy was enjoyed nationwide, from the Comedy Store in Los Angeles to the Sabre Room in Chicago. The comic stylings of Ken Behrens kept his family and friends entertained always. He was an accomplished piano player.

Ken appeared in several plays at Conklin's Barn Dinner Theatre in Goodfield and was the house emcee at Peoria's Madison Theater, appearing with Drew Carey. Ken also appeared at the Palmer House in Chicago.

He was proud of an original joke that was published in the Reader's Digest and later included by the publisher in a “Best Of” compilation.

Over the decades on his radio show, Ken interviewed countless celebrities, authors, actors, comedians and just some plain interesting people. He retired from the station in 2002. That same year, the Illinois House declared March 1 as Ken Behrens Day. “I have nothing but fond memories,” Behrens said in a 2015 interview of his WJBC days.

Ken joined the station after graduating from Illinois State University in 1970. His senior year, he was the program director at WGLT, the campus radio station. Following WJBC, Ken hosted a local CNN news show for two years, worked in marketing for People's Bank and with Connoisseur Media, where one year he won Connoisseur's National Salesperson of the Year.

His family ran a Ford dealership in Peotone. In recent years, Ken was often behind the wheel of his 1917 and 1927 Model T or his 1930 Model A Fords. He was active in the McLean County Antique Car Club, having served as president and vice president, and with the Prairie State Model T Club.

He enjoyed black-and-white films from the Golden Age of cinema, all things Disney, Jack Benny, and Laurel and Hardy. He belonged to the IATSE Local 193, the International Association of Theatrical Stage Employees and Motion Picture Operators of the United States and Canada, and for many years showed movies at Capen Auditorium on the ISU campus.

In addition to his wife, he is survived by daughters, Katherine (Matt) Shanks, Bloomington, and Kimberly (Andrew) Kaufman, Normal, and a grandson, Kevin Kaufman, all who will miss him dearly. He is also survived by an aunt, Leora Cross, Aurora; a host of cousins, several sisters- and brothers-in-law, and numerous nieces and nephews.

Visitation will be from 3 to 8 p.m. Thursday at the First United Methodist Church of Normal, 211 N. School St. Service will be at 10:30 a.m. Friday at the church. The Rev. Kathy King-Nobles will be officiating. Inurnment will be at a later date in Peotone Cemetery, Peotone. Calvert & Metzler Memorial Home, Bloomington, is in charge of arrangements.

Please view the obituary and share your condolences and memories at www.calvertmemorial.com. 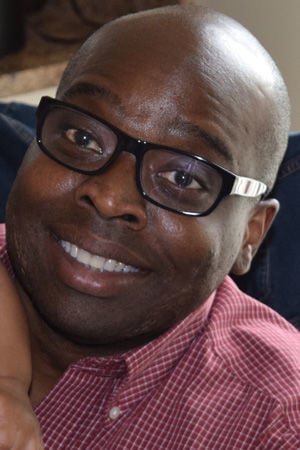 Visitation will be from 11 a.m. to 1 p.m. Friday at Carmody-Flynn Funeral Home, Bloomington. A private family burial will be in East Lawn Memorial Gardens, Bloomington.

Dayo was born March 27, 1978, in Ile-Ife, Nigeria, the son of Ebenie and Evelyn Lawale Adeniyi. His mother preceded him in death.

Dayo graduated from Normal Community West High School. He enjoyed sports, including Formula One racing; watching movies and Star Wars. He was resilient, kind, strong-willed and an amazing uncle to his nieces and nephews. He will be dearly missed by all who knew and loved him.

Condolences may be made at www.haenselfuneralhome.com. 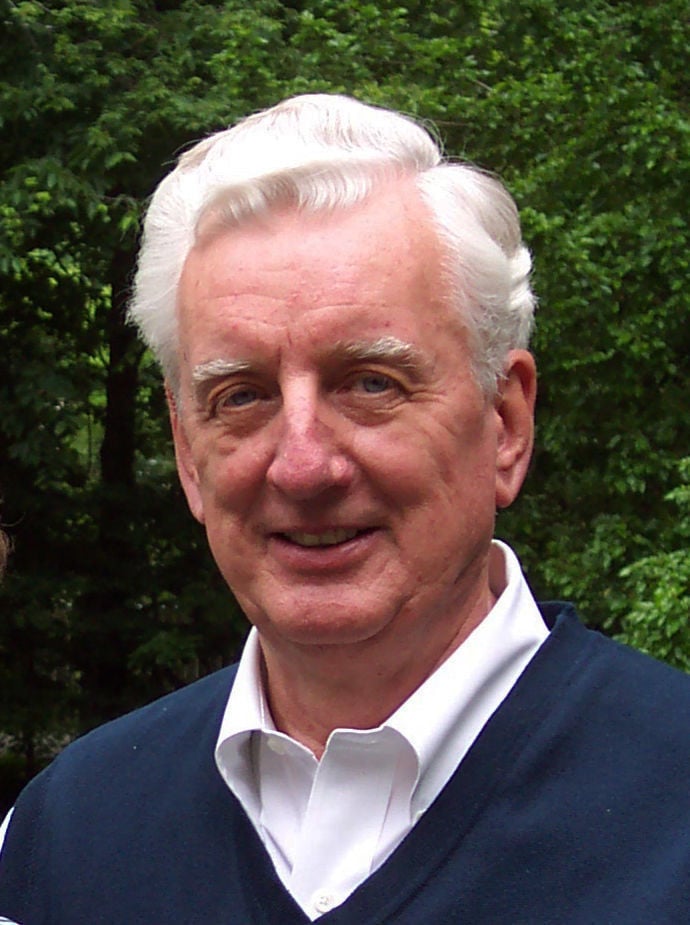 Sam was born April 21, 1933, in DePue. He received his bachelor's and master's degrees in architecture from the University of Illinois. Sam retired from State Farm Insurance in 1998 after 30 years of service as an architectural consultant in the investment department.

He was preceded in death by his parents and two brothers.

Sam was a Master Gardener, member of Golden K Kiwanis, an accomplished watercolor painter, and a lifelong Illini and St. Louis Cardinals fan.

Memorial contributions may be made to First Presbyterian Church of Normal or the Golden K Kiwanis Club of Bloomington-Normal. 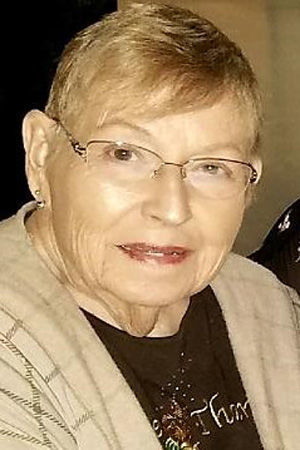 Virginia Sue Keysear was born June 25, 1939, in Urbana, to Charles and Guyneth Keysear. She married Roger Barlow on Nov. 12, 1960, at the Farmer City United Methodist Church. He survives in Farmer City.

She was preceded in death by her parents; an infant son, Timothy; and two brothers, Rick and Guy.

She attended elementary and junior high school in Normal and graduated from Moore High School in Farmer City in 1957.

Virginia was a teacher's aide in the Farmer City-Mansfield School District and then, later, an office manager for Classic Coil in Farmer City. She also worked as an engineer's aide at the Clinton Power Station, retiring in May 2000.

Virginia and Roger started their lives together in Farmer City in the 1960s, moved to Cissna Park in the 1970s, and returned to rural Farmer City in 1973. They shared a love for country music and local opry shows. Together, they helped create the Prairie Promenaders Square Dance Club in the 1970s. Virginia loved all of the family dogs, including Dugger, who lives in Indianapolis with Ken. That passion led her and Roger to volunteer with Mobile Mutts, an organization which helps transfer adopted dogs to their forever homes. She also enjoyed the holidays, including the annual traditions of baking, decorating and shopping. The team at eGov Strategies (co-founded by Ken) in Indianapolis always awaited and appreciated the arrival of new candies from Virginia's kitchen.

Visitation will be from 5 to 7 p.m. Wednesday at Calvert-Belangee-Bruce Funeral Home, Farmer City. Her funeral will be at 11 a.m. Thursday at the Farmer City United Methodist Church. Cremation rites will be accorded.

Memorials may be made to the Mobile Mutts Rescue Transport of Champaign.

Find out What's On with our January 25, 2020 TV and Entertainment Guide!

Find your next home with the January 24, 2020 issue of Home Market!