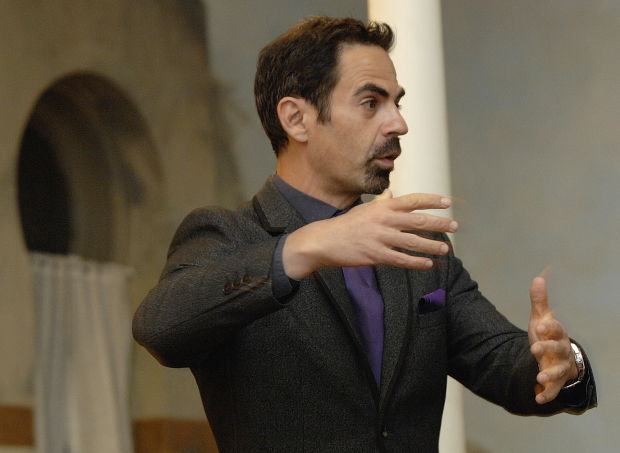 Joshua Lozoff prepares to do one of his magic tricks Sunday. 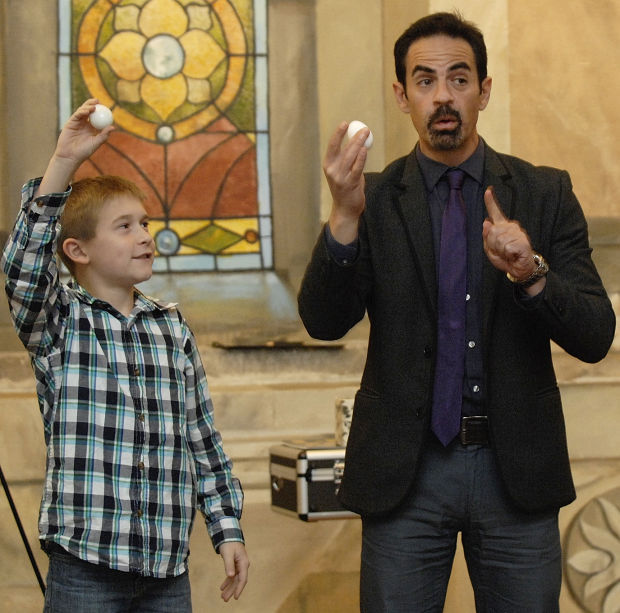 Magician Joshua Lozoff shows one of his magic tricks to Conner Betts, 10, of El Paso during a fundraiser for Labyrinth Outreach Services at the North Prairie Historic Synagogue in Bloomington on Sunday. 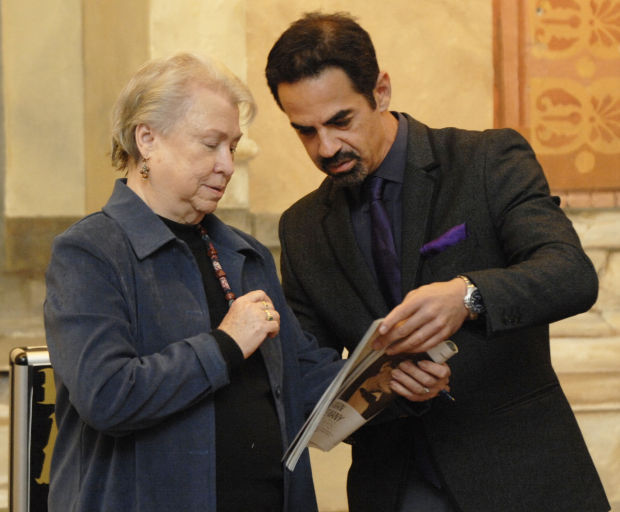 Magician Joshua Lozoff involves Evona Vangemeren of El Paso in one of his magic tricks.

BLOOMINGTON — Joshua Lozoff doesn't back away from the fact that at one time he was on one of television's most popular television shows. From 1991 to 1993, he had a recurring role on "Cheers," playing Gino Tortelli, one of waitress Carla Tortelli's eight children.

He embraces it, knowing it helps draw audiences to his magic show. No longer acting, Lozoff, is in his 15th year as a performing magician and brought his sleight of hand to Bloomington fundraiser on Sunday.

In fact, he says, he still watches "Cheers" reruns on late-night TV.

He also played Logan in the movie "Clueless," and also had a small part in "Teenage Mutant Ninja Turtles."

Based in Durham, N.C., he does more than 200 magic shows a year at venues ranging from the world's fair in Japan to a small fundraiser for 35 people Sunday at the North Prairie Historic Synagogue near downtown Bloomington. The local event benefited Labyrinth Outreach Services, which arranges housing for women returning from prison or jail.

"We are so fortunate to have Joshua come and help us out because he really understands what programs like ours are about and wants to help," said Mary Campbell, co-president of the Labyrinth board.

"We are so excited to have him come to Illinois and help with the Labyrinth Houses program and for the prisons, and he does it out of the goodness of his heart," said Sherrin Fitzer, women and family services administrator at Logan Correctional Center. "He knows how important these programs are and what they mean to those who are incarcerated."

Lozoff said his magic doesn't include big props or special assistants, making it perfect for small audiences or larger ones.

"It's about the experience and using the mind and learning what makes people tick," he said. "I have been doing this for 15 years and I'm still learning something every day because there is always something new and it is fascinating to me.

"Doing shows in prison is something that gives me satisfaction," he said. "It's my opportunity to share joy and wonder and amazement, which is what my show is about."

His California-based parents, Bo and Sita Lozoff, founded the Prison-Ashram Project in 1973. It helps convicts use their time in prison for spiritual growth.

"I have been a part of programs helping prisoners my entire life," he said. "Being able to do magic shows is perfect for that audience because you are dealing with all types of personalities and some of them may not be all that interested in it at first. But after you perform that first trick, you see an almost child-like awareness come over them and then you know they are entertained."

Watch now: How ISU is celebrating a virus-free homecoming

One former member of the Illinois General Assembly was indicted, along with his two sons, on charges of tax evasion this week, while a second former lawmaker pleaded not guilty in a separate case that alleged he committed federal tax fraud, among other charges.

Jennie Garth, alumnus of such TV favorites as “Beverly Hills 90210” and “What I Like About You,” has in more recent days gotten countless kudos from all across Central Illinois. One of Garth’s biggest fans, though, is her sister, who still lives in the Prairie State.

Bloomington woman is in custody on a charge for possessing a stolen vehicle, a class 2 felony.

Michael Bakana appeared in court Friday for an arraignment, but he requested a French interpreter, as an attorney said Bakana speaks only “a smattering of English.” A continued arraignment is scheduled for March 19, when a plea is expected to be entered.

Joshua Lozoff prepares to do one of his magic tricks Sunday.

Magician Joshua Lozoff shows one of his magic tricks to Conner Betts, 10, of El Paso during a fundraiser for Labyrinth Outreach Services at the North Prairie Historic Synagogue in Bloomington on Sunday.

Magician Joshua Lozoff involves Evona Vangemeren of El Paso in one of his magic tricks.