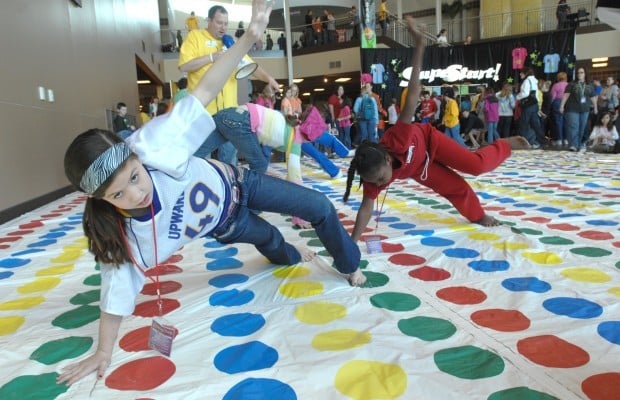 Katie Froelich, 10, of Normal, left, and Daisha Wiley, 9, of Bloomington take directions from Dave Owens of Downs while taking part in the ''Twisted'' game during the SuperStart! Christ in Youth preteen conference Saturday, March 6, 2010 at Eastview Christian Church in Bloomington. (The Pantagraph/STEVE SMEDLEY) 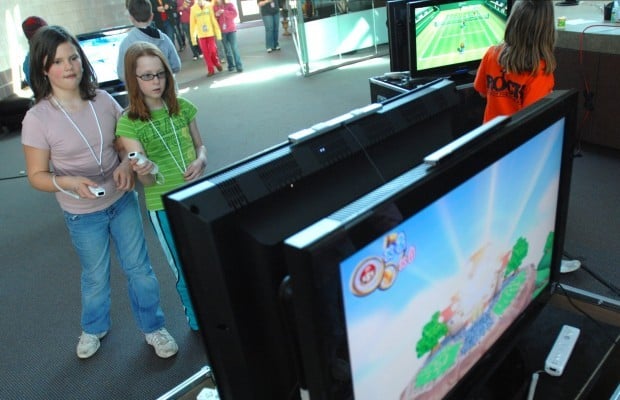 Andrea Jenna, 11, left, and her friend Winnie Slinker, 10, both of Waukesha, Wis., play a Wii Fit game during the SuperStart! Christ in Youth preteen conference on Saturday, March 6, 2010 at Eastview Christian Church in Bloomington. (The Pantagraph/STEVE SMEDLEY)
By Phyllis Coulter |

NORMAL —The heart-throbbing music blared, stage lights flashed, and 1,350 cheering fans sang along with a popular singer and her band.

What made this concert a little different from many was that it started at 8:30 a.m. Saturday at Eastview Christian Church in Normal, and the fans were fourth-, fifth- and sixth-graders from five states.

The concert of Yancy, a Nashville-based singer-songwriter of contemporary worship music, was part of a two-day event put on by Christ in Youth for preteens with a theme of “Good Works.”

“Everybody is so happy about everything, and showing how they love Jesus,” said Andrea Boksa, 11, a sixth-grader from St. John, Ind. “The first thing I’m doing when I get home is tell my parents I want to come again next year.”

On tour, Smith travels in a box truck carrying the show’s props. “When you get in a room like this, you say that it’s worth it,” he said of the six hours of road travel.

Students were already excited before Yancy started her high-energy songs of praise. The youths started Friday with activities including a giant-sized Twister game, dodge ball, video arcade games, and getting autographs from some of the stars.

The Lads, a New Zealand-based band, kept the energy high by shooting T-shirts into the crowd and telling Biblical stories through drama and song.

The Lads wrote a song that students could pay $1 to download. The money raised helps provide clean water in Zambia through the Active Water program. The tour had already raised more than $2,000 since January.

“They (the preteens) do good work before they even go home,” Smith said of their participation in the clean water program. “It’s cool to see this age group connecting with that message.”

Jeremy Gregorec, a preteen from Joliet, got the message. “It’s about doing good work,” said Gregorec as he waited in line to play dodge ball, adding “it’s also about fun.”

Gregorec and his group of nine from Crossroads Christian Church in Joliet stayed in a hotel, but many groups added to the fun by lodging overnight at the church.

Participants flowed into the community as part of the Plug ‘N’ Play portion of the event. The free time lets the small groups take part in different activities in the community with the preteens and adults building stronger relationships “that will last long after the SuperStart! is over,” Smith said.

It also helps the local economy, he said of having hundreds of youths discovering things to do here. Activities included swimming at Normal Community High School, visiting Children’s Discovery Museum, climbing at Upper Limits, playing in the park, bowling, and participating in a scavenger hunt at Eastland Mall.

“I think its amazing fun for this age group,” said Angie Lindsey of Mackinaw, a mom and volunteer at the event at Eastview Christian Church where she is a member. She shared the fun with her daughter McKenna, 10, a fourth-grader.

Carrillo in the post characterized Sheila Montney and Nick Becker as "dangerous authoritarians who got bought out by the police union." Here's how they responded.

The man found stabbed to death on a Bloomington street early Friday morning has been identified as Dale E. Baughman, 59, of Normal, according to a news release from McLean County Coroner Dr. Kathy Yoder.

A Downs man faces 12 charges for cocaine delivery and possessing a firearms as a convicted felon, deriving from his involvement in a local motorcycle gang, prosecutors said.

Watch now: Have you seen more coyotes in Bloomington-Normal? We asked the experts.

You may have seen them roaming a field on the outskirts of town, or perhaps even running through your backyard, but coyote sightings in springtime are nothing out of the ordinary in Illinois – and humans are likely the reason why they’re prevalent.

Former State Sen. Bill Brady and members of his family have been in a yearlong dispute with the landlord of a Jimmy John's that his family owns in Florida because ongoing construction has “alienated” their business, he said.

Shane R.E. Long, 35, is charged with unlawful possession of cannabis with the intent to deliver – possessing between 500 and 2,000 grams of marijuana – and one count of possession of cocaine.

Katie Froelich, 10, of Normal, left, and Daisha Wiley, 9, of Bloomington take directions from Dave Owens of Downs while taking part in the ''Twisted'' game during the SuperStart! Christ in Youth preteen conference Saturday, March 6, 2010 at Eastview Christian Church in Bloomington. (The Pantagraph/STEVE SMEDLEY)

Andrea Jenna, 11, left, and her friend Winnie Slinker, 10, both of Waukesha, Wis., play a Wii Fit game during the SuperStart! Christ in Youth preteen conference on Saturday, March 6, 2010 at Eastview Christian Church in Bloomington. (The Pantagraph/STEVE SMEDLEY)
© Copyright 2021 The Pantagraph, 205 N. Main St. Bloomington, IL | Terms of Use | Privacy Policy
Powered by BLOX Content Management System from TownNews.com.
You don't have any notifications.