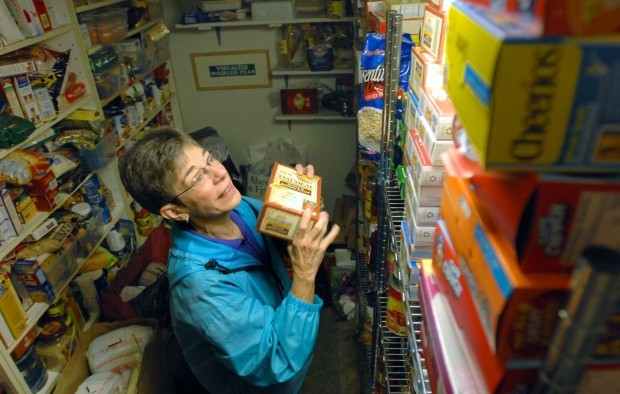 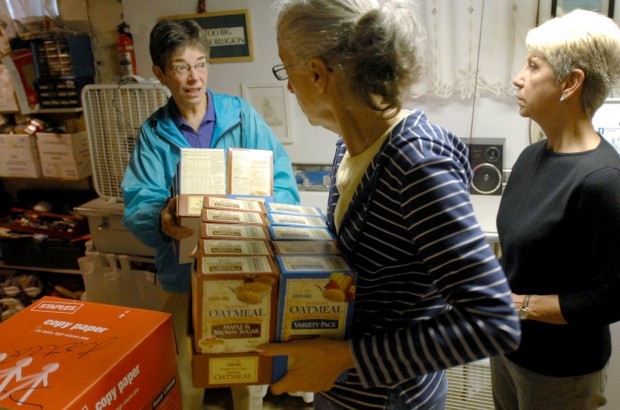 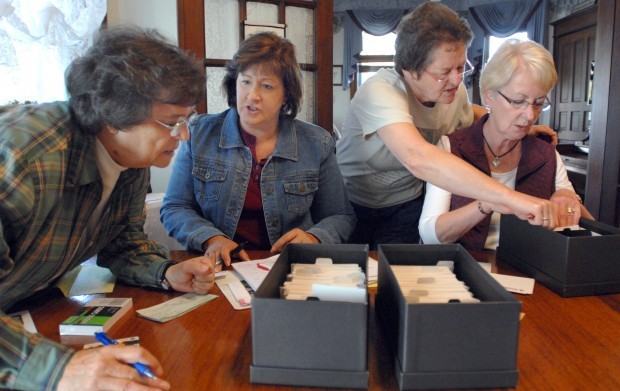 Keeping track of donated food and writing thank you notes at the Clare House, are, from left, Sister Glenda Bourgeois, Jan Schrad, Tina Sipula and Sally Heerdt. (The Pantagraph/STEVE SMEDLEY)
By Scott Richardson |

BLOOMINGTON -- Clare House food pantry founder Tina Sipula has never seen so many people in need, so it's no wonder the pantry's supplies are drained at the start of its massive annual food drive today.

In its 15th year, Sipula and drive chairman Dan O'Brien of Extreme Motors in Bloomington are upping their target from the usual seven semi-trailers of dry- and canned goods to eight or nine. Collections are starting a week early to give them a chance to reach the mark. The drive ends the day before Thanksgiving.

They know that raising the goal is iffy during in a tough economy, but it must be done, they said. When volunteers hand out free food every Wednesday and Friday at 1 p.m., the line outside Clare House at 703 E. Washington St. stretches twice as long, sometimes three times as long as it was a year ago nearer the start of the recession.

Huge turn-outs that reach down Washington to Clayton Street and south to Front Street were once reserved for the days before Thanksgiving and Christmas. Now, they're an every-week occurrence, she said.

"It started last summer (of 2008), but the really big, long lines have been since this summer," she said. "We usually went through two pallets of food a week for years. Now, it's six pallets. That's about six tons of food a week. The volunteers joke they don't have to go to the gym."

Lately, she's sees more young people who've lost their jobs or who just can't find work. Some stand patiently waiting for the food distribution to begin as small children cling to their legs. They leave with a bag of groceries and sometimes a few disposable diapers.

Food supplies dipped dangerously low in September until a couple of early food drives by Cross Pointe Church and Tri-Valley Middle School avoided a crisis. Sewa International, an Indian philanthropic organization, and the Boy Scouts also are having drives that will help until donations to the annual drive begin arriving, she said.

Crowds of more than 100 also are showing up at a soup kitchen Clare House operates on Tuesdays and Thursdays at St. Mary's Catholic Church, 527 W. Jackson St., said Sipula. The number of pre-school youngsters has climbed.

Still, O'Brien is optimistic. The food drive has weathered other challenges, such as the diversion of resources to the East Coast after 9-11 and to the Gulf Coast after Hurricane Katrina.

Success of the Clare House drive rests with the partnership with Schnucks, about 200 dedicated volunteers, media support and a charitable feeling that pervades the area when weather turns cold and people start to think about the holidays, O'Brien said.

"I'm concerned about (the recession) but optimistic," O'Brien said. "People are cutting back on everything. But every year seems to have its challenges and this community has continued to come back every year. McLean County rises to it."

Where: Donate from 6 a.m. to midnight daily at Schnucks, 1701 E. Empire St., Bloomington, and 1750 Bradford Lane just off Raab Road at Main Street, Normal. Bring your own food, or buy pre-packaged sacks of different sizes. Donations also can be dropped off at Clare House, 703 E. Washington St., Bloomington, from 9 to 11 a.m. and 7 to 9 p.m. Wednesdays and 9 to 11 a.m. Saturdays, and at Extreme Motors at 1019 Ireland Grove Road, Bloomington, during business hours.

Why: Clare House distributes food to the needy twice a week -- at 1 p.m. Wednesday and Friday. (There is no regular food distribute on the Friday after Thanksgiving.) The agency also operates the Loaves and Fishes free soup kitchen from 11:30 a.m. to 12:30 p.m. each Tuesday and Thursday at St. Mary's Parish Hall, 527 W. Jackson St., Bloomington.

Here's the list of liquor license holders who will appear before the Liquor Commission on Dec. 8.

As of Sunday, the Illinois Department of Public Health is reporting 656,298 total cases in the state, including 11,506 deaths.

McLean County: In COVID-19 order violations, charging decisions will be 'case by case'

McLean County's top prosecutor and Bloomington's mayor are at odds over enforcement of restrictions meant to curb the spread of COVID-19. Read more:

The driver told police where he was shot in Bloomington, authorities said early Thursday. They're asking for anyone with information to contact police.

No injuries were reported in the incident, which happened at 12:25 p.m. Saturday, law enforcement said.

“Unfortunately, I read the incorrect section of rules prior to announcing my candidacy, and the actual set of rules regarding residency (at least 1 year) do not allow me to continue to seek this office," he says.

Nikita Richards steps down as leader of McLean County Democrats

“I’m incredibly grateful for all that we’ve accomplished together,” says Richards.

Watch now: No fines or suspensions for 12 Bloomington bars for COVID violations

Twelve Bloomington bars were warned Friday by the city Liquor Commission that any future violations for disregarding state restrictions on bars and restaurants will result in fines or possible suspension of liquor licenses.

Watch now: In search of the perfect Christmas tree

Watch now: In search of the perfect Christmas tree

Watch now: In search of the perfect Christmas tree in Bloomington-Normal

Watch now: In search of the perfect Christmas tree in Bloomington-Normal

Keeping track of donated food and writing thank you notes at the Clare House, are, from left, Sister Glenda Bourgeois, Jan Schrad, Tina Sipula and Sally Heerdt. (The Pantagraph/STEVE SMEDLEY)
© Copyright 2020 The Pantagraph, 205 N. Main St. Bloomington, IL | Terms of Use | Privacy Policy
Powered by BLOX Content Management System from TownNews.com.
You don't have any notifications.