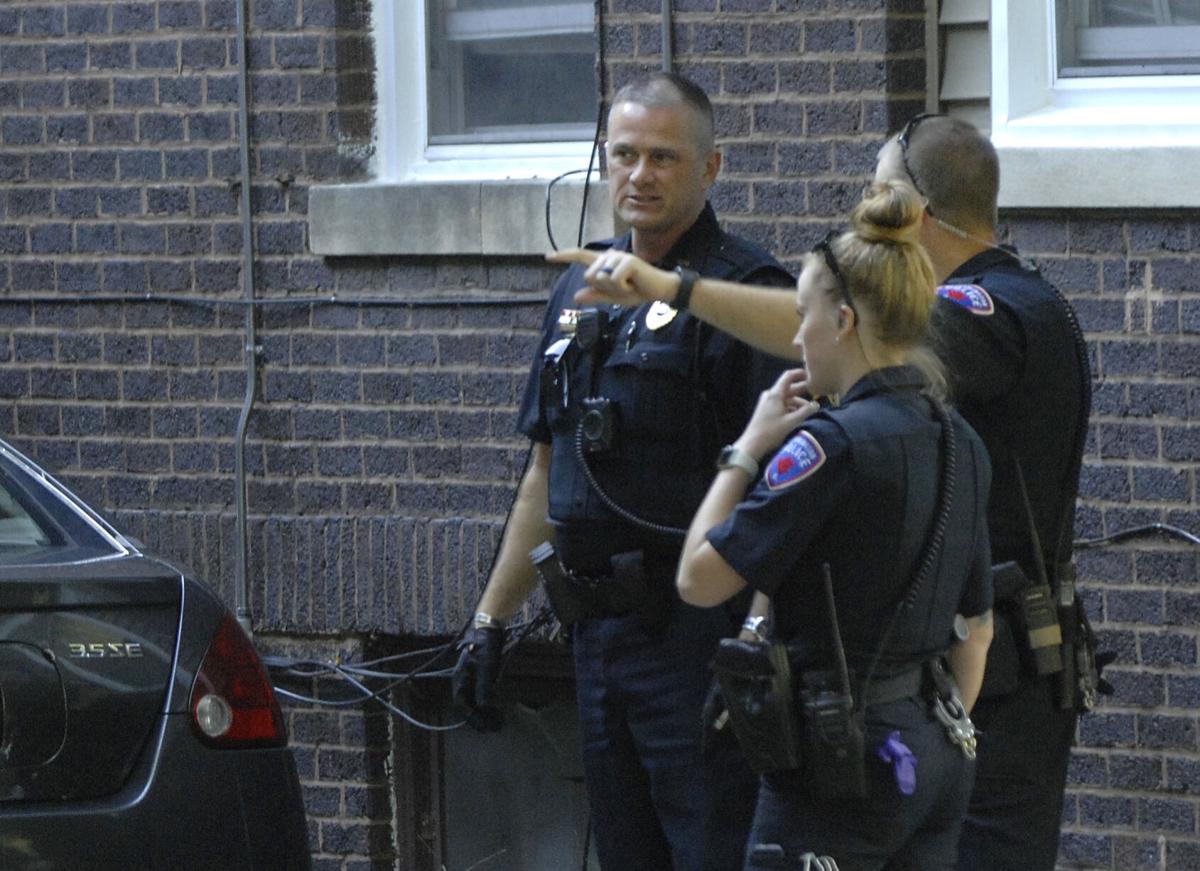 Bloomington police investigate the report of a shooting in the area of West Chestnut Street and North Roosevelt Avenue on Wednesday, Aug. 19, 2020. 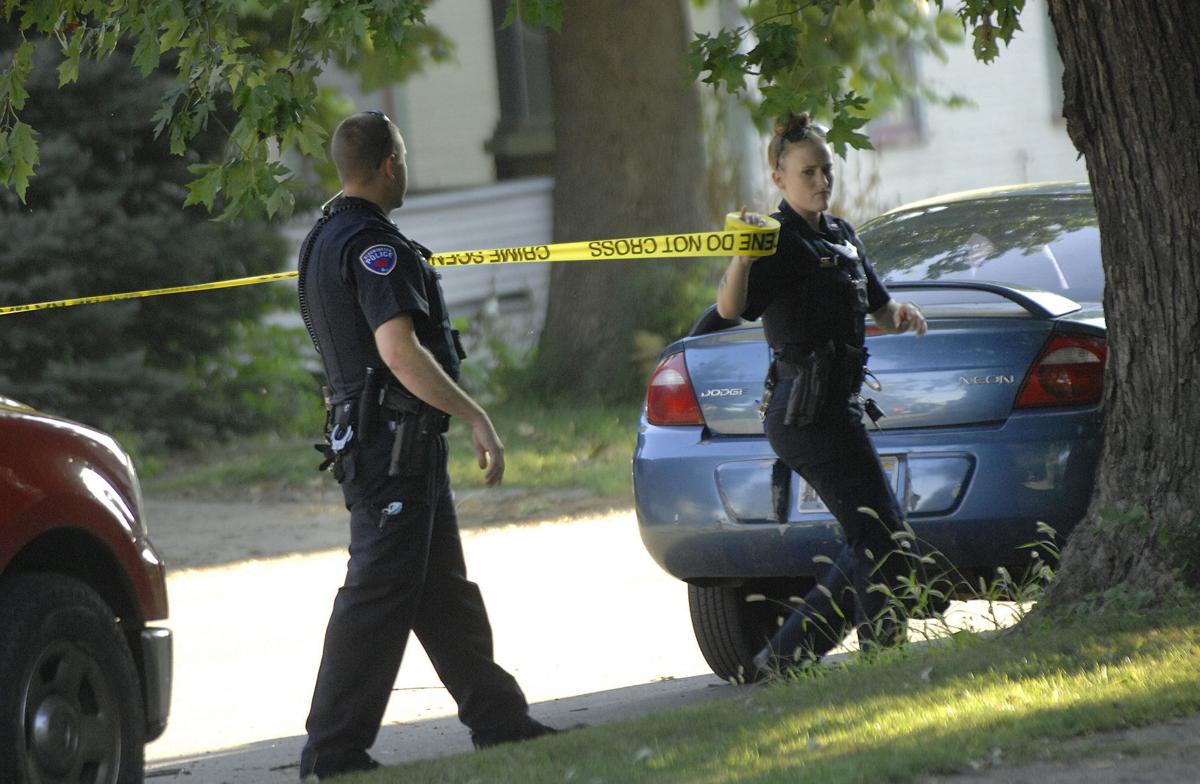 Bloomington police stretch crime scene tape across West Chestnut Street at North Roosevelt Avenue after one man walked to a Bloomington Fire Department paramedic unit after a report of a shooting in the area about 6:30 p.m., Wednesday, Aug. 19, 2020.

BLOOMINGTON — Police are investigating three shootings that were reported Wednesday evening and into the early hours of Thursday morning in Bloomington, leaving one man injured.

At 6:10 p.m. Wednesday, officers were called to the area of Chestnut St. and the 800 block of North Roosevelt Avenue for reported shots fired.

According to Bloomington police, a suspect shot had shot at an occupied vehicle that was driving in the area. The driver was struck in the arm by gunfire, suffering injuries that were not considered life-threatening.

He was transported to a local hospital, treated and released. 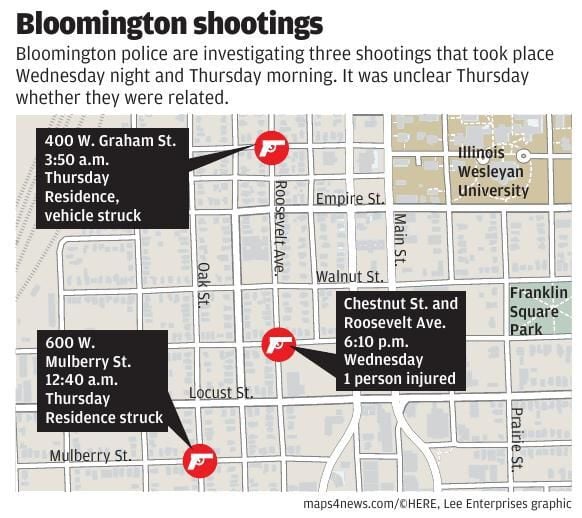 About 12:40 a.m. Thursday, another shots fired call brought officers to the 600 block of West Mulberry Street where they found an occupied residence had been struck by gunfire.

About three hours later, Bloomington officers responded to a call in the 400 block of West Graham Street were they found an occupied residence and an unoccupied vehicle were struck by gunfire.

No injuries were reported in the later two gunfire incidents, police said in a statement Thursday morning.

It is unknown if these three shootings were related; the investigations are ongoing, police said.

No arrests have been made.

Anyone with information related to the shooting at Chestnut and Roosevelt is asked to contact Detective Curt Maas at 309-434-2534 or cmaas@cityblm.org.

Information related to the shootings on Mulberry and Graham streets should be relayed to Detective Steve Fanelli at 309-434-2457 or sfanelli@cityblm.org.

A man sustained non-life-threatening injuries when he was shot Wednesday evening in the 800 block of North Roosevelt Avenue in Bloomington.

Law enforcement leaders are attributing a drop in gun violence during the first six months of 2020 to the coronavirus pandemic and related stay-at-home orders, as well as a focus on tracking down illegal guns.

No injuries were reported and no arrests have been made in two shootings in west Bloomington over the weekend, police said.

An exchange of gunfire fueled by revenge led to Juan Nash’s death in April 2019, prosecutors said Tuesday as the murder trial began for one of three men charged in the Orchard Road shooting.

Looking to get outside? Rader Family Farms hosts Sunflower Days festival this weekend 🌻🌻

Sunflowers are in full bloom, and Rader Family Farms is opening its doors for everyone to enjoy a field of yellow.

Two men remain in McLean County jail on multiple charges related to shooting into a building and a vehicle.

Police released details Wednesday of two shooting incidents that have taken place over the past week.

According to court documents, the drug transactions took place on various dates in May, June, July and August in Normal.

He was released on a $100,000 personal recognizance bond Wednesday.

An 18-year-old Carlock man is in custody for allegedly shooting a person in the foot in July.

Bloomington police investigate the report of a shooting in the area of West Chestnut Street and North Roosevelt Avenue on Wednesday, Aug. 19, 2020.

Bloomington police stretch crime scene tape across West Chestnut Street at North Roosevelt Avenue after one man walked to a Bloomington Fire Department paramedic unit after a report of a shooting in the area about 6:30 p.m., Wednesday, Aug. 19, 2020.