McLean County Board approves cannabis business regulations: Here's what you need to know

DECATUR — A police officer was shot and his ballistic vest stopped the bullet in an incident during a traffic stop Thursday night, Decatur police Chief Jim Getz said Friday.

Getz previously said two officers were treated and released from a local hospital after suffering injuries during the incident, which is being investigated by Illinois State Police. Getz said Friday afternoon that the officer who was shot was released from the hospital late Thursday and is recovering from his injuries.

The incident began after officers stopped the vehicle at 8:38 p.m. Thursday in the 1400 block of North Union Street, Getz said. During the traffic stop, there was a struggle with the suspect. Preliminary information indicates that at least one shot was fired by one of the officers, Getz said. 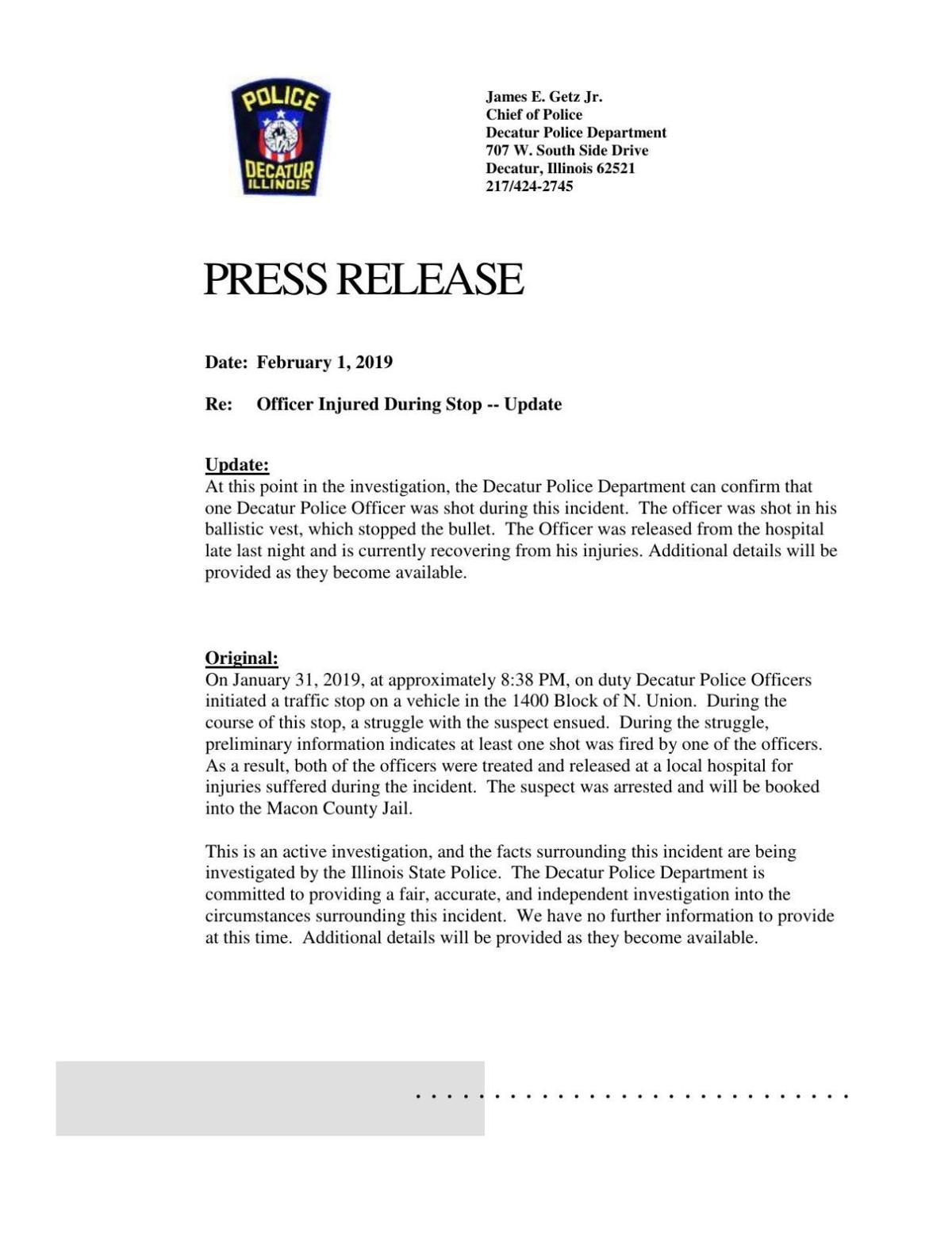 "As a result, both of the officers were treated and released at a local hospital for injuries suffered during the incident," Getz said. He did not describe how exactly the injuries occurred or who fired the shot that struck the police officer.

The suspect, who was not identified, was arrested and will be booked into Macon County Jail, Getz said. He did not say what preliminary charges the suspect would face.

Police have no further information to provide at this time, Getz said, adding that more details would be provided when they became available.

The Herald & Review filed a Freedom of Information Act request seeking video footage of the incident, either from a vehicle dashcam or neighborhood camera. The police department on Friday denied the request, citing the ongoing investigation.

Five Bloomington teens have been arrested in connection to a robbery in the southwest side of the city.

U.S. District Judge Sue E. Myerscough ordered the man in a Springfield courtroom to pay $5,500 in fines and $5,242 in restitution for concealing a  property transfer in Bloomington from the bankruptcy court, the release said. The man pleaded not guilty May 31, 2019.

Richard Rountree is accused of endangering his 8-year-old daughter’s life, ultimately leading to her death.

A man was reportedly chasing someone downtown with an ax Thursday afternoon.

An April trial date has been set for a Decatur man charged in the shooting death of a Bloomington man in December 2018.

Rountree pleads not guilty in death of daughter, 8; girlfriend previously convicted in case

The father of Rica Rountree pleaded not guilty Friday to endangering her life.