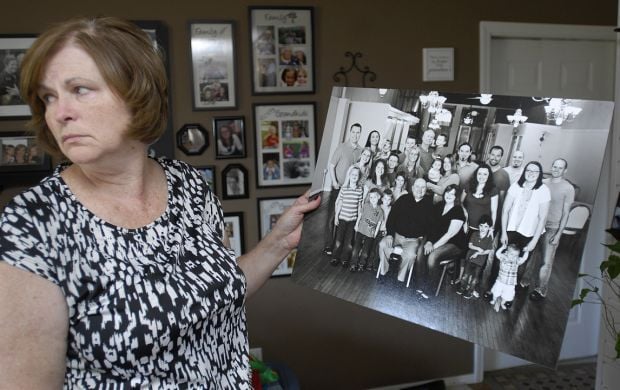 Danita Punke talks Sunday, Sept. 22, 2013, about the loss of her husband, Terry, who was shot July 20 while doing yard work at their home in rural El Paso. She holds a photograph of their family at a gathering on Memorial Day. (The Pantagraph, Lori Ann Cook-Neisler) 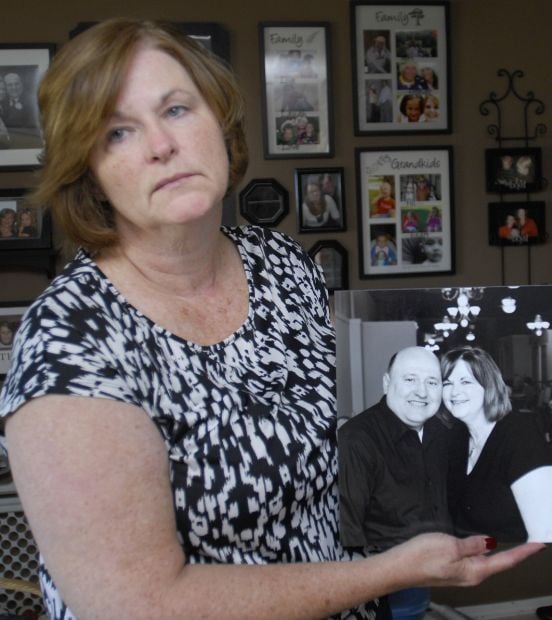 Danita Punke talks Sunday, Sept. 22, 2013, about the loss of her husband, Terry, who was shot July 20 while doing yard work at their home in rural El Paso. (The Pantagraph, Lori Ann Cook-Neisler)

EL PASO — Danita Punke thinks someone out there knows something. She isn’t looking to ruin someone’s life. She just wants to know what they know.

While working in his yard at about 11:15 a.m. on July 20, her husband, Terry Punke, 59, was shot by what Woodford County Sheriff James Pierceall has described as “an undisclosed projectile.” Terry died four days later at OSF Saint Francis Medical Center in Peoria. Despite pleas for answers, the Punke family knows very little about what happened and why.

Danita Punke said she was in her living room, working on her laptop computer when she heard a loud bang.

“All of the windows were shut,” she said. “It was loud and I thought to myself, ‘Who is the idiot who is shooting a gun out here?’ ”

About a minute or two later, she heard the downstairs door open. She thought maybe it was her father, who lives downstairs, but then she heard Terry mumble something.

“I now know, he was asking for help,” she said. “I thought maybe it was Terry talking to Dad or something, but a few seconds later, I heard an obvious cry for help. I got up, went down to the basement and Terry was standing there. He was just covered in blood.”

While waiting for rescue personnel, Terry Punke was able to communicate, said his wife. But the bullet had struck him in the cheek and trying to save his life took priority over getting specific details.

“The dispatcher on the phone was asking me questions about where he was standing when he was hit,” she said. “I asked him and he said he was out by the shed.”

He was able to walk upstairs and waited for the ambulance while sitting in the kitchen. Then, while still bleeding, he walked to the garage, opened the garage door, and took a seat on a chair.

“He told me to have them hurry up and get here because his hand and his legs were going numb,” she said. But he remained conscious and alert.

“He talked all of the way to the hospital,” added his son, Travis.

A city police officer from El Paso arrived and searched the residence. A pair of emergency medical technicians arrived next, followed by about a half dozen police officers and the ambulance.

“The police asked me what seemed like 100 questions,” she said. “But I didn’t know what happened.”

Included in the earliest theories was the possibility that Terry shot himself or that someone intentionally shot him.

“Terry was a wonderful person,” Danita said. “He never complained about anything. He had a heart as big as he was. He had six kids and he loved all of them.”

He worked at United Feed in Gridley as a warehouse manager, a job he’d had for 24 years. He and Danita had been married nearly 19 years.

“They asked his co-workers if anyone would want to shoot him, but I just don’t believe that was the case at all,” she said.

“He would do anything for anyone,” Travis added.

Now, more than nine weeks after the incident, Danita Punke still doesn’t have the answers she wants, and needs.

Police from El Paso, the Woodford County Sheriff’s Department and Illinois State Police searched the area, including the backyard and a cornfield that sits behind the property.

“We are still waiting on some ballistic tests and some other information,” said Pierceall, who has revealed no other details other than the investigation is continuing and his department is determined to find out what happened.

The Punke family expects to get information soon on the type of bullet that struck Terry. A bullet from a high-powered rifle, for instance, would travel much farther than a bullet from a pistol. But several factors would determine exactly how far.

“What the investigators are telling us is that once they know the caliber of the bullet, they can come up with an estimate on how far it might have traveled,” said Danita Punke. “But there are still other questions unanswered. We don’t know exactly where he was. We don’t know which direction he was facing.”

Besides straddling the corn field, the residence is across from a golf course. Trees surround the perimeter of the property. It wasn’t the first time Danita has heard gunfire in the area, but never that loud, she said. There are no public shooting ranges in the area.

Crime Stoppers is looking for leads and will offer up to $1,000 for information leading to an arrest and conviction. The family has added $10,000 to that amount. A Facebook page was set up by a family friend in an effort to gather information from anyone who might have seen or heard anything.

“I believe it was an accident, but I also believe that the person responsible knows,” said Danita Punke. “We are not looking to put somebody in prison for the rest of their life. I just want to know what happened, why it happened, and to make sure that it never happens to anyone else again. I also believe the person is probably scared to death. It’s a homicide because a bullet was involved. Our lives have been turned upside down and when they come forward, their lives are going to be turned upside down, too. But we have to know what happened.”

Watch now: Born in the time of Coronavirus

Bond has been set for a Bloomington man who was held in custody last week on an aggravated domestic battery charge.

Terrianne Hiehle, 24, is charged with possessing a Hyundai vehicle, as well as escaping arrest, for an incident that occurred Thursday, prosecutors said in court Friday.

A Farmer City man was released from jail and a Bloomington man remains jailed, as they’re each charged with nine counts of drug offenses.

BLOOMINGTON – A Springfield man is charged with aggravated battery to a police officer, a class 2 felony.

Danita Punke talks Sunday, Sept. 22, 2013, about the loss of her husband, Terry, who was shot July 20 while doing yard work at their home in rural El Paso. She holds a photograph of their family at a gathering on Memorial Day. (The Pantagraph, Lori Ann Cook-Neisler)

Danita Punke talks Sunday, Sept. 22, 2013, about the loss of her husband, Terry, who was shot July 20 while doing yard work at their home in rural El Paso. (The Pantagraph, Lori Ann Cook-Neisler)