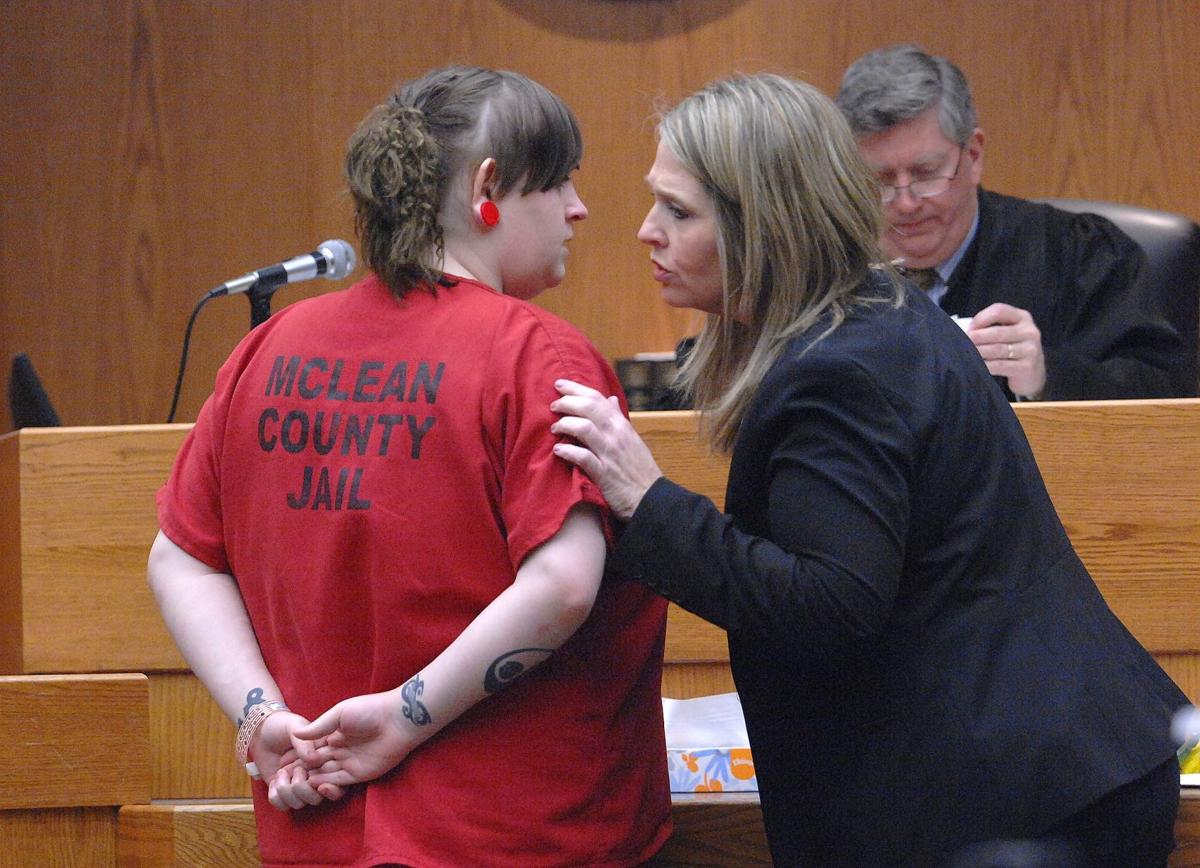 In this April 5, 2018, file photo, Brittney Mikesell talks with her public defender while making an appearance in McLean County Circuit Court in Bloomington. Mikesell faced charges in the death of her boyfriend, Cullen Hedrick, during an altercation at a Bloomington mobile home court in December. 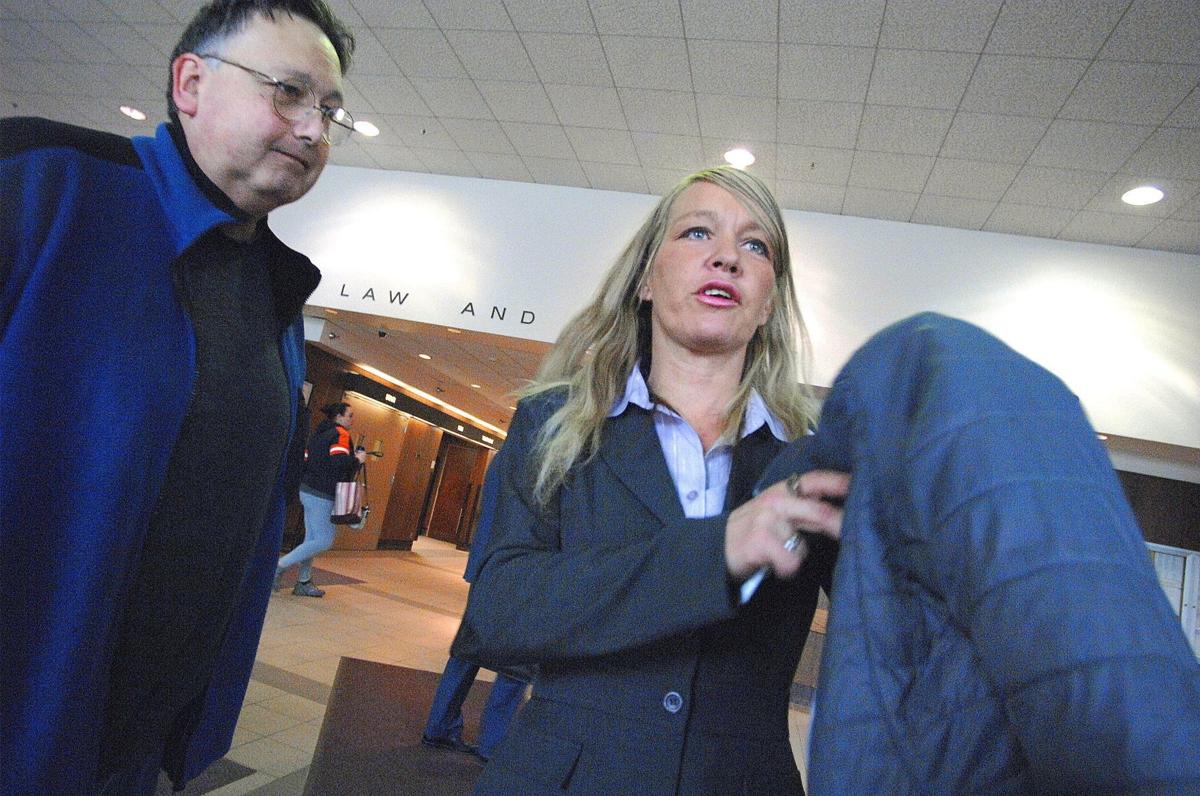 Brittney Mikesell's mother, Melody Justus, and godfather, Eric Alvarado, leave the Law and Justice Center after Mikesell made an appearance in McLean County court in April 2018.

BLOOMINGTON — Murder charges and other accusations were dismissed Monday against a Bloomington woman who accepted a plea deal just as jury selection was to begin in her trial.

Costigan sentenced Mikesell to 23 years in prison, but she could be out in about 10 years because she's already served 19 months in jail and will be eligible for day-for-day credit. She was eligible for extended sentencing because of previous convictions.

“We were happy to get the murder charge dismissed and Brittney is looking forward to bettering herself while serving her time, taking classes, and being released so she get her life on track,” said defense attorney Jennifer Patton.

Mikesell was accused of felony murder under a theory of accountability because the death occurred during commission of a forcible felony. The victim, Mikesell's boyfriend, Cullen Hedrick, died after he was stabbed in self-defense by another man.

After the hearing, Mikesell's mother, Melody Justus of Downs, said the family had misinformation about the sentencing.

“We were under the impression the three sentences would be served concurrently and she could be out within about five years,” she said. “But the judge made it clear that they were to be served consecutively.”

The plea deal was arranged over the weekend. Mikesell was in court last week, and attorneys said there was no deal in place. Previously, she had rejected an offer of 20 years.

“I think with the murder charge, neither side was completely comfortable about how a jury might rule,” Patton said.

Justus said her daughter suffers from mental illness and believes the penalty is too harsh.

“This isn’t what I wanted,” Justus said. “We have 30 days to appeal this plea and we will consider those options. She didn’t murder him.

"As far as spitting on an EMT, I believe that just came out of grief. Sometimes, you don’t know how you will react when you are under so much pressure.”

Prosecutors previously said that under state law, Mikesell was legally responsible for the death of Hedrick.

Court documents indicated that Mikesell and Hedrick went to a mobile home park in Bloomington on Dec. 2, 2017, to settle a dispute with another party when Rodney Daugherty parked behind Mikesell's vehicle. Following an argument, Hedrick began swinging a machete at Daugherty, who was pepper sprayed by Mikesell, prosecutors said. Daugherty stabbed Hedrick with a knife he took from his vehicle.

Daugherty was not charged.

“We hope this will bring peace to the victim’s family,” McLean County Public Defender Carla Barnes said. “Our office worked with the parties involved and our sympathy goes out to the Hedrick family.”

BLOOMINGTON — In June, Brittney Mikesell will face murder charges in the December 2017 death of her boyfriend, but jurors also will hear about…

In this April 5, 2018, file photo, Brittney Mikesell talks with her public defender while making an appearance in McLean County Circuit Court in Bloomington. Mikesell faced charges in the death of her boyfriend, Cullen Hedrick, during an altercation at a Bloomington mobile home court in December.

Brittney Mikesell's mother, Melody Justus, and godfather, Eric Alvarado, leave the Law and Justice Center after Mikesell made an appearance in McLean County court in April 2018. 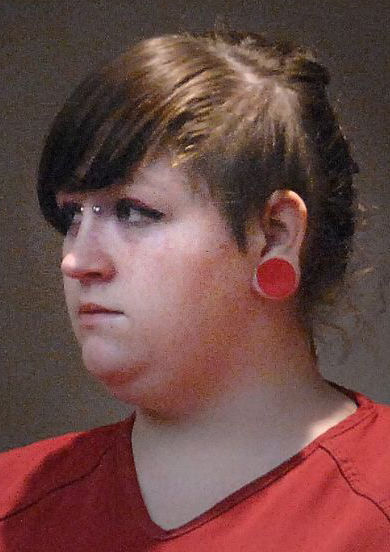