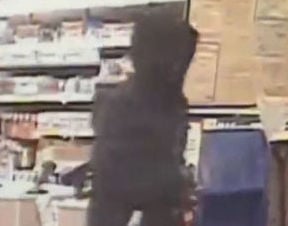 Bloomington Police released this still shot of the suspect in a Thursday night armed robbery of Walgreens, 909 N. Main St. 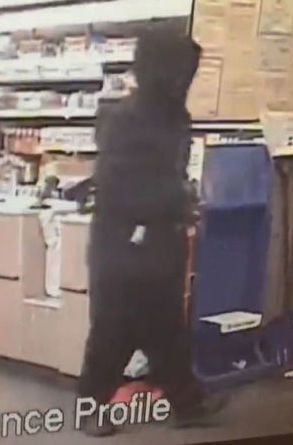 Bloomington Police released this still shot of the suspect in a Thursday night armed robbery of Walgreens, 909 N. Main St.

BLOOMINGTON — Bloomington police have released a photo of the man suspected of robbing a drug store Thursday night and say it's possible he is connected to some of the six other Twin City armed robberies that have occurred in the past few weeks.

Bloomington police said the man entered Walgreens, 909 S. Main St., about 8 p.m., displayed a knife and demanded money from an employee. He fled the store with an undisclosed amount of cash and ran west, police said.

No one was injured and no suspects have been identified.

The suspect in the Walgreens incident matches a description from at least two previous robberies. In other robberies, the suspect had a gun.

Thursday's suspect was described as a black man in his late 20s to early 30s who is 5 feet, 6 inches to 5 feet, 8 inches tall. He wore all black and his face was partially covered.

Among those, police think two businesses a little more than a mile apart in southeast Bloomington were robbed at gunpoint by the same suspect within a few minutes of each other about 9:30 p.m. Dec. 26.

The suspect in the robberies at Little Caesars Pizza, 2507 E. Oakland Ave., and CVS Pharmacy, 1130 S. Veterans Parkway, is described as a black male of medium height, wearing a black hooded coat with the hood up, black pants, dark-colored shoes and a dark mask covering the lower half of his face. Police said it was unclear how the robber fled the scene in both cases.

On Dec. 22, police were called to JB Hawks Discount Tobacco and Vape at 1100 E. Oakland Ave., Bloomington, and were told a man dressed in black displayed a knife and stole an undisclosed amount of cash about 6:15 p.m.

In Normal, police are continuing to look for two different suspects in two separate robberies in December, both at the Dollar General in the 1100 block of South Cottage Avenue.

On Dec. 23, the suspect was described as a tall, thin black man, standing about 6 feet 4 inches to 6 feet 6 inches tall, wearing dark clothes, a hoodie and a brightly colored scarf.

On Dec. 14, police described the suspect as a black man who was about 5 feet 8 inches to 5 feet 9 inches tall with dreadlocks and a goatee. He was wearing all black clothing, had a hoodie pulled up and was wearing gray gloves.

Anyone with information related to these robberies is asked to contact BPD Detective Steve Moreland at 309-434-2359 or smoreland@cityblm.org.

BLOOMINGTON — A Springfield man remains at large since a Dec. 23 residential burglary that led to a crash involving three vehicles that injure…

BLOOMINGTON — A man told police he was robbed at gunpoint Thursday night on a street in Bloomington.

BLOOMINGTON — Police in Bloomington are investigating another armed robbery in the city.

BLOOMINGTON — Police are asking for the public’s help in identifying two suspects in the theft of cosmetics from a Bloomington retailer on Jan. 11.