Police secure Best Buy in Parkway Plaza on Monday. Police had received information that the retailer had been targeted by looters. 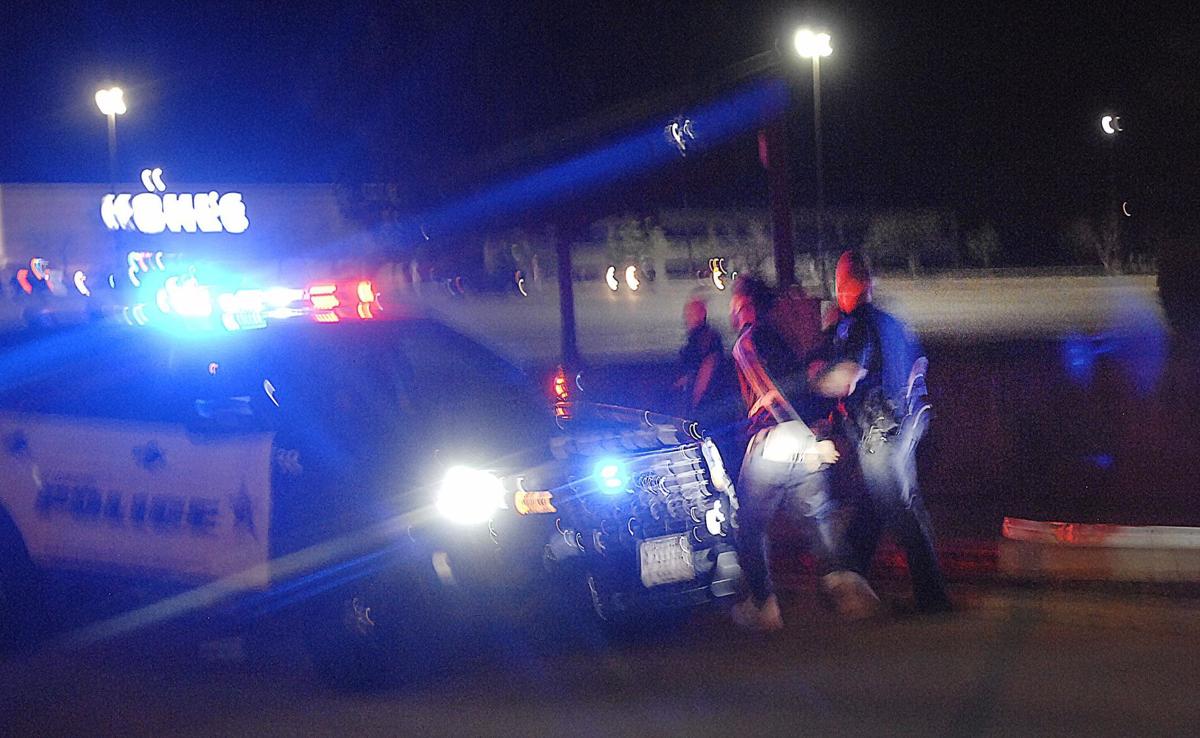 Bloomington police take a suspect into custody as dozens of looters are chased away from Kohl's at Eastland Mall after they entered through broken glass in a door about 11:30 p.m. Monday.

NORMAL — Videos on social media, court documents and police interviews are providing a clearer picture of the violence involved with looting at Twin City stores Sunday and Monday night.

Smashed windshields, rock-throwing vandals and a broken riot vest bear witness to some of the exterior destruction at Target in Normal and Kohl's in Bloomington, among others, as hundreds of people raised their fists in anger over the May 25 death of a handcuffed black man, George Floyd, in Minneapolis at the hands of police and endemic racism in America.

What is this world coming to!? This is my hometown! Bloomington, Illinois target. It’s getting out of hand!##foryou##foryoupage ##riot ##target ##crazy

About 30 people — all either local residents or those with local ties — have been arrested so far. In Peoria and Champaign, federal authorities issued charges against people for using the internet to incite violence and looting in those cities. In Bloomington-Normal, as elsewhere, the week also has been filled with peaceful rallies, vigils and prayer walks.

A Bloomington man, whom The Pantagraph has agreed to not publicly identify, was getting ready for bed shortly after midnight Sunday when he made a last check of email and social media and saw riot footage streamed live from Target.

He said a woman was posting the incident to Facebook Live.

He watched in disbelief, in real time, as people jumped on the hoods, roofs, and trunks of police SUVs and squad cars parked in front of the store, parallel to the sidewalk. Then it got worse.

“One or two individuals with a crowbar or something similar started smashing the windows of the first cop car,” the man said. “The windshield was shattered but intact, the two side windows were destroyed.

Moments later, the store's glass doors were smashed open. As the cellphone camera continued to record, several people entered the store and then left with merchandise.

A man who helped clean up Target shared Facebook photos of empty shelves, overturned displays, and aisles littered with heaps of clothing and toys.

The social media site Tik Tok has a related video: A man in an orange shirt takes a running leap onto the hood of a police SUV and jumps up and down while another man jumps on the hood of a second police vehicle and violently kicks the windshield.

Several other people sprint toward other vehicles, but go out of the frame when the snippet ends.

How it unfolded: Police give timeline of looting in Bloomington-Normal

Bloomington Police Officer John Fermon posted an advisory on social media on Friday: “Early this week we were made aware that numerous people, not involved in the criminal activity, may have recorded subjects in the act of committing these crimes. We are now asking for additional community support and assistance. We are seeking video footage, photos and social media screen captures of people involved in criminal activity in Bloomington-Normal during the late evening and early morning hours on May 31 through June 2.”

There have been no incidents in Bloomington since Monday night. “We have had a couple of cars driving around, but they left, probably because they learned from experience,” he said.

Normal Police Chief Rick Bleichner said the scenes depicted in the Facebook Live and Tik Tok videos, along with several others, are in sync with his recollection of the events.

“It’s been a pretty tough week, that is for sure,” he said. Along with damaged equipment, officers from both departments were injured: at Target, rioters threw frozen water bottles, rocks and bricks; in Bloomington, a man repeatedly smashed a rock into a squad car windshield.

Normal officers were at Target after a door was pried open and a mostly peaceful crowd eventually left. Officers split up to patrol other areas, but later returned to Target, where a larger crowd had returned.

That's when the vandalism began in earnest.

Bleichner said several people have asked whether police were correct in withdrawing once the violence started.

“There has been a lot of support, but there have been some critics and I’m fine with that,” Bleichner said. “When people talk about a stand-down order and asking why the police didn’t do anything, that bothers me because I was there and we did everything but stand down.”

He said situation took a few hours to develop.

“The crowd had dispersed but then they came back. At what point do you anticipate that at some point all of a sudden they are going to start throwing bottles and rocks and attacking the police?”

Bloomington police reported dozens of instances of vandalism over the two nights, and some store owners preemptively covered windows and doors with plywood.

On Monday night, Bloomington officers monitored reports of a "parking lot party" at Eastland Mall, where a group of people drove cars through the parking lot, occasionally taunting officers by getting out of cars and heading toward mall doors. But the group eventually drove north on Veterans Parkway, headed toward other large parking lots where police also were waiting.

An apparent break-off group then returned to Eastland Mall, and punched out a glass door at Kohl's. As police approached, a man used a rock to break a police car windshield, sending shards of glass into the face of an officer.

Police responded with chemical spray and flash-bang ordnance, but vandals broke into Kohl's and ran back outside with piles of merchandise. A number of people were taken into custody, but others were able to escape.

More arrests were made Tuesday, and the next three nights were peaceful. Looting-related arrests have continued daily, as have a variety of peaceful rallies. A man at a small demonstration Wednesday evening in downtown Bloomington was charged with a hate crime, accused of shooting off a smoke device that left a little girl with a cut on her face; earlier in the week, a man was charged with a hate crime after driving his motorcycle through a post-rally crowd and injuring two people.

“We refine our plans as the week goes along,” Bleichner said. “We had a couple of nights where things are more back to normal, but that doesn’t mean we are going to relax anything. We are going to maintain a very high presence. We will be highly visible. We will be alert for anything that might be a sign that there might be some additional trouble brewing.”

Both departments will keep an eye on social media and ask people to call 911 if they see anything suspicious.

“We will certainly be prepared throughout the weekend and into next week,” Bleichner said.

Mugshots: Arrests made in Bloomington-Normal looting

Visit pantagraph.com to see mugshots of the people who police say looted area stores and see photos from inside businesses.

Jack Patterson of Bloomington snapped these photos of the damage inside Target early Monday.

"We are continuing to follow leads and investigate and track down as much as we can, so we won't stop working on that," said Normal Police Chief Rick Bleichner.

Bloomington police are investigating a shooting in which one person was injured late Tuesday on the city's west side.

Anyone with information is asked to contact Detective Darren Wolters at (309) 433-3415 or dwolters@normal.org.

Bloomington police are asking for the public’s help identifying two suspects in connection to a gas station burglary early June 1.

Rioting and looting in the wake of some peaceful protests are adding up to a lot of unforeseen and unbudgeted overtime and other expenses for law enforcement departments in Bloomington-Normal.

Longing for fireworks? Don't set off your own, Bloomington-Normal police warn

Hearing a lot of fireworks in your neighborhood lately? You're not alone.

Police released details Wednesday of two shooting incidents that have taken place over the past week.

Police secure Best Buy in Parkway Plaza on Monday. Police had received information that the retailer had been targeted by looters. 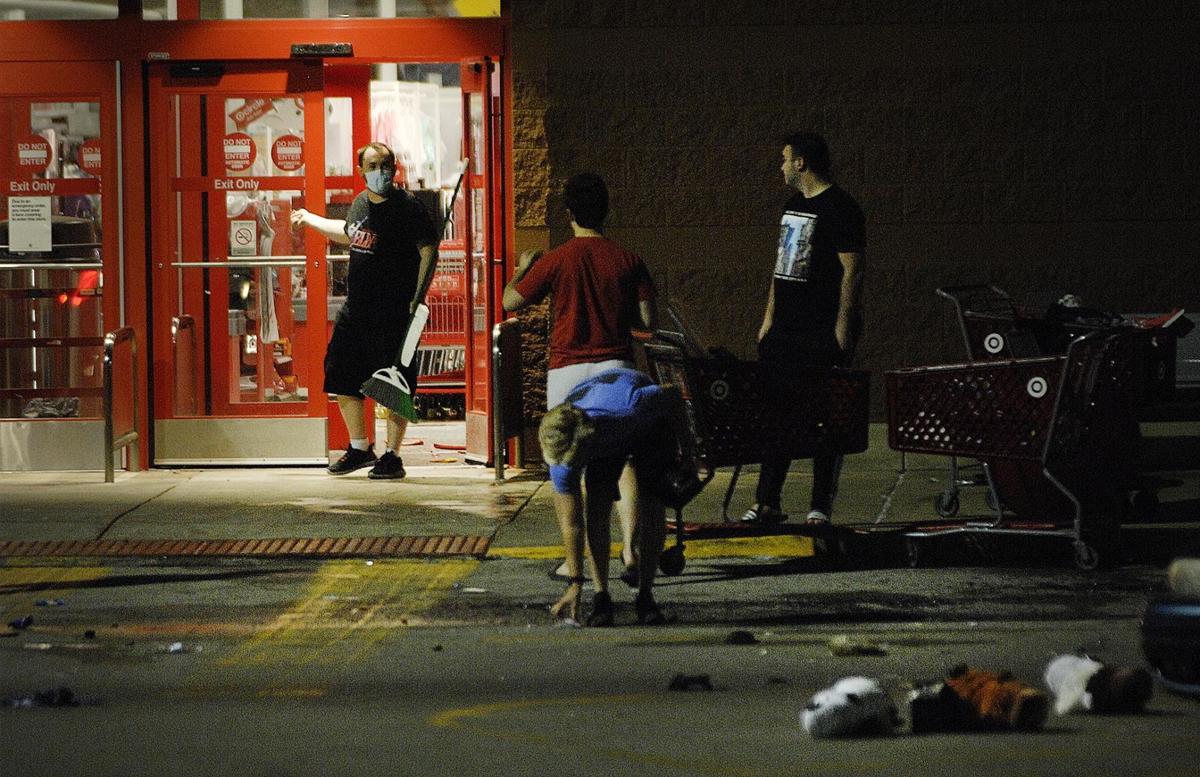 Volunteers clean up broken glass and debris left in the parking lot after looters struck Target in the Shoppes at College Hills early Monday.

Bloomington police take a suspect into custody as dozens of looters are chased away from Kohl's at Eastland Mall after they entered through broken glass in a door about 11:30 p.m. Monday.