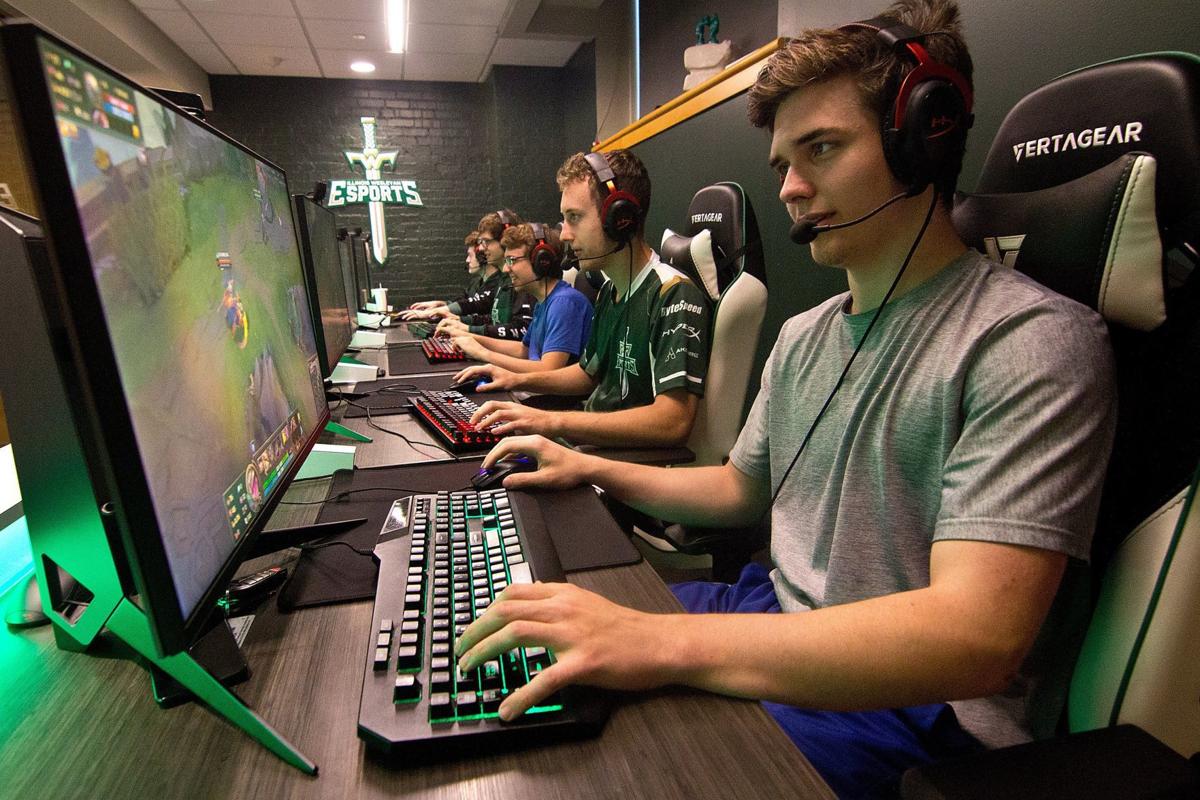 Illinois Wesleyan University student Eddy Kimbrough, right, plays "League of Legends" in the IWU Esports Arena at the Hansen Student Center in Bloomington. Illinois Wesleyan has had a varsity team competing since fall 2018. 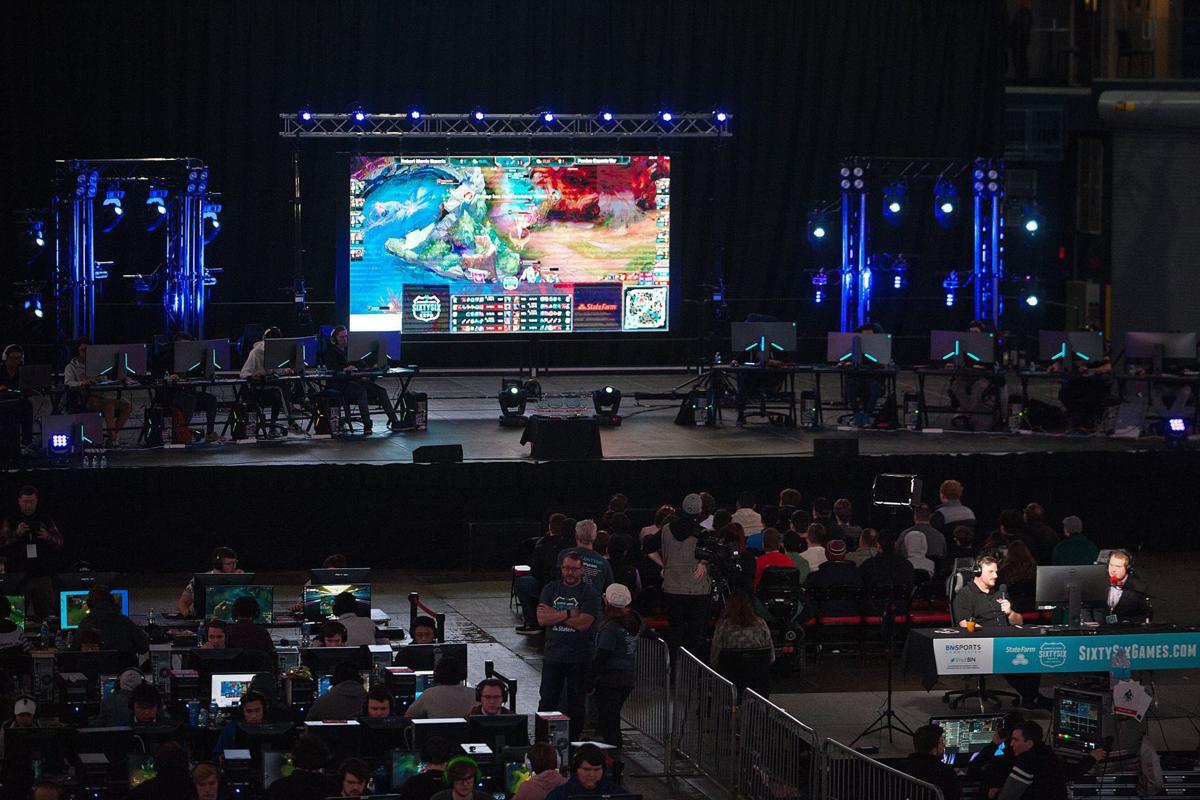 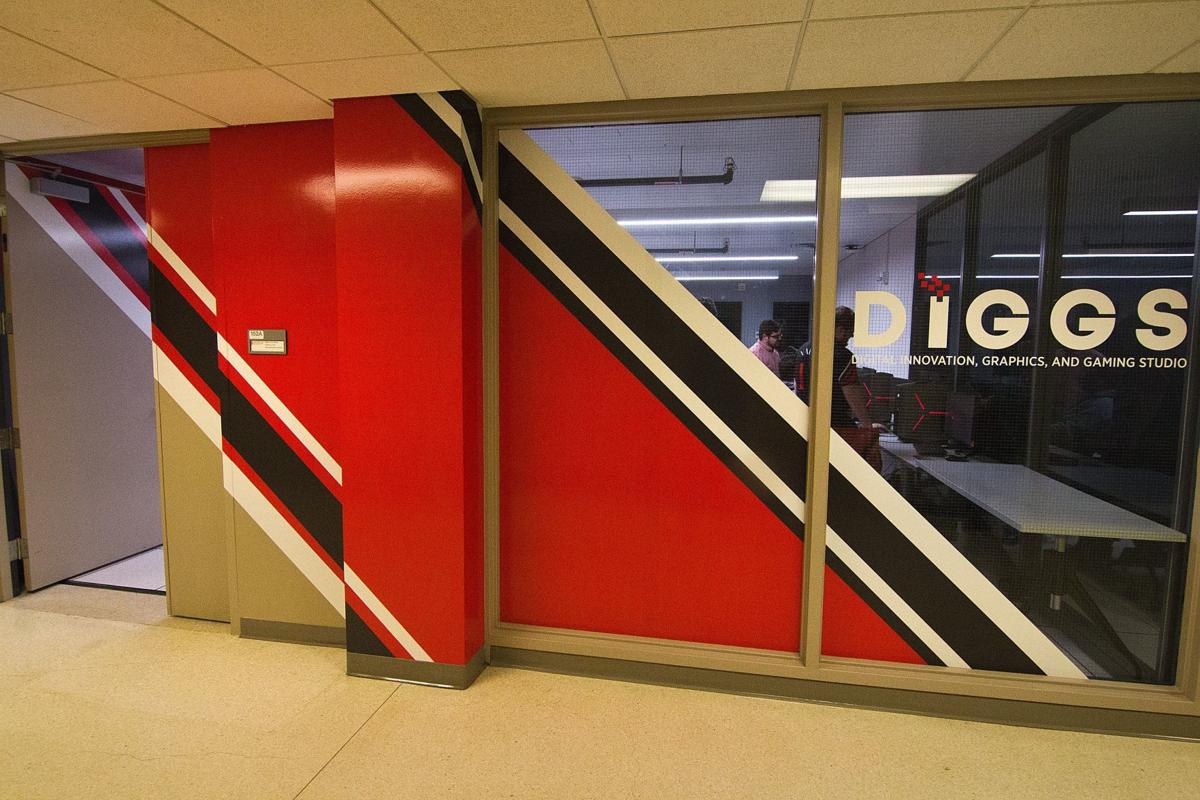 Illinois State University's esports program currently meets in the Digital Innovation, Graphics and Gaming Studio at ISU's Julian Hall in Normal. However, a new facility for the program is under construction on the second floor of the Student Fitness Center.

NORMAL — Skylar Guimond was watching the Super Bowl with friends when the subject of esports came up. His friends asked why anyone would watch people playing video games.

The irony wasn’t lost on Guimond, who is helping build a varsity esports program at Heartland Community College, where he is director of student engagement.

“We were watching people play football,” said Guimond. “What’s so different about watching someone else play a video game?”

Last month, the Sixty Six Games Expo drew crowds to Bloomington’s Grossinger Motors Arena for the second year in a row with League of Legends esports tournaments, a retro gaming lounge and an esports clinic for schools interested in adding or expanding esports programs.

The National Association of Collegiate Esports has grown from six institutions in 2015-16 to more than 130 and, Guimond said, “They say that number will triple in the next few years.”

For an example of how competitive gaming has exploded in popularity, look at schools in the Bloomington-Normal area.

Illinois Wesleyan University opened its Esports Arena in September 2018 and it is about to expand. Lincoln College started competing in fall 2019. Both Illinois State University and Heartland Community College expect to have varsity teams competing this fall. And esports could be added to the Illinois High School Association’s lineup this fall.

High school club teams compete at Bloomington, Normal Community, Normal West, Pontiac, Eureka and University High schools. They are among 94 schools listed on the IHSA website as competing in esports. A year ago, 30 or 40 schools were on the list.

“Our board could see far enough down the road that we needed to look into this,” said Kurt Gibson, IHSA associate executive director. 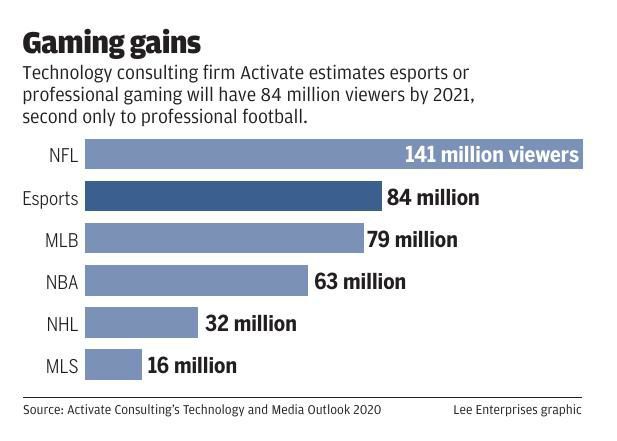 An advisory committee has been working on the issue for about a year, developing guidelines and exploring “what an esports program would look like,” said Gibson. The goal is to take the matter to the IHSA board for action in April.

“I’ve been telling people I felt like it was a matter of ‘when,’ not ‘if’” IHSA would add esports, said Gibson. “It’s beginning to feel like ‘when’ is next fall.”

ISU is planning a comprehensive esports program with not only a varsity team but also club teams and casual gaming spaces.

That’s the approach taken at the University of Akron, where Kirk was assistant director of esports.

“ISU is taking a holistic approach,” said Kirk, who received a master’s degree in recreational administration from ISU in 2016. “My interest is building out a gaming community. There are gamers that need to be involved beyond the varsity level.”

The Digital Innovation, Graphics and Gaming Studio where the ISU club plays is not big enough to accommodate the program ISU is planning. The university will develop a transitional facility on the second floor of the Student Fitness Center in a racquetball court that was never finished and is used for storage.

Kirk said the facility will have 24 computers, instead of the 12 in the DIGG studio, and be accessible to all students.

ISU will offer scholarships, although the exact number has not been determined. Kirk said the scholarships will go not only to players but also student coaches and support staff.

Heartland will offer three tuition waivers, which might be split among more than three students. Initial plans call for a six-member varsity team and six-member junior varsity team.

The college plans to spend an estimated $28,500 to upgrade an existing computer lab in the Workforce Development Center, adding gaming stations, tables and chairs. It is looking for a League of Legends coach.

The IWU Esports Arena in the Hansen Student Center has 17 PCs, monitors, headsets and custom chairs, but the program is outgrowing that space.

IWU's esports program will expand to six games this fall and move to a 5,500-square-foot training and competition facility in the former Printing, Publications and Mailing Services building on Franklin Avenue.

"We are eager to triple the capacity of our esports program to practice, compete and host tournaments, while also providing a welcoming, state-of-the-art space for our entire Illinois Wesleyan gaming community to enjoy," said Callum Fletcher, IWU's director of esports.

“One of the key things that excites me about this is how innovative this is,” said Guimond. “This is the beginning wave of esports. Heartland Community College is on the front line of that.”

FROM THE ARCHIVES: Recognize this? The Illinois State University campus through the years

The Illinois State University campus through the years

Flag brought down for the birthday of Malcolm X

Illinois State University is the latest school to announce plans for a competitive varsity esports team. The esports program will be under the leadership of Campus Recreation. The varsity program is expected to begin in fall 2020.

Esports will become a varsity sport this fall following action by the Heartland Community College board of trustees Tuesday. Start-up costs are estimated at $28,500.

5Q is a local feature published on Sunday. This week, we talk with David Kirk, who is the director of Illinois State University's esports program.

Illinois Wesleyan University student Eddy Kimbrough, right, plays "League of Legends" in the IWU Esports Arena at the Hansen Student Center in Bloomington. Illinois Wesleyan has had a varsity team competing since fall 2018. 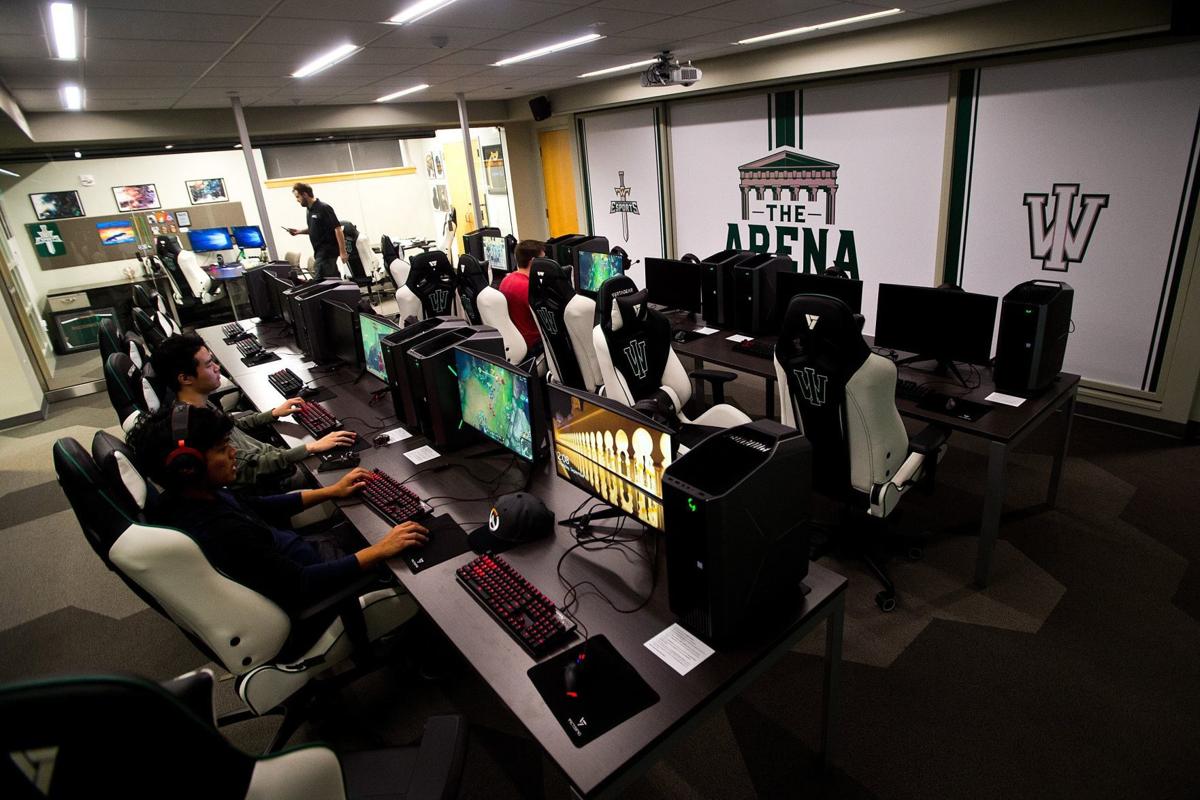 In September 2018 after its opening, Illinois Wesleyan University students play games at the IWU Esports Arena located on the second floor of the Hansen Student Center. 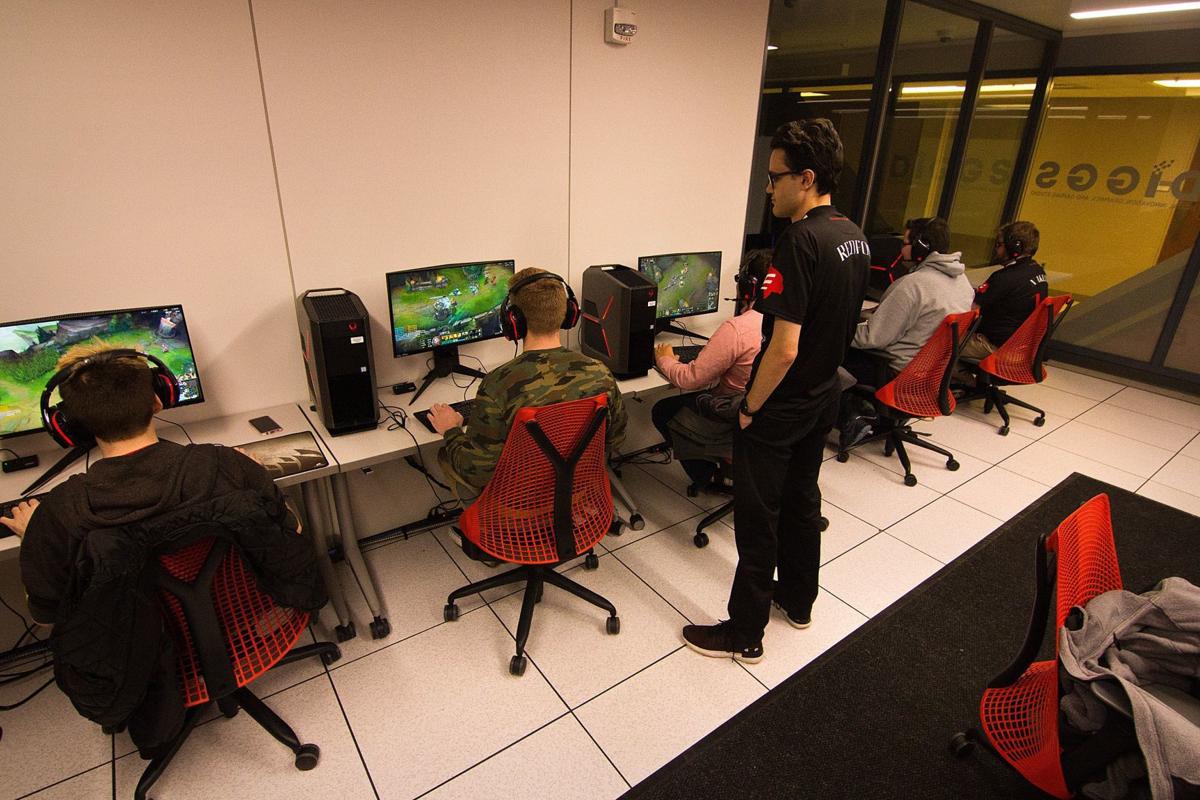 Illinois State University's esports program currently meets in the Digital Innovation, Graphics and Gaming Studio at ISU's Julian Hall in Normal. However, a new facility for the program is under construction on the second floor of the Student Fitness Center.