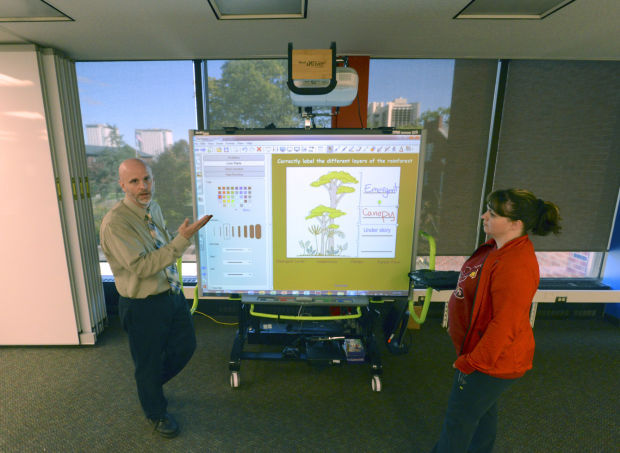 Ken Fansler, Illinois State University assistant dean of alumni relation, technology and facilities, describes features of a Smart board mounted on a iRover, in the "Studio TEaCH" room at Degarmo Hall. Fansler is with ISU senior Alicia Atkins of Clinton. 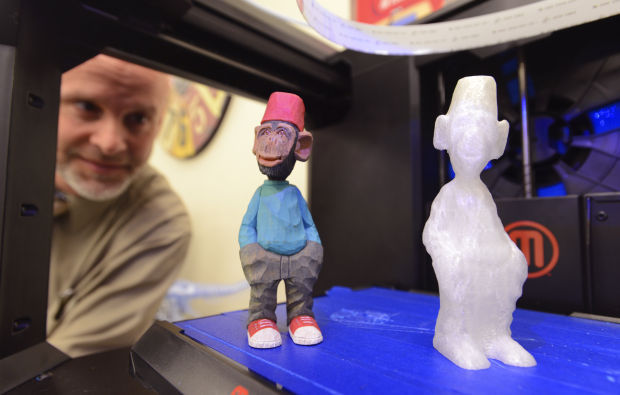 Fansler displays a model of The Whoopsie Monkey, modeled using the 3-D printer in the Studio TEaCH room at Degarmo Hall. 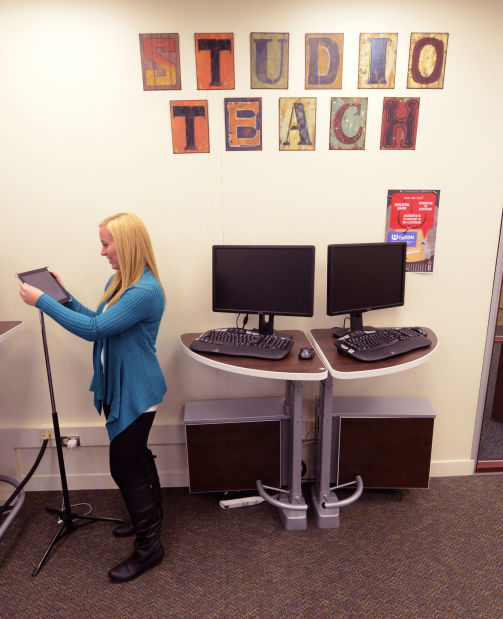 During an observation session at Normal Community West High School, the junior from Lombard saw a Smart board in every room. The interactive whiteboard incorporates a projector and computer.

“That was different from my high school,” Kott said. “We had chalkboards.”

To bridge that potential technology gap, the College of Education has put together an area filled with equipment likely to be found in 21st century classrooms and named it “Studio TEaCH.”

“'We put the "tech" in "teach,"' is our little slogan,” Ken Fansler, the college's assistant dean of alumni relations, technology and facilities, said to explain the novel capitalization.

In an area once home to two computer labs and a computer classroom, students will find more than just a Smart board. There also are 3-D scanners, 3-D printers, movable whiteboards that can be used to divide work spaces, iPads and a device called the Swivl, which can follow a person while recording video and audio.

All the walls are magnetic. A room divider that can be used to set up a classroom is a floor-to-ceiling whiteboard. Everything is on wheels: tables, desks, chairs.

“It's getting a lot more use than our computer labs ever did,” Fansler said of the studio, which was made in phases over three years.

Rather than cutting-edge equipment they won't find in future classrooms, “we put things in that we know are in the public schools,” Fansler said. “We visit our partner schools in the community and see what's there.”

The studio has been used for a speaker series, open to both students and practicing teachers. On Thursday, the college hosted a daylong conference on teaching in the 21st century.

Rather than hire a technical staff to run the studio, the college uses student workers — most of whom are education majors. One of those is Lauren Homerding, an elementary education major.

“I wanted to work here because they have a lot of technology that I'll have in the classroom,” the sophomore from Wilmington said. “I'm learning while I'm teaching them how to use it.”

Senior Michael Simboli of Schaumburg said students are able to experiment with “ways to bring the classroom into the 21st century."

The English studies major said, “The only limit is your imagination.”

Parker Boyes, director of technology services, said, “We want this to be more than equipment in a room.” A database of lesson plans is being developed for each piece of equipment.

“Our hope is that students will come in … and they'll be able to contribute to it,” Boyes said.

Fansler said, “I've been impressed by what happens in there that we never planned.”

The scanner even has be used to create 3-D printer versions of the “Whoopsie” monkey, a light-hearted “award” that Fansler said is given to tech workers.

Three Swivl devices were purchased with an eye toward a new requirement that takes effect next fall, Fansler said. That's when student teachers will have to start submitting a video of themselves teaching as part of their licensing process. Students are already experimenting with the Swivl, which can tilt an iPad or similar recording device up and down and side to side, following a remote microphone the student teacher wears.

“We wanted to test how far away you could get and how good the sound is,” said Kott, who said the device is very effective and easy to use.

Fansler said his dream is to have ISU's Studio TEaCH become a model for other teaching institutions.

NORMAL — The three Rs — reading, 'riting and 'rithmetic — are still part of education, but now they are joined by the four Cs — collaboration,…

Ken Fansler, Illinois State University assistant dean of alumni relation, technology and facilities, describes features of a Smart board mounted on a iRover, in the "Studio TEaCH" room at Degarmo Hall. Fansler is with ISU senior Alicia Atkins of Clinton.

Fansler displays a model of The Whoopsie Monkey, modeled using the 3-D printer in the Studio TEaCH room at Degarmo Hall.