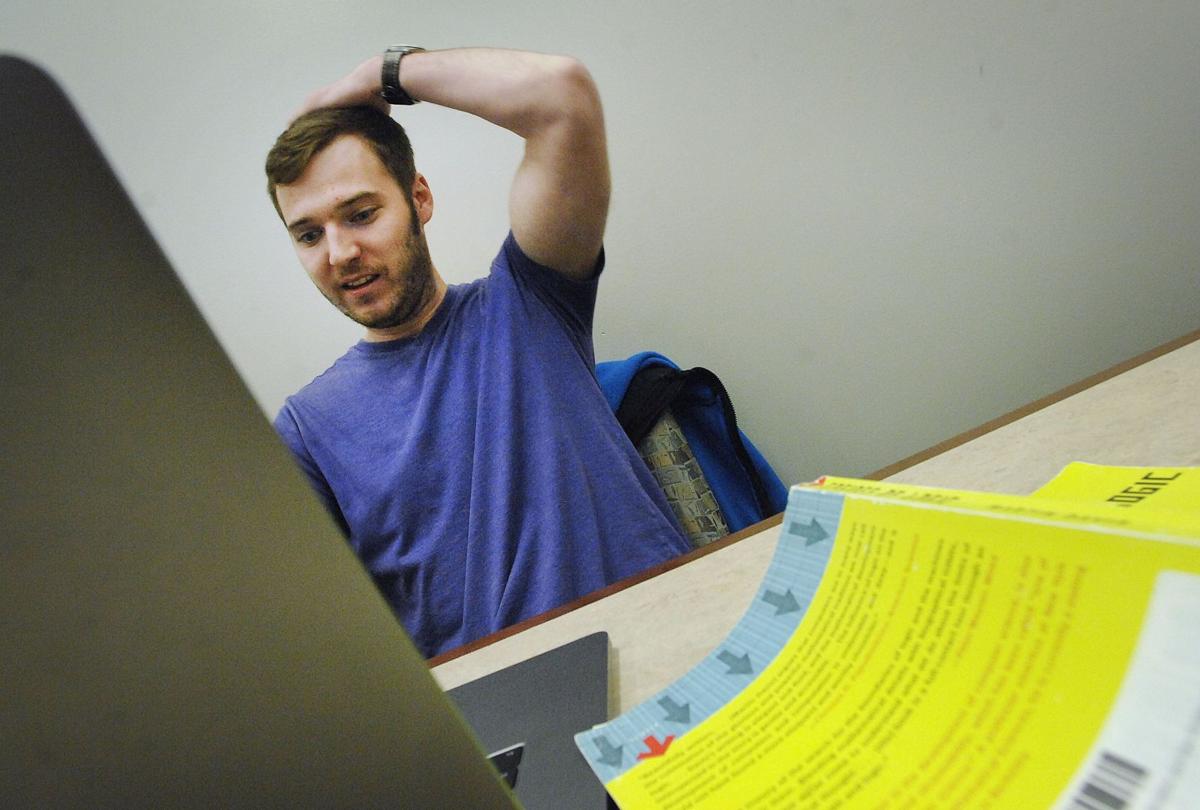 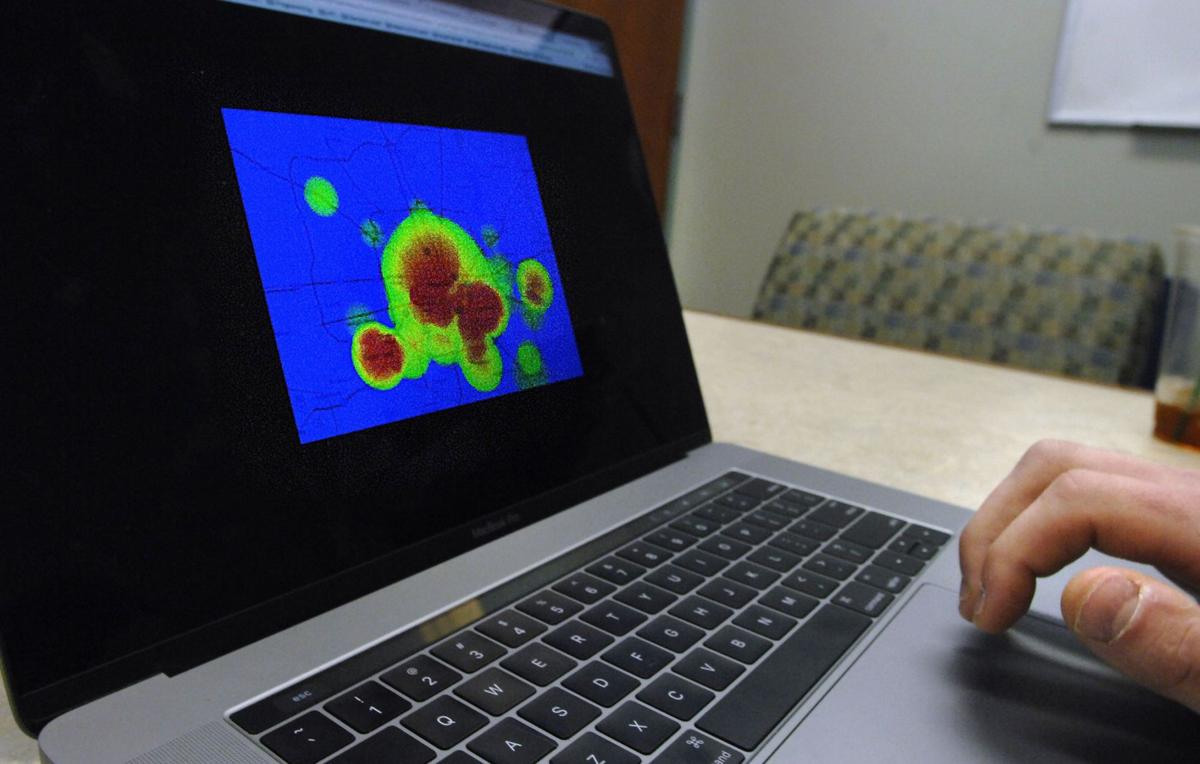 Matt Price, who is graduating from Illinois State University this week with a degree in computer science, displays a map that tracks the distribution of prostitution across the Houston, Texas, area as part of his work combating human trafficking. 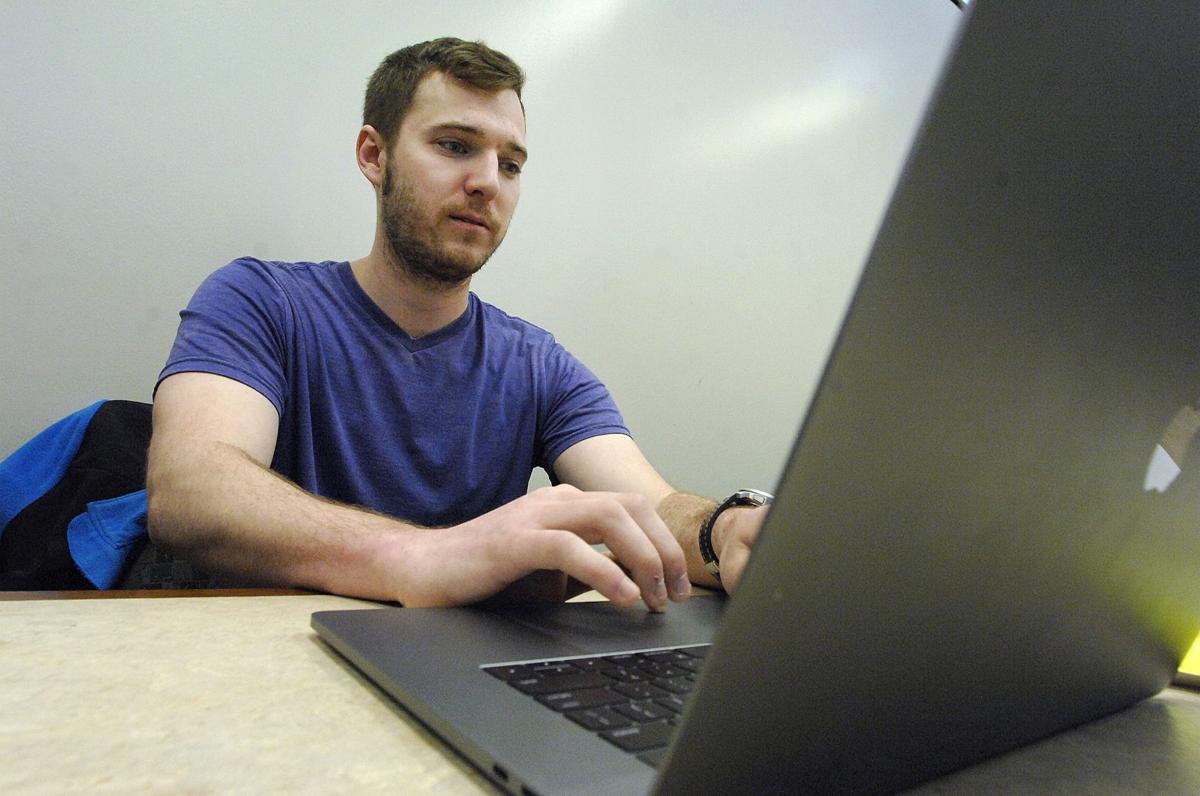 Matt Price, who is graduating from Illinois State University this week with a degree in computer science, is working to develop software that analyzes data to identify patterns of activity consistent with human trafficking.

NORMAL — Matt Price already knows what he will be doing after he graduates from Illinois State University on Saturday: helping in the fight against human trafficking.

In fact, the computer science major from Frankfort has been working with the Nebraska-based Human Trafficking Initiative for about 1½ years.

He started part time doing programming work and more recently became a full-time worker while finishing his studies at ISU.

“It's a good issue to get involved in and a good opportunity to work in programming,” said Price. “It's taken off since I started.”

Human trafficking is “when somebody gets coerced into selling their bodies,” said Price, but it can be difficult “to distinguish between somebody who is willing as opposed to someone who is actually trafficked.”

His sister, Crysta Price, started work on the issue about five years ago as a research project while studying at Creighton University in Omaha. Now she is co-director of the initiative with Terry Clark, a professor of political science at Creighton.

The initiative is housed in Creighton's Heider College of Business.

His sister is focused on data science while Price is responsible for programming that scans online data regarding prostitutes, he explained.

Part of the challenge is to develop algorithms that help make connections between ads and the people behind them while also developing a uniform approach for identifying who is a likely trafficking victim, how prevalent it is and where it is taking place, explained Clark, who is Matt Price's supervisor.

Clark said, “We felt like we were spinning our wheels until Matt came on” as a contractor in late 2015.

Clark said Price's programming skills are impressive. He works as part of a team and is “an integral part of the effort,” said Clark.

The main source of the data is a classified advertising site called Backpage, which Price called “the Craigslist of prostitutes.”

In testimony before a congressional committee in 2011, Yiota Souras of the National Center for Missing and Exploited Children said, “A majority of the child sex trafficking cases reported to NCMEC involve ads posted on the Backpage.”

Although Backpage closed its “adult” section earlier this year, in the wake of congressional investigations, media reports say the offers of “escorts” have just moved to other parts of Backpage.

“Everyone wants a quick fix,” said Clark, but “we need to put in place a holistic, systematic approach.”

That includes not only cracking down on traffickers or customers but looking at causes, how to provide services to those caught up in it, what those services should be and where they should be delivered, he explained.

“This is a very broad effort,” he said.

Price is working on a platform where law enforcement agencies can access leads. One such leads platform for Nebraska is expected to be operational within a month, he said.

In fact, his sister has been calling him frequently — even while he was studying for finals — to check on how the platform is coming along.

“She has high expectations,” he said.

Price said he “learned a ton” at ISU, and his professors have been helpful when he has questions.

“I'm able to relate what I learn in class to what I'm doing at work,” he said. “It makes things a lot more relevant in class.”

Illinois State University will have commencement ceremonies Friday and Saturday for its individual colleges. More than 3,700 students are expected to take part.

Everyone could use a little good news.  That's why we've compiled some of 2017's most uplifting local stories!  Guaranteed to brighten your day.

Matt Price, who is graduating from Illinois State University this week with a degree in computer science, displays a map that tracks the distribution of prostitution across the Houston, Texas, area as part of his work combating human trafficking.

Matt Price, who is graduating from Illinois State University this week with a degree in computer science, is working to develop software that analyzes data to identify patterns of activity consistent with human trafficking.