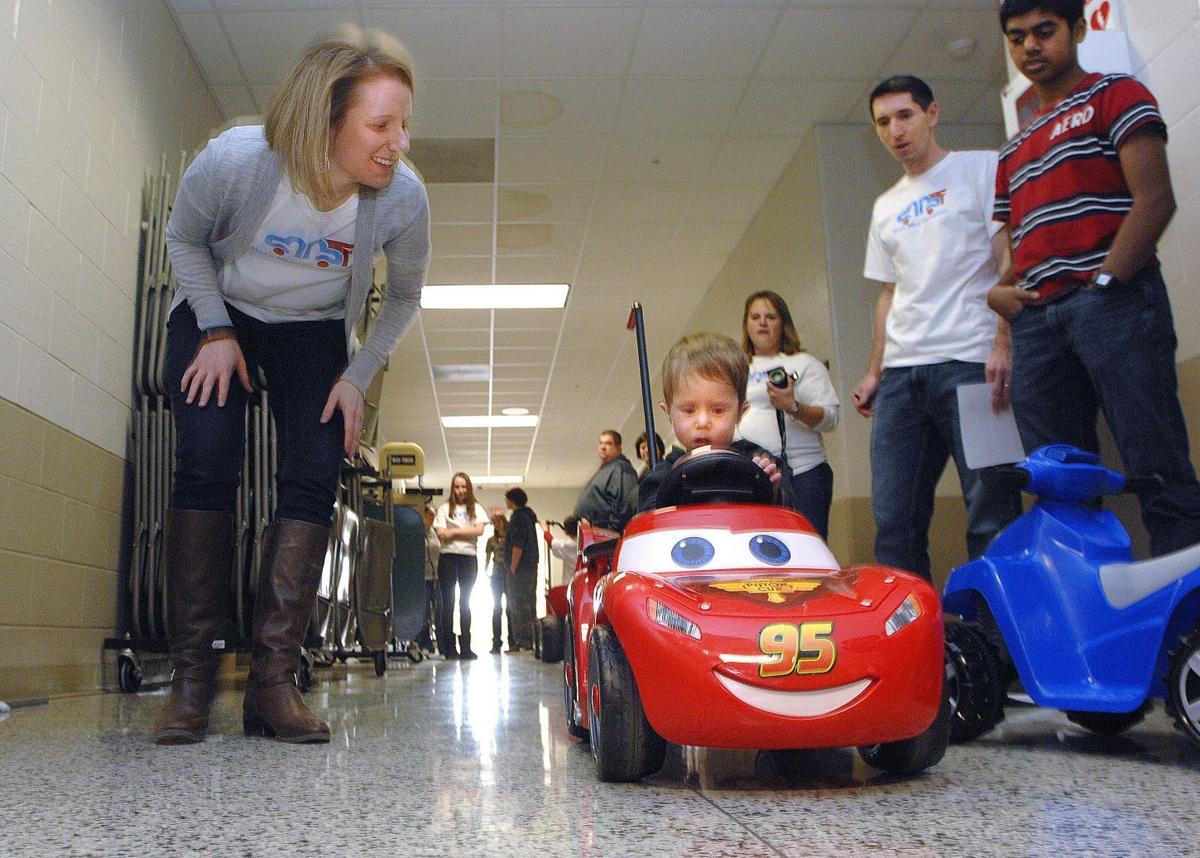 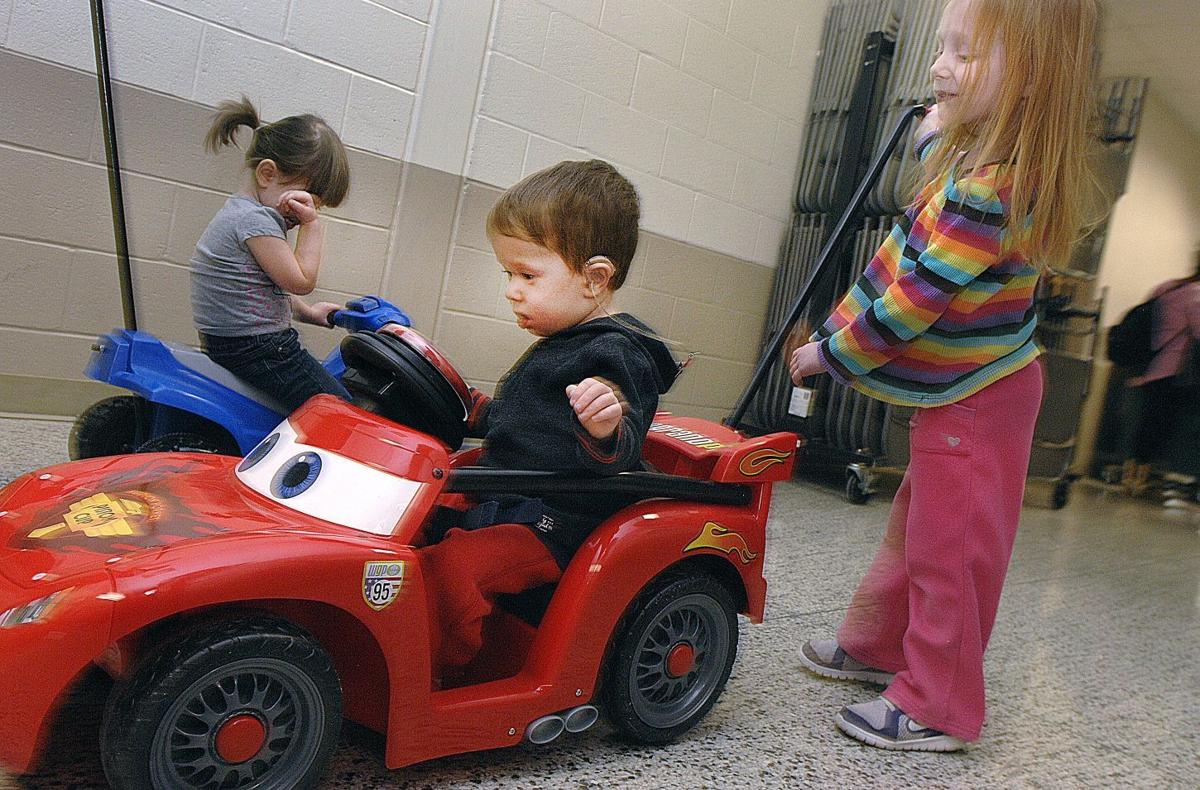 Max Chapman, 2, watches in wonder as his motorized car maneuvers down the hallway at Normal Community High School. His sister, Ellie, 5, keeps watch on his steering. 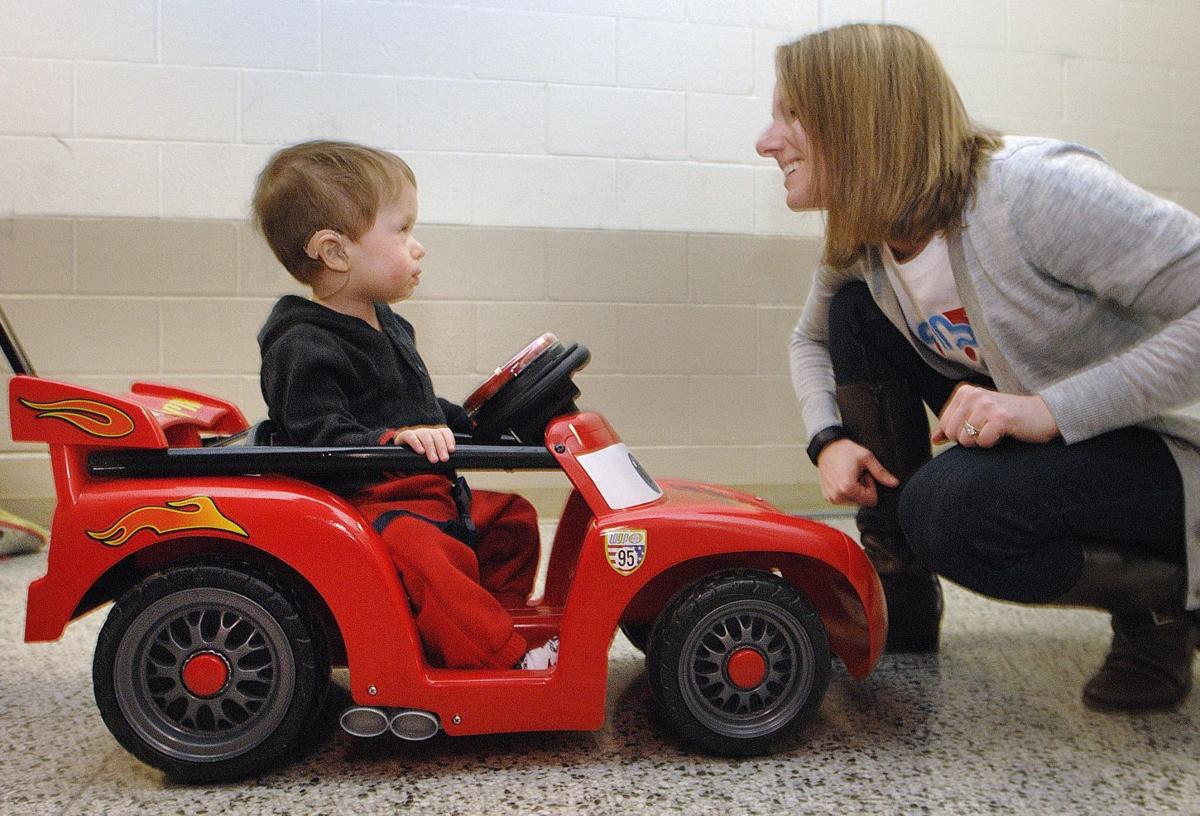 Max Chapman, 2, gets encouragement from his mom, Corin, while he tries out a motorized car at Normal Community High School.

On a warm day last summer, 5-year-old Ellie took off down the sidewalk on her bike and 2-year-old Max followed close behind in his red, battery-powered car.

Ellie pumped her feet on the bike pedals, leaning forward in her seat. Max pushed harder on his steering wheel, zooming past her.

Without his car, Max wouldn’t be able to race Ellie through their Bloomington neighborhood.

Without the car, he wouldn’t be crawling.

Max has Peroxisomal Biogenesis Disorder, a genetic condition that affects 1 in 50,000 children. Symptoms include difficulty with hearing and vision, low muscle tone and motor delays.

“Max wanted to be mobile," said his mom, Corin Chapman. "He had muscle control issues and he wasn’t crawling.”

Max’s occupational therapist, Jaime Ridgway, came across a program used at the University of Delaware called Go Baby Go. The program modifies toy ride-on cars for kids with disabilities. Ridgway decided to do something similar for Max.

Max’s vehicle started as a plastic race car. NCHS students in Don Whitman's technology club then took on the challenge of upgrading the little red car. Other students helped design shirts for Max's Miles Foundation and create the website.

"We did some research, worked with engineering students and pumped out ideas," said Whitman.

The students added safety rails, a seat belt, a handle for parents and a large red button on the steering wheel. When Max holds his hand to the button, the car scoots forward.

“The car helps him improve his core strength," said Ridgway. "He learned to hold his hands to the button instead of banging on it and he’s able to explore his world."

A month after getting the car, Max was crawling on his own.

Since then, the group has modified two more cars. Eight-year-old Gunner Cox has Down syndrome, which causes him to struggle with standing and supporting weight. A blue, battery-powered all-terrain vehicle was fitted with a triggered seat, raised handle bars and modified floor pedals. The car only moves when Gunner stands up, which helps strengthen his legs.

"I'm already signed up for next year's principles of engineering class with Whitman," said freshman Kate Zaroogian, who helped repair some safety issues on Gunner's car. "I love the things we learn in these classes."

Two-year-old Adyson Scherrer had a prolonged seizure at seven months that resulted in some visual impairments and delays in fine motor skills. She has a hard time pointing and tracking motion.

"Adyson's car only goes if she uses her finger and points into an ignition spot," said Whitman.

Max's Miles Foundation is in the process of creating two new cars for twins with cerebral palsy. The group is accepting donations of battery-powered cars and parts to use, such as umbrella strollers, therapy switches, harnesses and booster seats. Those interested in donating or having a car modified for their child can visit www.maxsmilesfoundation.org.

On Wednesday, the three children met at NCHS with their families to test the cars together.

"It's so cool to see how well the kids get around now," smiled sophomore Luke Jackson, who helped engineer specific parts for Adyson's car.

The children who formerly had trouble with mobility were zooming up and down the hallway.

Gunner clapped his hands and waved at his parents. Adyson stuck out her tongue in concentration as she poked her tiny index finger into the ignition. Max happily slapped the red button on his steering wheel, his sister Ellie skipping alongside him.

Those wondering whether the AAUP will sanction Illinois Wesleyan University for its handling of program changes will have to wait until fall.

IWU President Georgia Nugent said liberal arts and professional career preparation “are not in conflict with each other.”

A proposal to require Illinois public schools to give standardized tests three times during the next academic year has been put on pause to give educators and parents more time to weigh in, officials said Thursday.

More than a dozen community groups, fraternities and sororities presented nearly $80,000 in scholarship funds to African American students in the Bloomington-Normal area on Saturday.

The new esports camp at Illinois Wesleyan University for 10 to 14 year-olds is about more than playing games. There's a leadership component, too.

Illinois Wesleyan University President Georgia Nugent disputes a report critical of the university but a faculty member called the American Association of University Professors report a "vindication" of faculty concerns.

Watch now: Illinois State University to give students a choice: shot or test

As ISU moves toward a more normal college experience this fall, it announces planned policies on COVID-19 vaccinations.

The three-minute clip to the House of Pain song is dedicated to graduating seniors.

An Illinois Wesleyan University fraternity involved in a hazing incident in April has lost recognition and been suspended for three years.

Max Chapman, 2, watches in wonder as his motorized car maneuvers down the hallway at Normal Community High School. His sister, Ellie, 5, keeps watch on his steering.

Max Chapman, 2, gets encouragement from his mom, Corin, while he tries out a motorized car at Normal Community High School.