Wimbledon canceled for 1st time since WWII because of virus 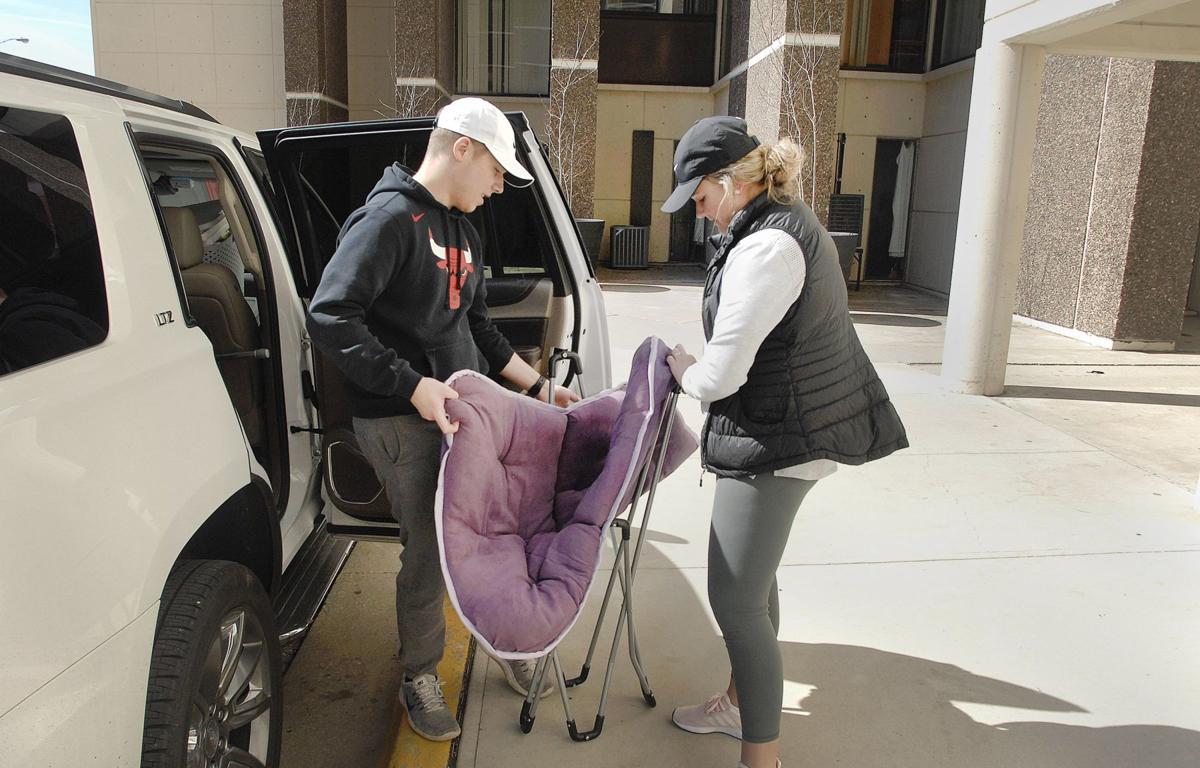 T.J. Murbach, an Illinois State University junior in business administration from Libertyville, helps his friend, Bianca Johnson, a business education freshman who also is from Libertyville, move her belongings out of Watterson Towers on Tuesday, March 17, 2020, in Normal. 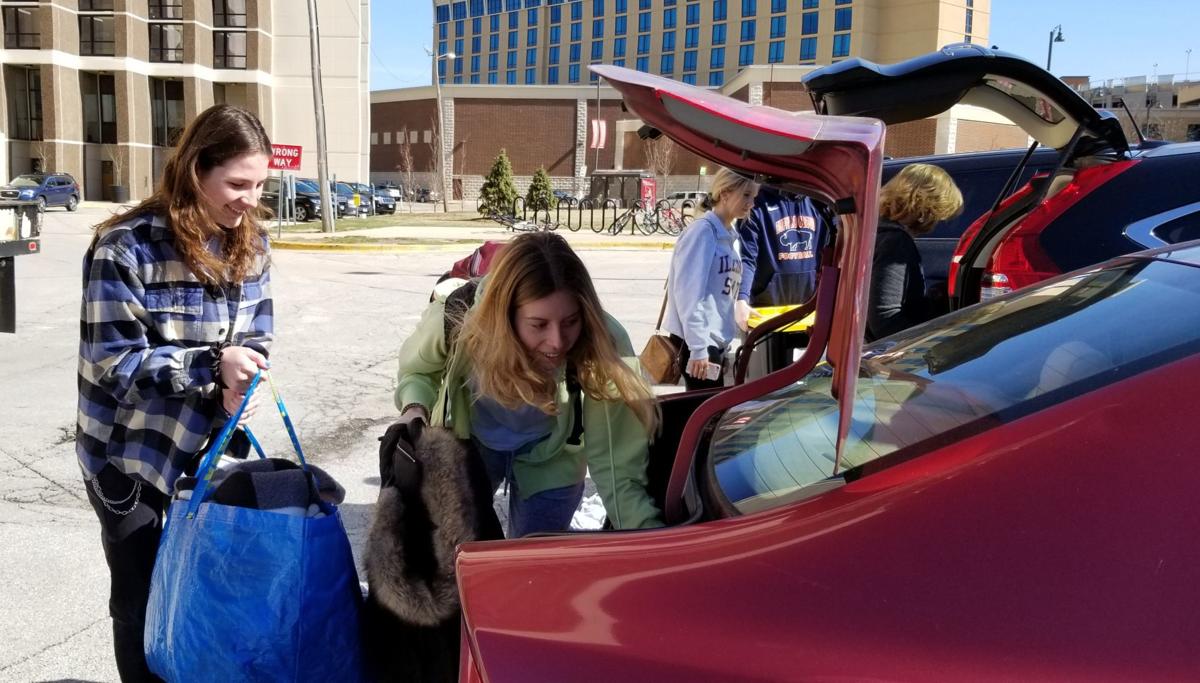 NORMAL — Illinois State University announced Tuesday it will continue with “alternative delivery” of classes though the end of the semester and finals week as a result of the coronavirus pandemic.

No decisions have been reached regarding spring commencement, according to ISU spokesman Eric Jome. The university has not received any reports of students, faculty or staff testing positive for the coronavirus.

“We’re trying to watch that very closely,” he said.

Illinois Wesleyan University said in a statement Tuesday evening that classes will resume Monday with remote instruction until at least March 27.

“We are preparing to announce instructional plans for March 30 and beyond by the end of the week,” according to the statement.

The University of Illinois system announced Tuesday there would be no commencement ceremonies on its three campuses this spring.

Initially, ISU extended spring break by one week and planned to switch from face-to-face instruction to online course and other alternative methods starting March 23 until at least April 12.

However, in a letter to students, faculty and staff, President Larry Dietz said Tuesday, “the fast-moving circumstances of the pandemic have caused us to extend that timeline.”

Students have been returning to residence halls since Sunday to retrieve books, clothing and other items they needed for what they initially thought might be a few weeks. Now, many will have to return to finish removing all of their belongings.

“We realize that’s some inconvenience,” said Jome. “This thing has moved so quickly.”

Among factors leading to the decision to end classes on campus through the end of the semester were the governor’s executive order closing eat-in restaurants and bars, actions by other universities and the Centers for Disease Control and Prevention recommending against gatherings of 50 or more people.

“They’re doing what is in their best interest to protect their students, and I know they are working very hard to come up with a remote teaching regimen that they can push out to their students,” said Normal Mayor Chris Koos. “ISU is a major economic driver in the Normal-Bloomington area, so that’s going to be hurtful, but I respect their decision.”

While the economic impact of students leaving the area is unknown, Patrick Hoban, CEO of the Bloomington-Normal Economic Development Council, said there will be an impact “because they are both the customers and workers for our local employers, especially those establishments closest to campus.”

With a student population of 21,000, campus is “like its own community” with more people than 42 percent of the municipalities in the state, he said.

“I don’t know if there’s ever been anything like this. … It’s understandable, though, because I would rather do this for a semester than see what would happen if everyone got sick, but it’s a hard pill to swallow,” Hoban said.

Koos said, “It’s going to be like summer in Normal that started two and a half months early. It will definitely have an impact on the community. The student population is a strong social and a strong economic presence in the community, and we will miss that.”

Jome said the university realizes the latest action and others are “incredibly disruptive to everybody’s lives.”

He added, “We’re really trying to be part of the larger public health initiative to flatten the curve” and slow the spread of COVID-19.

Freshman Laney Bennett, an English major from Rockford, said as she packed her car, “I think this has been blown out of proportion. … I paid a lot for this and I kind of want my money back.”

The message from Dietz said the university will “make appropriate adjustments to student accounts for prorated housing and dining costs.” More information is to be sent to students by March 31.

“I think there was really no choice,” said Carson Varner, a professor in the  finance, insurance and law department at ISU’s College of Business. “Caution is in order. Therefore, the university has done the right thing. I think they did the right thing initially by extending spring vacation for another week and then having two weeks (of teaching) online.

“We’ll continue teaching. I’ve taught courses online before. It won’t be as good. I want to talk to (the students). I want to see them but we will not be able to do that,” he said. “I am hoping to give them a good educational experience in the second half the semester. My colleagues are going crazy to do the same thing.”

“We’ve never faced anything like this,” said the professor. “I like to think that we’ve got a little humility insofar as sometimes we humans think we rule the world, but there are other forces beyond us. We’ll come together and work our way through this.”

Cindy Duenas, who was helping her son move belongings out of Watterson Towers Tuesday morning, said, “I think they have done a good job of having the students' health and best interests in mind.”

Luke Duenas, a freshman in criminal justices from Wonder Lake, said he was concerned about how his lab class in biology will be handled and said, “I’ll have to see how it plays out.”

Caitlin Walsh, a freshman in elementary education from Chicago, said the situation has been “pretty stressful.”

Her mother, Nancy Walsh, said, “I’m sad she doesn’t get the satisfaction of completing her freshman year.”

Although the official announcement wasn’t made until Tuesday afternoon, it was not entirely a surprise.

Dietz had indicated in an interview last week that in-person classes could be delayed through the end of the semester.

Based on the correspondence Varner has received from some of his students, he thinks they are coping with the change in the way their education is being delivered.

“I think they are feeling pretty good under the circumstances. They’re not going to get kicked out of school. They are going to get their credits. They are hoping for the best,” said Varner. “I’ve gotten some very nice remarks back from the students – ‘stay well, take care of yourself and we’re ready to go.’”

The university will make decisions on a case-by-case basis for students who must remain on campus because of extenuating circumstances. Watterson Dining Commons will provide to-go meals only beginning Wednesday.

Young America Realty is continuing to offer temporary, rent-free housing to students displaced by ISU’s decision to close university-operated housing, said Andy Netzler, president of Young America Realty. The company is not offering any changes to lease agreements at this time.

“It’s just so challenging right now,” said Netzler. “A lot of people have questions as to “what does this mean” and “am I being forced out.”

While he is uncertain how many students will choose to stay in Normal, Netzler said Young America offers great high-speed internet many students may find useful for completing online coursework. The company’s staff are also closely following CDC recommendations in terms of disinfecting and cleaning, which Netzler said varies among different types of businesses.

NORMAL — Illinois State University has announced it will continue "alternative delivery" of classes through the end of the semester and finals week.

McLean County has no confirmed cases of COVID-19, according to local, state officials

McLean County has no confirmed cases of COVID-19, the new strain of coronavirus that is spreading nationwide, the McLean County Health Department and Illinois Department of Public Health said Tuesday.

Voter turnout in Central Illinois for the primary election was "not bad" on Tuesday, considering coronavirus concerns and the number of people who had early voted, election authorities said.

BLOOMINGTON — A sales tax holiday, expedited jobless benefits and a delay in payment of local fees related to gambling machines are among acti…

Answering the 'how?: ISU student reflects on school closure

No arrest made after gunfire in east Bloomington on Tuesday

No arrests have been made after Bloomington police found a vehicle was struck by gunfire Tuesday night.

Heartland Community College has joined Illinois State University in moving all spring semester classes to an online format for the remainder of the term because of the coronavirus pandemic.

Seniors and other vulnerable populations in Bloomington-Normal now have reserved time in some of the most highly-shopped stores in the Twin Cities.

Counting every Illinois State University student in the 2020 census has been made more difficult by the campus moving to online-only classes because of the coronavirus pandemic. That could translate into a huge loss of money for the town of Normal.

T.J. Murbach, an Illinois State University junior in business administration from Libertyville, helps his friend, Bianca Johnson, a business education freshman who also is from Libertyville, move her belongings out of Watterson Towers on Tuesday, March 17, 2020, in Normal. 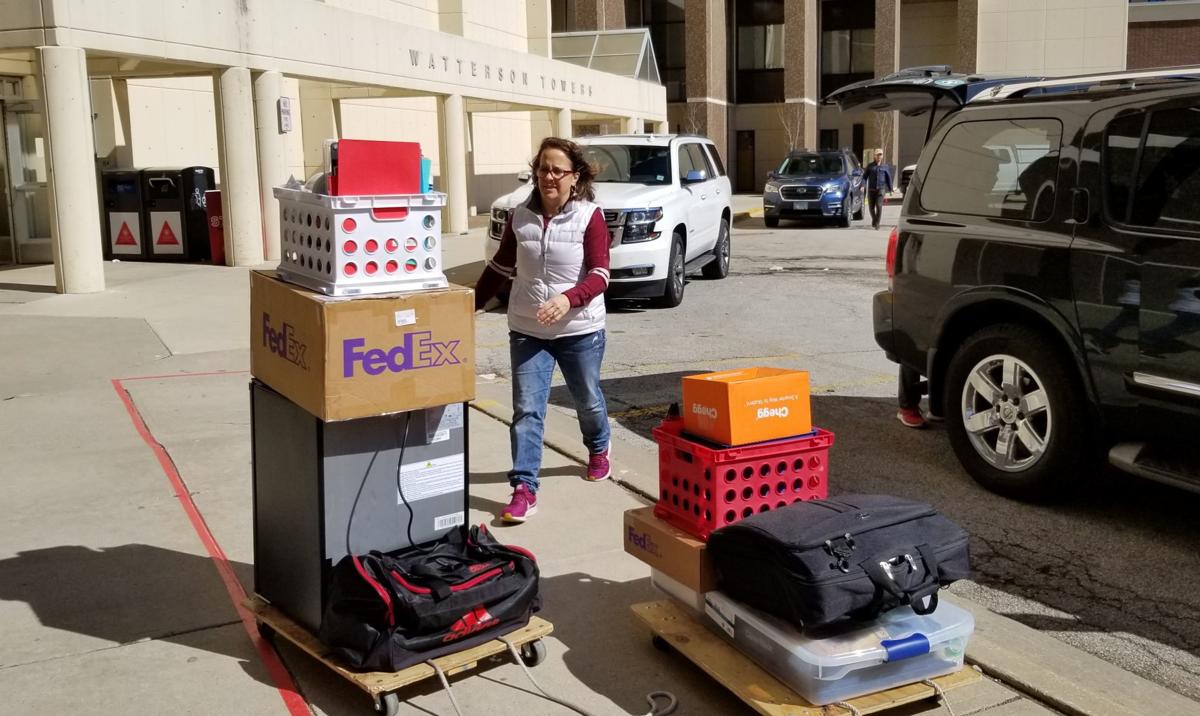 Cindy Duenas of Wonder Lake works with her son, Luke, a freshman at ISU, to load his belongings from Watterson Towers into their van on Tuesday, March 17, 2020. The university announced it is ending in-person classes for the rest of the semester. 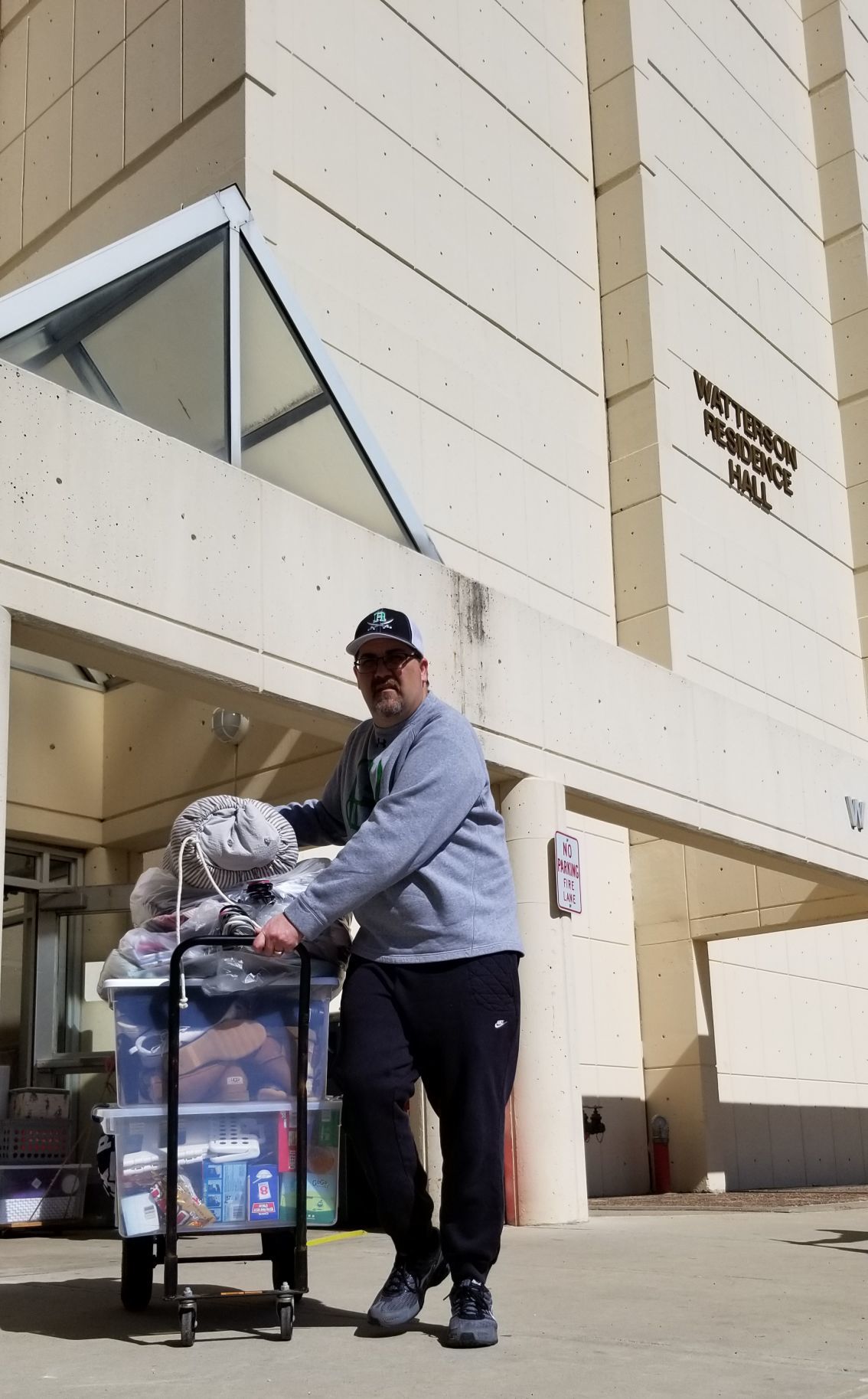 Matthew Walsh of Chicago rolls his freshman daughter Caitlyn's belongings to their van on Tuesday, March 17, 2020, from Illinois State University's Watterson Towers as she joined others in moving out with in-person classes ending for the semester.