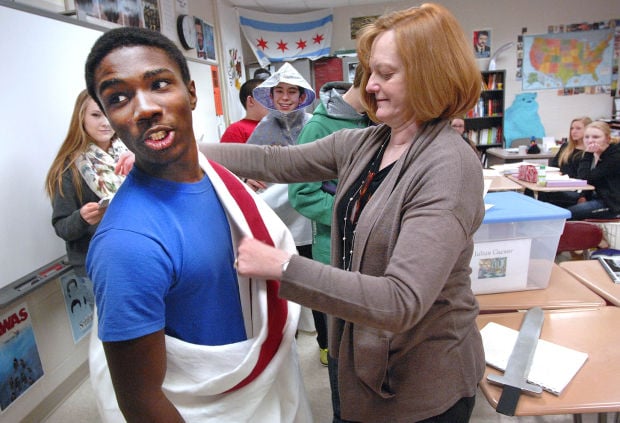 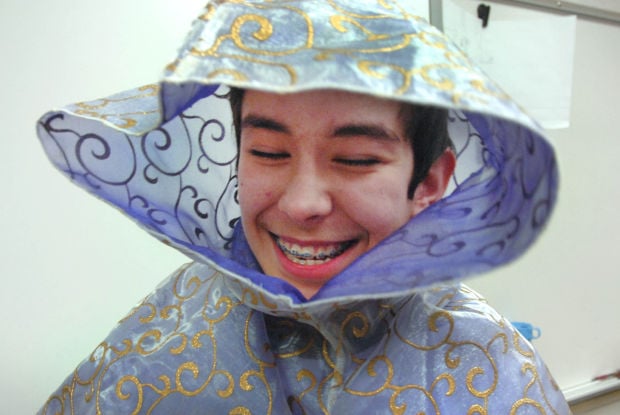 Noe Cornejo, playing Calpernia, laughs as he dresses up in his costume Thursday at Normal Community High School. 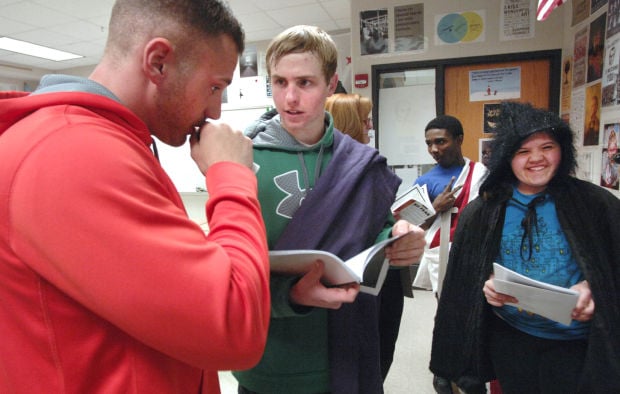 “I thought, 'Ugh! Shakespeare, again?'” she said Thursday before the start of her English II class at Normal Community High School. “That language … it was really hard for us to understand 'Romeo and Juliet' last year.”

But this year, teachers Barb Koski and Brad Bovenkerk found a way for the students to tune in more while studying "Julius Caesar," which they will resume after this week's spring break.

Last week, when Henrichs and her classmates started reading the Bard's play aloud, they did so wearing costumes that the teachers purchased with a $1,500 Beyond the Books educational foundation grant.

The play's two female characters, Portia (wife of Brutus, who was among Caesar's assassins), and Calpurnia, Caesar's wife, wore cuculluses, which are hoods with shoulder capes.

"When we are having different students read different parts each day, we know that the one with the purple robe is going to be Caesar. We know that Calpurnia is in purple, too, so we can see the connection of those characters," he said.

Koski ordered costumes for the three Shakespeare plays taught at the high school during ninth and 10th grades — "Julius Caesar," "Macbeth" and "Romeo and Juliet" — from a Wisconsin-based company that creates them specifically for the classroom.

"One of my goals was to have interesting costumes, but not so elaborate that it was going to take a lot of class time for the kids to get in and out of them," Koski said.

Portia's cucullus was adorned with a purple sparkled organza lining. As Noe Cornejo placed it over his head, he drew laughter from his classmates, saying, “It's hard to be manly-like, but I'm looking good. I'm feeling good.”

“I thought it was kind of fun,” said Henrichs, who by the second day had added an affected accent in reading her lines.

The lesson also involved some serious learning, ranging from Roman politics to jealousy and betrayal.

Bovenkerk had students recite lines they felt were key to a scene they had read aloud the day before. The scene centered on a soothsayer warning Caesar to beware of the Ides of March, the day on which the Roman dictator would be stabbed to death.

The rest of the class was asked to interpret the meaning of those lines and their importance.

For example, "Bid every noise be still; peace yet again," was the line chosen by Melody Brewster, who played Casca; and the class determined that in today's jargon that meant "shut up."

The teachers were hoping the addition of costumes would bring about exactly that kind of engagement by the students.

"First of all, it's just fun, and Shakespeare can be very intimidating to students just because of the language," Koski said. "The costumes are something we can do that draws them in and helps them make a connection to the story and how Shakespeare really does still ring true in the 21st century."

"It allows them to step out of being a high schooler a little bit and step into the role a little more. Some inhibitions can go away when you are already being silly by putting that costume on," Bovenkerk added. "Just like our soothsayer today doing that voice. That's going to make that line more memorable as opposed to me just reading it."

Bovenkerk, who has been teaching for about three years, can empathize with students' struggling to understand Shakespeare.

"I hated Shakespeare when I was in high school because I didn't get it," Bovenkerk said. "I felt like I didn't have the tools to get it. When you are just reading the lines and there is no acting, it's really difficult to understand sometimes.

"I think it's easy to shut off to Shakespeare because you don't know the rules he is writing by," he added. "Once you know those rules, that disconnect goes away a little bit."

Watch Now: Why do the vaccinated still fear COVID?

Watch Now: What to do when you witness an attack

Watch Now: What to do when you witness an attack

As ISU President Larry Dietz says farewell to graduates, he also is saying farewell to the university from which he will retire in less than two months.

Watch now: What will new ISU students be paying this fall?

In addition to setting rates for tuition fees, housing and meal plans, the board authorized seeking approval from the Illinois Board of Higher Education for a College of Engineering and gave the OK for two capital projects.

Once the Illinois State University board of trustees sets tuition rates for this fall's new students, those students will be guaranteed those rates through summer 2025.

Larry Dietz, who has been ISU president since March 2014, will retire June 30. The board is weeks away from naming who will take his place.

The Graduate Workers Union says there is "substantial movement" in its latest offer to the administration.

The literacy garden will be the Golden K Kiwanis' first “Signature Project,” proposed by the Promise Council, chosen from a dozen nonprofit applicants.

More than 100 educators participated in the Chick It Out program this year, bringing eggs to 33 schools, eight daycares and 24 home schools.

Because of the pandemic, commencement for this year’s class was split into two ceremonies, and members of the Class of 2020, who did not have a commencement last year, were invited back for a separate evening ceremony.

Noe Cornejo, playing Calpernia, laughs as he dresses up in his costume Thursday at Normal Community High School.