Here are a few excerpts from the public comment section of the District 87 school board meeting Wednesday, June 9, 2021.

BLOOMINGTON — Sex education legislation passed through the Illinois General Assembly this session, but lawmakers haven’t brought critical race theory to the floor — and Bloomington-Normal educators say it wouldn’t be part of their curriculum, anyway.

“First of all, it’s not part of any K-12 teaching and learning standards, so that’s one big reason” for why it’s not taught in McLean County schools, Superintendent Kristen Weikle said.

“It is not in the Illinois State Learning Standards,” which govern what is taught in Illinois schools, said Superintendent Barry Reilly.

“Nor has it ever been discussed to be part of our curriculum,” added Diane Wolf, assistant superintendent for curriculum and instruction for District 87.

Protesters at recent school board meetings equated critical race theory with efforts to ensure diversity, equity and inclusion in schools, but Wolf said the two things are not related.

Megan Zimmer, a parent of a District 87 student and two graduates, told the Unit 5 school board she believes critical race theory and diversity, equity and inclusion are the same thing.

“Being opposed to this stuff doesn’t mean we’re racist,” she said, though she did not speak specifically about her concerns regarding critical race theory.

In speaking against the theory at the same meeting, Kelly Andres, a Unit 5 parent, said: “I am a white lady, everybody can see that, but nobody that I am related to ever once owned anybody else. … I am not an oppressor. I never have been an oppressor. I always have been inclusive of all of my friends no matter their race or genre.”

'A crusade against American history'

The concept of critical race theory has sparked conversations across the country, especially among conservatives. Many local residents have expressed opposition to the theory, saying it is an effort to rewrite American history and persuade white people they are inherently racist.

In September, then-President Donald Trump took aim at critical race theory and the 1619 Project, a New York Times project that “aims to reframe the country’s history by placing the consequences of slavery and the contributions of black Americans at the very center of our national narrative.”

Trump called both “a crusade against American history” and “ideological poison that ... will destroy our country.”

According to the American Bar Association's "Human Rights" magazine, “CRT is not a diversity and inclusion ‘training’ but a practice of interrogating the role of race and racism in society that emerged in the legal academy and spread to other fields of scholarship.”

Bloomington-Normal educators said it’s unclear why members of the community believe critical race theory is part of K-12 curricula. However, it may stem from a comprehensive education bill signed by Gov. J.B. Pritzker in March. The Education and Workforce Equity Act, which was House Bill 2170, requires the creation of a 22-member Inclusive American History Commission to review education resources to reflect racial and ethnic diversity and include information on non-dominant cultures.

Educators across the region have expressed support for the expansion of social studies to be more inclusive of all Americans since this bill was passed.

Nathan Carpenter, a parent of children who will attend Unit 5, spoke in support of the district's efforts to include issues of racism, diversity and inclusion in the curriculum, saying, “if anything, we would like to see that work expanded.

"The only danger I hear regarding this topic are the calls to ban, censor and otherwise criminalize critical examinations of racism," he said at the Unit 5 meeting. "These are the types of calls we expect from authoritarian regimes, not from our friends and neighbors."

'We're proud of that diversity'

Both District 87 and Unit 5 have taken measures this year to advance their diversity, equity and equity practices, with teams dedicated to the review of curriculum and staffing, among other things. At Unit 5, that includes hiring Kristal Shelvin as the new director of diversity, equity and inclusion.

“Our school district is very diverse and we’re very proud of that diversity,” said Wolf. “There are 40 different languages spoken in our homes.”

In addition to diversity in language, race and ethnicity, the district also is diverse on a socioeconomic basis, Reilly said.

One way the district addressed socioeconomic diversity and equity was to provide internet access at home for students from low-income families, making sure “they had the same access as their peers who had high-speed internet access in their homes," Reilly said. That was about seven years ago.

“It’s not the same, and I think as an educator, and I know as a district, we want all of our students to feel welcome, safe, included, that they recognize people who might look like them or who may have had similar experiences, in the lessons and in the buildings that they come to every day. But they’re two very different things,” Weikle said.

Because critical race theory is an academic concept that addresses racism in legal systems and policy, it is taught at the university level.

Also sparking comments at recent meetings is comprehensive sex education that is LGBTQ-inclusive, as outlined in Senate Bill 818, which is awaiting the governor’s signature.

“We do not start planning for any curricular change until the legislation is signed, given to the Illinois State Board of Education and we receive guidance from them,” Wolf said.

Under the bill’s provisions, course materials will include education on and cannot reflect or promote bias on the basis of family structure, gender identity, sexual orientation or other factors.

Shannon Schwartz, who spoke at the Unit 5 school board meeting and identified herself as a nurse, said when she first read this bill, she was shocked, angry and sickened.

“The only thing schools should be including in their sexual education curriculum is male and female reproductive organs, puberty and the science of how reproduction works. That is it,” she said. When different types of sex are included as part of sex education, “That’s when this goes from being a school textbook or teaching to more like a child sexual grooming tool, and in my opinion, every pedophile’s dream.”

Becky Swan, who spoke at both districts, said a book titled “It’s Perfectly Normal” would be part of the curriculum and described it as having graphic images that were “a form of sexual harassment.”

But Wolf said of the book, “I’ve never seen that before,” and the bill says nothing about such a book. Reilly said, “It’s rare for the state to designate” a textbook. Rather, the state sets standards and school districts choose the materials, which are vetted and displayed.

Addi Weaver, 17, who will be a senior at Bloomington High School this fall, said, “I’ve never been taught critical race theory or comprehensive sex education” in District 87, but said the district does provide “culturally and emotionally responsible teaching” and tries to present “a curriculum that reflects the student body” and teaches “the true scope of American history.”

Weikle said she was “surprised that we had so many speaking specifically about certain topics that we’re not even teaching.”

Because Unit 5 does not teach comprehensive sex education to elementary students, this bill would not affect students in kindergarten through fifth grade.

“Students aren’t exposed to that until they take a health class in eighth grade and then again in high school,” Weikle said.

Senate Bill 818 includes sex education inclusive of LGBTQ health, and Weikle said a health task force made up of educators is working to create a health curriculum for Unit 5 high schools that is “more inclusive and affirming for people of all sexual orientations and gender identities.”

A task force for the junior high schools will begin meeting in the fall.

The story behind 12 unique street names in Bloomington-Normal

Here are a few excerpts from the public comment section of the District 87 school board meeting Wednesday, June 9, 2021.

More than 30 people signed up to speak during the public comments segment of the McLean County Unit 5 school board meeting. Many spoke in support or opposition to masks, sex education and social studies curriculum.

The buyer plans to update the buildings' units as they become vacant and increase their occupancy rate.

After childhood vaccine rates plummeted last year, health and school officials in Bloomington-Normal are reminding families now is the time to get those back-to-school immunizations and physicals scheduled.

Dark sky areas perfect for stargazing in the U.S.

Dark sky areas perfect for stargazing in the U.S.

The Moon could be hiding water on its rough, bumpy exterior

The Moon could be hiding water on its rough, bumpy exterior 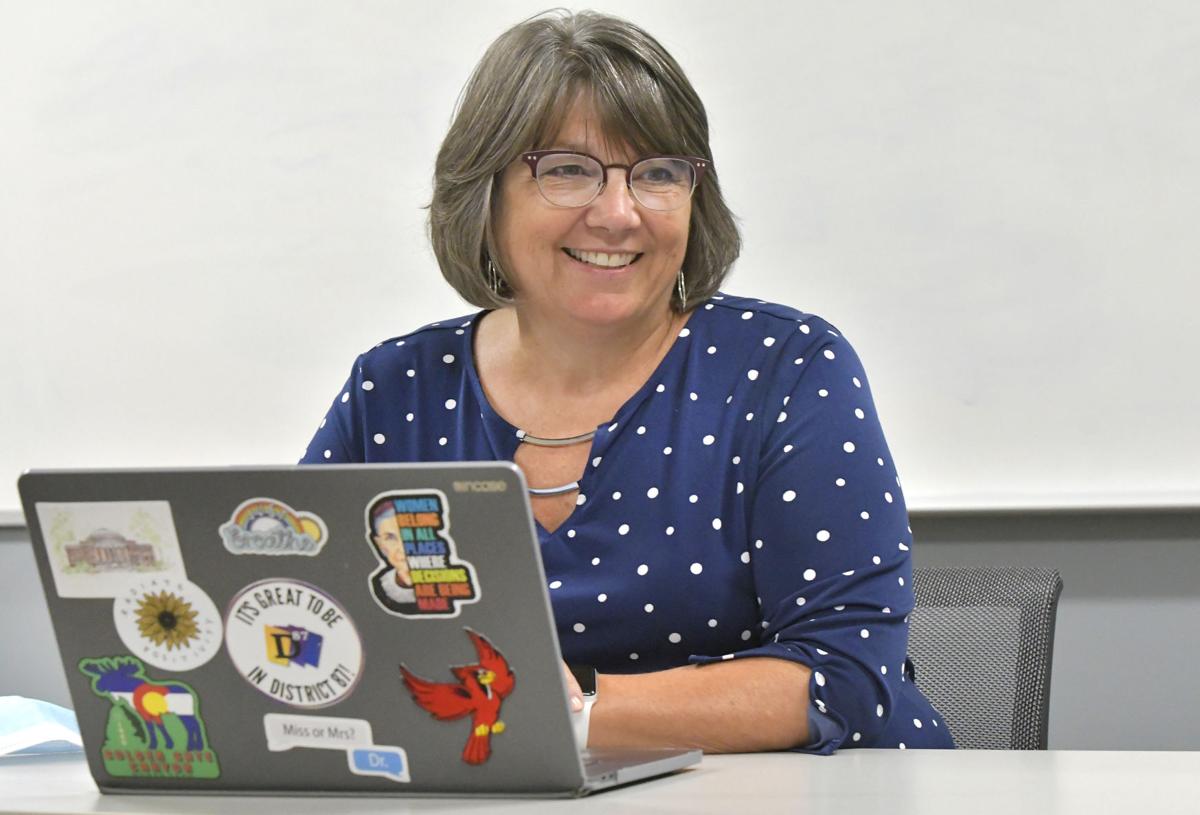 Diane Wolf, assistant superintendent of schools in District 87, is interviewed at the district offices on Monday. She said the district is working to meet standardized requirements set by the Illinois State Board of Education when it comes to teaching diversity and inclusion. 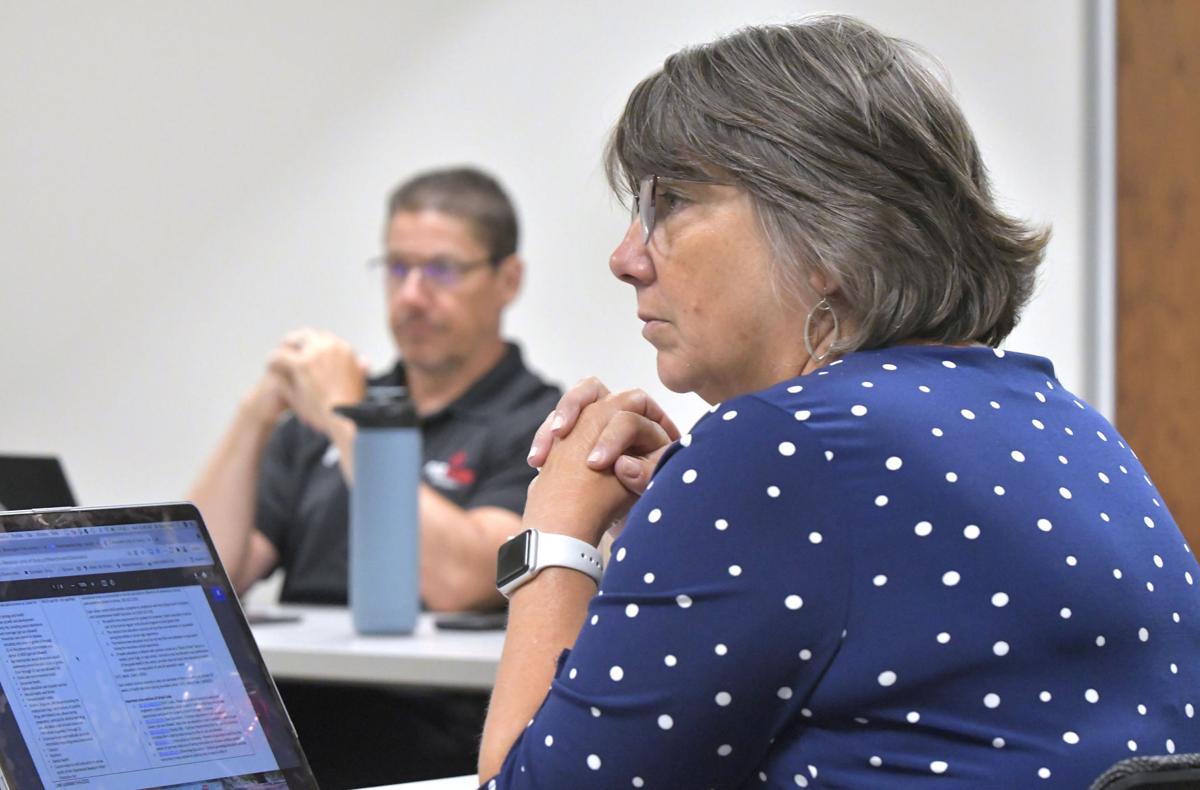 District 87 Superintendent Barry Reilly and Diane Wolf, assistant superintendent of schools in District 87, are working to create a transparent look into teaching curriculum for stakeholders across the district as they spoke during an interview at the district offices in Bloomington, Monday, June 22, 2021. 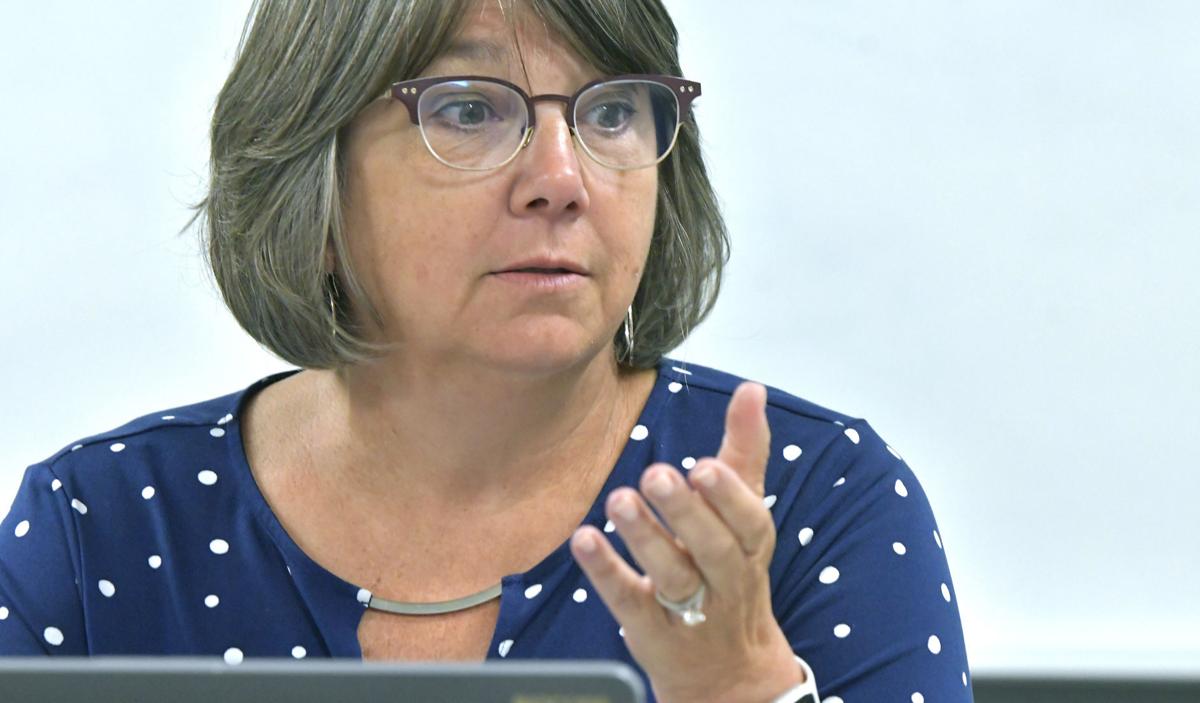 Diane Wolf, assistant superintendent of schools in District 87, said in an interview at the district offices on Monday that teachers aren't free to teach anything they want in Bloomington classrooms; the district follows guidelines set by the state. 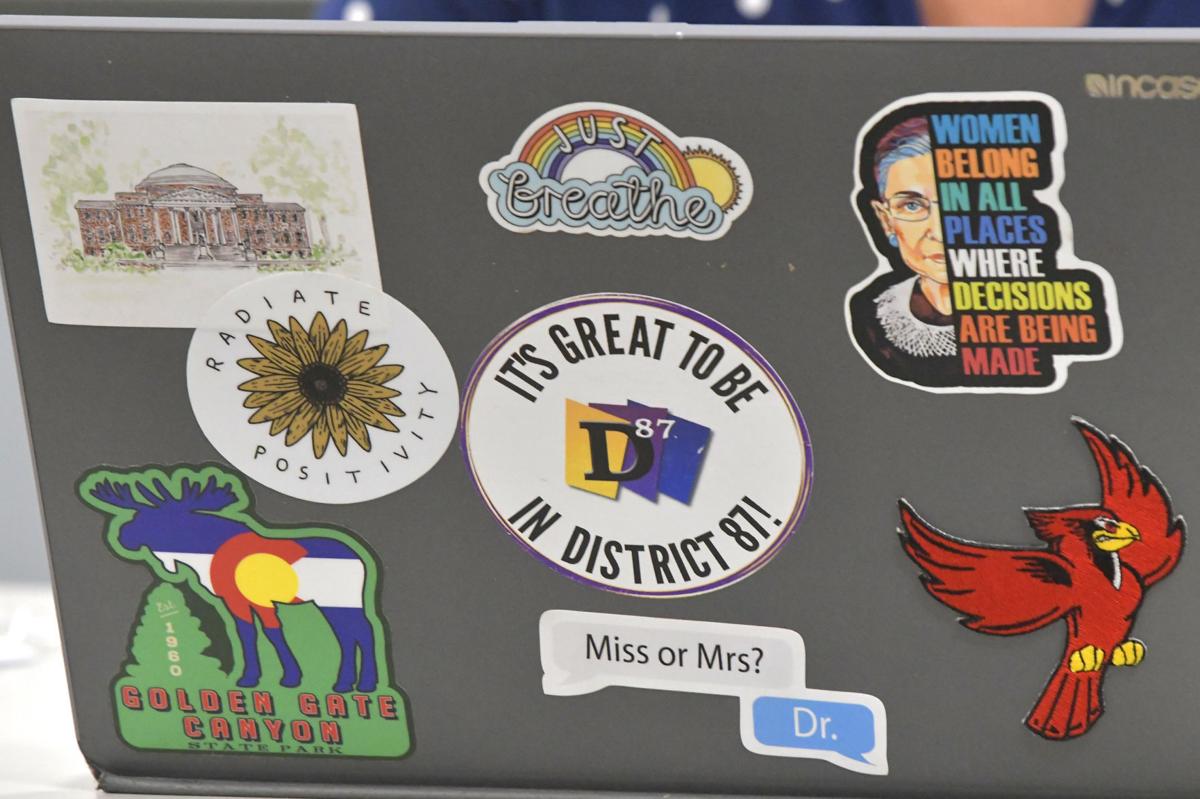 Stickers and logos on the laptop used by Diane Wolf, assistant superintendent of schools in District 87, give a small window of what makes her an important figure at the district offices in Bloomington. 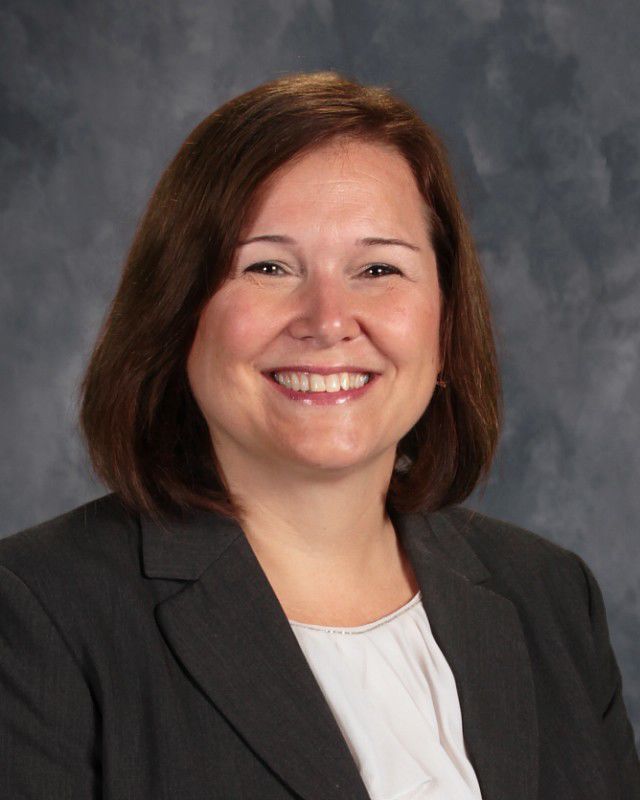