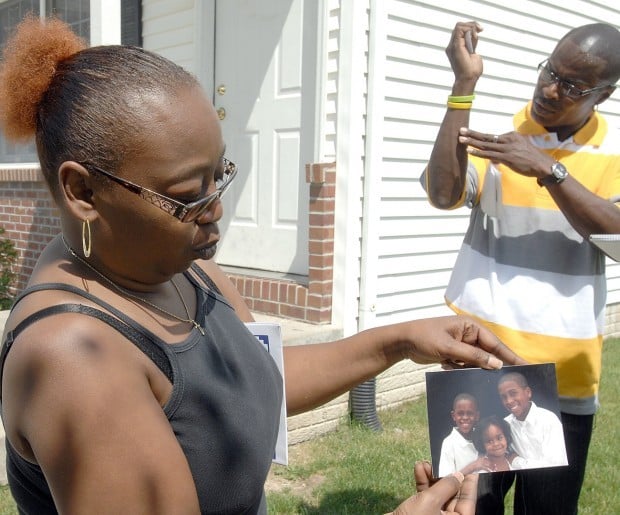 Sharleatha Morgan of Bloomington holds a photograph of her great nephew, Donnie Hampton, and his siblings as Andre Brooks of Chicago talks about Donnie's injuries and death, during a press conference Tuesday, June, 1, 2010, in Normal. (The Pantagraph/LORI ANN COOK-NEISLER) 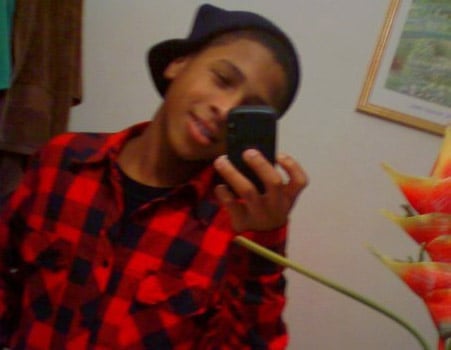 This undated image was posted among the profile photos on Donnie Hampton's Facebook account.
By Phyllis Coulter |

NORMAL — A family member of Donnie Hampton said Tuesday he thinks the 13-year-old died after he was attacked and had to defend himself.

But police, still waiting for official information on the Kingsley Junior High School student’s cause of death, disputed the claim and said “there is nothing to support” that conclusion.

Hampton collapsed at Kingsley on May 18 and died later that night at a suburban Chicago hospital.

“It was an act of violence,” said Hampton’s great-uncle, Andre Brooks of Chicago, at a news conference outside Hampton’s north Normal home.

The Cook County medical examiner’s office has not released an official report on the May 20 autopsy it performed on Hampton, but Brooks said his information came from a family member who was present at the autopsy — though he declined to identify the person. Brooks said preliminary information showed bruising, internal bleeding and injuries that would indicate violence.

But Normal Police Chief Kent Crutcher, who did not attend the news conference, disagreed with the assessment, saying “there is no evidence that leads us to believe” what Brooks is contending is true.

“There has been no (autopsy) report provided to us in a written or oral form,” said the chief. “There is nothing to support what they are saying (about a violent act).”

Brooks’ remarks also contradict statements released by Unit 5 school district officials after the incident, who said Hampton and some other boys were horsing around in a Kingsley restroom shortly before the teen collapsed.

Brooks said preliminary information indicated there was “multiple blunt-force trauma to the boy’s head and abdomen, and bruises were found on his legs and arms and chest area.” He said marks on the backs of his arms indicated he was defending himself.

He said the teen did not have any heart problems that would have contributed to his death.

Brooks provided no written documentation to media at the news conference. Hampton’s mother, Jasmine Brooks, was not in attendance.

A spokeswoman for the medical examiner’s office said no information will be released until further tests are done to determine the cause of death. Those tests could take an additional 11 weeks.

A spokeswoman for the school district also had no comment on Brooks’ conclusions.

“We are cooperating with the Normal police and are waiting for the official results of the autopsy report,” said Unit 5 spokeswoman Dayna Brown.

WATCH NOW: Myranda Wiggins: Making the most out of a virtual senior year

Sharleatha Morgan of Bloomington holds a photograph of her great nephew, Donnie Hampton, and his siblings as Andre Brooks of Chicago talks about Donnie's injuries and death, during a press conference Tuesday, June, 1, 2010, in Normal. (The Pantagraph/LORI ANN COOK-NEISLER)