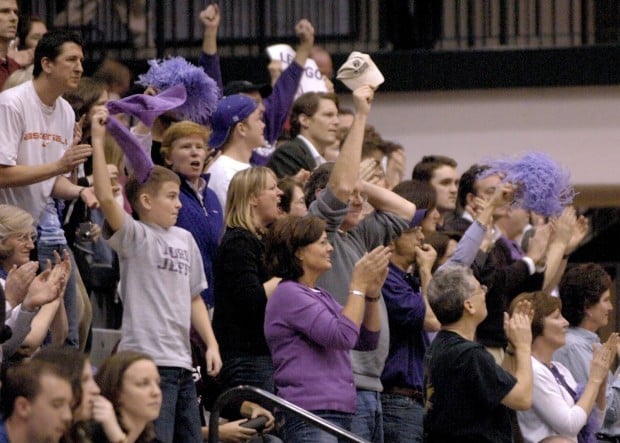 Amherst fans cheer during their game against Washington University on Friday, March 19, 2010, during the first half of an NCAA Division III Final Four game at Shirk Center in Bloomington. (The Pantagraph/CARLOS T. MIRANDA) 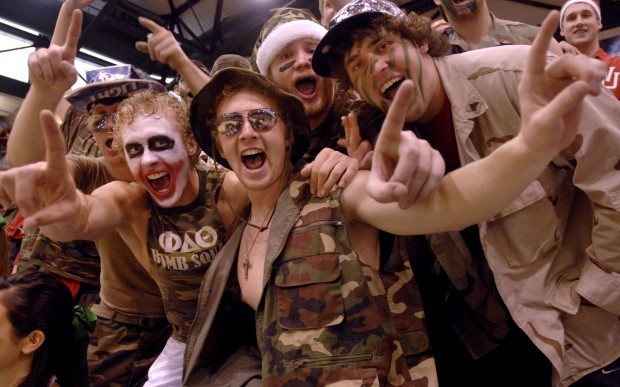 Washington University fans cheer during their game against Amherst on Friday, March 19, 2010, during the first half of a NCAA Division III Final Four game at Shirk Center in Bloomington. (The Pantagraph/CARLOS T. MIRANDA)
By Michele Steinbacher |

BLOOMINGTON — This week may be spring break at Illinois Wesleyan University, but the bleachers were full Friday at Shirk Center.

A mass of orange, red, yellow and purple shirts filled the stands as the Bloomington campus hosted the first night of NCAA Division III Final Four women’s basketball. The semifinals were Friday, and the championship and third-place games will be Saturday at the center.

It’s been an exciting journey to the top for fans from Hope College, Washington University, University of Rochester and Amherst College. And most people Friday were looking forward to seeing who takes the title.

“Last week we were down in St. Louis, too,” for the playoffs, said Janice Evans-Glaspie, who arrived in Bloomington with husband, son and mother to cheer on her daughter, senior Janice Evans, a forward for the Bears of Washington.

Mother and daughter stayed in touch Friday afternoon by texting.

“There’s no place like Hope. … But this will be good, too,” said Arvile Carroll, a longtime volunteer with the Hope athletics program.

“We’re huge women’s basketball fans,” she said, noting she was a little disappointed not to see IWU play in the Final Four but decided to bring the kids out for the excitement anyway.

“It’s important to me they see women’s basketball, as well as the men’s team,” she said.

Clare, Kate and Jack Moorman-Wolfe, 9, 7, and 6, respectively, weren’t quite set on which team they were backing Friday.

The Holy Trinity Grade School students and basketball fans smiled when the first game began, though.  “I like to play offense,” noted Clare.

Amherst fans cheer during their game against Washington University on Friday, March 19, 2010, during the first half of an NCAA Division III Final Four game at Shirk Center in Bloomington. (The Pantagraph/CARLOS T. MIRANDA)

Washington University fans cheer during their game against Amherst on Friday, March 19, 2010, during the first half of a NCAA Division III Final Four game at Shirk Center in Bloomington. (The Pantagraph/CARLOS T. MIRANDA)
© Copyright 2021 The Pantagraph, 205 N. Main St. Bloomington, IL | Terms of Use | Privacy Policy
Powered by BLOX Content Management System from TownNews.com.
You don't have any notifications.