NORMAL — Health care continued to be the most divisive issue in the race for U.S. Rep. Rodney Davis' seat at a Normal debate Monday.

Davis, a Taylorville Republican, and Democratic challenger Betsy Dirksen Londrigan of Springfield again tangled on pre-existing conditions during their fourth and final meeting before next Tuesday's election.

Davis, who voted for a proposal — the American Health Care Act — that Democrats claim would strip coverage from those with pre-existing conditions, denied that and said fact checks on the issue are flawed — including a Washington Post fact check about his tactics that Davis dismissed as partisan.

"I have fought to make sure there were layers upon layers of protections for pre-existing conditions. ... Our intent with that language was to make sure we protected (benefits)," he said. "The Congressional Budget Office said that our plan would lower premiums for individuals on the individual marketplace."

Londrigan said those statements don't mean care would be affordable for those with pre-existing conditions, and she said several organizations support her views, including multiple community newspapers, the AARP, multiple health organizations and the Congressional Budget Office.

Londrigan said she supports a public option for Medicare, paid for by users rather than the government, and securing the Affordable Care Act's subsidies long-term to provide insurers and hospitals needed financial stability.

Davis said he still supports what was in the AHCA, which passed the House but failed in the Senate, including protecting essential health benefits and keeping children on their parents' health insurance until they turn 26. He hit Londrigan for not ruling out the possibility of costly universal health care.

"In terms of impeachment, that's not why I'm going to Washington. ... The (Special Counsel Robert) Mueller investigation needs to play out," said Londrigan. She said health care, Social Security, tax reform and education are higher priorities for her.

"My plans are on the table," said Davis. "(Londrigan's donors) don't care about the farmers of Central Illinois. ... What they care about is removing Donald J. Trump from the White House, and that's exactly what's going to happen if my opponent and the Democrats take over Congress."

Davis said his main accomplishment is bringing economic growth to the 13th District, including through last year's tax reform law, that he said has boosted wages and reduced unemployment.

Londrigan responded that the tax law is a "scam" that benefited corporations and she's concerned about its effect on the federal deficit. She said she's worried Republicans will cut Social Security, Medicare and Medicaid in response, as Senate Majority Leader Mitch McConnell proposed last week.

Both candidates said they favor expanded background checks in response to shootings such as Saturday's at Pittsburgh's Tree of Life synagogue that killed 11 and injured nine others.

Londrigan said she'd like to see more detailed study of the causes of gun violence, while Davis said some blame lies with heated political rhetoric.

NORMAL — Democrats and Republicans both brought in heavy-hitters to stump for their 13th Congressional District candidates Monday. 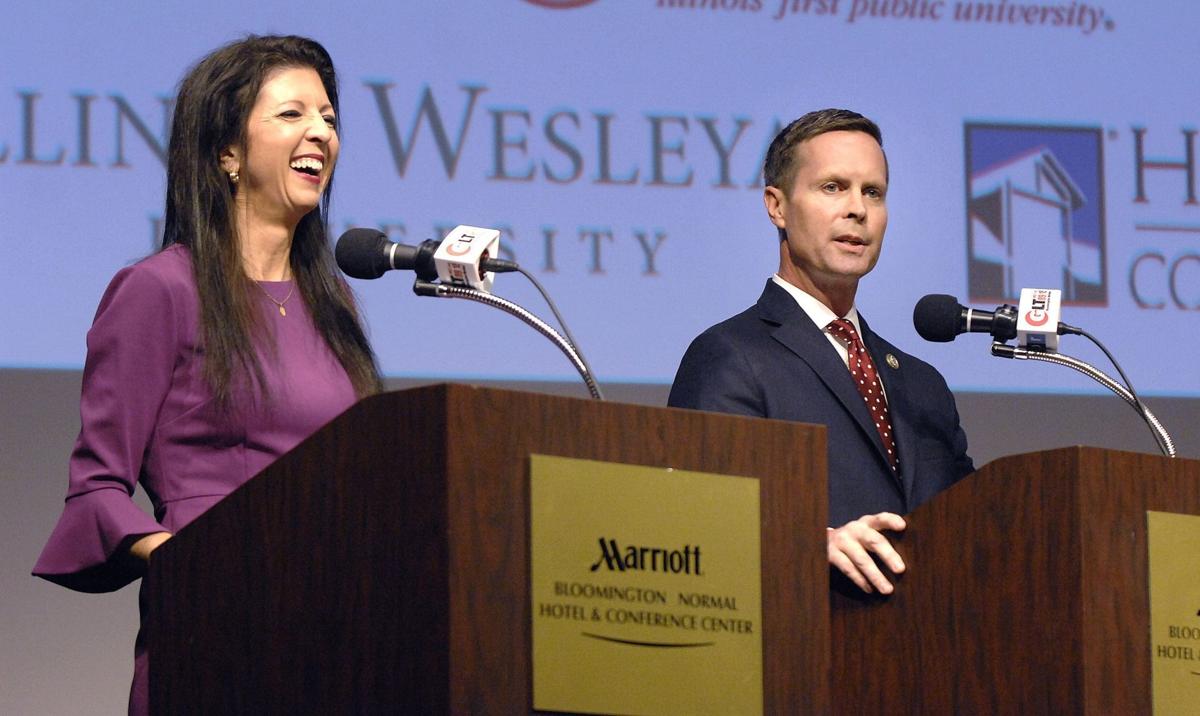 13th Congressional District challenger Betsy Dirksen Londrigan, D-Springfield, left, laughs as incumbent U.S. Rep. Rodney Davis, right, R-Taylorvillle, makes a point during a debate for the seat Monday, Oct. 29, 2018, at the Normal Theater in Normal. Davis was first elected to the seat in 2012. Recent polls show Davis to have a slim lead in the race but he could be vulnerable depending on turnout. 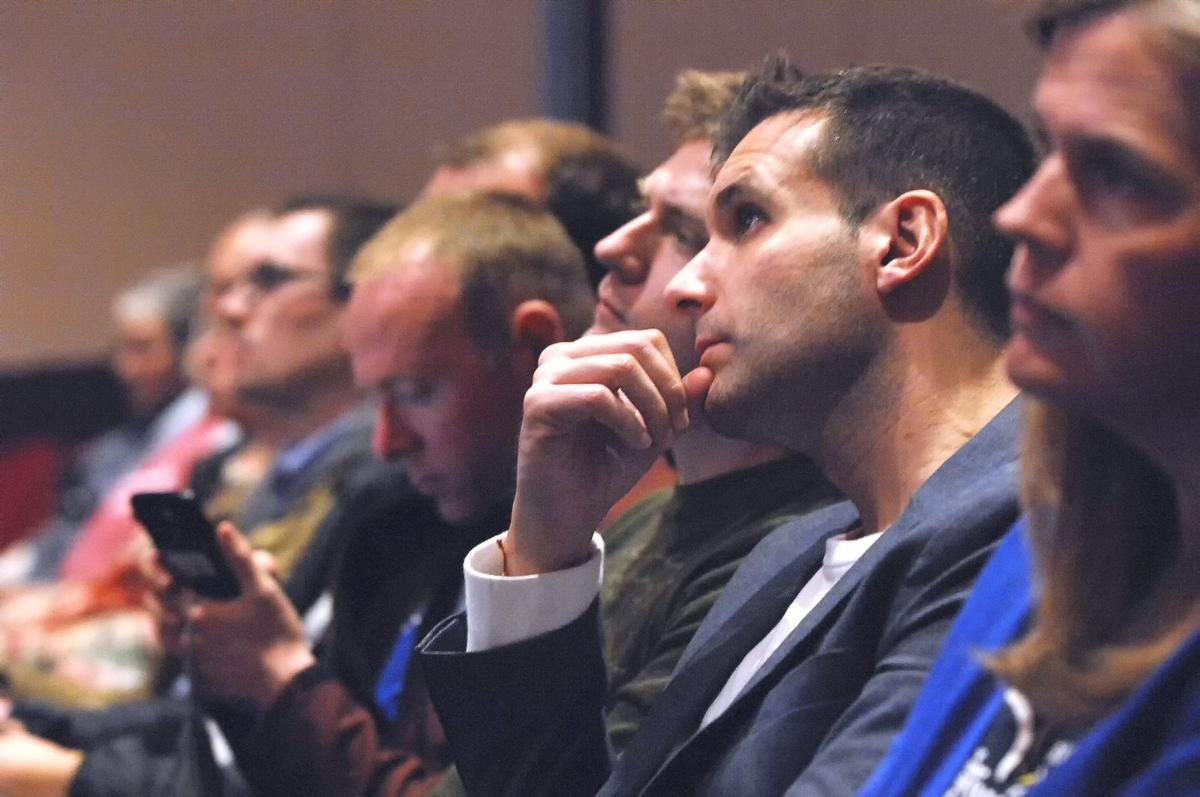 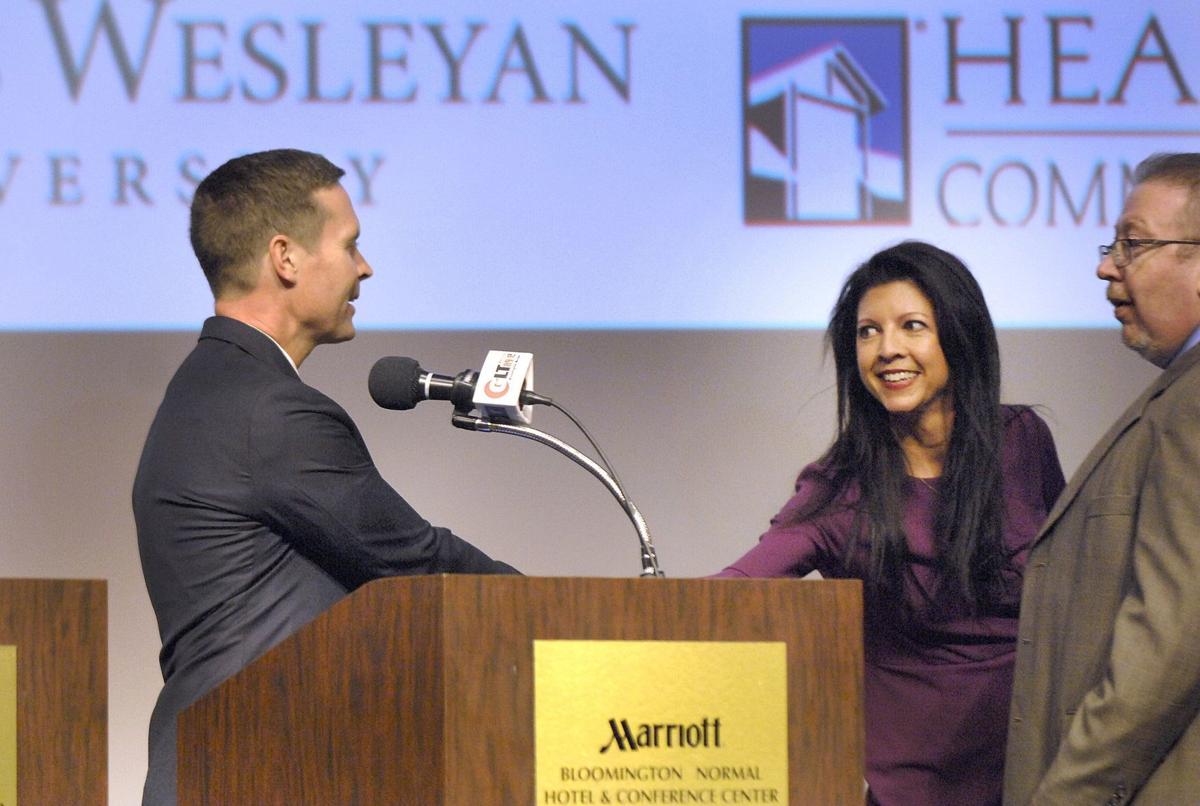 Incumbent U.S. Rep. Rodney Davis, left, R-Taylorvillle, shakes hands with challenger Betsy Dirksen Londrigan, D-Springfield, before their debate for the 13th District seat Monday, Oct. 29, 2018, at the Normal Theater in Normal. Davis was first elected to the seat in 2012. Recent polls show Davis to have a slim lead in the race but he could be vulnerable depending on turnout. 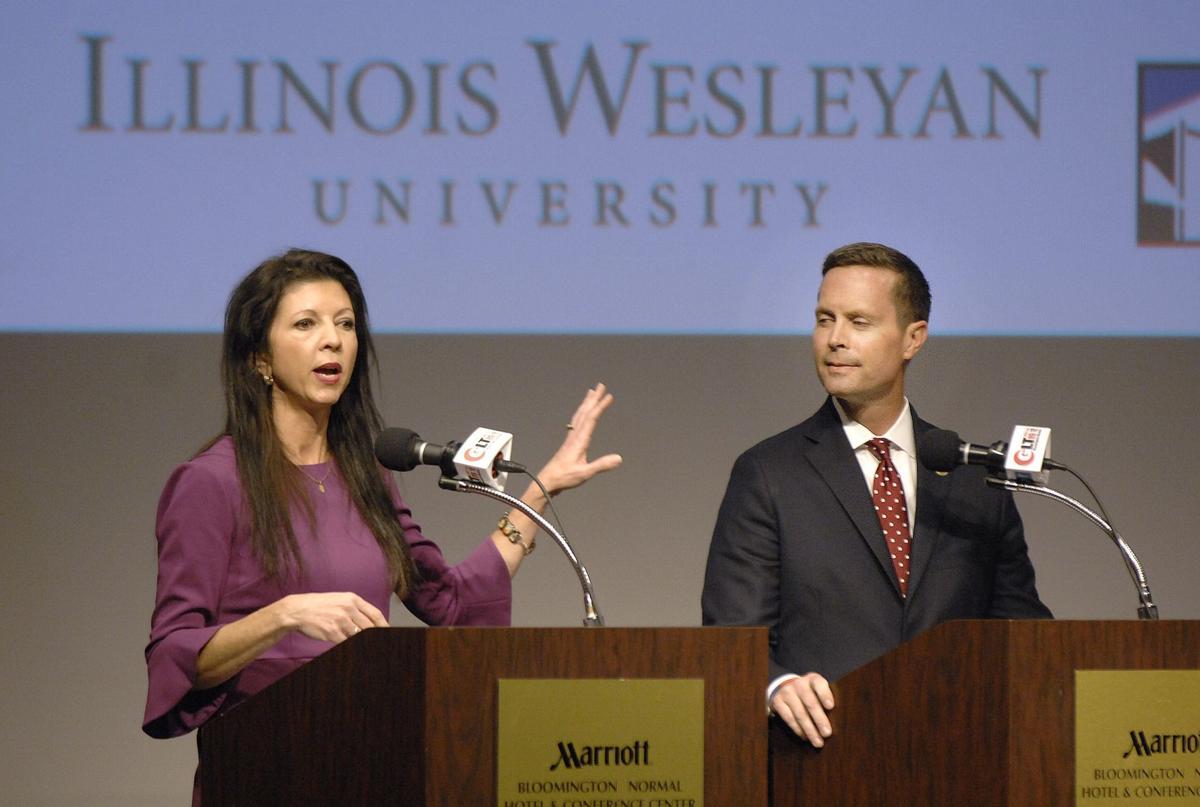 13th Congressional District challenger Betsy Dirksen Londrigan, D-Springfield, left, makes a point as incumbent U.S. Rep. Rodney Davis, right, R-Taylorvillle, listens during a debate for the seat, Monday at the Normal Theater. Davis was first elected to the seat in 2012. Recent polls show Davis to have a slim lead in the race but could be vulnerable depending on turnout.