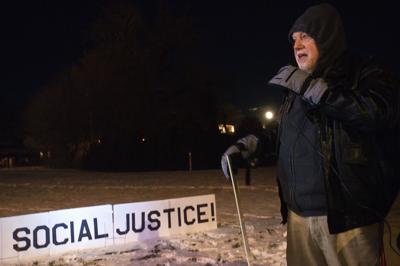 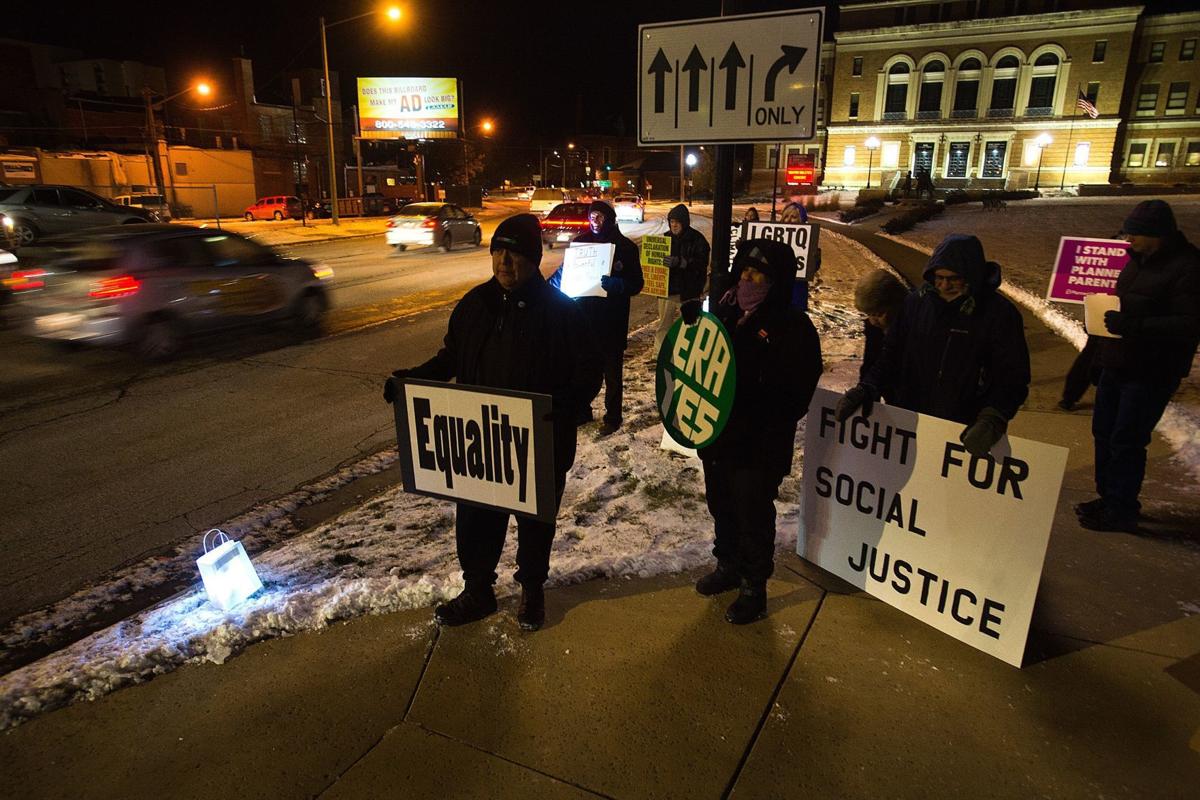 People stand along East Street during the 36th vigil, sponsored by Stand Up for Social Justice, on Tuesday, Nov. 12, 2019, outside the Bloomington Center for the Performing Arts. Stand Up for Social Justice, a coalition of politically progressive McLean County residents supported by several local organizations, is celebrating its third anniversary. 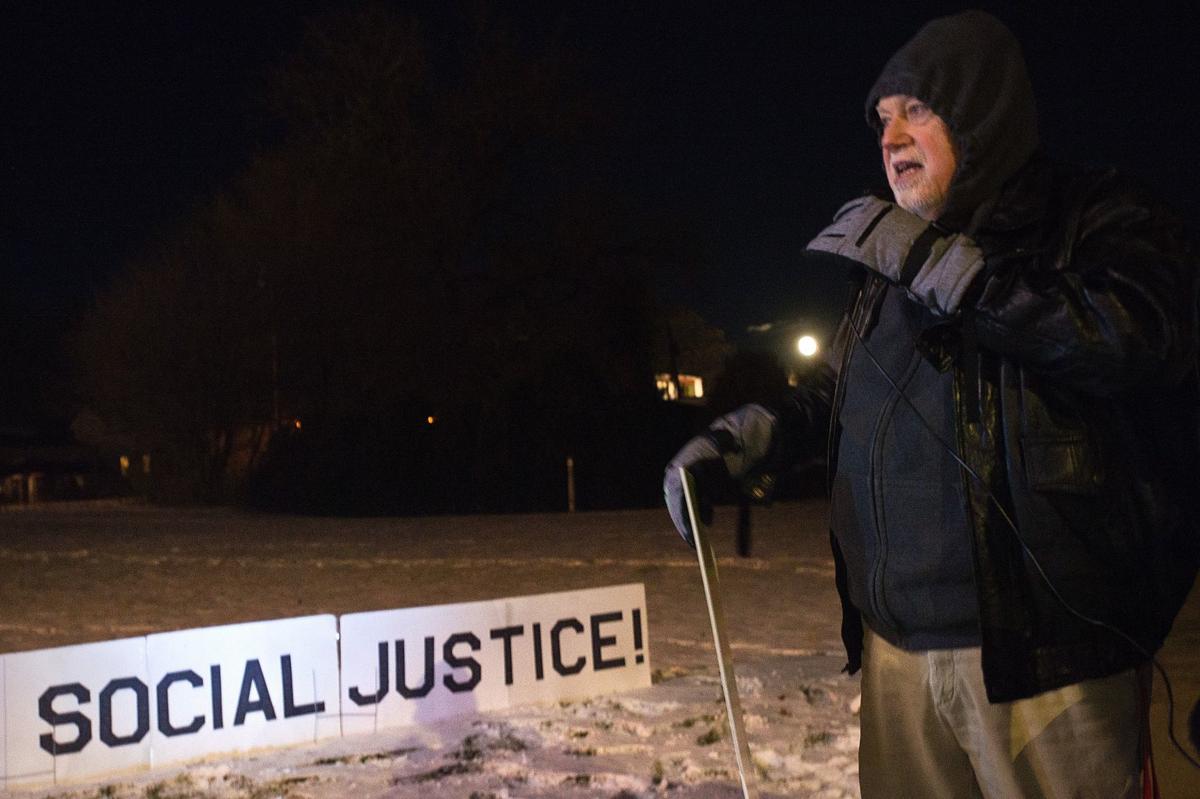 Bruce Lang of Bloomington speaks during a vigil sponsored by Stand Up for Social Justice on Tuesday, Nov. 12, 2019, outside the Bloomington Center for the Performing Arts.

BLOOMINGTON — Progressives in McLean County felt lost following the election of Donald Trump as president and could have decided to lay low for four years.

Instead, they chose to use their voice.

They formed Stand Up for Social Justice, a non-partisan coalition supported by several existing organizations, and began to host monthly "vigils," open to anyone, in front of the Bloomington Center for the Performing Arts (BCPA), 600 N. East St.

"During the (2016 presidential) campaign, there was so much hate speech," observed Linda Unterman of Bloomington, co-founder of the coalition with Julie Prandi of Bloomington. "We anticipated a need for a social justice voice."

Since then, Stand Up for Social Justice has hosted 36 vigils, with topics ranging from health care accessibility to immigrants' rights to support of sexual assault survivors. These are the people you see holding signs, speaking and sometimes chanting in front of the BCPA, generally at 5:30 p.m. the second Tuesday of each month but sometimes at noon during the winter.

Representatives of the coalition, while marking its third anniversary, have no plans to stop their vigils and their networking.

"Many of the issues we addressed, we could do the same ones and it would still be relevant, unfortunately," Unterman said.

Connie Beard, chair of the McLean County Republican Party, said "I'm a firm supporter of free speech" and she respects people who take time and energy to express themselves publicly and peacefully.

Following the election of Trump as president in November 2016, progressives were "lost," said coalition member Sara Holthaus Weidemier of Normal.

"There was shock, there was grieving," Mather recalled. "People were stunned. How could it happen?"

Progressives in McLean County were not an organized group. But some participated in the women's marches following the election and felt energized by those, Prandi said.

She and Unterman — with support from Not in Our Town, YWCA of McLean County, the Unitarian Universalist Church of Bloomington-Normal, New Covenant Community and ACLU of Central Illinois — decided to organize non-partisan vigils the second Tuesday of each month.

"We always stressed these were peaceful," Unterman said. "We wanted people to be willing to stand up and show themselves publicly but we didn't want it to be a yelling and screaming group."

The coalition publicly announces each vigil.

"No matter where you find yourself on the spectrum, if the subject matter is important to you, you are welcome," Weidemier said.

"We all felt it was important to focus on issues," Prandi said. "That's what brings people out."

With Trump's promise to dismantle the Affordable Care Act, several early vigils opposed that and addressed health care affordability. When Trump supported separating migrant children from their parents at the U.S.-Mexican border, the coalition rallied against that. When accusations of sexual abuse were made against Supreme Court nominee Brett Kavanaugh, coalition members rallied in support of sexual assault and abuse survivors.

"He (Trump) is undoing those social contracts with a lot of people in this country" and the coalition thinks that's worthy of conversation, Weidemier said.

"The most powerful part of our vigils is when people come up and share their stories," Unterman said. "When we had the rally on sexual violence and three or four people told their painful stories — and at least one had never told her story before — that was powerful."

In addition to sharing topical information and personal stories, the vigils generally include a "call to action" consisting of contact information for members of Congress or the state General Assembly to encourage people to pass along their perspectives on the issues and pending legislation.

Vigil attendance varies. "We have a core group of about 30 people but we had as many as over 200 at one of our DACA (Deferred Action for Childhood Arrivals)/Dreamers rallies," Unterman said.

"Occasionally, we get one or two people on the other side (politically) but they have been respectful," Unterman said. "I think we're getting more honks (from passing drivers), which I take as a positive."

But what has the coalition accomplished? Beard said that's difficult to answer.

"It's harder to judge the success and failure of standing and holding signs on a corner," Beard said. While others become aware of your beliefs, "the real value is getting people to act on those beliefs," she said.

"People are more willing to come out and speak," Weidemier said.

"We show up in person, in public," Unterman said. "We're not embarrassed by our views."

In doing so, coalition members said they'd like to think that they've been a part of the increasing interest in the political process in McLean County, which has included more Democrats running for public office in the past two years.

They plan to continue their vigils.

"We can't close that outlet for people who need to be heard," Weidemier said.

"We're not done in any way, shape or form," Mather said. "It's important to say 'We're here and this is what is.'"

A fourth Illinois resident, who had recently vaped and been hospitalized with a severe lung injury, has died but state officials aren't releasing his or her county of residence.

A University High School English and drama teacher, who lost to incumbent State Rep. Dan Brady in 2018, announced Monday his candidacy for a McLean County Board District 4 seat.

Protesters in Normal demand end to detention of immigrant children

More than 100 people gathered around Uptown Circle in Normal on Wednesday at a rally organized by People Against Caging Children to protest the separation of families and detention of children at the U.S.-Mexico border.

A multi-year, $30.5 million conversion of a former hospital building into a new approach to rural, outpatient health care is nearly complete in the LaSalle County city of Streator.

People stand along East Street during the 36th vigil, sponsored by Stand Up for Social Justice, on Tuesday, Nov. 12, 2019, outside the Bloomington Center for the Performing Arts. Stand Up for Social Justice, a coalition of politically progressive McLean County residents supported by several local organizations, is celebrating its third anniversary. 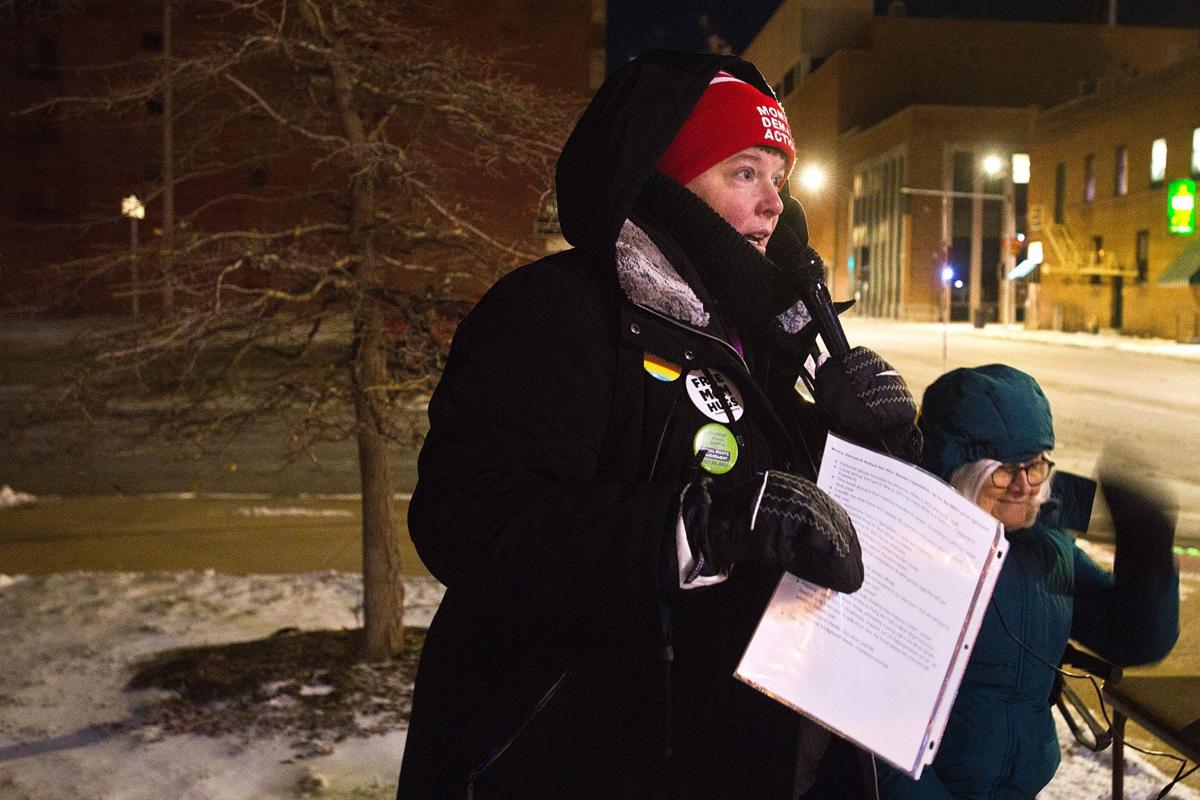 Sarah Breeden of Normal speaks to fellow participants in a vigil, sponsored by Stand Up for Social Justice, on Tuesday, Nov. 12, 2019, outside the Bloomington Center for the Performing Arts. Next to Breeden is Linda Unterman of Bloomington, a co-founder of the progressive group. 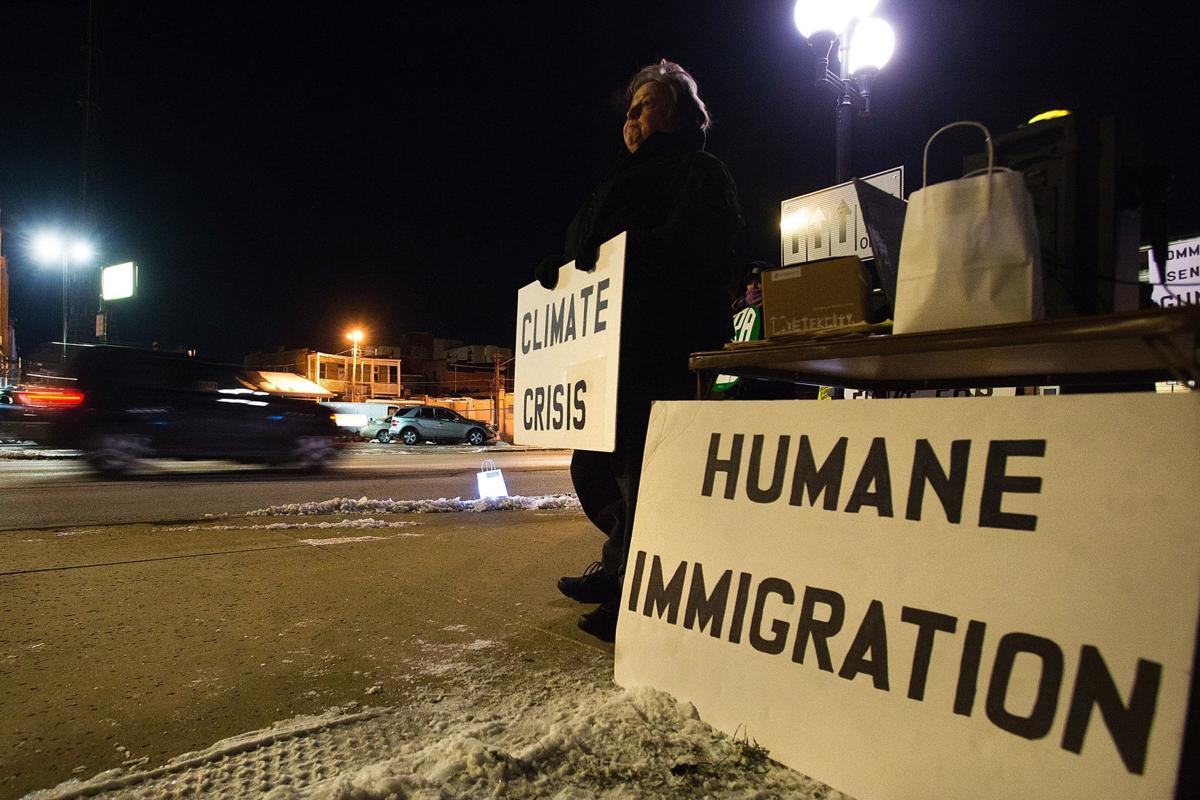 Sara Holthaus Weidemier of Normal stands along East Street during a vigil sponsored by Stand Up for Social Justice on Tuesday, Nov. 12, 2019, outside the Bloomington Center for the Performing Arts.

Bruce Lang of Bloomington speaks during a vigil sponsored by Stand Up for Social Justice on Tuesday, Nov. 12, 2019, outside the Bloomington Center for the Performing Arts. 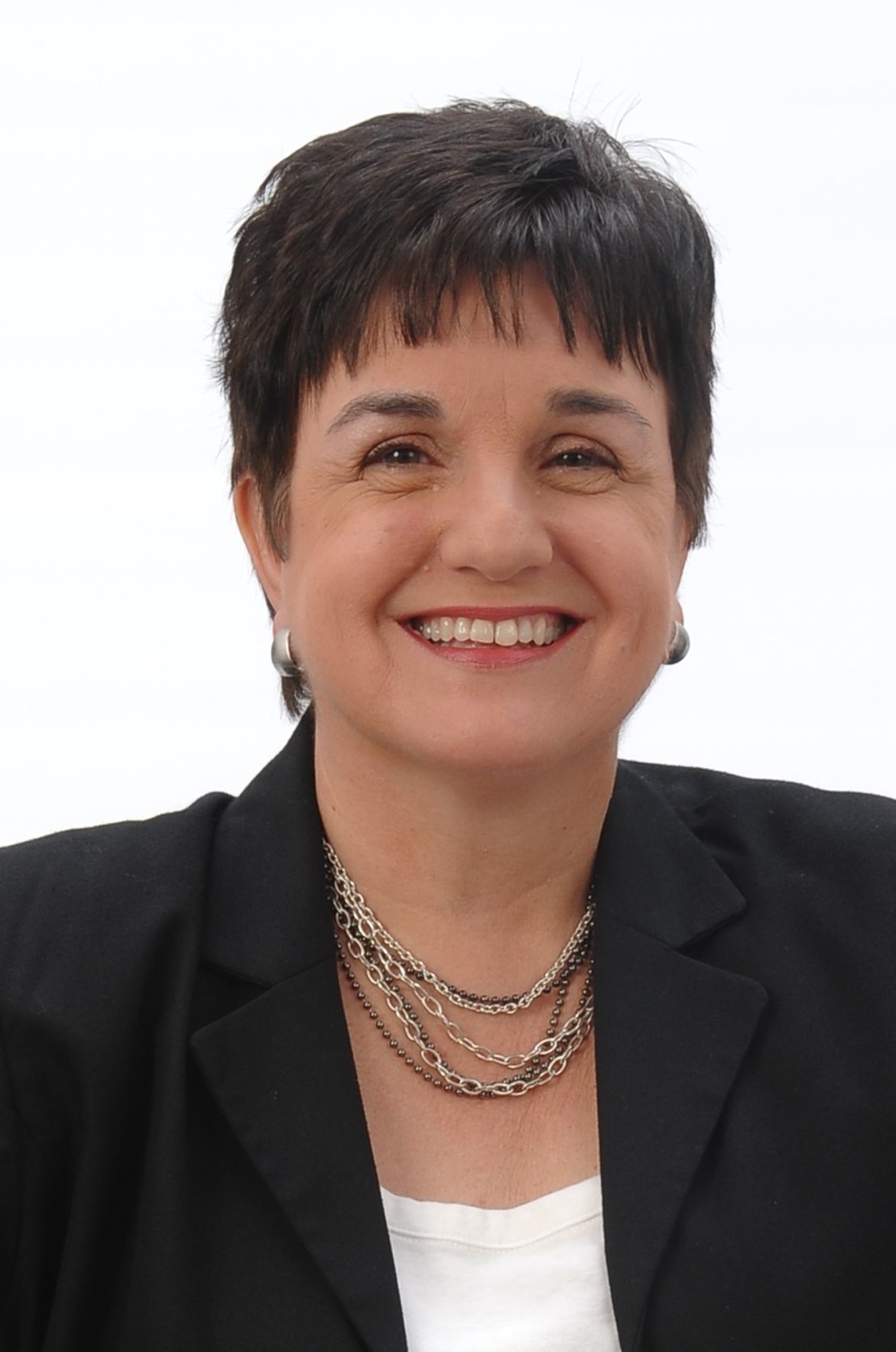