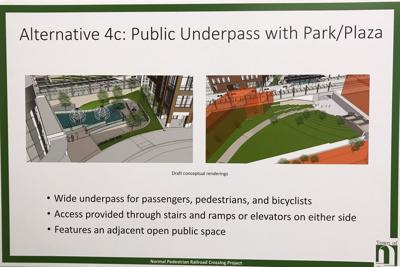 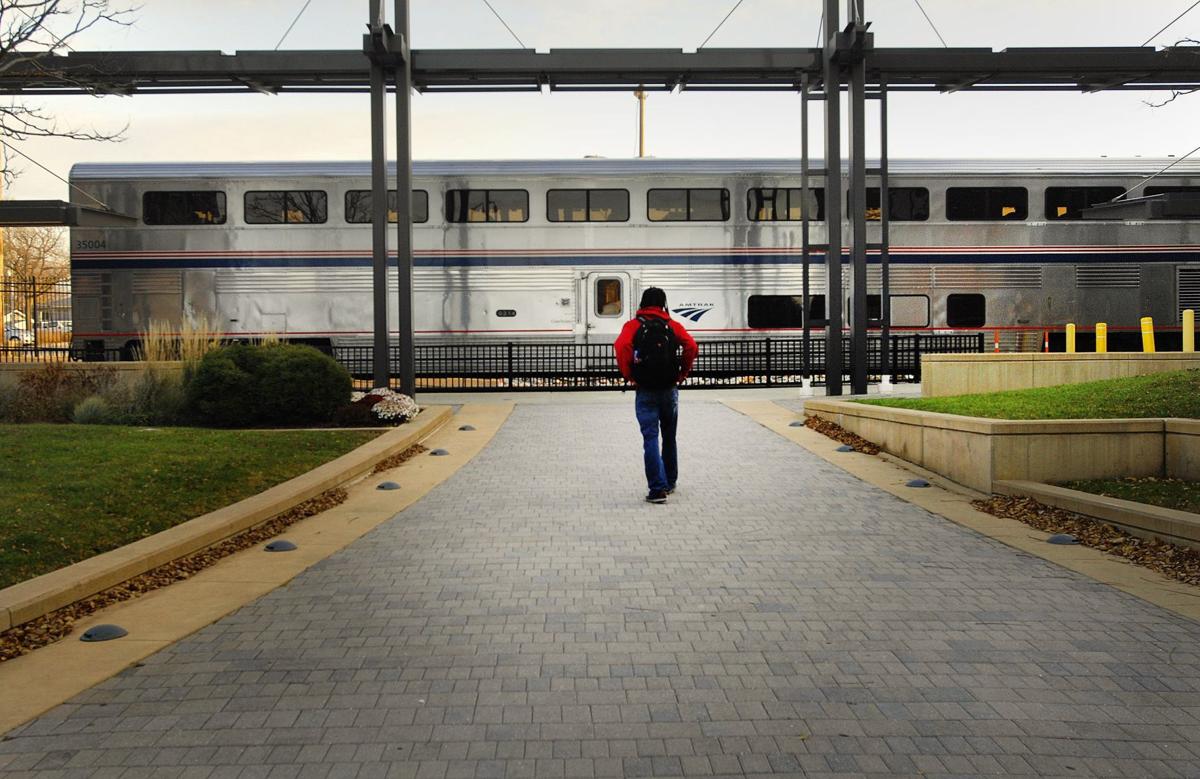 A pedestrian walks toward a waiting Amtrak train on Wednesday, Nov. 6, 2019, at Uptown Station in Normal after officials announced a $13 million federal grant for a pedestrian underpass below the Union Pacific tracks. 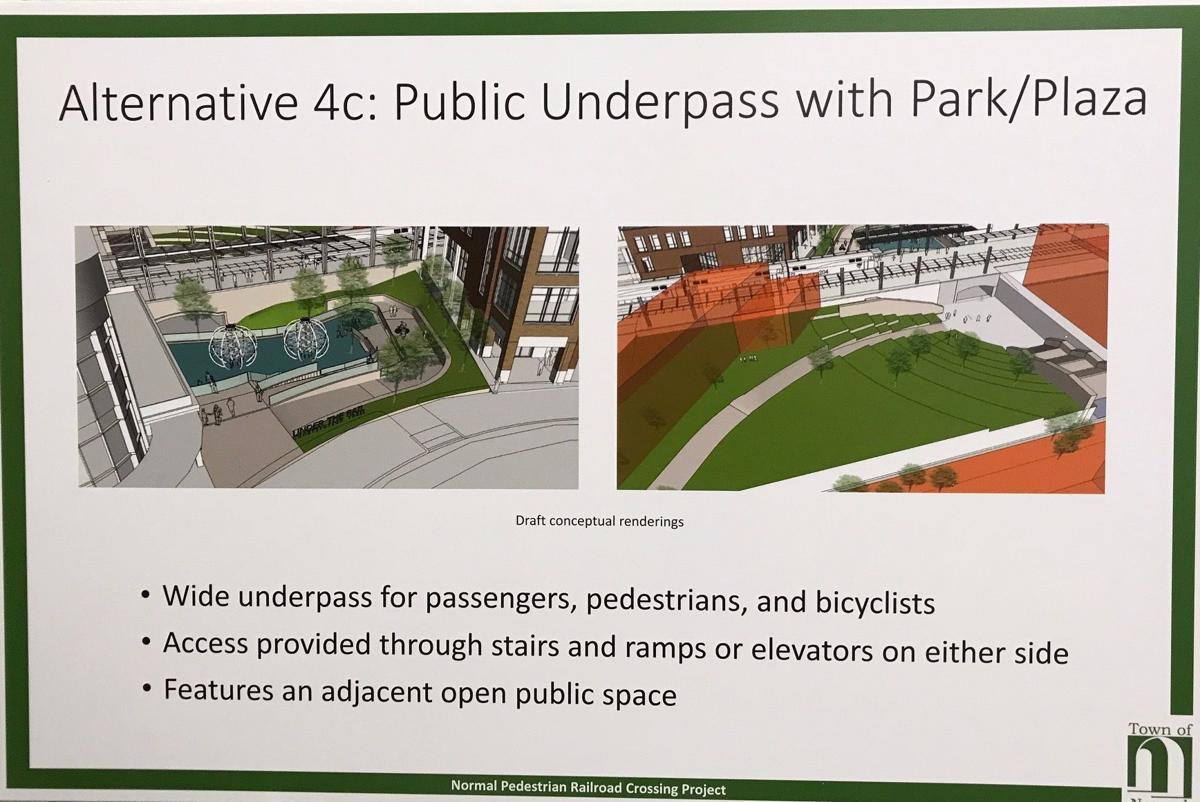 This graphic displayed Thursday at a public meeting at Uptown Station describes the advantages of a railroad underpass with park and plaza in uptown Normal.

NORMAL — Uptown Normal's railroad underpass is finally back on track.

The long-delayed underground connector from Uptown Station to points south of Union Pacific's tracks there will get a $13 million federal grant, officials announced Wednesday — short of $16 million the town requested, but enough to kickstart the project for completion as soon as 2022.

"We're incredibly happy that out of an incredibly competitive grant system we were awarded. ... We've got a lot of internal work to do now," said Normal Mayor Chris Koos. "People think of this as a place people can walk down a flight of stairs under the railroad tracks and come out, but it's much more."

Koos said the town will now begin final design work for the underpass, to take a year and a half, with a year-long construction process to follow. The town may look for additional state funding to get the project done.

Officials rejected an overpass project that also had federal funding lined up in 2015 to pursue an underpass, which could be more accessible to pedestrians and bicyclists and allow uptown to expand to the south side of the tracks.

The grant comes from the U.S. Department of Transportation’s BUILD — Better Utilizing Investments to Leverage Development — program, which Koos noted is "specifically for innovative projects that solve problems and drive economic development."

The town hopes to bring housing, a grocery store and a new Normal Public Library to the area south of the tracks as a new "Uptown South" district. Koos said the grant represents "one major hurdle that's removed" for those plans.

"We've heard from people who wanted to live in uptown but couldn't afford the class A apartment space we have now. ... This could be a mix of market-rate and subsidized housing, more accessible housing," he said. "We'd like to see an urban grocery store. ... As residential density increases, there'll be a need for that amenity."

He noted the underpass will also help those getting to Uptown Station's south platform, which became active in 2018.

Koos thanked U.S. Sens. Dick Durbin and Tammy Duckworth and U.S. Reps. Darin LaHood and Rodney Davis for their work securing the money. He said McLean County officials lobbying for the underpass during their annual "One Voice" trips to Washington, D.C., also helped.

"We had a mix of government, education, business and banking community people who came to Washington two or three times and collectively said, 'This is an important project for our community,'" said Koos. "The offices of those four elected officials worked together hand-in-hand to move this forward with the Department of Transportation. I think that sent a strong message."

The town previously paid a consultant $1.4 million to complete a feasibility study and preliminary design of the structure. Leaders affirmed their preference for an underpass as part of that process.

Davis said the grant "is a huge win not only for the development of uptown Normal, but for the citizens of Normal." LaHood called it "extraordinary news for the town of Normal, the local economy, and the future of infrastructure in McLean County.”

Eric Jome, director of media relations for Illinois State University, said the underpass could improve pedestrian safety, including for students.

Maria Nagle contributed to this report.

Normal library still set for 'Uptown South,' but years away

As Bloomington officials consider where a future library building may fit into downtown redevelopment, town leaders remain comfortable with a new Normal Public Library at the core of the proposed "Uptown South" — even with the library "bursting."

BLOOMINGTON — McLean County officials will head to the nation's capital next month to ask for help with four big community projects.

NORMAL — Mayors Chris Koos of Normal and Tari Renner of Bloomington are heading to Washington, D.C., Tuesday to lobby for two public transport…

NORMAL — A pedestrian has died after being struck by a vehicle while crossing Veterans Parkway at Fort Jesse Road, Normal police said Wednesda…

The Normal City Council will meet to discuss the next step in the construction of uptown Normal’s railroad underpass prior to meeting in regular session Monday night.

NORMAL — A proposed $24 million underpass project in uptown Normal could be finished by January 2021 and, despite the promise of a federal gra…

NORMAL — The look of uptown Normal will continue to change in the coming years, based on actions by the Normal Town Council this year.

A pedestrian walks toward a waiting Amtrak train on Wednesday, Nov. 6, 2019, at Uptown Station in Normal after officials announced a $13 million federal grant for a pedestrian underpass below the Union Pacific tracks. 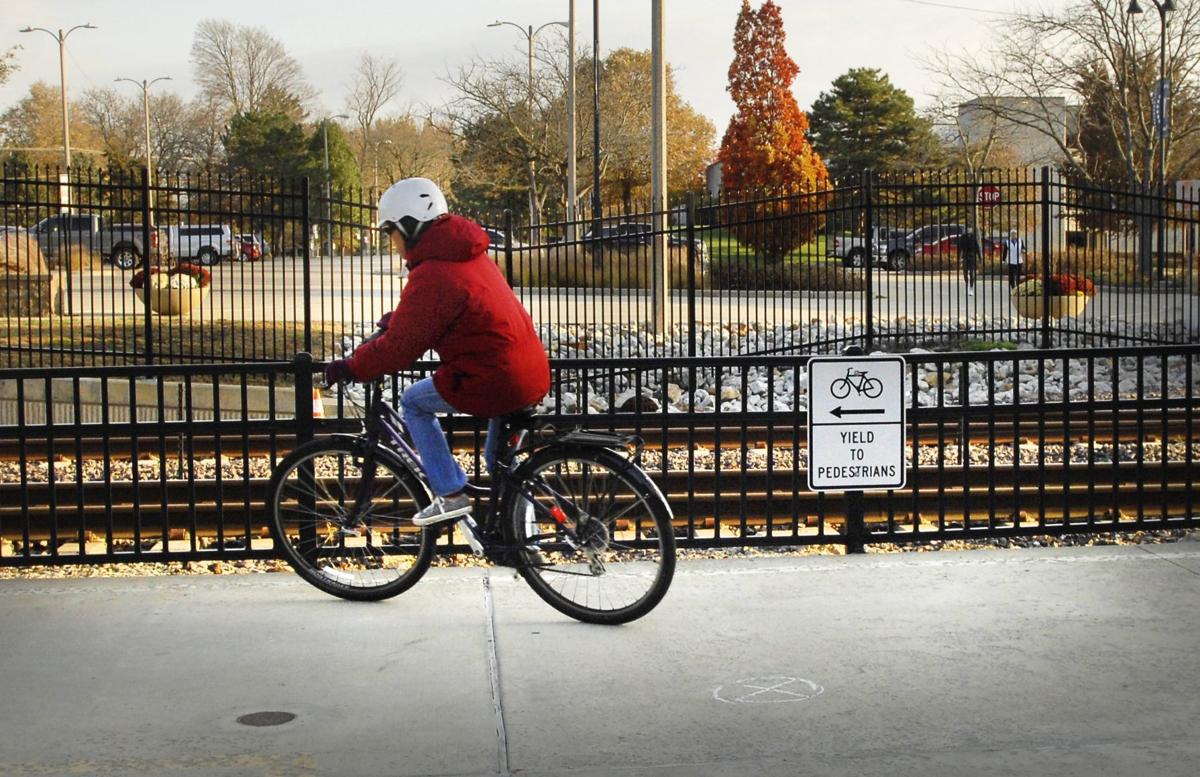 A bicyclist will soon have an easier time crossing the railroad tracks at Uptown Station in Normal after officials announced a $13 million federal grant to go toward a pedestrian tunnel below the thoroughfare. 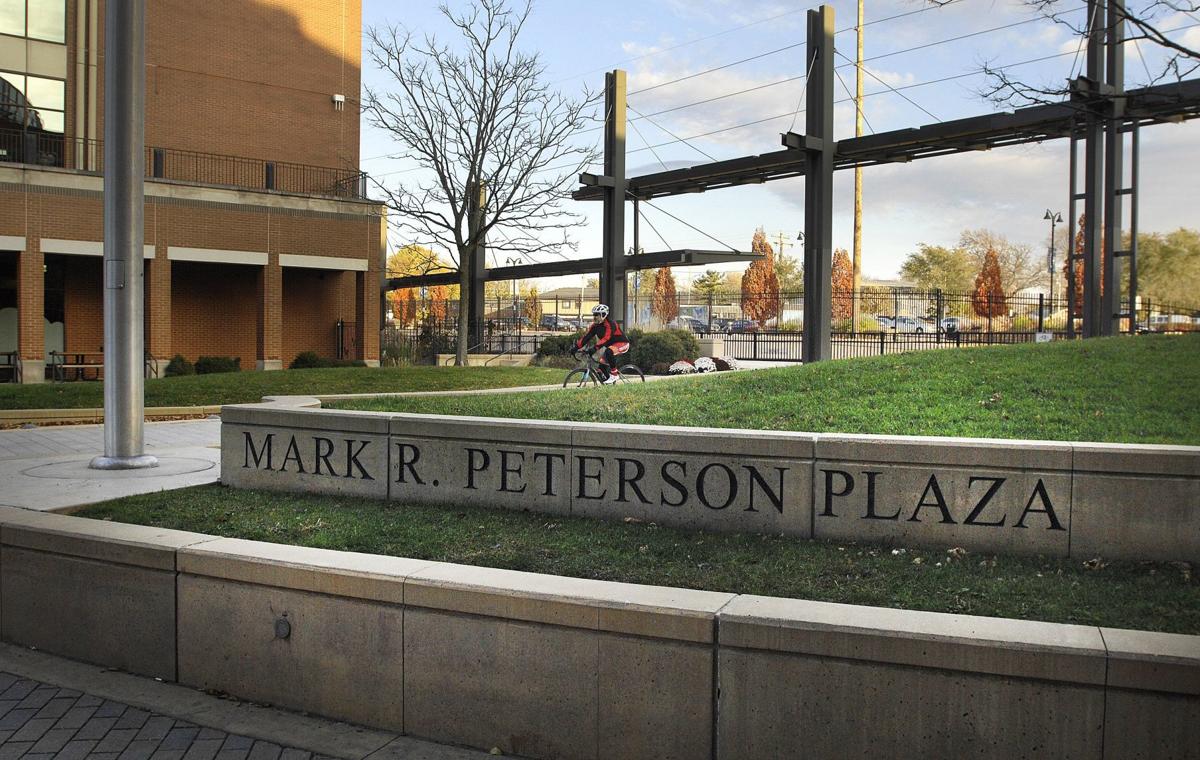 A bicyclist passes the railroad tracks at Uptown Station in Normal in an area that will be the site of a pedestrian underpass below the thoroughfare. Officials announced a $13 million federal grant to go toward the tunnel.

This graphic displayed Thursday at a public meeting at Uptown Station describes the advantages of a railroad underpass with park and plaza in uptown Normal.