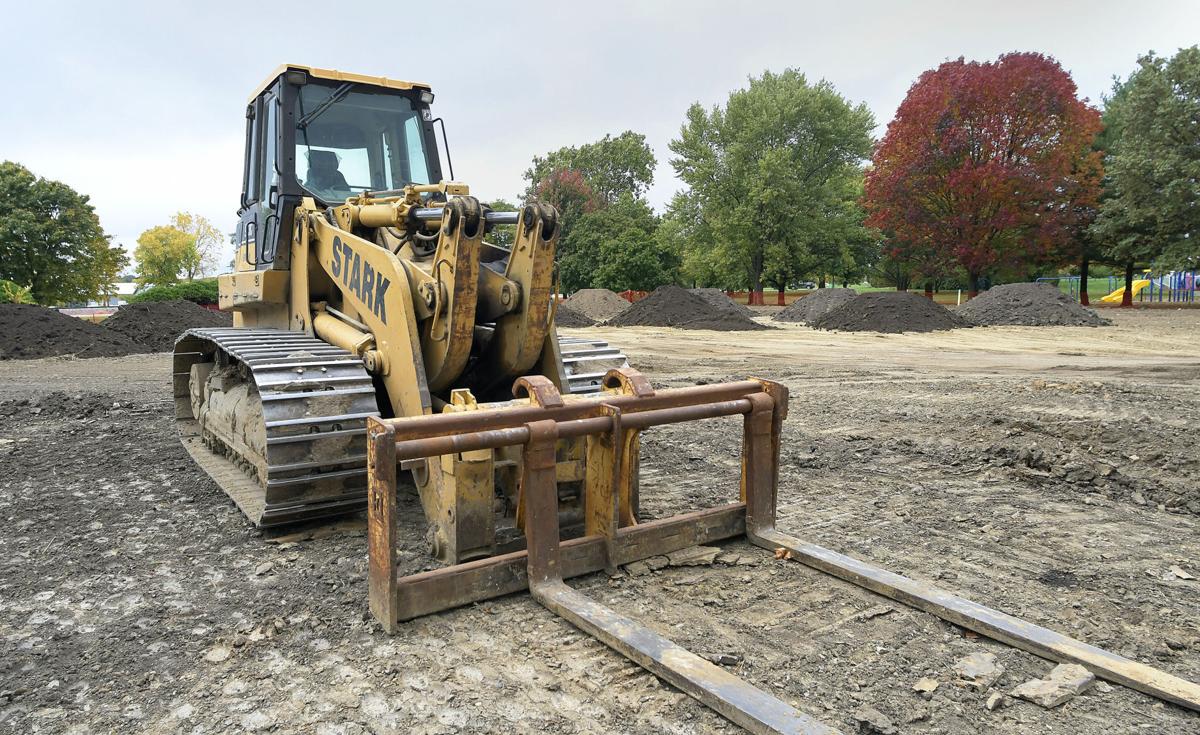 Equipment sits on the site of the former O'Neil Park swimming pool on Oct. 12, 2020. 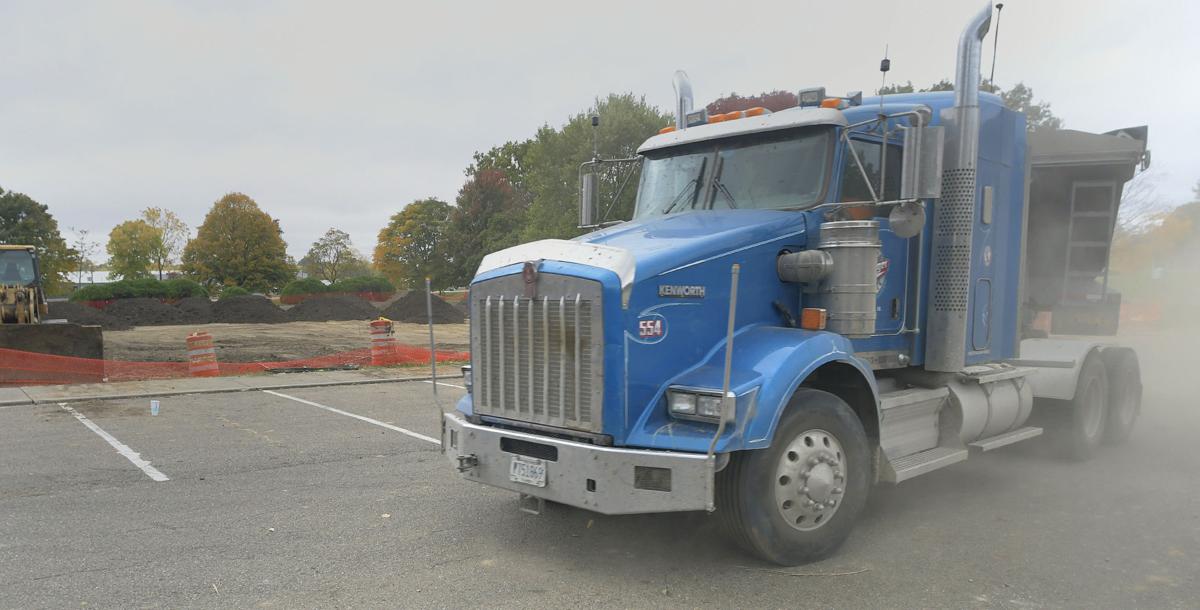 A semitrailer truck drives by the site of the former O'Neil Park swimming pool in October on Bloomington's west wide. 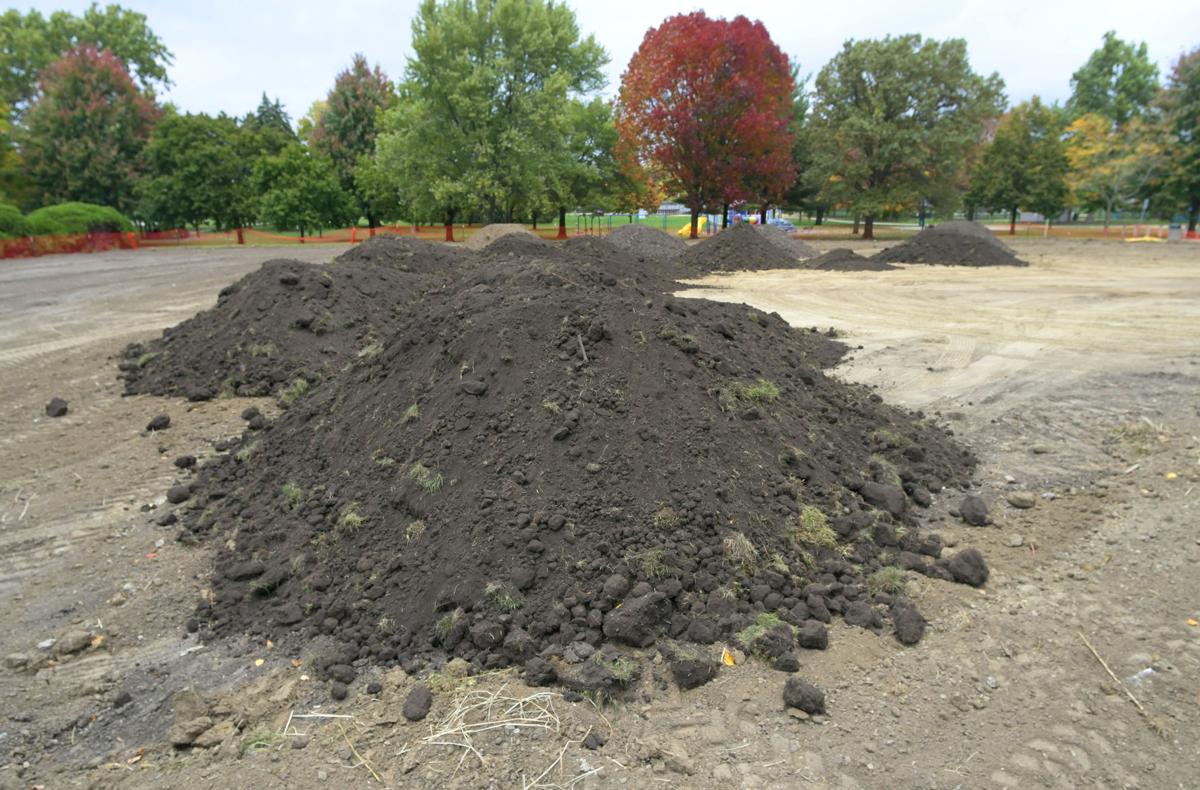 Mounds of dirt will finish leveling the site of the former O'Neil Park swimming pool, Monday. The Bloomington City Council is moving ahead with a plan that would see construction for a new water park begin next year.

BLOOMINGTON — Design work for the aquatic center on the site of the O'Neil Park Pool can soon begin.

Council members on Monday approved a $775,000 contract with Williams Architects for design and construction management services. The Itasca company was chosen out of 14 firms that submitted qualifications to handle designing the new aquatic facility that will replace the 1515 W. Chestnut St. pool.

Money for the design work comes out of the city's capital improvement fund. While the amount is $37,000 higher than originally designated for the design work, Jeff Kohl, parks project manager, said that other budgeted projects had been put on hold and pared down.

Council also Monday approved a $194,998 contract with P.J. Hoerr Inc., for construction of a building that would house vehicles and other large pieces of evidence.

The building would be built within the police training facility near Arrowsmith on the site of the "lodge," which was used for storage. The building was demolished earlier this year because it deteriorated to the point that it was no longer usable, according to city documents.

Interim Police Chief Greg Scott said evidence such as firearms would continue to be stored in a vault at the Bloomington Police Department.

Also approved was a $1.3 million project to extend Constitution Trail.

Two extensions are outlined in the project, including extending the trail from Lincoln Street to Bunn Street along the Norfolk Southern Railway, and then along Bunn Street to Hamilton Road.

The measure is part of an application seeking $1,041,228 in funding through the Illinois Transportation Enhancement Program. 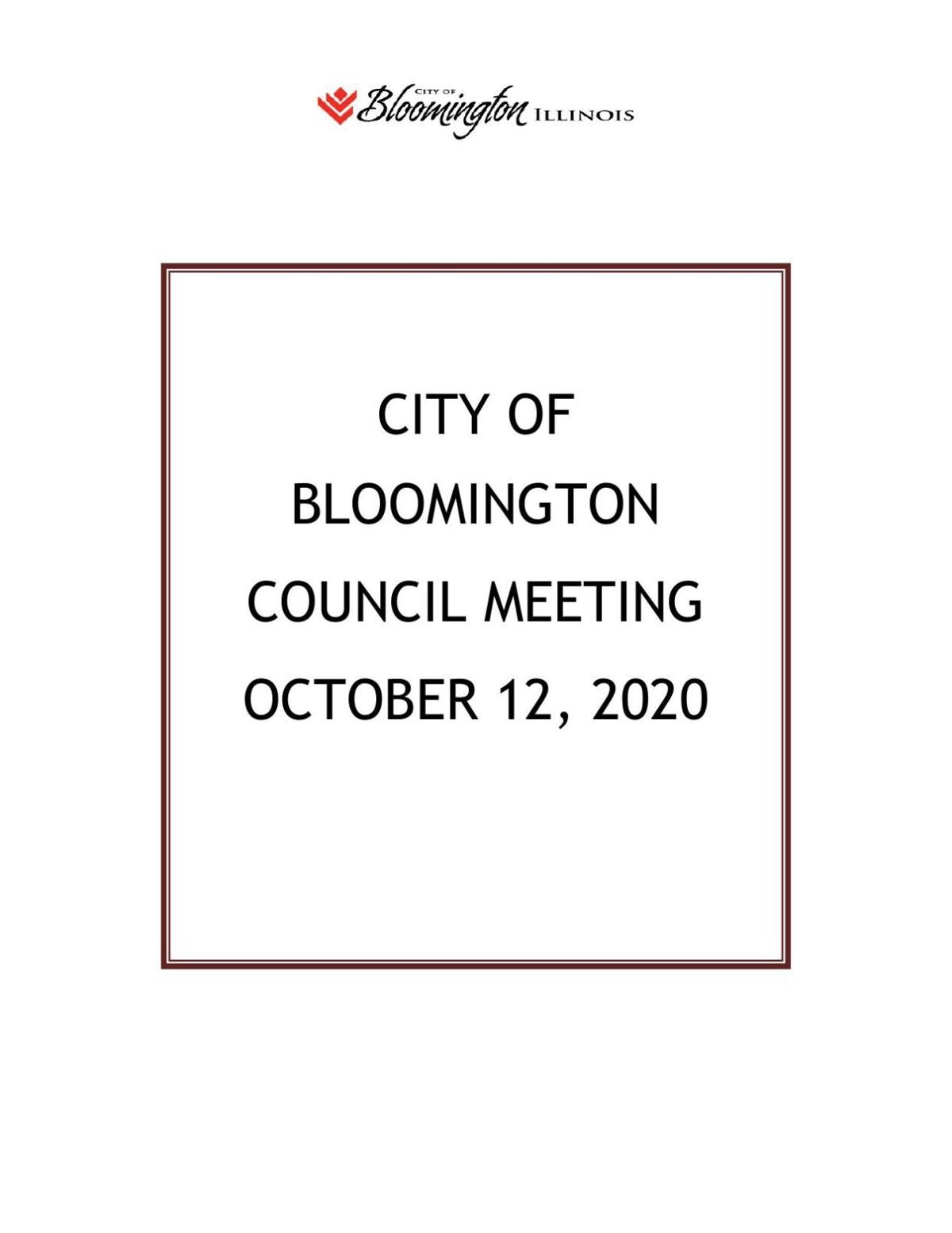 Ward 8 Ald. Jeff Crabil said he has some concern over the potential cost due to the economic impact of COVID-19. He said having the extra step of approval if the city receives the grant made him comfortable with voting for the resolution Monday.

Because of the grant requirements, the portion of the trail between Lincoln and Lafayette streets would be completed as a "planned, future, locally funded project," officials said.

A planned future segment would complete the "backbone" that connects the south and west sides of the city.

Ward 7 Ald. Scott Black also Monday confirmed his last day with the council would be Oct. 31. Residents interested in filling the vacancy for the remainder of Black's term should contact Mayor Tari Renner by Oct. 16. Black's term was set to expire in April 2021.

A Friday the 13th prank

Target and Starbucks will not require masks for fully vaccinated customers

Target and Starbucks will not require masks for fully vaccinated customers

Many workers won't return to old jobs after COVID

Many workers won't return to old jobs after COVID

Ward 7 Alderman Scott Black will resign from the city council later this month.

Art and Camille Taylor of Bloomington and Susan Hoblit of Atlanta have been named 2020 Philanthropists of the Year by the Illinois Prairie Community Foundation.

No arrests have been announced in the fatal shooting that occurred in the 1600 block of Iowa Street in Bloomington on Monday.

20 Bloomington-Normal restaurants we wish would come back

What should the new O’Neil Park and Pool feature? Here's your chance to offer input

Demolition on the 46-year-old pool began in September. The council approved a contract for $138,526 with Stark Excavating to demolish the pool.

City officials unveiled Thursday a first draft of the new aquatic facility that could replace the O'Neil Park and Pool, stressing that the final design will reflect public input, but remain limited by funding.

Bloomington park officials on Monday will formally recommend their plan for the new aquatic facility to replace the O'Neil Pool and other improvements to the park.

City parks officials showcased Monday their preferred vision for the rehabilitation of the O'Neil Pool and Park, explaining the project now carries a price tag of up to $11.7 million.

Equipment sits on the site of the former O'Neil Park swimming pool on Oct. 12, 2020.

A semitrailer truck drives by the site of the former O'Neil Park swimming pool in October on Bloomington's west wide.

Mounds of dirt will finish leveling the site of the former O'Neil Park swimming pool, Monday. The Bloomington City Council is moving ahead with a plan that would see construction for a new water park begin next year.