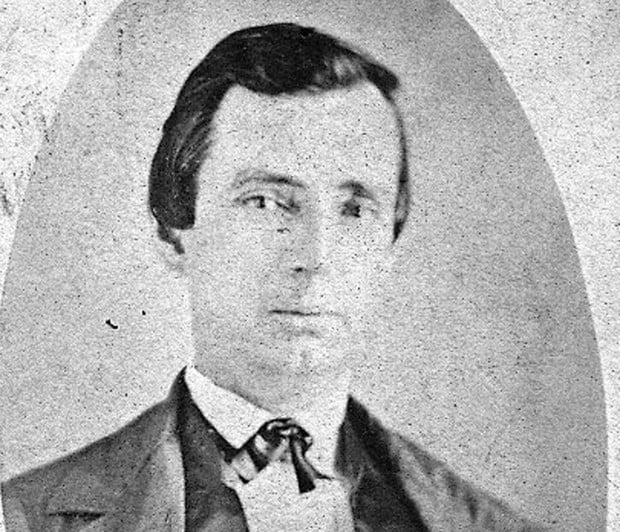 “Dr. Hobbs (in an undated photo) was always clean shaven,” reads one reminiscence. “His abundant hair was raven black. Time made but few inroads on his smooth skin and few men of his years looked so young as did he.” (Courtesy of the McLean County Museum of History) 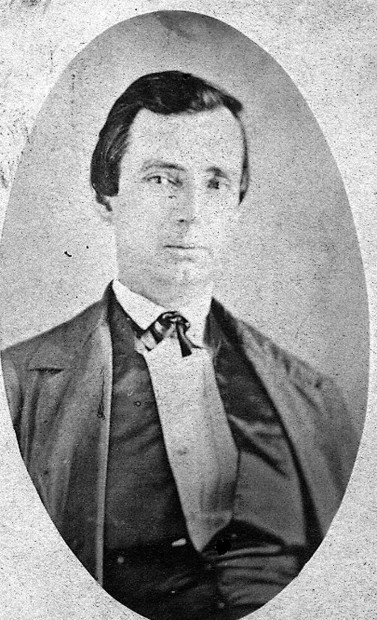 BLOOMINGTON — Early Bloomington was filled with delightfully eccentric characters, none more so than Dr. William C. Hobbs, a dandified gentleman who, by having the ear of high society types, served as local authority on all matters womanly — from the latest in fashionable dress to the proper staging for the season’s biggest wedding.

Little is known of Hobbs before he arrived here in the late 1830s. He was born in Maryland in 1800 and might’ve received some schooling at Georgetown in Washington, D.C. He was thus educated, if not raised, Catholic (though in Bloomington he was an active member in the Methodist and later Episcopal churches).

He tried his hand at “tooth carpentering” (an all-too-evocative name for 19th century dentistry in all its painful crudity), but couldn’t make it pay, perhaps due to the fact that his preferred method of extraction involved twisting as opposed to the less-involved “one good yank.” Not all was a loss, though, for he kept the title of doctor the remainder of his life.

Although Hobbs first made a name for himself in Bloomington as an educator, establishing a private school that reflected the peculiarities of its founder, he was best known around these parts as “the prime mover of all things social.”

“Hardly any lady could buy a dress or a bonnet or a ribbon without consulting Dr. Hobbs, as to whether or not it was becoming,” recalled Dr. Laban Shipp Major. “He was at every ball, wedding and funeral. When he attended a party of any kind the lady of the house never dared to pass the cake before submitting it to him for inspection. He would break off a small piece and taste it and say in his ceremonious way, ‘Very good indeed, but it is a little too sweet’ or ‘Not quite enough flour.’”

This was no exaggeration, for other reminiscences paint a markedly similar portrait. “He was the sole authority, from whose decision none ever presumed to take an appeal, upon every social question,” noted Charles L. Capen. “The laws of etiquette in his little empire were fixed by him.”

In many ways, Hobbs was a stranger in a strange land. “Whilst other citizens dressed in blue jeans, tow linen and linsey woolsey (common coarse materials of the frontier), he wore broadcloth, silk vests, immaculate linen and silk-lined cloaks,” recounted James S. Ewing.

Of Hobbs and vests, much ink was spilled. “He had a positive mania for black satin vests, and invested in a new one every month regularly,” remembered Ann Scott. She noted further that Hobbs “used perfumery so odorous that his friends said of him that they could tell of his approach as far away as three blocks.”

Interestingly, Hobbs’ idiosyncratic fascination with the feminine side of society didn’t affect his standing in the community.

In fact, he would go on to play an instrumental role in establishing a strong freemasonry presence in Bloomington, finding a welcome home in the manly man’s world of secret fraternal societies.

Hobbs wore a white hat with a black crepe mourning band said to honor a fiancé from back East who died before their wedding. This tragic narrative of lost love, whether true or not, afforded Hobbs a readymade explanation for his perpetual bachelorhood.

His interest in the temperance movement apparently sprang from this heartache, for in his sorrow he turned to the bottle and lost a fortune, arriving in Bloomington a wounded but recovering soul.

Regardless of the reliability of this (admittedly convenient) story, Hobbs combated the real and perceived evils of alcohol through his membership in the Washingtonians, an influential temperance society, as well as the secretive Sons of Temperance.

He spent his final years as the elected clerk of McLean County, a clear indication that he was well-liked by fellow residents. Bloomington’s “arbiter elegantarium” died Feb. 10, 1861, at his bachelor’s quarters in the McLean County Bank, located at the corner of Main and Front streets (the building now serves as offices for attorney David Dorris).

Hobbs is one of eight featured characters in this year’s Evergreen Cemetery Discovery Walk, the McLean County Museum of History’s popular annual program running the next two weekends. Tours will be 11 a.m. and 2 p.m. Sept. 29-30 and again Oct. 6-7. Call the museum at 309-827-0428 for details.

Of Hobbs, perhaps James Ewing said it best, noting that the good doctor “died leaving no enemies, a good many debts, and twenty-seven satin vests.”

On Texas visit, Biden warns Iran 'to be careful'

On Texas visit, Biden warns Iran 'to be careful'

It was always ‘Happy Hour’ with wholesaler

BLOOMINGTON — Over his long life, Campbell Holton witnessed monumental changes in his chosen profession — the buying and selling of groceries.…

Of the 44 presidents in U.S. history, we know of 17 who passed through McLean County, from Millard Fillmore (the 13th president) to Barack Oba…

“Dr. Hobbs (in an undated photo) was always clean shaven,” reads one reminiscence. “His abundant hair was raven black. Time made but few inroads on his smooth skin and few men of his years looked so young as did he.” (Courtesy of the McLean County Museum of History)