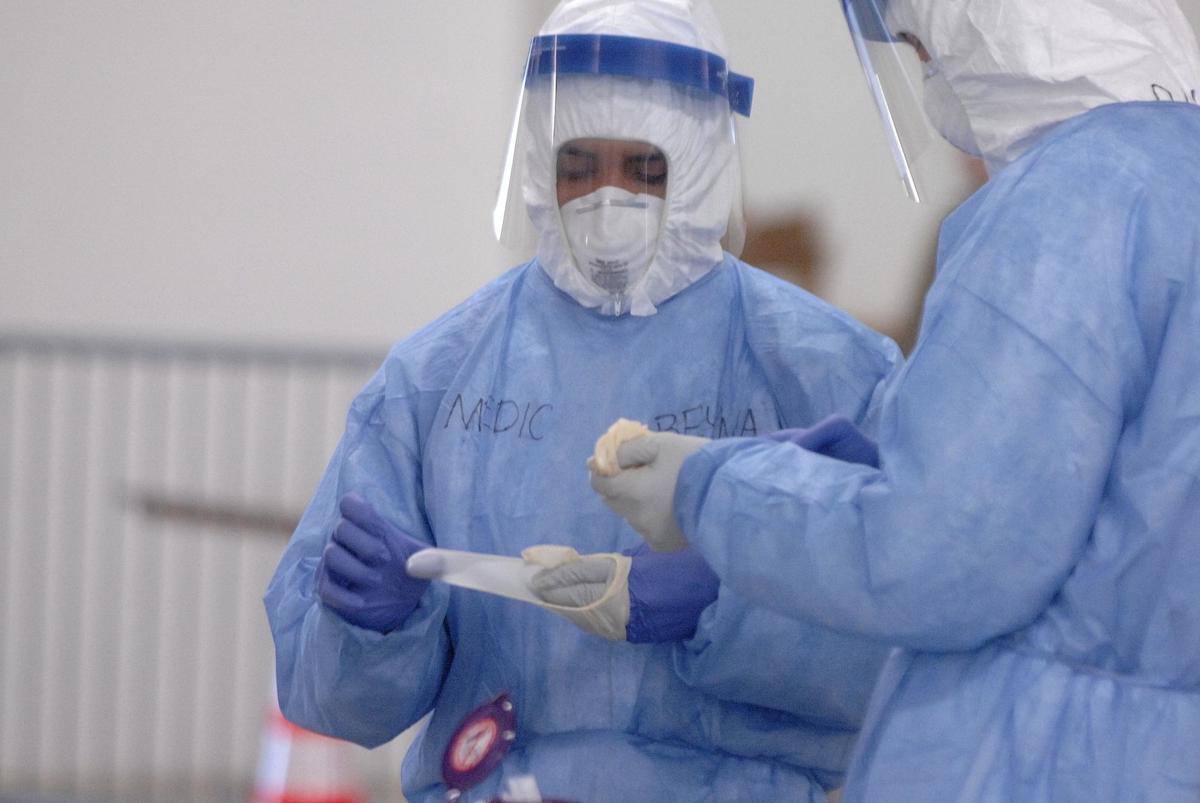 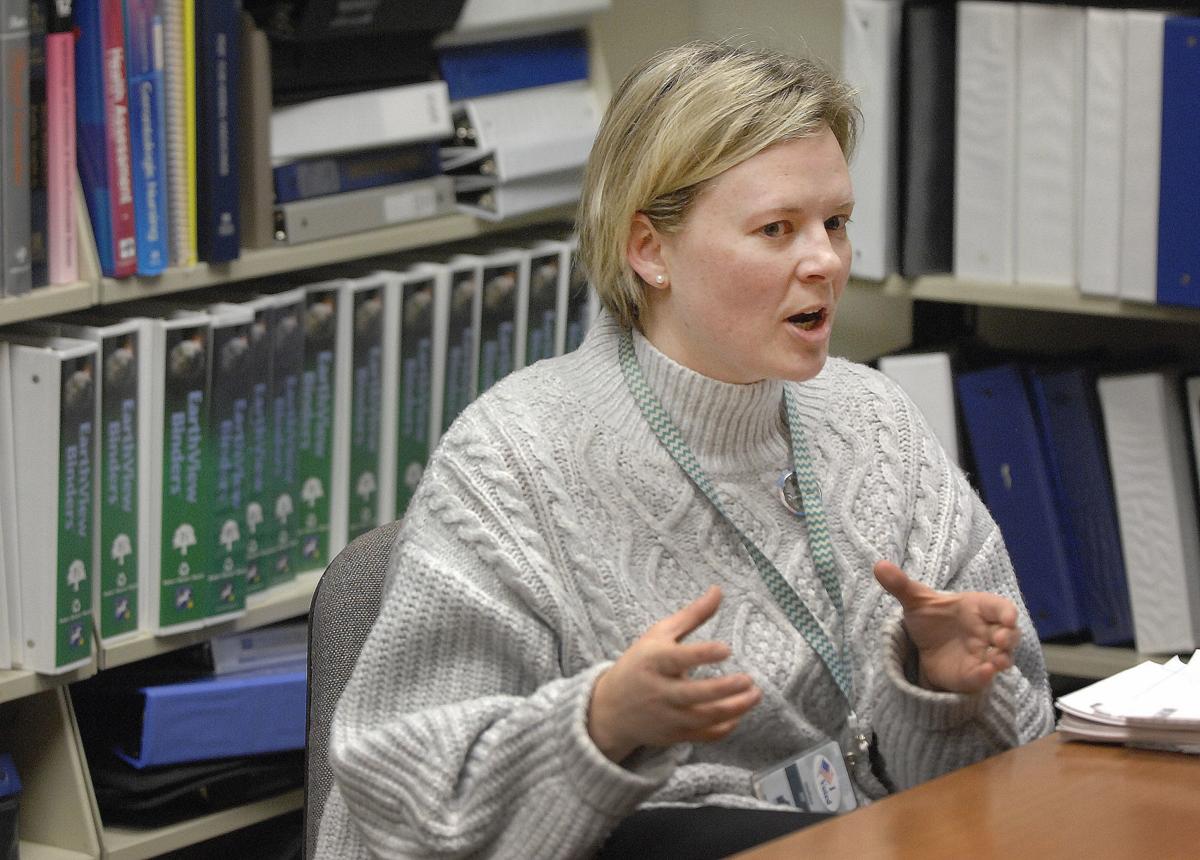 Melissa Graven, communicable disease supervisor at the McLean County Health Department, discusses COVID-19 on Wednesday, March 18, 2020. She said on April 3 "Assume anybody you are in contact with has COVID-19."

BLOOMINGTON — McLean County health officials warn residents should be braced for many more cases of COVID-19, even as county numbers jumped by four on Monday to 17 confirmed cases.

"This increase is the tip of the iceberg," said Melissa Graven, county health department communicable disease supervisor. "This increase isn't necessarily surprising to us."

The health department is trying to determine where the four people may have been exposed and to talk with people who have been in recent close contact with them, Graven said.

Two of the four were recently at a small gathering at a private residence, she said.

None of the 17 cases were identified from drive-through testing that began Saturday at the McLean County Fairgrounds, 1106 Interstate Drive, Bloomington, Graven said.

"We've not seen (test) results coming back (yet) from the fairgrounds," Graven said.

Seven of the 17 patients are hospitalized, with four in intensive care units, Graven said. The remaining are self-isolating at home.

"We have several pretty darn close to being recovered," meaning they will no longer need to self-isolate, Graven said.

Meanwhile, LaSalle County Health Department confirmed on Monday a fifth resident had tested positive for COVID-19. The man in his 60s had been hospitalized but was recovering at home in isolation on Monday, that county's health department said.

Ford County reported its first case, a man in his 70s who is hospitalized. The health department is contacting all people who have been in close contact with him recently.

A county's number of cases is determined by a person's county of residence, said Dion McNeal, McLean County communications specialist. Over the weekend, DeWitt County initially said it had a case, but changed that information to zero after determining the patient - a college student who lives in Missouri - had not been in the county since Christmas.

McLean County Health Department had been reporting numbers of people tested and how many had tested negative. But McNeal said that while positive cases would continue to be reported, reporting the number of tests has stopped for two reasons. The county no longer has an accurate number of people being tested, as some people are being tested at private labs which only report positive cases, and some people being tested at the fairgrounds live outside McLean County.

Melaney Arnold of the Illinois Department of Public Health told The Pantagraph that 78 people were tested at the fairgrounds' test site on Saturday and 108 were tested on Sunday.

But Arnold said "We anticipate this number will grow as more people become aware of the site."

Testing will continue at the fairgrounds 9 a.m. to 5 p.m. daily until supplies are exhausted. Testing is for first responders, health care providers, people 65 and older and people with underlying medical conditions who have a fever, cough, sore throat or shortness of breath.

Other people with symptoms are asked to stay home and self-isolate and call their health care providers if their symptoms don't improve.

In his daily press briefing about the novel coronavirus disease outbreak Monday in Chicago, Gov. JB Pritzker said the state’s third shipment of relief supplies from the feds arrived Sunday, but likely includes 300,000 surgical masks instead of the N95 respirator masks Illinois requested.

“While we do not have a final count on this yet, I can say with certainty that what they sent were not the N95 masks that were promised, but instead were surgical masks, which is not what we asked for,” Pritzker said.

Made of thin fabric and held loosely onto the face, surgical masks do not provide as much protection against COVID-19 as N95 masks, according to the U.S. Centers for Disease Control and Prevention.

Along with packets of remote learning materials, some students in Unit 5 received food, school supplies and hygiene items for themselves and their families on Monday.

Firefighters are pouring water into sewer drains of some houses along the 400 block of West Graham Street Tuesday afternoon, where vapors related to a sewer relining project have created noxious odors. 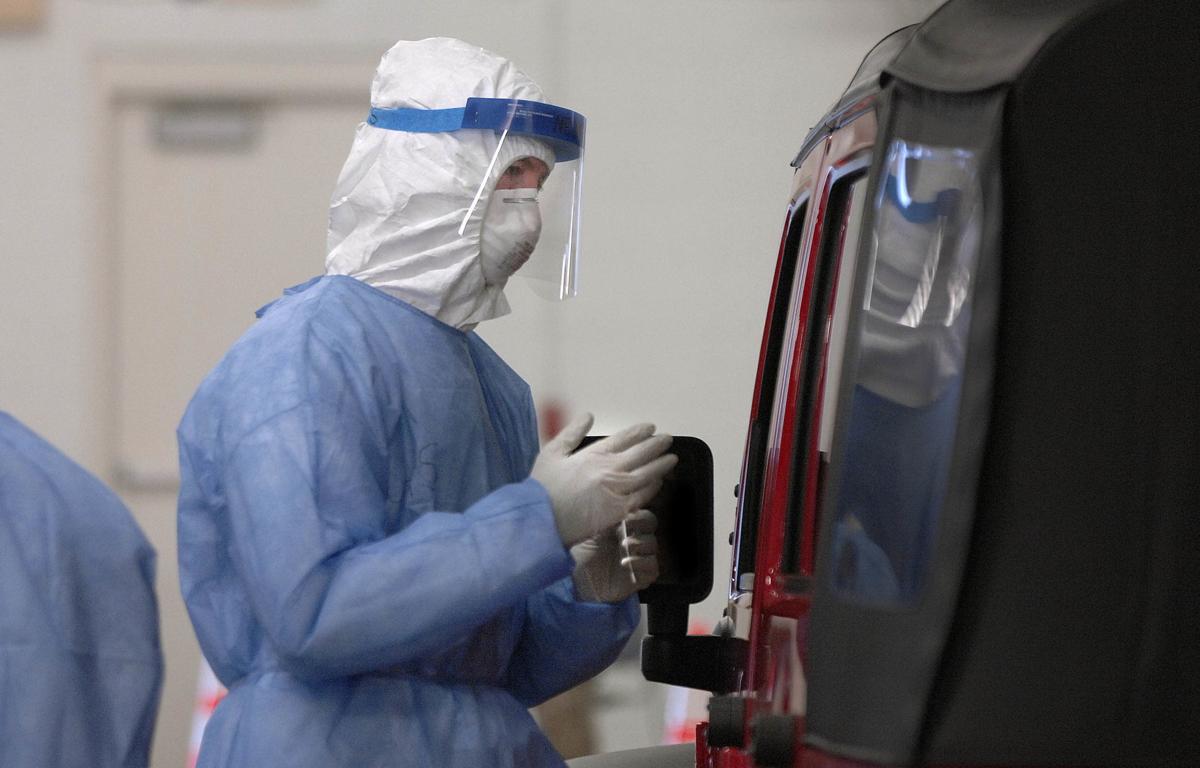 An Illinois National Guardsman explains to a person who wants to be tested for  coronavirus how he will use a nasal swab to obtain a sample for analysis during the drive-through testing on March 28, 2020, at the McLean County Fairgrounds. The guardsmen are assisting at the testing site.

Melissa Graven, communicable disease supervisor at the McLean County Health Department, discusses COVID-19 on Wednesday, March 18, 2020. She said on April 3 "Assume anybody you are in contact with has COVID-19."