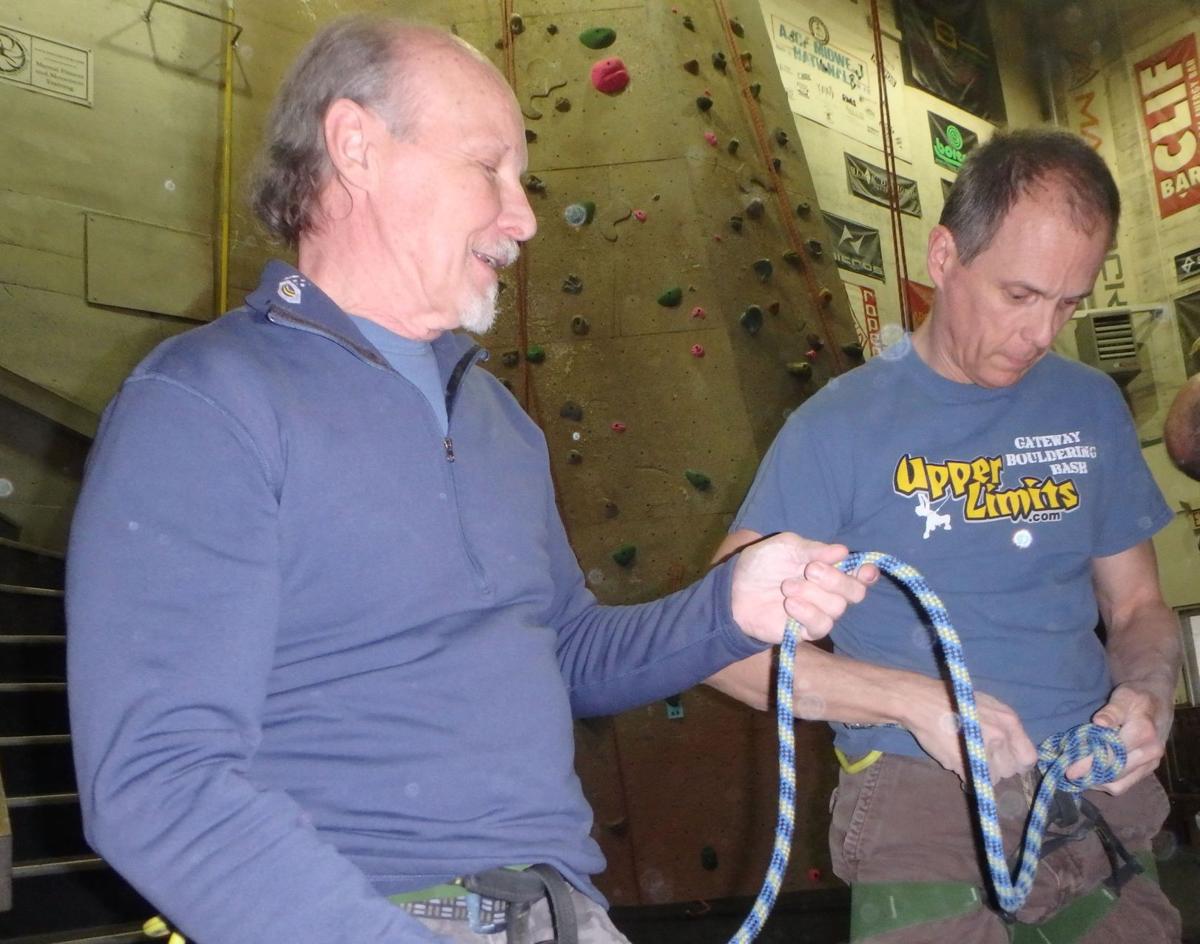 Roger Jebe holds the rope as his son, Tod, ties it into his harness before ascending a route at Upper Limits rock climbing gym in Bloomington. The father and son climb regularly together. 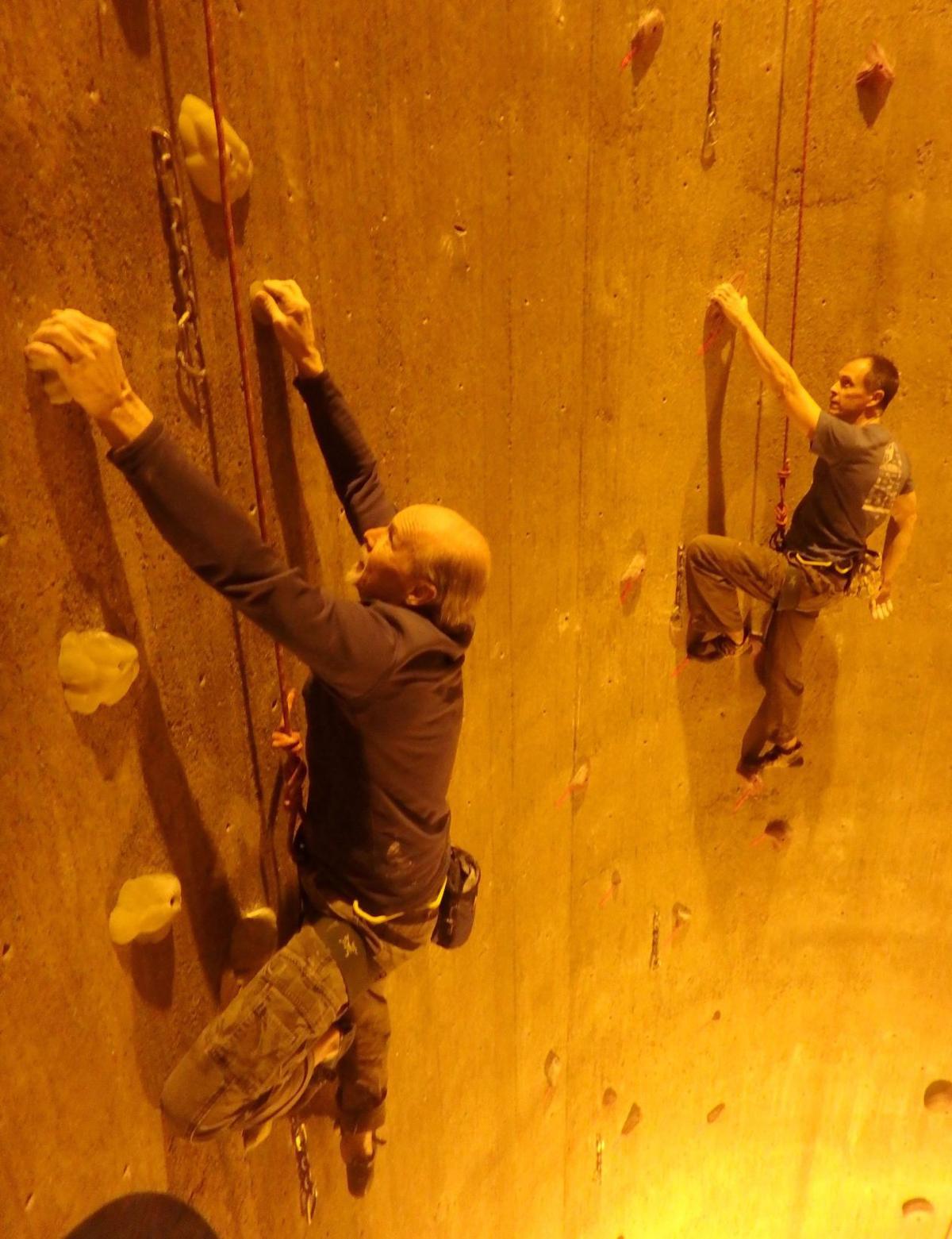 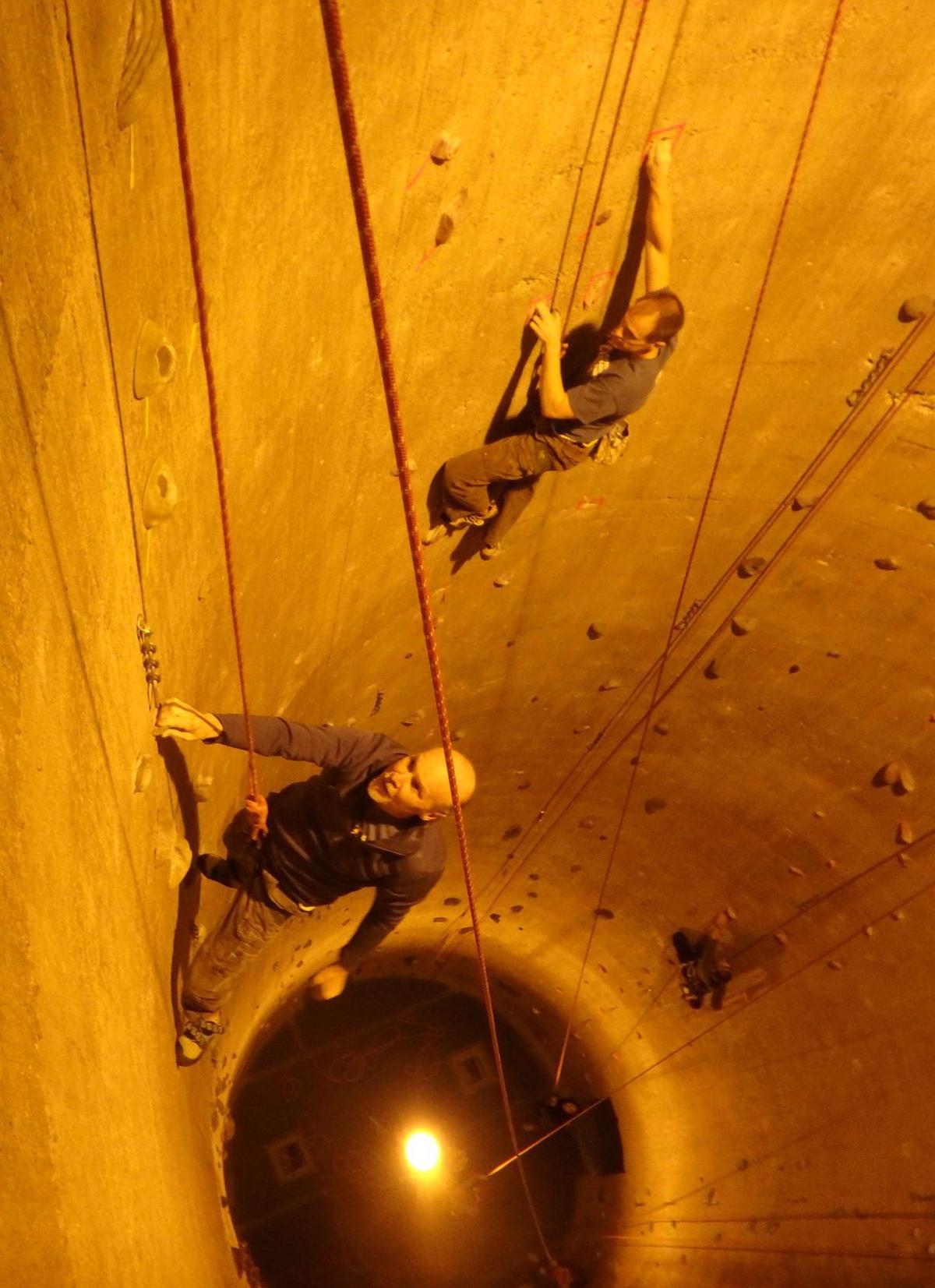 Roger Jebe, left, and his son, Tod Jebe, near the top of their routes at Upper Limits rock climbing gym in Bloomington. 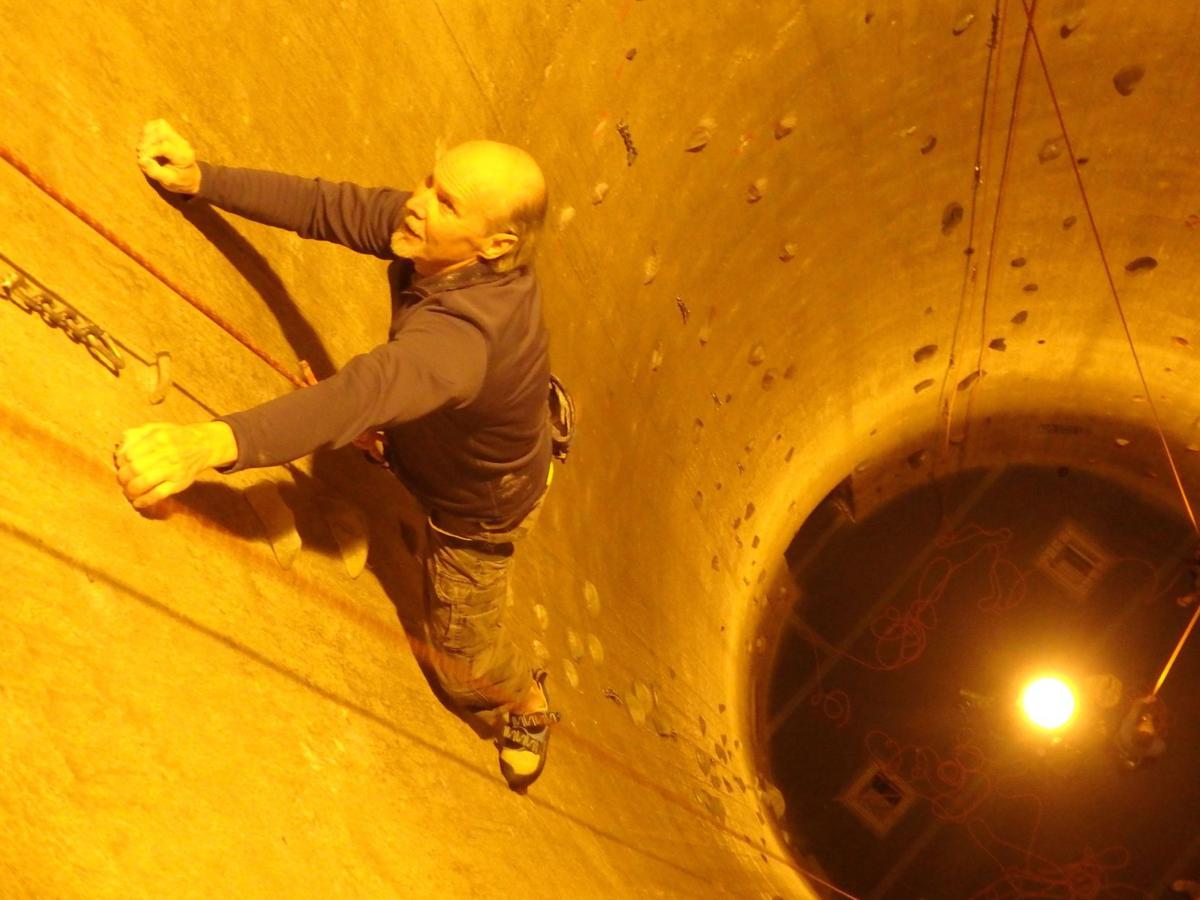 Roger Jebe works his way up a 65-foot climbing route inside a converted grain elevator at Upper Limits.

BLOOMINGTON — Roger and Tod Jebe aren't just defying gravity at Upper Limits Climbing Gym, they are defying stereotypes of when someone is “too old” to enjoy certain activities.

And, in Roger Jebe's case, he is defying medical odds, coming back from life-threatening blood clots that barely slowed him down.

“Roger's the man,” said Brendan Sheedy, an assistant coach for the gym's youth climbing team. “He's an inspiration to all of us.”

A competitive cyclist, Roger Jebe didn't start climbing until he was 60.

Now 72, he and his 51-year-old son, Tod, continue to climb regularly at the gym on Bloomington's west side, with Roger driving from Oreana and Tod driving from Monticello.

“Roger and Tod are our dynamic duo,” said climbing partner Laura Coen of Bloomington. “They are magicians on the wall.”

Tod Jebe said he likes “the combination of the problem-solving and physical aspects” of climbing.

In addition, Roger Jebe said, “One of the things that really draws me is the people. They talk to you.”

He and his son used to race bicycles together. In fact, they've been sharing various sports together since Tod got out of high school.

Then, one day, when Roger took his granddaughter — Tod's daughter — to a volleyball class in Decatur, he noticed a climbing wall in the gym.

He and his son took a class and “we got hooked like climbers do and pretty soon we were driving up here (to Bloomington) twice a week,” he said.

Roger joked that “Tod gets overshadowed” by the attention paid to Roger's climbing at age 72.

On the day he turned 50, Tod Jebe set a goal of climbing at least 50 routes in a 12-hour climbing competition at an Upper Limits gym in St. Louis.

It was health problems that almost called “time” for his dad.

Last May he noticed he was having trouble catching his breath. It got so bad at the top of one climb, Jebe said, “I thought I was having a heart attack or stroke or something. … But I went ahead and climbed the rest of the night.”

When he went to a doctor, after prodding from his son and others, blood clots were found in his heart, lungs and legs.

Doctors performed procedures to dissolve the clots and placed filters in his veins below his kidneys to “catch” any other clots, he explained.

He was in the hospital for a week and told to take it easy for six months. He was back to climbing in two months.

Roger Jebe said the health problems left him “out of shape. … I'm not doing much aerobically since.”

But “out of shape” for Roger Jebe is still well ahead of the “typical” 72-year-old.

Steve Wall of Bloomington called Roger “inspirational” and said his fitness routine “cracks me up.”

Wall, who regularly climbs with Roger, will ask him what he's done that day and Roger will say he's done 100 pull-ups and a 15- or 20-mile bike ride “and then he comes and climbs,” said Wall, shaking his head. “He gives you hope that you can keep doing physical exercise.”

“They are great people,” Gayle Hess of Bloomington said of the Jebes. At age 52, Hess said climbing with the pair “takes away my excuses. I can't say, 'I'm too old.'”

Roger Jebe said the key is “you just have to keep going” and when injuries happen, “you can generally work through it, adapt or find another sport.”

Asked for his advice for staying active at an age where others back off, Tod Jebe said, “You've got to do something that's fun, that you enjoy. And you've got to keep the intensity up.”

As the AARP-eligible group climbed, they were surrounded by chattering members of the youth team on their practice night, but no one seemed to mind.

The two diverse age groups seem to feed off each other.

“I tell the kids on the team they need to do what Roger and Todd do,” said coach Sheedy, referring to the push-ups and lunges they do between climbs. “Nobody on the team — nobody in the gym — tries as hard as they do.”

NORMAL — A kaleidoscope of colorful artificial “rocks” are making a mountain out of a former grocery store.

BLOOMINGTON — You might say rock gyms are climbing to new heights.

Roger Jebe holds the rope as his son, Tod, ties it into his harness before ascending a route at Upper Limits rock climbing gym in Bloomington. The father and son climb regularly together.

Roger Jebe, left, and his son, Tod Jebe, near the top of their routes at Upper Limits rock climbing gym in Bloomington.

Roger Jebe works his way up a 65-foot climbing route inside a converted grain elevator at Upper Limits.