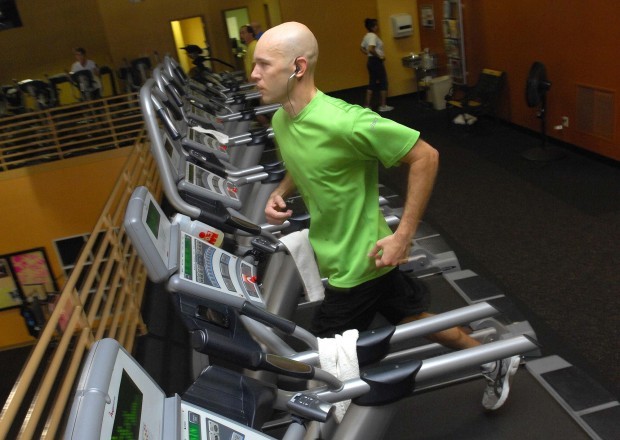 Dan Seaway runs in preparation for a record breaking attempt for the most miles run a treadmill, Monday, Aug. 20, 2012 at Gold's Gym. (The Pantagraph, David Proeber) 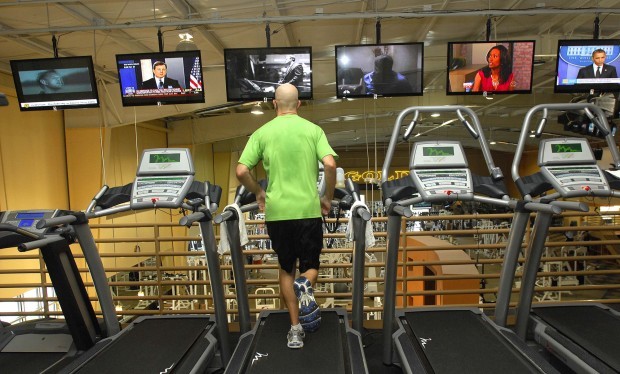 Dan Seaway runs opposite a wall of televisions as he prepares for a record breaking attempt for the most miles run a treadmill, Monday, Aug. 20, 2012 at Gold's Gym. (The Pantagraph, David Proeber) 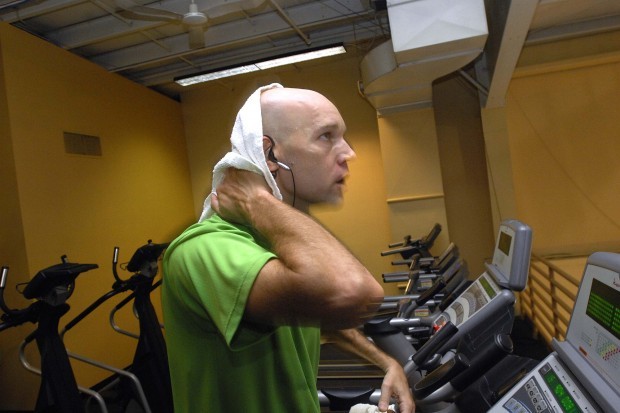 Dan Seaway pounds a treadmill as he prepares for a record breaking attempt for the most miles run on the machine, Monday, Aug. 20, 2012 at Gold's Gym. (The Pantagraph, David Proeber)

BLOOMINGTON — Ever since he was a kid, Dan Seaway wanted a Guinness world record.

“I always wanted to be in the book,” he said, recalling childhood moments paging through the Guinness book “and reading about all the crazy records. I finally found something I can do.”

“People ask ‘Why are you doing this? Are you crazy?’ Well, you’ve got to be a little off balance to try something like this,” said Seaway, perspiring after completing a run this week at Gold’s, where he is a personal trainer.

“If it was easy, you would see more people doing it.”

“I like to challenge myself. It’s me versus the clock.”

Last year, he came across the treadmill record, figured he could break it, submitted an application to Guinness World Records and decided to use his effort to raise money for St. Jude Children’s Research Hospital in Memphis, Tenn. Several months later, Guinness notified him that his application had been accepted but he needed to follow their rules.

“I didn’t think he was serious,” said Adam Cameron, Seaway’s friend and occasional training partner. “I thought he was spouting off. Then I told him ‘Good, go for it. I’m not running for 12 straight hours, so have a good time.’”

“If anybody can run a lot of miles on a treadmill for 12 hours, it would be Dan Seaway,” said Mike Trotter, Gold’s director of personal training. “He does triathlons and marathons, so this is right up his alley.”

Seaway began training several months ago. “I’m always running so there wasn’t much of a transition,” he said.

On Sundays, he runs four to five hours on a treadmill at Gold’s and then does light weight training. On the other six days, he runs or rides his bike outside for three hours a day.

“I’m single. I have all the time in the world,” he explained with a smile.

For nutrition, he has been eating lean red meat, chicken and tuna, and fruit, vegetables and pasta.

The 6-foot-tall, 143-pound runner knows he will burn 900 to 1,000 calories each hour during his effort on Monday, so he plans to consume 500 calories per hour of sports drinks, protein shakes, fruit and peanut butter and jelly sandwiches. The balance is to take in enough healthful food to replace some calories and maintain his energy without filling up so much that it bogs him down.

For each of the 12 hours, Seaway plans to run a 6-mph pace for the first five minutes, a 7-mph pace for the next 53 minutes and then take a two-minute break to stretch and use the restroom. Breaks are allowed but the clock keeps ticking.

Seaway and Trotter know the mind game may be the hardest part. “They’ll be that voice in his head saying ‘Stop,’” Trotter said.

To deal with that, Trotter has invited family from across the country to join him on Monday and he hasn’t talked with them recently so they’ll have a lot to discuss during his record attempt. He also has recorded all sorts of music on his iPod.

His family and friends will be among witnesses during his effort. Among Guinness rules are Seaway must make sure the treadmill is properly calibrated, must have at least two witnesses at all times, can’t hold onto the side of the treadmill and all 12 hours must be videotaped.

Is all this worthwhile?

“To be able to say — even if it’s just for one brief moment — that I’m the best at something would be fantastic.”

How to help: Anyone who comes to Gold’s during Seaway’s attempt to support him and to donate money to St. Jude will not have to pay a guest fee. For anyone who joins Gold’s on Monday, the enrollment fee will go to St. Jude.

Bond has been set for a Bloomington man who was held in custody last week on an aggravated domestic battery charge.

Jennie Garth, alumnus of such TV favorites as “Beverly Hills 90210” and “What I Like About You,” has in more recent days gotten countless kudos from all across Central Illinois. One of Garth’s biggest fans, though, is her sister, who still lives in the Prairie State.

The first Wednesday afternoon is under investigation.

Lexington schools were put on lockdown Wednesday morning, but district officials said after an investigation they determined the campus was safe.

The first-dose opportunities follow a spate of several second-dose-only clinics.

Dan Seaway runs in preparation for a record breaking attempt for the most miles run a treadmill, Monday, Aug. 20, 2012 at Gold's Gym. (The Pantagraph, David Proeber)

Dan Seaway runs opposite a wall of televisions as he prepares for a record breaking attempt for the most miles run a treadmill, Monday, Aug. 20, 2012 at Gold's Gym. (The Pantagraph, David Proeber)

Dan Seaway pounds a treadmill as he prepares for a record breaking attempt for the most miles run on the machine, Monday, Aug. 20, 2012 at Gold's Gym. (The Pantagraph, David Proeber)